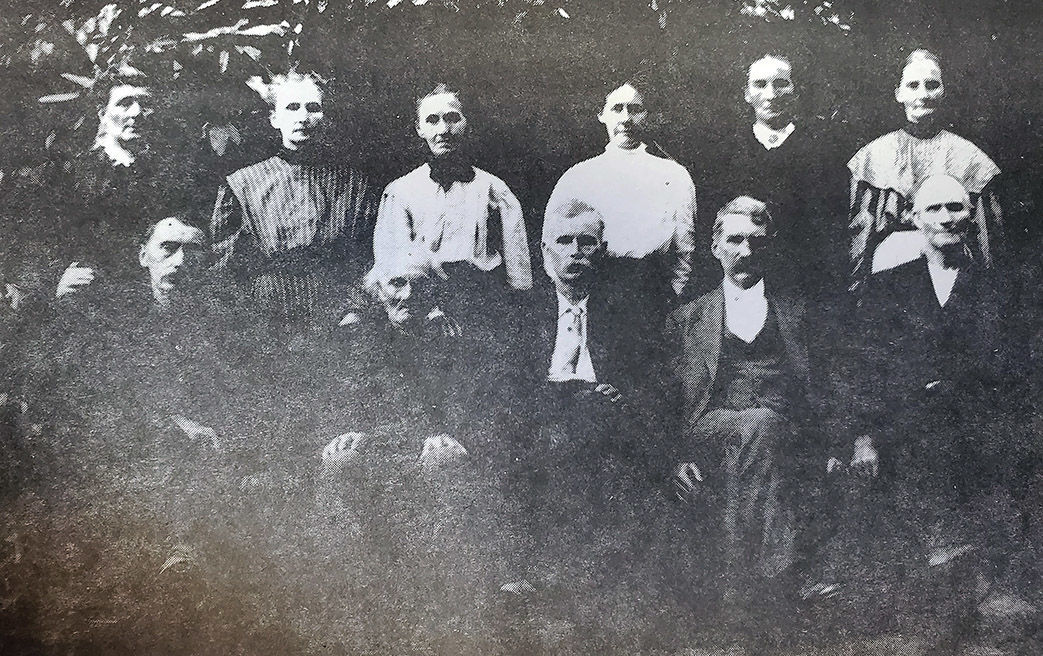 Uncle Berry Denton, seated second from left, is shown with children from his second marriage. At the time of this photo, he was married to his much younger third wife and they had a son, John Delozier Denton, who would have been about 18 years old. 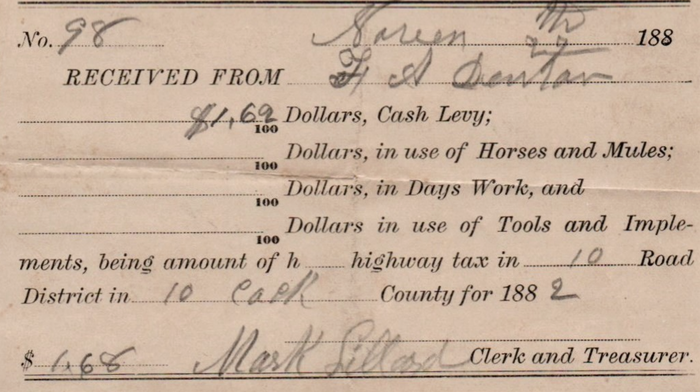 A receipt from 1882 shows Grandpa Denton paid his road tax for the year.

In 1866, a year after the American Civil War ended, Grandpa Denton’s land taxes jumped to nearly $10. 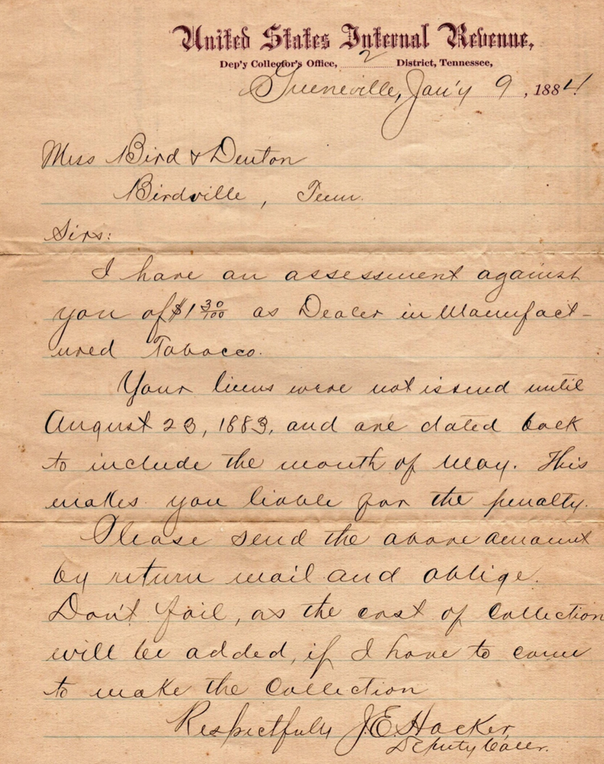 In 1884, Grandpa Denton had trouble concerning the Internal Revenue.

Uncle Berry Denton, seated second from left, is shown with children from his second marriage. At the time of this photo, he was married to his much younger third wife and they had a son, John Delozier Denton, who would have been about 18 years old.

A receipt from 1882 shows Grandpa Denton paid his road tax for the year.

In 1866, a year after the American Civil War ended, Grandpa Denton’s land taxes jumped to nearly $10.

In 1884, Grandpa Denton had trouble concerning the Internal Revenue.

Like many, many other people, my wife and I both have a connection with a rather well-known Cocke County man.

He was Frederick Asbury Denton, known as “Uncle Berry,” who was born 14 March 1815, in Jefferson County, TN, probably near today’s Lawson’s Chapel United Methodist Church, a son of Jacob (1801-1880) and Margaret (Lichlyter) Denton (1796-1874). With the coming of TVA and the creation of Douglas Lake, Jacob and Margaret’s were among the graves moved to Lawson’s Chapel Church Cemetery.

The Jefferson County Dentons and the Cocke County Dentons were kin, and perhaps this is what prompted Uncle Berry to relocate to the Middle Creek community of Cosby, sometime before the Civil War.

For many years, researchers tried in vain to “plug him in” to local Denton families living nearby, but eventually we got things sorted out. He was my wife’s great-great-grandfather, and his mother’s sister was my great-great-grandmother, Esther Lichlyter Bragg Gregory. Ah, a Southern family tree!

We know little about his first wife; family lore says she died in childbirth with their only child.

His second wife, Susannah, was a young widow; she and Uncle Berry reared nine children to adulthood, and the number of their descendants scattered around today must be in the hundreds, if not more.

Following Susannah’s death, Uncle Berry married Catherine ‘Caty’ Blacklock, who was somewhat younger than his oldest children. They had one son.

Uncle Berry’s farm was quite large, and for the era, they were a pretty affluent family. When Civil War erupted, he and Susannah were already the parents of six children, ranging in age from an infant to 8 years.

He was a member of the Home Guard, a group of community men who pledged themselves to protect their homes and families as best they could. These were older men under the command of Jefferson Denton, a cousin. As such, they were often targeted by Confederate soldiers, scouts, and/or bushwhackers.

On one occasion, marauders threatened to hang Uncle Berry unless he revealed the hiding place of a horse. They placed a rope around his neck and pulled him off the ground several times, choking but not actually killing him. He later said there was no horse. “If I’d had one, I’d have told them where it was!”

As a landowner, Uncle Berry also faced tax responsibilities. Our cousin, Phyllis Denton of Alcoa, has shared several tax receipts showing where he paid both his land and his road taxes.

In 1848, Uncle Berry, his brother Thomas C. Denton, and their father Jacob Denton paid what we would consider paltry sums. Uncle Berry paid 96 ½ cents “in full of his Tax in Dist. No. 5.”

In 1866, the first year after peace returned, Uncle Berry’s taxes had risen to $9.10, for probably the same holdings. Inflation had struck the bankrupt country!

In that era, citizens were responsible for the upkeep of roads. As can be seen in the accompanying receipt from 1882, Uncle Berry paid “$1.69 as a “Cash Levy.” He had three other options: to supply horses and mules for the work, to offer his own physical labor, or to allow his “Tools and Implements” to be used for the work.

Perhaps we best remember Uncle Berry for his living to the advanced age of 103 years. He died 29 June 1918, and is buried in the Frederick Asbury Denton Cemetery near his home. He was said to have ridden his horse until age 98.

There are photos of a large family gathering, probably taken at his 100th birthday party. The picture in today’s column dates to around 1910. One son, Noah, had died in 1909 and so is not pictured, and a daughter, Sarah Denton Shults, who is in the picture died in 1913.

Those of us who enjoy family history often say, “I wish I had known a certain ancestor and could have sat down and asked him/her lots of questions.”

Believe you me, Uncle Berry Denton is on my list of those I’d like to chat with. Can you imagine the stories he could tell?