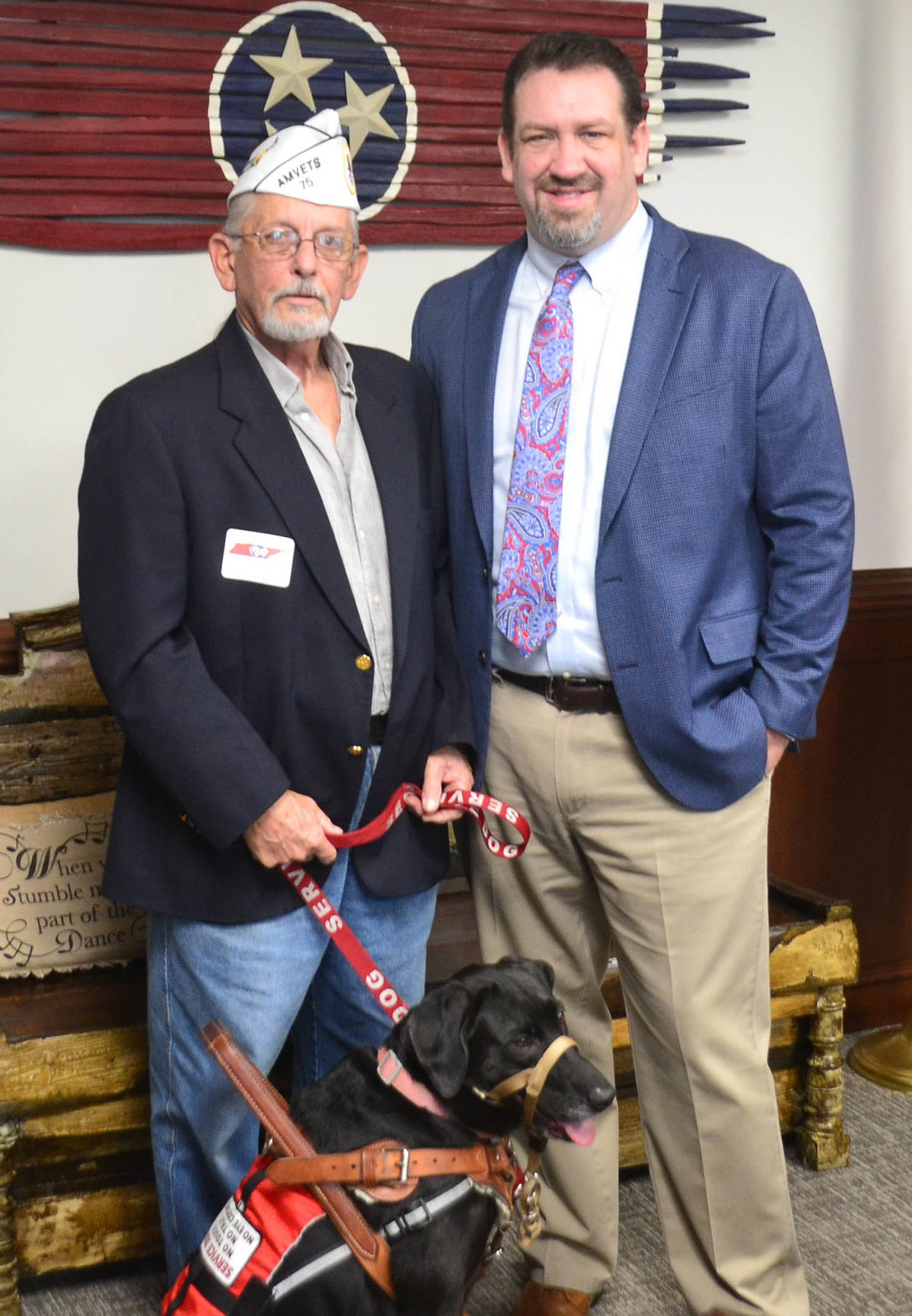 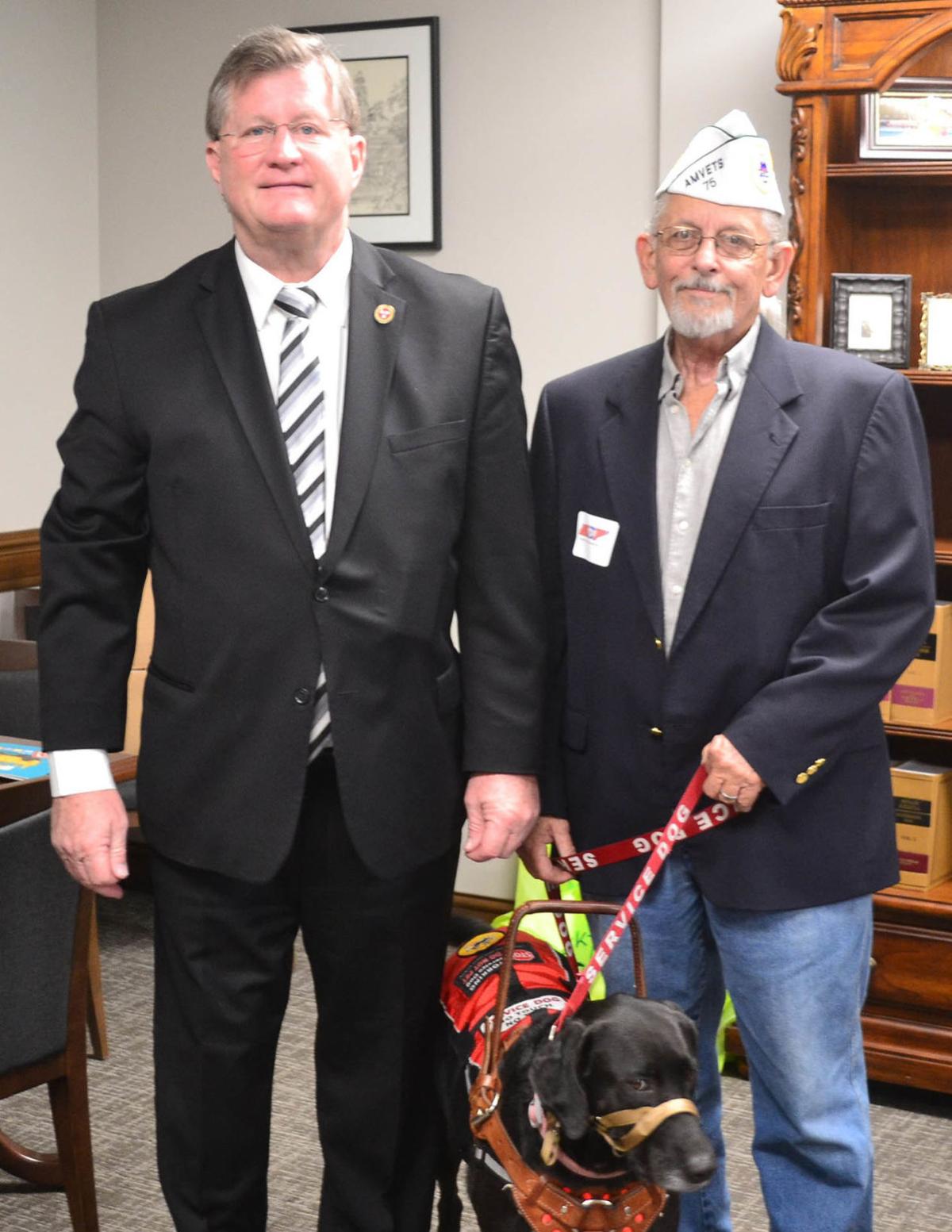 Every state in this country has benefits that they provide for their veterans, some have more than others. There are many benefits available for Tennessee veterans that include discounts for state parks, access to state veteran nursing homes, burial in state veteran cemeteries, and for totally disabled veterans, property tax relief and free license plates and hunting and fishing licenses.

Numerous other states provide more benefits than Tennessee and our veterans look to encourage our legislators to add more of these benefits.

State capitols are full of lobbyist, special interest groups and regular citizens that fill the halls to encourage or discourage the legislators votes on issues. Many of the groups plan one day a year they can amass a large group of their members to meet personally with the legislators.

Large numbers of each group, in a concentrated effort, let representatives know what bills need their support. This past week I had the opportunity to join over 125 other veterans in Nashville.

Since 2016 an organization, Tennessee Veterans (TVET), has worked to bring veterans from organizations throughout the state to meet and “lobby” their state Representatives and Senators. Wednesday February 5 was the annual “Vets on the Hill” so I decided to take a day trip and see how the day went. It was a long day, but I found it really interesting and was successful in meeting with both of our representatives Senator Steve Southerland and Representative Jeremy Faison.

The event was nicely organized, and I was met at registration by a group of female Veterans from Clarksville who were “running the show.” Since I was the only one from Cocke and the representative district I was given a card with their room numbers where I could meet with them. The card also listed an important hearing that I should attend.

I started off going the Senator Southerland’s office. I have met the Senator a couple of times at events but never had the chance to get to know him. His receptionist told me there was someone with him and that he should be finished in a few minutes, if I would like to wait.

She asked for my name and when I responded she said, “Mr. Watkins, I know that name. The Senator will be happy to see you.” I was puzzled. Seems that the Senator had read a story about something that I had been involved in and had been working on recognizing me for the event. She had been preparing the paperwork and had recognized my name. More about that in a future column.

Senator Southerland invited me into his office and explained that he had been developing a couple of things to recognize my work for veterans in Cocke County. We talked for a while and I shared the reason for my visit. I described the three bills that I felt were important for the veterans, two of them he co-sponsored. I found the Senator to be knowledgeable of the legislation and he was gracious and agreed to vote in favor of all three.

We talked about the issues I saw as important to our community and saw that he has a pretty good understanding of the needs of his constituents. He was very open about the love he had for the people he represents. It was good to get the chance to spend some time talking with the Senator and learning more about him. I feel he is sincere and dedicated to supporting legislation that will help our community grow.

As we were finishing up, the Senator told me about the paperwork the receptionist mentioned. The process for the paperwork had not been finished and when it was, he would contact me. He shared that he had an American Flag flown over the State Capitol for me and gave it to me with a nice certificate. He also signed and presented me with the newest edition of the Tennessee “Blue Book.” I was surprised by these gifts and will treasure them as validation of the work I have been doing for the last forty years.

Next, I went up to visit State Representative Jeremy Faison. Now our relationship is much different that mine with Senator Sutherland. Since Jeremy lives in Cosby, he is almost a neighbor and when he is not in session, we run into each other quite a bit.

He was not in his office because of a hearing over at the Capitol building. She said he should be back soon and that I should return. I went down the hall to the elevators and met a woman who recognized the “Newport” on my hat. Seems she was a realtor and had lived in Newport for a time in her younger life. While we were talking Jeremy came through the lobby and saw me.

When Jeremy saw me, he said that I should have called to let him know I was coming. He could have lined up a few things for me to see. I shared with him that this was a last-minute trip, I had only had the information two days, and I was there for “Vets on the Hill.” He introduced me to other people in his party and invited me back to his office.

I found his office filled with things from the Cocke County area. He was extremely proud of a gift a veteran had given him. It was about a two-foot wooden version of a U.S. Marine Corps “Seal” emblem. You can tell by his office that he is proud to be representing his home community.

I spoke to him about the three bills as I had with Senator Southerland. Jeremy was knowledgeable of them and was co-sponsor on one. He talked about some upcoming events and his hopes that other legislation that will help our community will be heard by the committees.

Recently Jeremy was elected to be the Chairman of the House Republican Caucus. This Chairman position makes him one of the highest-ranking members of the House Leadership. In this position he will be better able to continue to press for help for our community. When I left Jeremy, I went to sit-in on a couple hearings.

The first hearing I sat in on was the important HB0787; As introduced, requires the department (Tennessee Department of Veteran Services) to provide training in mental health crisis management to the employees of the department who directly interact with veterans for the purposes of assisting veterans with mental health issues.

Last April the bill was placed on the calendar of the Finance, Ways and Means Subcommittee where it was placed on hold. The bill came back to life and was scheduled for February 5. This was picked by TVET as the most important bill to support.

The hearing room was packed by veterans and each representative on the committee took the time to recognize the veterans who had come to visit them. After a presentation of the bill, by Representative Hall, the bill passed unanimously.

I then found a hearing by the Senate Energy, Agriculture and Natural Resources Committee that was within my timeline and decided to listen in. When it started, I discovered that Senator Sutherland was the Chairman of the Committee. When the meeting opened five of the twelve members took the time to introduce the veterans who had come to visit them. When all were finished the Senator asked me to stand (I didn’t know that he had seen me in the far back of the room). He introduced me as Veteran of the Year, from Cosby, Tennessee.

The Department of Agriculture was giving their annual report to the committee. I found some interesting information about the ash borer and other tree pests. While several of the Senators were “otherwise engaged” I saw that our Senator was actually leaning over towards the speaker and was fully attentive to the man’s subject. I enjoy seeing those who are our representatives doing such a good job paying attention.

“Vets on the Hill” is only one step in the effort to get support for Veteran issues. During the rest of the session veterans and veteran groups will be speaking before legislative committees on bills coming before our representatives.

If you have concern about any pending legislation, get a hold of your representatives and let them know you want their support. I hope to see more of our area veterans show up next year and let all the representatives recognize our voice and our votes.

I know Gem Lieser from the Newport Plain Talk was there and will be doing a story about the breakfast. I just wanted to say a personal thanks to Marjorie Ramsey for the wonderful event she put on. My wife Katie and I went up on Friday to help her set up the Community Center room. I am glad we did because she was there by herself. This was the 16th year and has always been from her heart and by her hands.

The costs for this event over the years has been out of Marjorie’s pocket with the help of a few local supporters who provide door prices for the veterans. She wanted to make sure they got thanked so I will share her list. It is companies like these that show their support for our Veterans.

American Legion Post 41 meets the second Tuesday of each month at the American Legion’s Cocke County Memorial Building 103 N. Cosby Highway. The next meeting will be Tonight, Tuesday February 11 at 5 p.m. with a potluck meal, followed by the business meeting at 6 p.m. Entry will be on C Avenue across from the Newport Fire Department. You can call David Mills, Commander at (423) 237-6896 for directions or more information.

Rob Watkins is a totally disabled, Air Force, Vietnam combat veteran. He has worked with Veterans for over 40 years. As a member of local organizations, he continues his path to help others. Please send information, dates for events, two weeks in advance, questions or suggestion; by mail to 565 Caney Creek Road Cosby, TN 37722 or c/o Newport Plain Talk, email; viewfromthebunker@yahoo.com, Facebook/View from the Bunker, or call 423-721-8918.