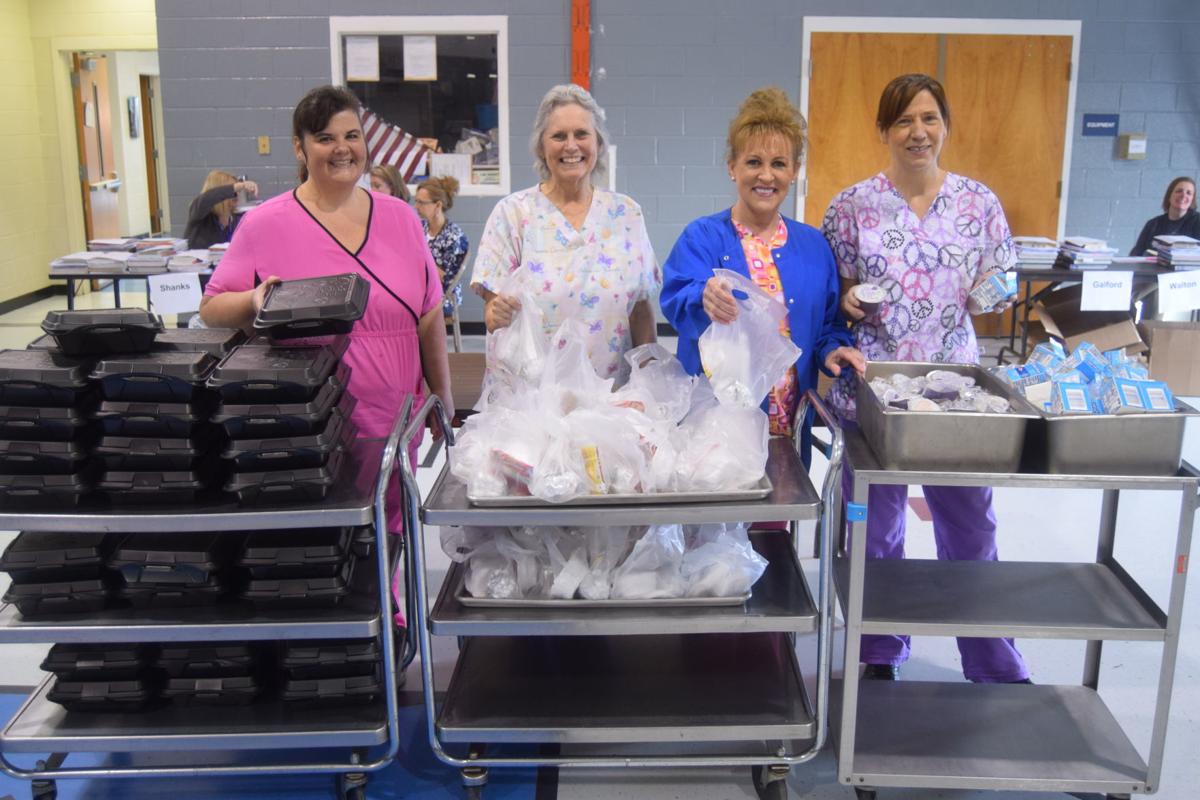 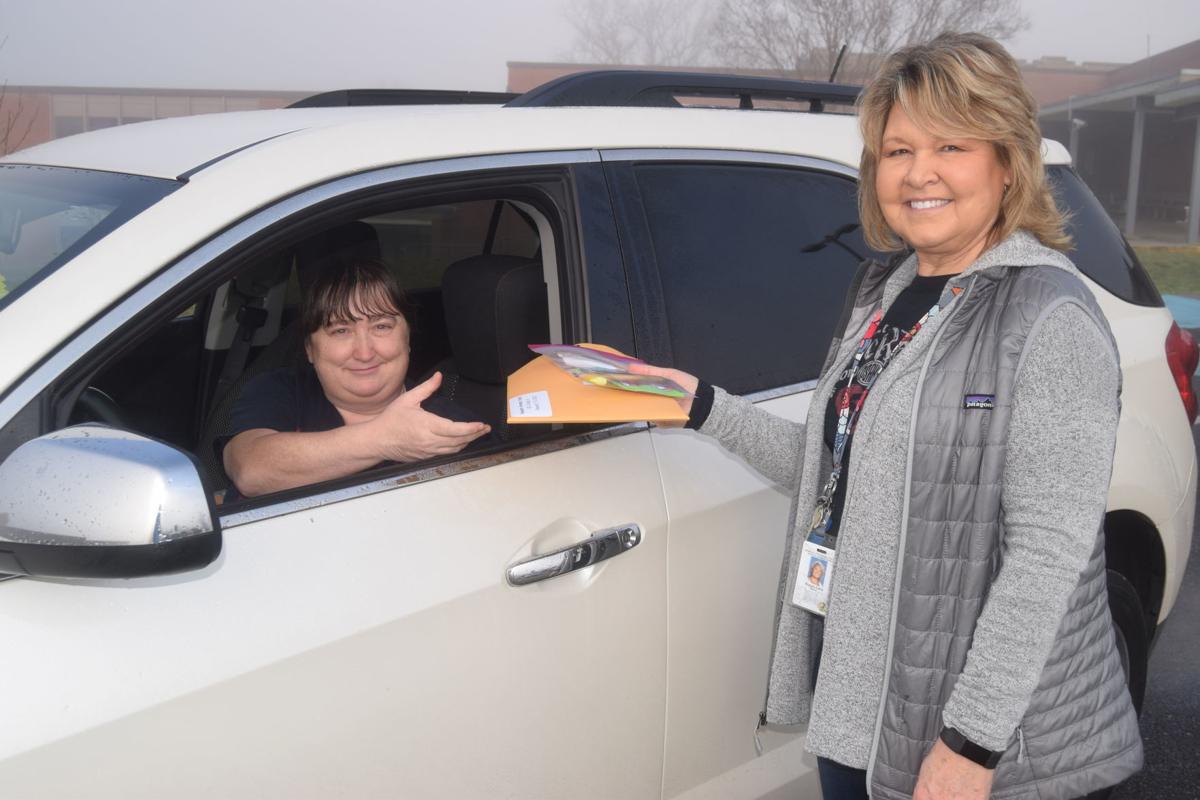 Ernestine Romines, left, was one of many parents driving through the line Wednesday at Newport Grammar School to pick up study packets for her granddaughter, Kenna Romines, a third-grader. Kenna’s teacher, Robin Lane, right, was ready to send the work home to Kenna. 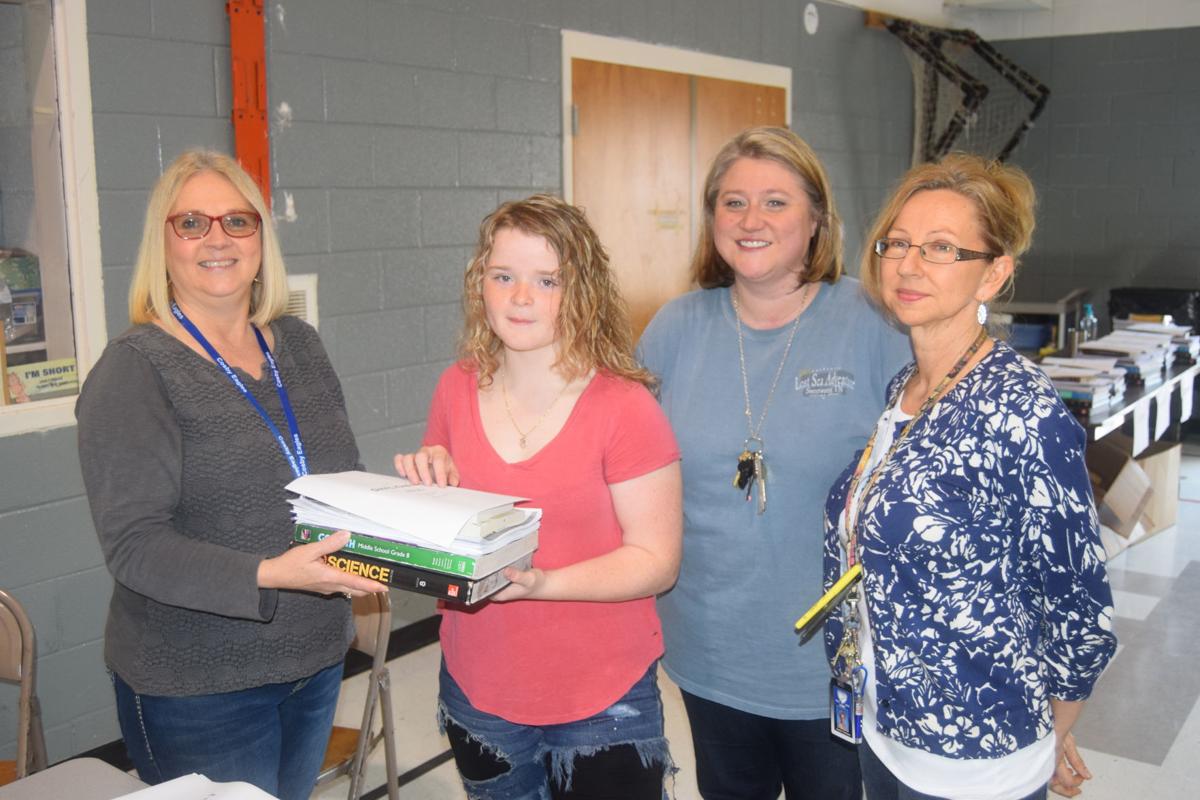 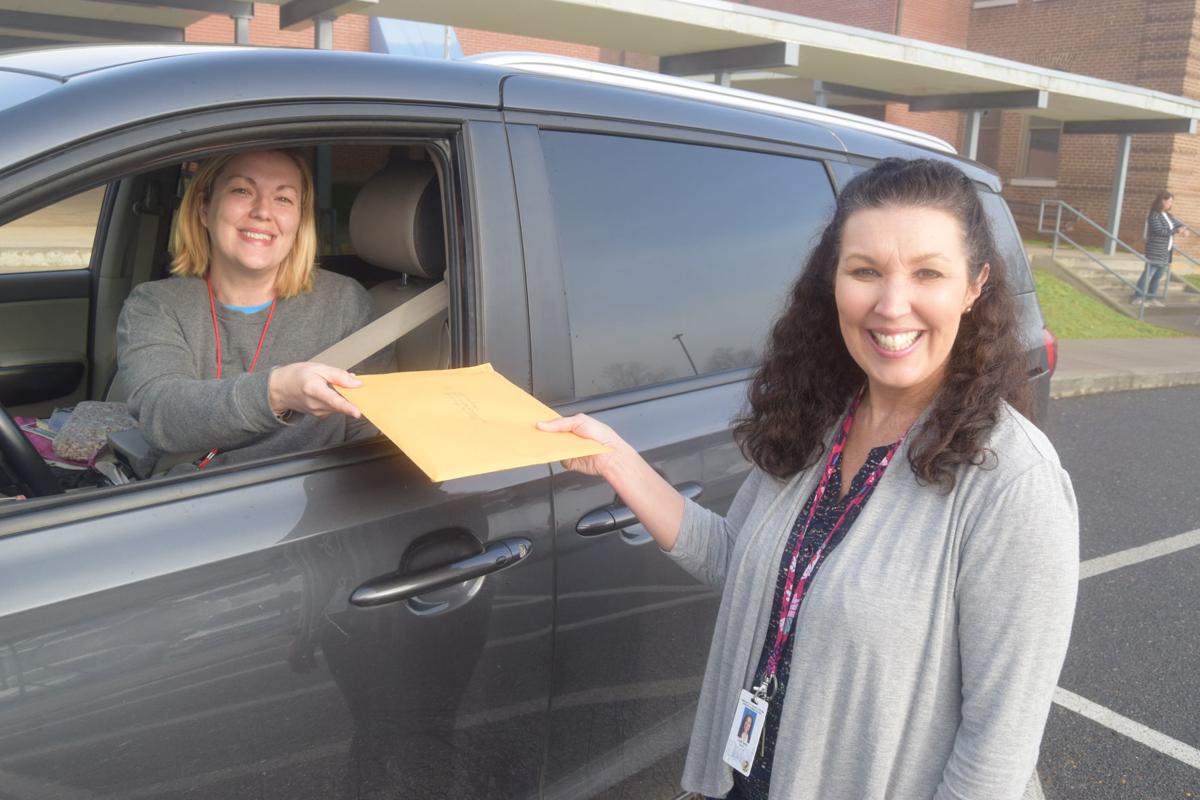 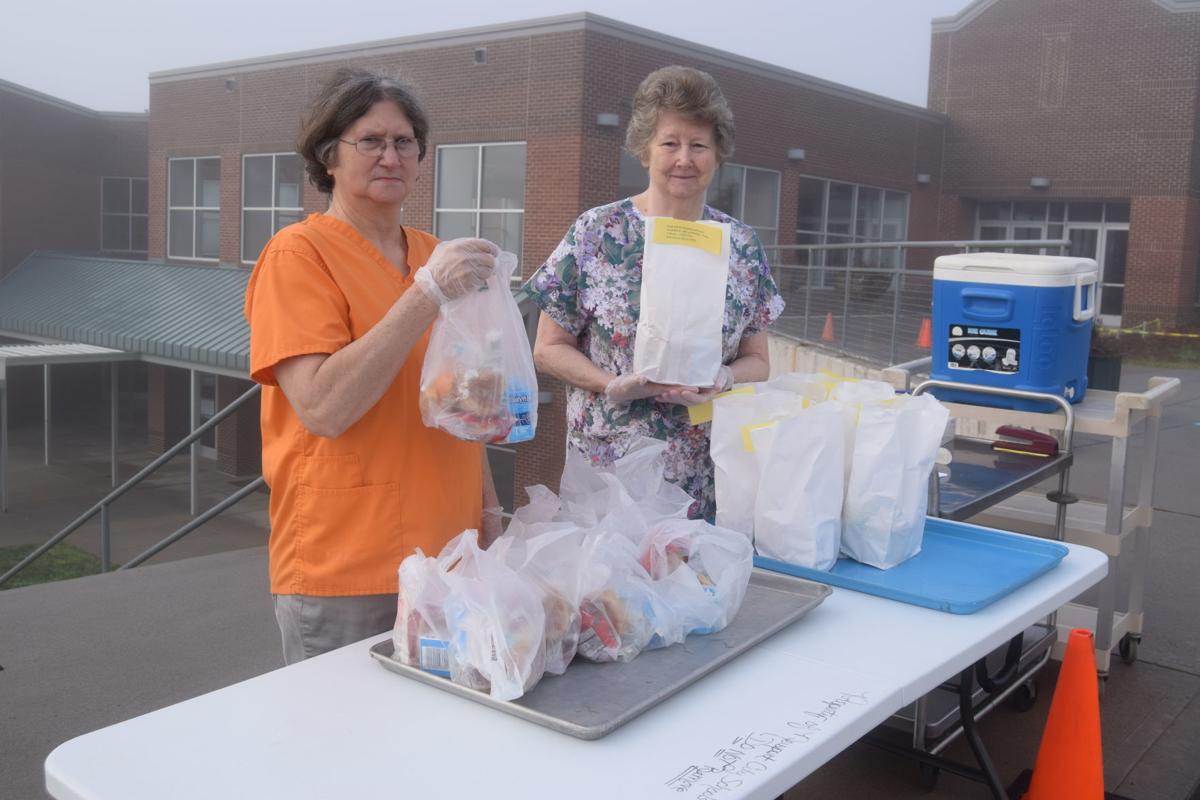 Ernestine Romines, left, was one of many parents driving through the line Wednesday at Newport Grammar School to pick up study packets for her granddaughter, Kenna Romines, a third-grader. Kenna’s teacher, Robin Lane, right, was ready to send the work home to Kenna.

NEWPORT AND COSBY—Even though approximately 5,000 Cocke County school children, ranging from grades K-12 and coming from two separate school systems, found themselves on an unexpected two-weeks’ vacation from school this week, quick and determined planning and preparation by a legion of local school administrators, teachers, and staff provided an alternate plan of learning during this time.

Members of the Newport City and Cocke County Boards of Education met jointly on Sunday afternoon, March 15, to discuss the COVID-19 virus and its rapid spread and, in a joint press conference later that day, announced the closure of all local schools for the next two weeks.

However, many school principals and staff had already started making plans for the event.

“The Central Office met with all school principals on Friday, March 13,” said Cosby Elementary Principal Christy Edmonds, “and gave us a heads-up on what was looming. They pledged to do anything they could to help us provide needed study materials for test preparation.”

After returning to her school, Edmonds and Cosby Elementary Assistant Principal Luke Bell spent the rest of the day meeting with each teacher during planning time. Discussions led to a decision of what to put in packets to help with test preparations, what types of novels to send home, how to coordinate the preparation and distribution of food, and a myriad of other problems and questions.

“We outlined as many activities as we could that can be done on paper. Some of the activities include journal writing and math materials. The Central Office provided TN Ready practice books for all study areas: ELA, social studies, math, and science. A child without internet access will not be held accountable for anything he/she cannot complete because of that,” Edmonds said.

“Rebekah Fisher, who oversees the county’s food service program, provided grab bags and to-go boxes for our cafeteria staff’s use,” Edmonds continued. “On Friday we ordered a pallet of food from Second Harvest and it was delivered on Tuesday. Teachers lined up to help stuff the bags and boxes for distribution.”

“Our librarian, Leigh Anne Hall, brought down a huge box of books for children to check out and take home,” continued Edmonds.

Preparations for the coming two weeks zoomed into high gear on Monday morning. “Brian Sutton and Sandy Sauceman, our custodians, were at school at 6 a.m. to help set up tables and chairs in the gym for our teachers by each grade level,” said Edmonds.

“It was like walking into a room full of goal-oriented people. I’ve never seen anything like it,” she continued.

Working frantically all day Monday and early Tuesday, the Cosby staff had everything set up and ready to go by ten o’clock when parents started arriving. “Glenda Henderson, our secretary, has fielded literally hundreds of telephone calls since last week from parents anxious to confirm times and places. All of the calls were positive.”

The turn-out of parents arriving to pick up the study and food packets on Tuesday was overwhelming. By Wednesday, very few remained, and most of these were claimed by lunchtime. Of the 430 packets, all but five had been picked up. Wednesday afternoon found Edmonds and Assistant Principal Luke Bell hand-delivering the remaining five packets.

Similar activity led to Newport Grammar School staff members being ready to hand out hundreds of packets and food to their school population, starting Wednesday morning at 9 a.m.

“After the board meeting on Sunday,” said Sandra Burchette, Director of Schools, “I called my four assistants—NGS Principal Michael Short, NGS Assistant Principal Dustin Morrow, NGS Systems and Assessments Supervisor Dr. Justin Norton, and Federal Programs Supervisor Amy Burchette--to come in for a meeting. I also sent a voice mail to all the staff and parents about the coming closure.”

Late Sunday afternoon Burchette and her assistants brainstormed about what to do for the coming two weeks to “keep the children up with instruction.”

Said Burchette, “Dr. Norton developed a scope and sequence for each grade level and suggested items to be included with the standards in the packets and the process of what to do.”

On Monday, March 16, at 8:30, Director Burchette met with her entire staff, custodians, cafeteria, medical, assistants, teachers, and office personnel, to discuss the situation. “I simply gave them an overview of our plans,” she said.

“Then Principal Short showed a PowerPoint of the different steps of the plan. Amy Burchette met with the special education teachers to make sure the needed accommodations pertaining to each student’s IEP were included in the folders.

“All of our special teachers (art and music, for example), and teaching assistants were assigned to help each grade level prepare to packets for distribution,” Burchette continued.

Whereas the Cosby Elementary teachers and staff distributed their work and food packets from the school gym, NGS opted for a different method. “At the suggestion of our teachers Ronda Williams and Robin Lane,” said Burchette, “we arranged for tables to be set up for a drive-through method of distribution. It worked beautifully.”

In order to distribute both breakfasts and lunches, Director Burchette had to get special permission by the state. “Our cafeteria manager, Christina Leas, oversaw the preparation. I would like to emphasize that any child, ages 2-18, may receive food during this time. Starting Thursday, March 19, the food distribution will be moved to the gym parking lot.”

By the end of Wednesday, only 80 packets had not been picked up out of the over 700 prepared. “NGS Assistant Principal Dustin Morrow and our School Resource Office Justin Vinson began delivering the remaining packets Wednesday afternoon,” Burchette said.

Both Edmonds and Burchette agreed and were overwhelmed by the total cooperation on the parts of their teachers, staffs, and parents. “I heard not one complaint during the whole time,” Burchette said.