Accounting Specialist Sherry Freeman was honored at the December Jefferson Cocke County Utility District Board of Commissioners meeting for 35 years of service. She began work in 1984, when Col. M. M. Bullard led the gas utility. From left are Board Secretary/Treasurer Robert Overholt, Freeman, and General Manager Tommy Bible.

NEWPORT—With the natural gas customer base approaching 8,000 for Jefferson Cocke County Utility District (JCCUD), weather is a key factor for sales, but after a cold November forecasters see warmer days into 2020.

If you look back to 1980 with utility records, similar conditions existed. The two coldest November years measured by degree-days were 2014 at 705 and 1997 at 699. Normal is 485-degree days. The lower the number of degree-days the warmer.

The key reason for the lower sales is four major industries have used four to seven percent less NG for various reasons. A Dandridge-area silver processor of x-ray film burned earlier in the year.

Industries will be slower to return to full production, said Bible. But on the bright side, a local industry could make up for lost NG sales. Watch the Plain Talk for news in 2020.

Commissioners usually reset rates in order to balance out the demand charges over the first quarter of 2020, said Bible. An expected $40,000 refund from ETNG will help. Bible reported a rebate of $690,000 to the East Tenn. Group from ETNG.

Commissioners approved residential rates of $.988 per therm for November. This rate is almost equal to what NG rates were in 2000. The industrial interruptible rate of $.40 (40.7 cents) is the lowest in 20 years.

JCCUD technicians have been busy since early fall filling propane tanks. During Nov. they delivered 158,107 gallons and that number is constantly going higher. Year to date the utility has sold 715,433 gallons. The all-time high is less than 900,000 gals. April 1 thru Nov. Bible expects JCCUD to sell over 1.6 million gallons.

Bible said he has no worries about either storage levels or prices because of the huge build-up of NG and propane supplies in the US. The 2019-2020 production levels are in-line with the five-year average production.

The US Energy Information Administration reported that as of Dec. 13, 2019 natural gas storage was 3,411 billion cubic feet or 22 percent higher than this time last year.

The one thing that does concern Bible is the increasing amount of US natural gas that is being sold overseas as LNG (liquid natural gas). In early Dec. exports were 1,538,000 gallons.

US exports of LNG were small compared to other countries such as Qatar in the Middle East. Now the US accounts for 10 percent of the global market in LNG shipments and sold 22 million tons this year.

Bible said what worries him is if this ramp-up continues, as it is expected to do, US consumers could be paying more for NG in years to come.

In other business, commissioners heard reports on transmission line integrity management, health insurance for retired managers, and a wage increase. The board approved a 2.8 percent increase and with adjustments to total 3.8 percent effective Dec. 27, 2019. This will cost the utility $85,000.

THP Officer Nathan Hall said their units expect to be out in full force searching for impaired drivers, distracted drivers and those not wearing seat belts. Currently THP has scheduled checkpoints in Hamblen and Hawkins Counties.

Newport City Police Chief Maurice Shults has similar goals to those of THP for the night.

“We will go after aggressive and impaired drivers. We ask that if you plan to consume alcoholic beverages during the New Year holiday, that you make arrangements for a sober driver,” Shults said.

With the award of a recent DUI grant, the Cocke County Sheriff’s Department will be able to add additional deputies for the evening. Chief Deputy Derrick Woods encourages designated drivers or simply staying off the highways if you plan to consume alcohol.

Besides alcohol consumption, the weather can play a huge factor in the festivities and calls to law enforcement on New Year’s Eve.

Just two years ago the festivities were dampened by snow and ice. There were over 30 reported vehicle accidents in Cocke County alone.

This year officers are pleased to see the expected weather conditions call for a clear and mild night. 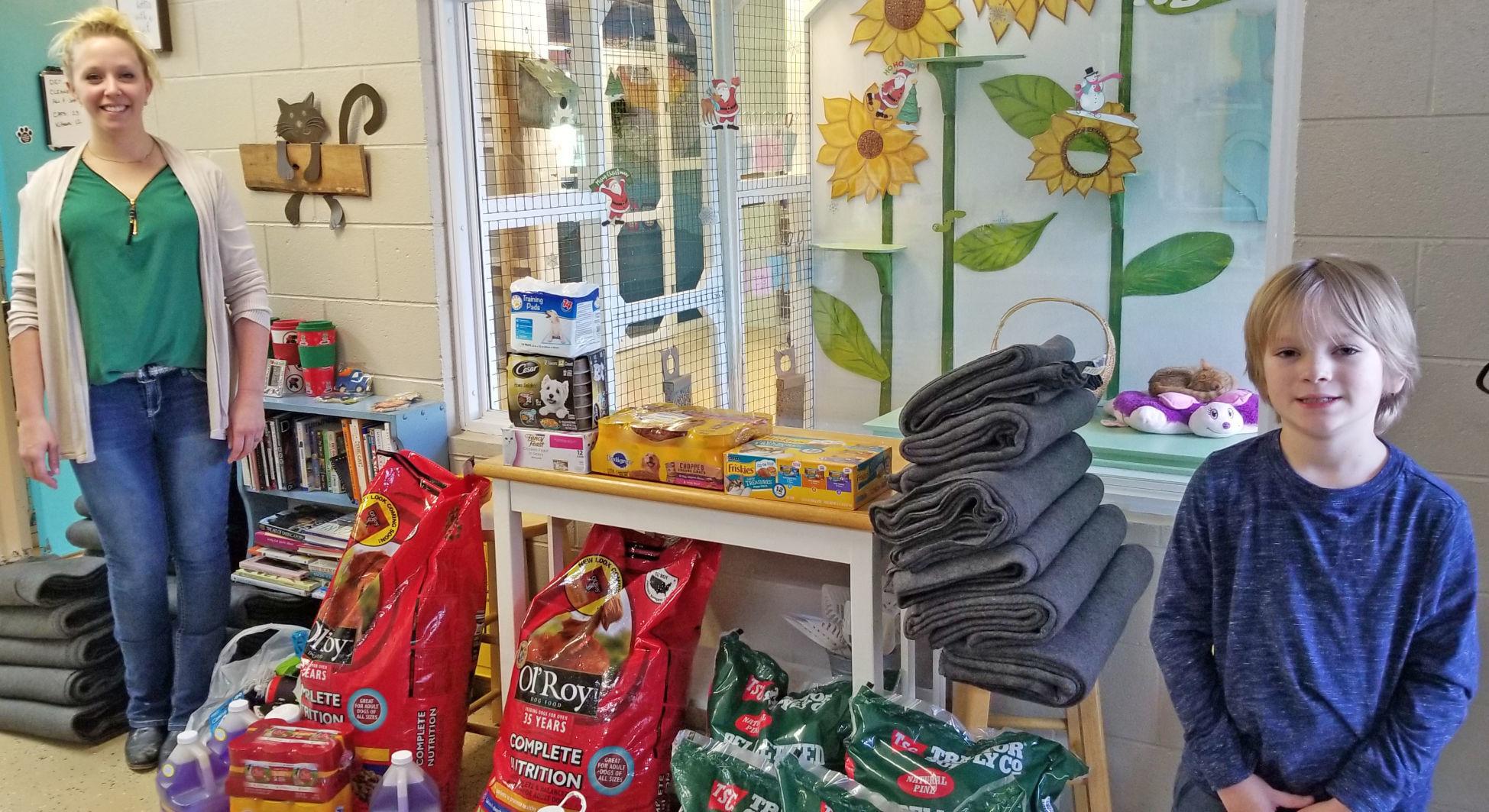 Eight year old Ronin Stewart decided to ask friends and family to gift him with animal shelter donations for his birthday in lieu of presents. Ronin’s mom Jessica Booth said her son has always had a heart for animals and wants to have a house full when he gets older. Right now, however, he is enjoying giving to the animals in need. The gifts donated included 25 blankets, canned dog food, bags of food, pellet bedding and cleaning supplies. Friends Animal Shelter Director Elisha Henry was grateful for the much needed gifts.

He was the last surviving child of John Lewis and Callote (Leatherwood) Moore of the Hartford community.

Prior to his election to the office of sheriff, he worked 30 years for Enka (BASF), retiring from that position in 1986.

He will also be remembered for his artistic talents. A noted glassblower, he and his wife traveled to many points in the Southeast to various shows and displays. Among his favorite designs was a miniature grand piano, complete with bench.

In 1956 he married the former Alyce Stykes of Morristown. They couple had three children: Mitzi, Sheri, and Shannon, along with several grandchildren and great-grandchildren.

Upon speeding out of the parking lot, the officer could see the vehicle had a flat tire and sparks were flying from the rim. Cashen drove the vehicle through a stop sign in front of the Newport City Police Station and proceeded onto Main Street.

At this time police attempted to pull the Corvette over, but Cashen would not stop for law enforcement.

Once on Spicewood Flats Road, he again lost control and struck a patrol car being driven by Deputy Ethan Keys. Keys was not injured in the crash.

The Corvette continued at racing speeds about another mile down the road until the vehicle plummeted into a creek bed.

Cashen was found by a tree on the ground. He continued to resist arrest when officers attempted to take him into custody.

Cashen is facing charges of fleeing to evade arrest, aggravated assault, felony reckless endangerment, failure to yield to emergency vehicles, reckless driving, leaving the scene of an accident, theft over $10,000 and failure to signal and speeding.

Brown informed police the Corvette had a value of $12,000.