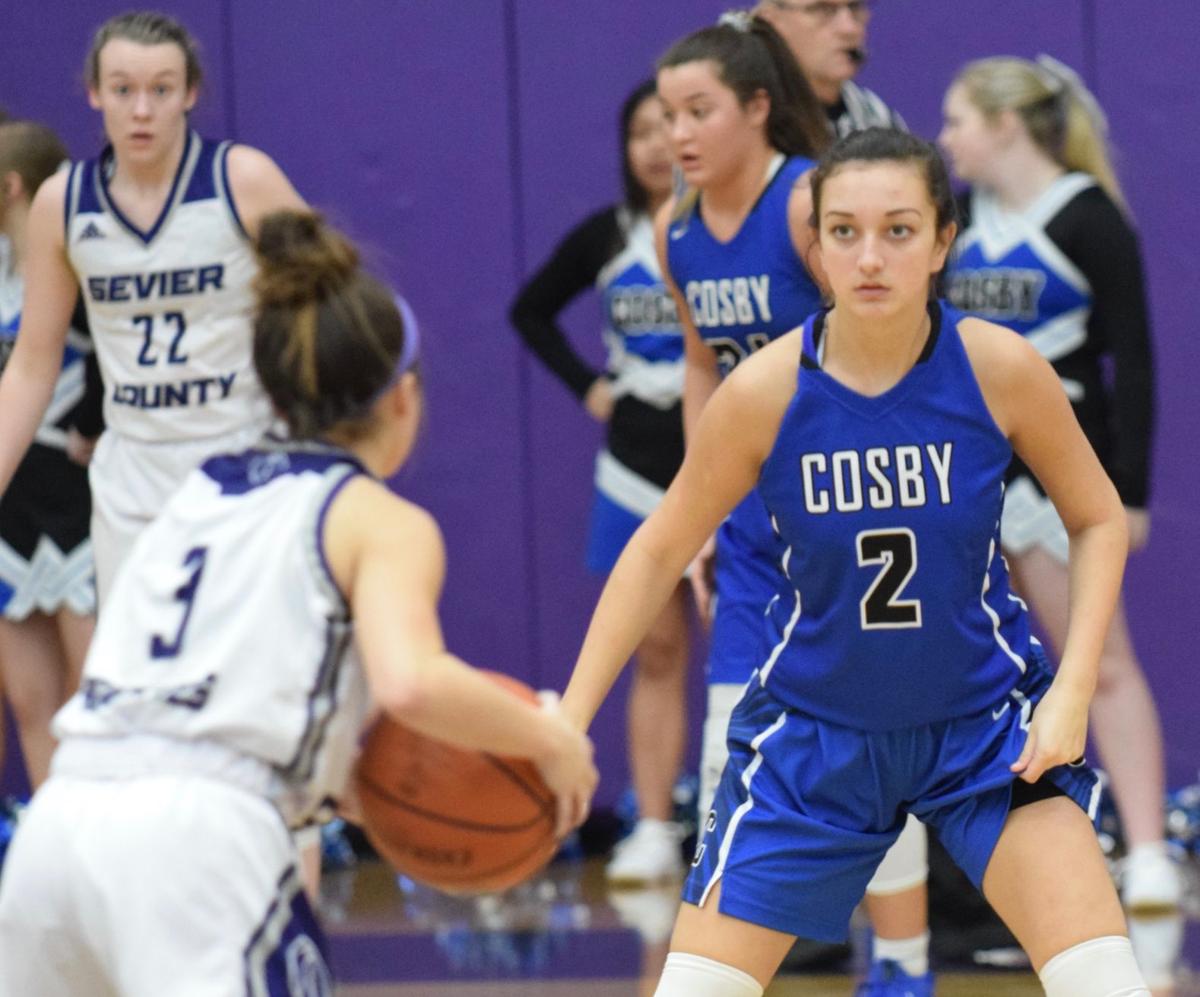 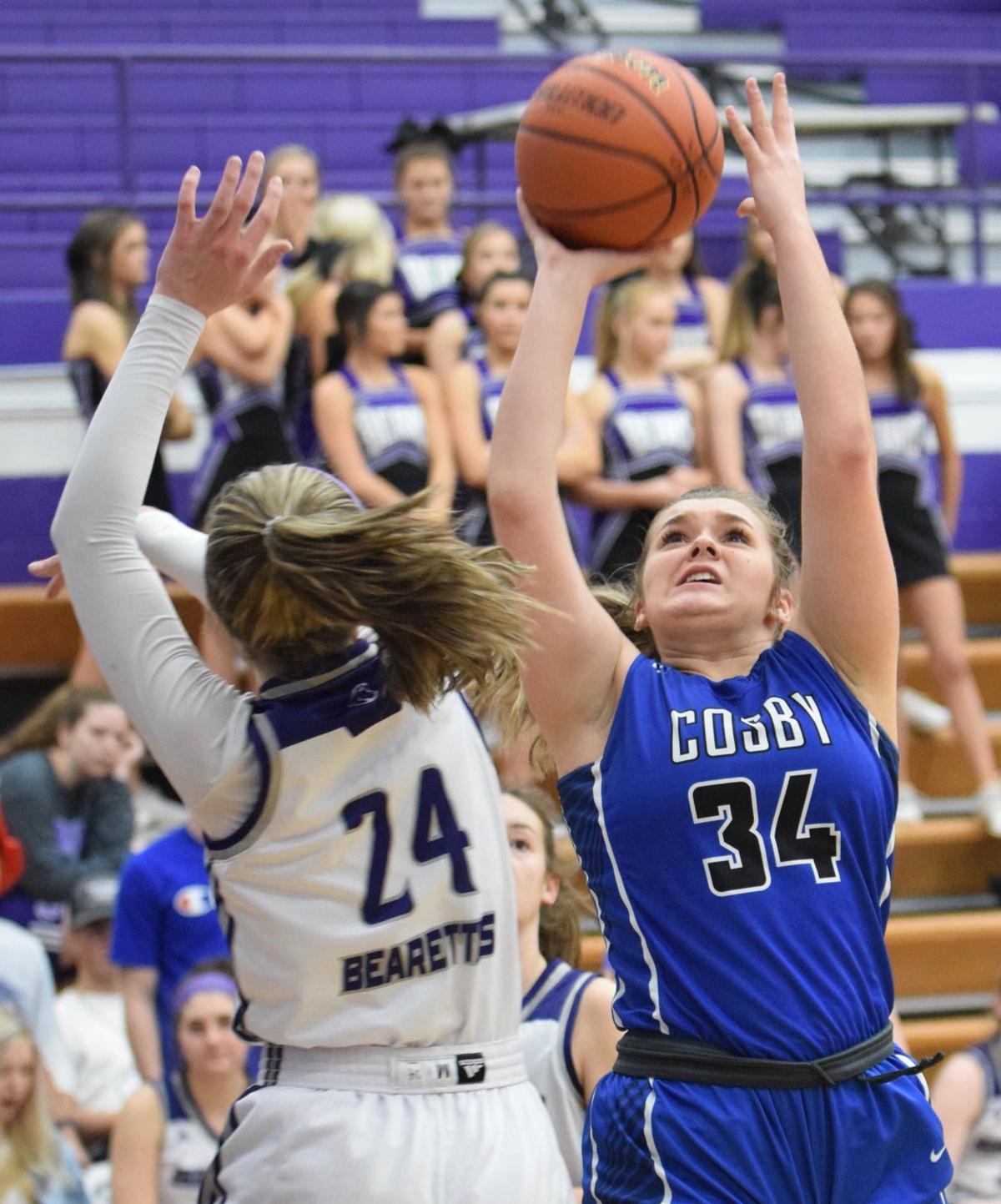 Cosby’s Sabrina Keller (right) muscles up a tough shot in the paint over Sevier County’s Hailey Williams on Monday night.

Cosby’s Sabrina Keller (right) muscles up a tough shot in the paint over Sevier County’s Hailey Williams on Monday night.

SEVIERVILLE—Cosby countered the zone defense with baskets, but not enough to offset the second-chance points it allowed.

Tough as it was to swallow, the defeat marked the end of Cosby’s brutal non-conference schedule. The Lady Eagles (18-12) now aim to reap the benefits of their challenging slate as they begin District 2-A tournament play on Friday night.

“Every team we’re going to play from here is going to be a Single-A team,” Cosby coach Cody Lowe said. “Hopefully it’s gotten us battle tested and ready to make a run.”

Cosby had won six of its last seven games since its Jan. 21 home loss to Sevier County (15-11). The Lady Eagles started slow but recovered, tying the score in the first quarter. But the Bearettes took advantage of their physical post play to crash the offensive glass and remain ahead after that.

Leia Groat rallied Cosby to a 10-10 tie, drawing a foul on her first 3-point attempt. She knocked down her second for Cosby’s first field goal 3:25 into the game, and she put back two misses to even the score.

“Leia played excellent. She kept us in it early,” Lowe said.

The Lady Eagles never led, though, and they fell behind 27-13 in the second quarter on Hailey Williams’ basket. All four of Cosby’s second-quarter field goals came from 3-point range, two coming from Gracie Johnson. Gracie Myers and Johnson hit from deep 27 seconds apart to make it 27-19. Lauren Ford then banked in a straightaway 3-pointer, closing the gap to 29-22. But Sevier County held the Lady Eagles scoreless until Johnson’s transition layup early in the third quarter.

Cosby then went nearly six minutes without another field goal until Myers’ 12-foot jumper ended the drought. But the Bearettes still held a commanding 50-27 lead.

“You can’t let good teams go on runs like that and expect to win,” Lowe said. “We have a hard time getting good shots and guarding against them. Good physical Triple-A team. It was good for us to play that right before the district tournament starts.”

Groat led the Lady Eagles with 13 points, hitting a 3-pointer in the fourth quarter to end her night. Myers finished with 7 and Johnson had 6 with Ford adding 5. Tessa McGaha and Kinley Coggins each scored in the final quarter Coggins hitting a 3-pointer and McGaha scoring twice in the paint.

Bralyn McGaha scored Cosby’s final bucket of the third quarter to make it 52-29 going to the fourth. The District 2-A Most Valuable Player finished with three points, leaving her at 997 for her career with at least three more games this season.

Whaley led the Bearettes with 16 points and like Groat scored 10 in the first quarter. Emma Huskey and Whaley each scored a putback for an early 8-0 Sevier County lead. The Bearettes led the rest of the game after scoring nine straight points to close the first quarter for a 19-10 advantage. Whaley and Williams both hit midrange jumpers with Natali Shultz knocking down a 3-pointer. The run reached 13-0 in the second quarter when Huskey finished in the paint twice.

Sevier County hit from deep twice after Cosby pulled within seven. Mackenna Loveday buried a second-chance triple, and Shelby Smith’s long ball in the closing seconds put the Bearettes ahead 35-22 at halftime. Huskey finished with 13 points and Shultz had 9, all coming on 3-point attempts.

The Lady Eagles host Hancock County in Friday’s District 2-A tournament semifinal round. Tip-off is set for 7 p.m.

ACREAGE IN PARROTTSVILLE PERFECT FOR HORSES!