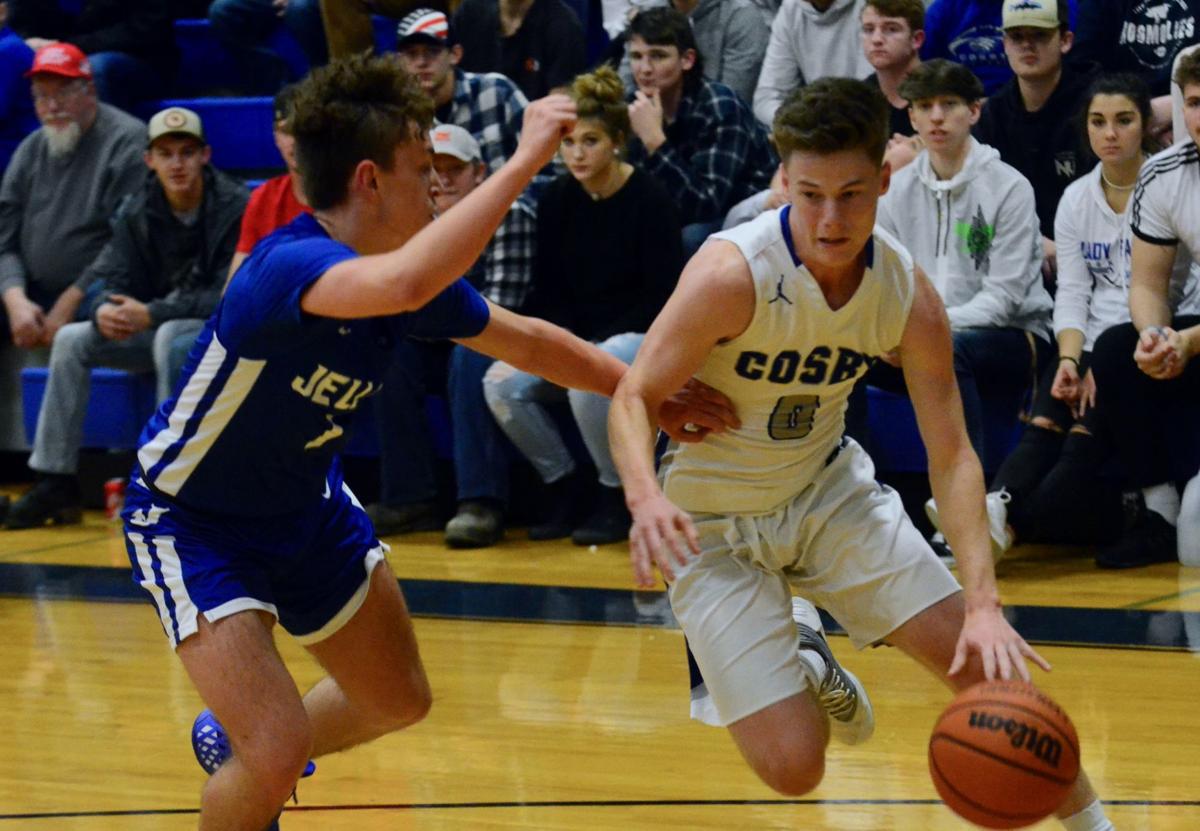 FILE — Cosby senior Jeremy Wise drives the baseline during a victory over Jellico earlier in the year. Wise led the Eagles with 22 points in their win over Elizabethton on Saturday. 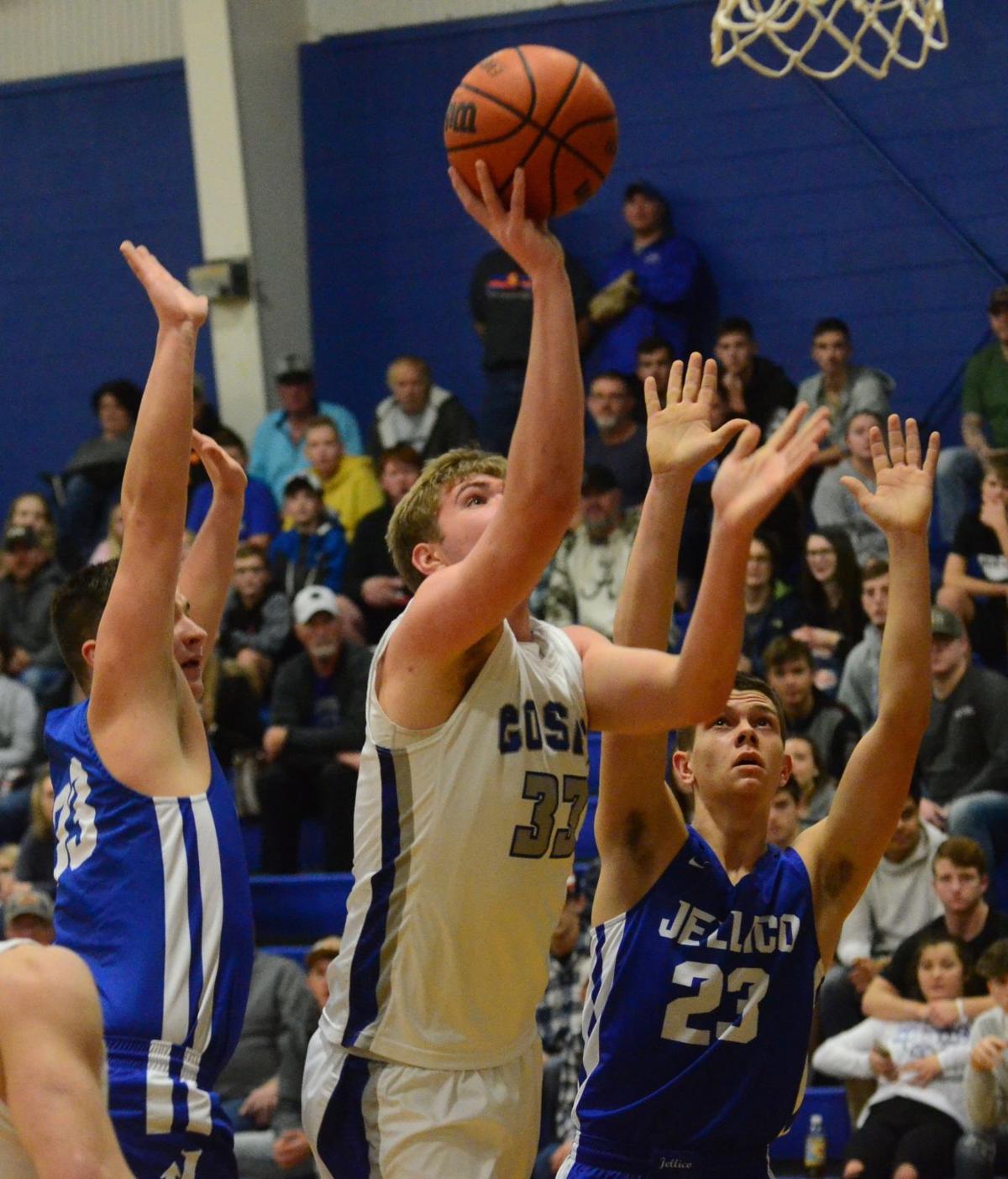 FILE — Cosby junior Riley Galler puts up a shot in the paint between a pair of defenders against Jellico earlier in the season. Galler had four points in the Eagles’ win at Elizabethton on Saturday. 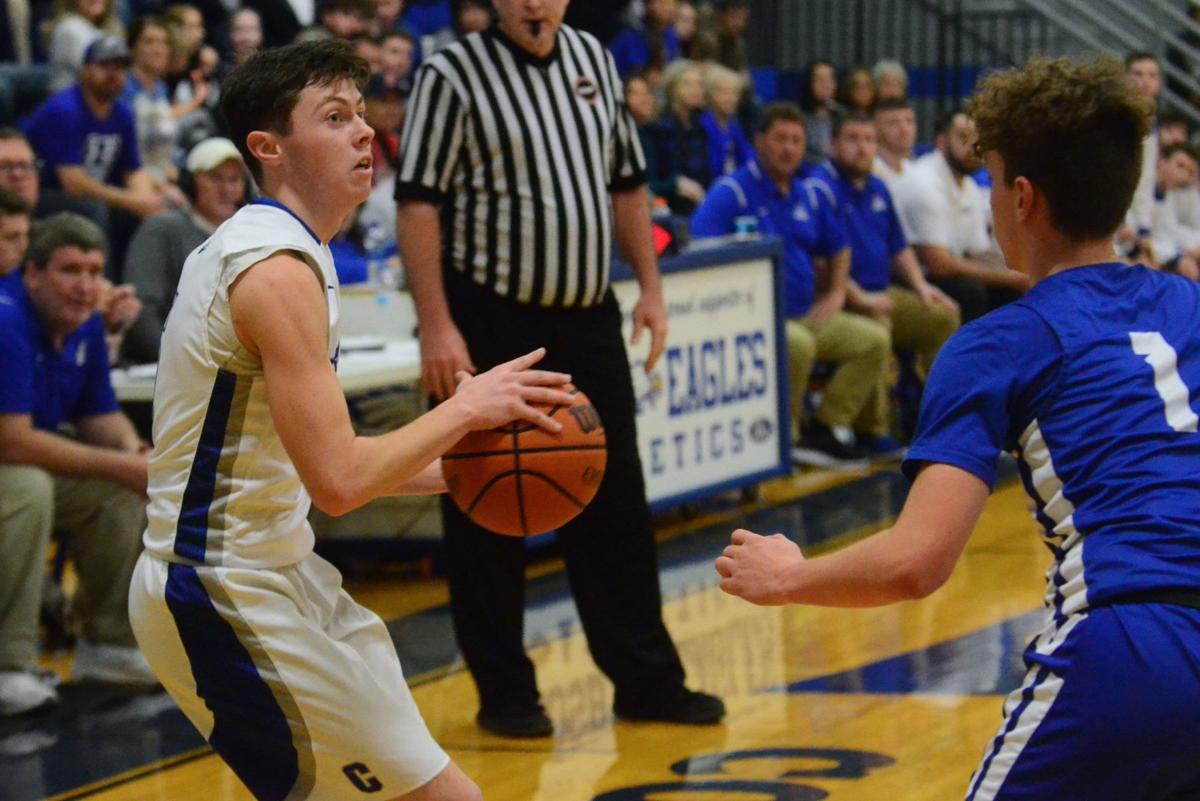 FILE — Cosby senior Braden Shaffer sets up for a shot during the Eagles’ victory over Jellico earlier in the year. Shaffer had 14 points in Saturday’s win over Elizabethton.

FILE — Cosby senior Jeremy Wise drives the baseline during a victory over Jellico earlier in the year. Wise led the Eagles with 22 points in their win over Elizabethton on Saturday.

FILE — Cosby junior Riley Galler puts up a shot in the paint between a pair of defenders against Jellico earlier in the season. Galler had four points in the Eagles’ win at Elizabethton on Saturday.

FILE — Cosby senior Braden Shaffer sets up for a shot during the Eagles’ victory over Jellico earlier in the year. Shaffer had 14 points in Saturday’s win over Elizabethton.

ELIZABETHTON—Finding ways to win on the road a crucial to a team’s development and success. The Cosby High Eagles successfully did so in back-to-back nights.

After a thrilling win against Hancock County just the night before, the Eagles pulled out another close victory. This time, however, the Eagles had to keep their lead in the final minutes rather than come from behind. They managed to do so, too, with the 66-59 victory.

“I was a little concerned about how we would come out against Elizabethton,” Cosby’s head coach Kurt Brooks said. “We went through an emotional rollercoaster against Hancock County, but I have to tip my hat to my players. They stepped up to the challenge and showed the maturity to play the way we want to play.”

Cosby (13-5) earns the season sweep over Elizabethton (4-11) now after knocking them off at home and on the road.

The victory was led by a trio of Eagles. Jeremy Wise dropped a co-game-high 22 points, as Trey Johnson followed with 20 points, 18 of his points coming in the second half. Braden Shaffer struggled in foul trouble but still tallied 14 points thanks to his 12 in the first quarter.

“The way Wise played means so much for us,” Brooks said. “He was stepping out of his comfort zone and knocking down 3’s. That’s huge for us because it takes a lot of pressure off of Shaffer and Johnson. When Wise is scoring, we can open up the floor with Shaffer and Johnson.”

“We knew we had a challenge with Ashely for Elizabethton,” Brooks said. “I told Johnson before going into the game that he had to stay aggressive with him. He had to put a body on him on defense. Johnson did a great job at holding him a lot of the time.”

Cosby was able to maintain a steady first-half lead, but the momentum in the second half began to flip.

Elizabethton came out of the half determined to make it a game. Only trailing by nine points in the final two minutes, the Cyclones gave Cosby a scare.

In the end, it was Cosby’s top three scorers that were able to celebrate a victory after the final buzzer. Wise knocked down 3-of-4 foul shots in the final seconds to separate the Eagles by seven and secure a win.

“I thought it was the most complete game we have played from start to finish,” Brooks said. “We went up against a good team that is healthy now. I was very proud of the maturity level and slow down to run at our own pace. We played together and managed to keep each other grounded.”

Elizabethton and Cosby began in a back-and-forth affair, but after tailing 8-7 the Eagles went on a 12-3 run — all from 3-point land. The Cyclones could not match Cosby’s shooting on the perimeter.

Shaffer began the first quarter with a hot hand after knocking down four triples to lead his team to a 21-12 advantage.

“Shaffer came out stroking,” Brooks said. “He got into some foul trouble and didn’t get to play a lot. For him to get us 12 quick points for us was big. It didn’t look like he was going to miss.”

The Eagles managed to stay ahead thanks to Chad Styles’ back-to-back 3-pointers, giving them a 30-26 lead at the half.

The Eagles came out of the half with a composed mindset, which created a steady offensive rhythm. Wise and Johnson added Cosby’s first 10 points of the second half to give it a 40-28 lead.

Johnson continued his scoring in the third with two more triples, but the Cyclones executed a 13-3 run to cut Cosby’s lead to a 46-41 margin going into the fourth.

As Elizabethton began to gain momentum and have their crowd on its side, the Eagles managed to never let go of their lead.

“We have been doing a much better job in our press offense,” Brooks said. “We secured the ball in the final minutes whenever Elizabethton was looking to grab the lead. We didn’t let them, though. We did a great job at taking care of the lead.”

Wise and Johnson combined for 15 points in the final eight minutes to push Cosby to victory.

The Cyclones had the deficit cut to 63-59 with 25 seconds remaining, but could not find anymore scoring after.

Cosby remains on the road to start this week, as it’ll travel to Pigeon Forge for a 7:30 p.m. tip on Tuesday.