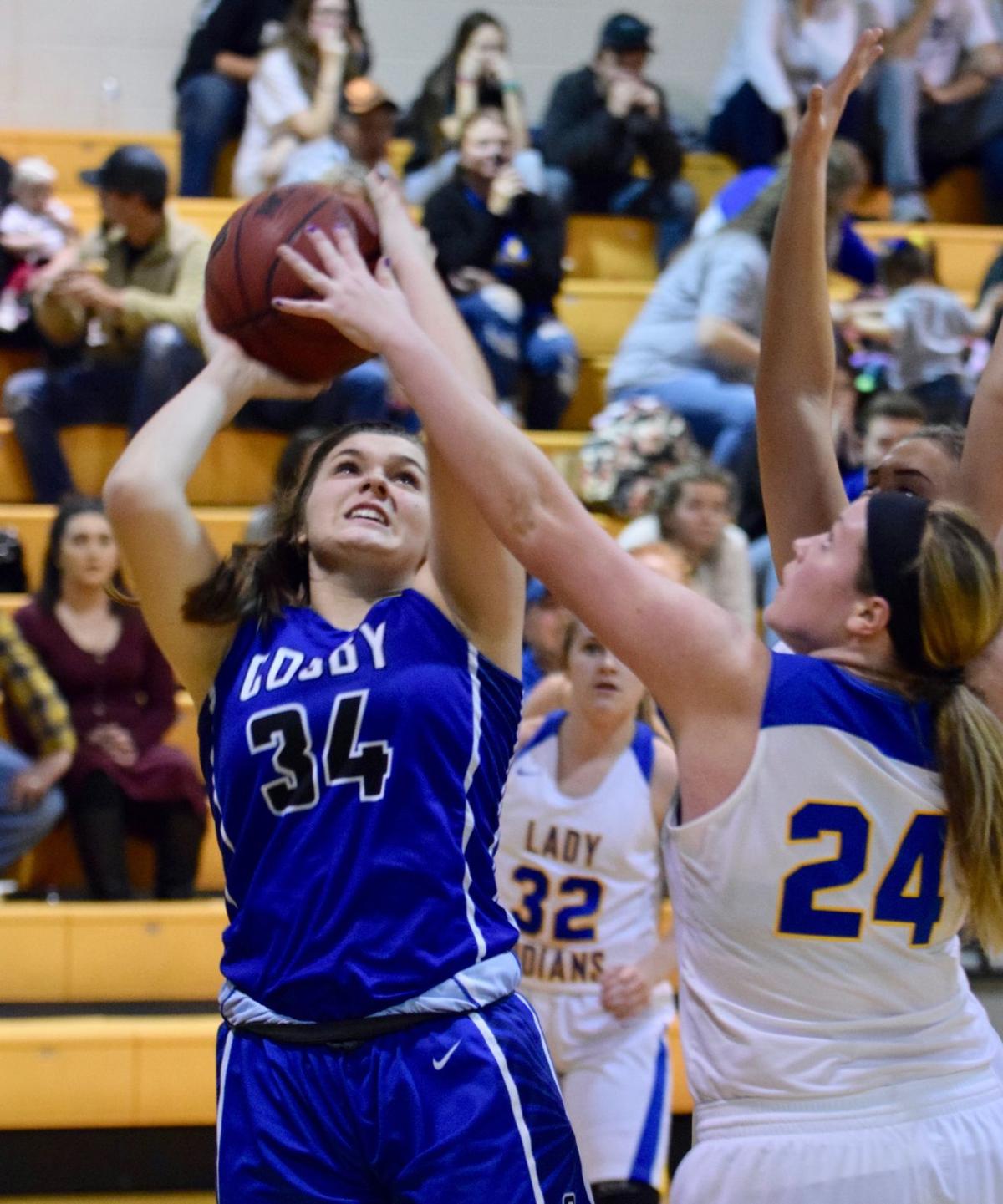 Cosby’s Sabrina Keller goes up for a shot on the low block during Friday’s win at Hancock County. 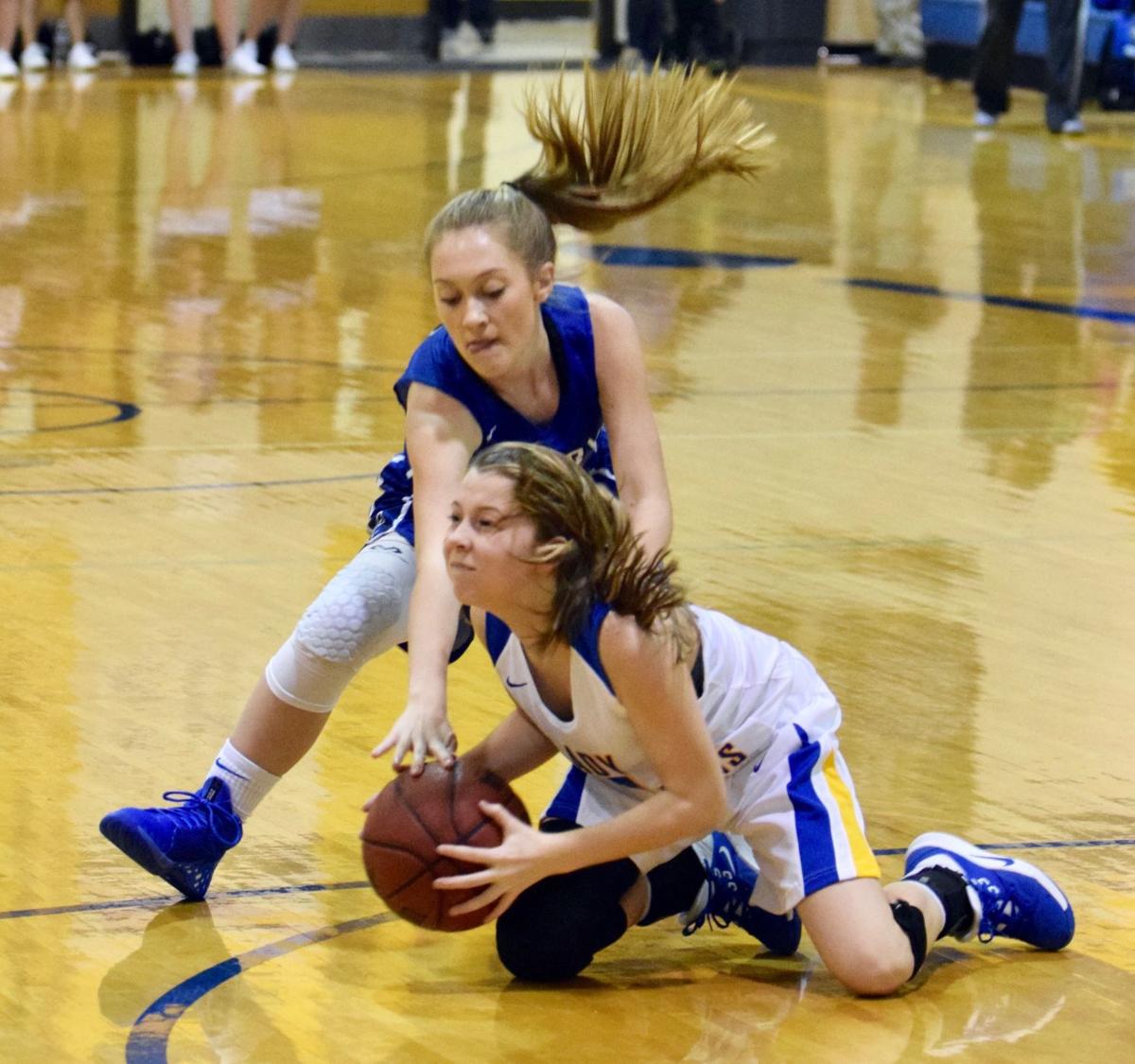 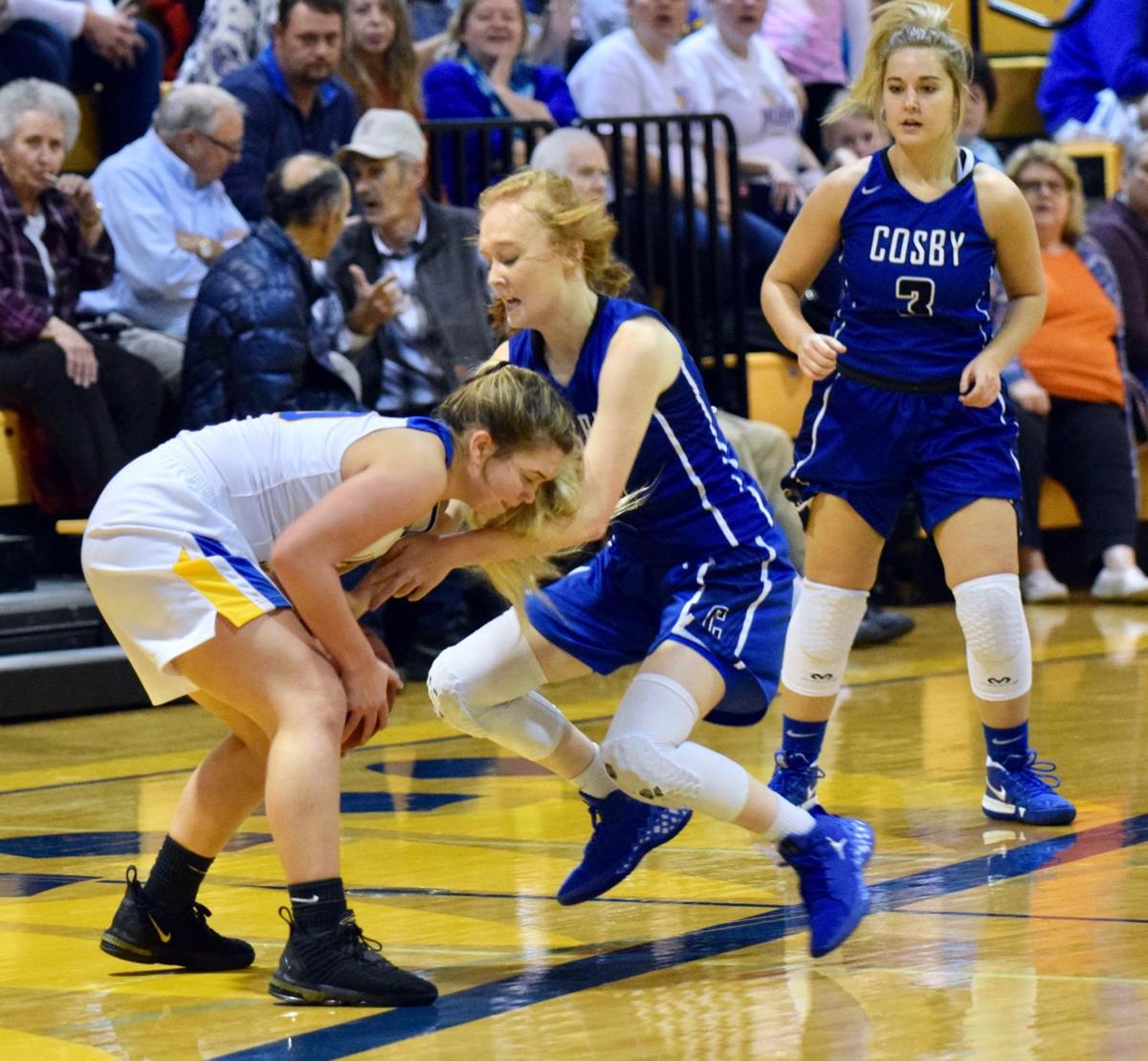 Cosby’s Sabrina Keller goes up for a shot on the low block during Friday’s win at Hancock County.

SNEEDVILLE—As tough as practice was after Monday’s loss, Cosby still turned in a better defensive performance than head coach Cody Lowe could have envisioned.

The Lady Eagles didn’t allow any field goals for nearly three quarters, repeatedly forcing turnovers and tough shots as they rolled to victory at Hancock County 49-10 on Friday night.

Until 11 seconds remained on the third quarter, Cosby (10-7, 5-0 District 2-A) didn’t give up any field goals as the only points had come on a 4-of-9 effort from the free-throw line. Other than that, Cosby’s press wreaked havoc on the Lady Indians virtually the entire night. Hence, the 1 point Cosby surrendered the entire first half.

“We don’t talk about holding somebody to 1 point at half. That’s not realistic. But we’ve done a really good job this week working defense,” said Lowe, who has coached Cosby to 32 consecutive district wins since taking the reins in 2017. “Three tough practices in a row, and I thought that translated to tonight. I thought that was the hardest we’ve played all year long.”

Offensively, the Lady Eagles were fairly balanced with just one player in double figures. Leia Groat fired in 13 points to lead all scorers, and she already had 10 of that by halftime.

But her three 3-pointers weren’t the only positive she brought to the table.

Bralyn McGaha helped revive Cosby in the third quarter, stealing a pass and finding Kinley Coggins ahead of the pack to draw the transition foul. Groat came up with the rebound as the second free throw bounced out, and the Lady Eagles eventually worked it to Gracie Myers for a 10-foot jumper before Groat buried her third 3-pointer to make it 40-3.

“We knew it was a big rivalry coming in and we knew we had to bring energy,” Groat said, while agreeing practice has been tough throughout the week. “It was very intense and very physical but we needed it, and we need it for the long run.”

By halftime, Groat had already hit a pair of 3-pointers from the left wing. The first built a 10-point lead in the first quarter as the Lady Eagles took a 12-1 advantage to the second. After grabbing an offensive rebound and driving to the hoop to open the second quarter, her next 3-pointer made it 21-1.

Coggins, who buried her first 3-pointer in the second quarter, hit from deep again for Cosby’s first field goal of the second half — coming with 4:40 in the third quarter for a 33-3 cushion.

And while McGaha hit a couple of free throws in the early going, her hustle began to pay dividends quickly in the second quarter. It started when she finished a transition layup through contact. After missing the free throw, McGaha grabbed her own miss and drew another foul. And with 1:32 in the opening half, McGaha buried a 3 from the left corner for a 28-1 advantage, which grew to 30-1 at halftime after Ali Smith pulled up for a baseline jumper.

It took Myers less than a minute to drain Cosby’s opening 3-pointer, coming from straight away. But it was the 2:35 mark of the opening frame before Sabrina Keller ended the field goal drought by taking a pass in the paint and finishing for a 7-0 lead.

Keller finished with 9 points which included an and-one in the third quarter to finish as Cosby’s second-leading scorer.

“That’s the best game she’s played,” Lowe said. “She’s an undersized post player but we play her in the post I thought she did a really good job of finishing around the basket and being strong. he keeps playing like that, it’ll be hard to keep her out of the lineup.”

Devion Hall and Tia Way both scored in the fourth quarter to match Smith with 2 points. McGaha finished with 8 while Coggins added 7 and Myers had 6.

The Lady Eagles stay on the road with trips to Elizabethton tonight and Pigeon Forge on Tuesday. Both games are set to begin at 6:30 p.m. before next Friday’s conference tilt at Jellico.