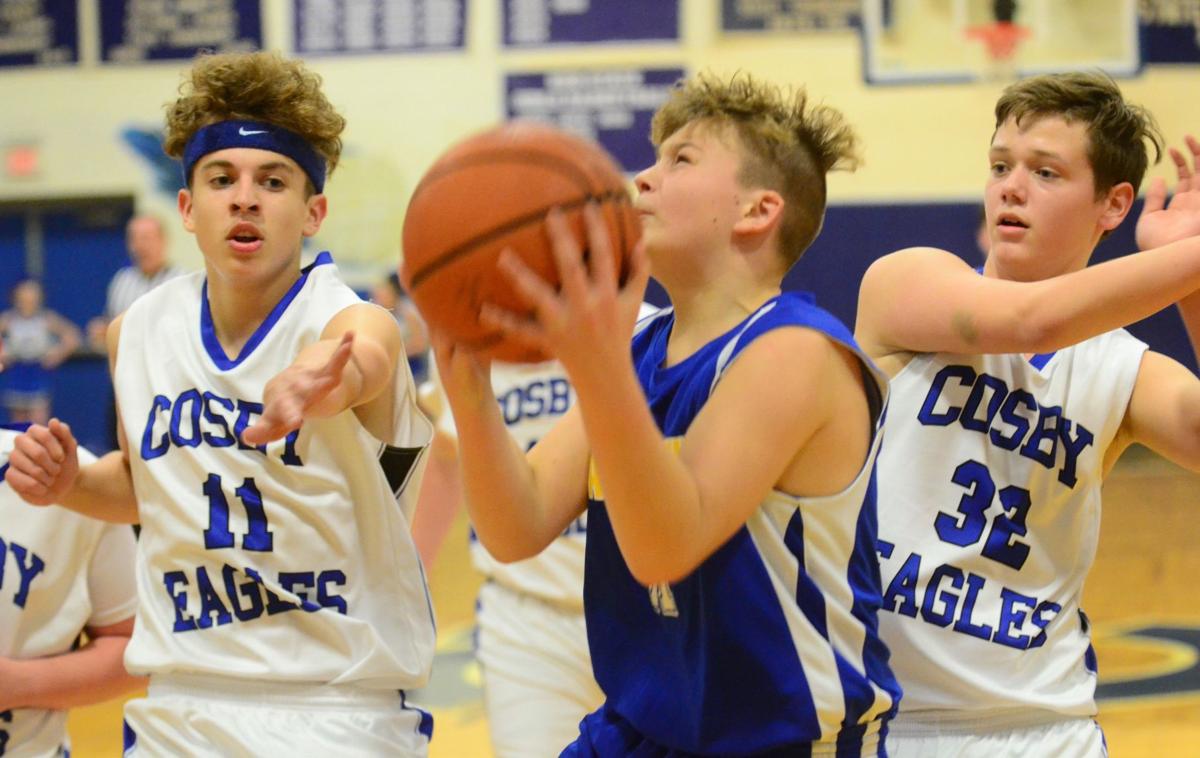 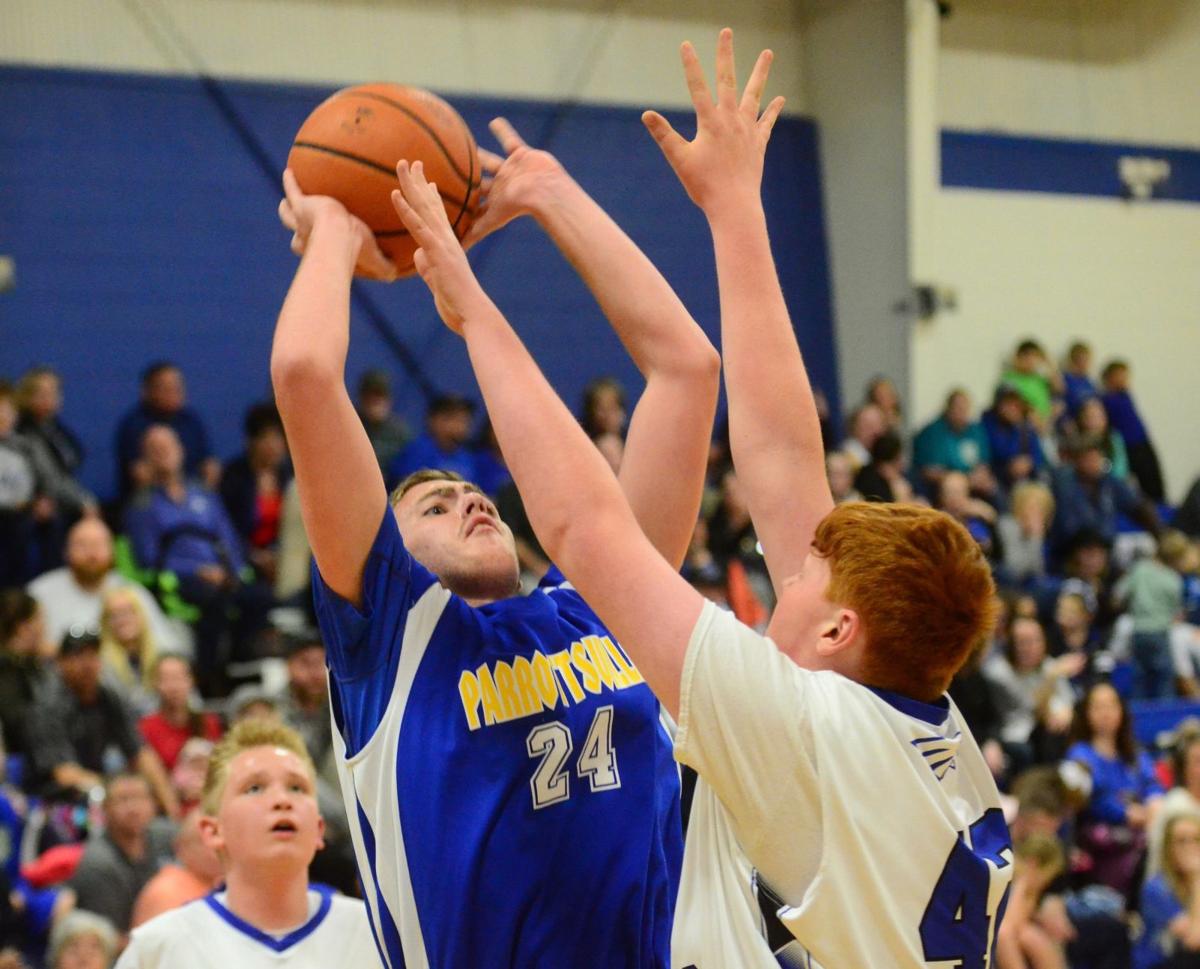 Parrottsville’s Leland Sartain (24) goes up for a shot on the low block over Cosby’s Aiden Whaley (right) on Monday night.

Parrottsville’s Leland Sartain (24) goes up for a shot on the low block over Cosby’s Aiden Whaley (right) on Monday night.

COSBY—Parrottsville and Grassy Fork opened the season as two of the top favorites for the year. That’s going to hold true through the final date of the regular season.

Both the Parrotts and Ravens remain deadlocked for the top spot after Monday night victories over Cosby and Centerview. They’re only losses of the season are to each other, meaning a victory by each on Thursday will send them into the postseason each vying for the No. 1 overall seed in the upcoming elementary tournament.

Also in boys’ action on Monday, Edgemont is a win away from locking down the tightly contested third seed for the tournament. Only Cosby has a chance to challenge the Panthers for the spot, but will need help from Parrottsville to do so.

On the girls’ end, Bridgeport could lock up the top seed going into the postseason on Thursday, but will have to get past Grassy Fork, who currently sits third in the standings. The Lady Parrotts could still challenge the Lady Rockets for the top spot with a win of their own and a Grassy Fork victory to close the season on Thursday.

The Cosby Eagles put up a strong fight, but the Parrotts out of Parrottsville found a way to grind out a much needed victory in their chase for the top seed going into the postseason.

Parrottsville topped Cosby on the road with a 46-38 victory on Monday, leaving them one win away from securing the No. 1 seed going into the postseason later this month.

The Parrotts were led in scoring by Logan Hommel’s game-high 14-point performance. Cooper Kelley joined him in double figures with 13. Cosby was led by Greycin Cobble, who had 11 points in the loss.

In a back-and-forth first quarter both teams were knotted up at 12, but Parrottsville broke the tie to take a narrow 24-20 lead into the half. Both teams struggled to score in the fourth, combining for just 11 points in the frame, but Parrottsville still managed to extend its lead to a 31-24 advantage going to the fourth.

Keeping the lead intact, Hommel ensured his team would remain on top with seven points in the fourth. The Parrotts staved off any comeback attempt by the Eagles to grind out the 8-point road win.

Parrottsville will wrap up the season on Thursday with a trip to Edgemont for a 6 p.m. tip. Cosby will also be on the road as it has an important matchup with Northwest that could carry postseason seeding implications. That game will tip off at 9 a.m. at Northwest Elementary.

Getting off to a strong start to the night, the Parrottsville Lady Parrotts soared past the Cosby Lady Eagles for a 45-21 win on the road, Monday.

Blake Clevenger led all scorers with 18 points for the Lady Parrotts. Cosby was led by Gracie Jenkins’ seven points.

Parrottsville opened the game with a 13-4 lead after the first period, and took a 27-10 lead into the half. Clevenger had 10 of her game-high total at the break, with eight of those points coming in the second quarter.

The Lady Parrotts continued to extend their lead in the second half, pulling ahead by a 37-14 margin before going on to close out the 24-point win on the road.

The Edgemont Panthers helped their case for a top three finish at season’s end with a road win over the Northwest Patriots on Monday.

Leading the Panthers to the 52-39 victory was Jerome Cofield, who had 17 points. Two more Panthers posted double figures as Kaden Hawkins and Ethan Watson each had 10 points. Northwest was led by Benito Torres’ game-high 20 points, while Rolando Campos-Rodriguez also hit double figures with 15.

Both teams sat at an 8-all stalemate to close the first quarter, but Edgemont pulled ahead before the half to take a 22-17 lead into the break.

The Panthers extended their lead to open the second half, as Cofield posted nine of the team’s 18 points in the third to help give us team a 40-26 lead going into the fourth.

With a comfortable distance in hand, the Panthers were able to manage their lead in the fourth en route to a 13-point victory and another major road win.

Both Edgemont and Northwest will be at home to close the regular season on Thursday. The Patriots host Cosby in a 9 a.m. tip, and Edgemont hosts co-league-leader Parrottsville for a 6 p.m. tip-off.

With a narrow lead going into the fourth, the Edgemont Lady Panthers closed on a strong note to cap a 29-15 victory over the Northwest Lady Patriots on Monday.

Led by Logan Edmonds’ 10 points, the Lady Panthers emerged victorious with a big win on the road. Northwest was led in scoring by Brooke Williams, who had six points.

Edgemont held a 10-4 lead after the first period, and maintained a 14-9 lead at the half. Northwest continued to chip away at the lead to start the second half, getting within three by the end of the third. It would be the closest the Lady Patriots could get, though.

The Lady Panthers put up 13 points in the fourth, as a balanced scoring effort led them to a 14-point win on the road.

Taking a large halftime lead, the Grassy Fork Lady Ravens maintained their distance in the second half to secure a 47-29 victory over the Centerview Lady Falcons on Monday.

Grassy Fork led 12-4 after the first period, and built a 28-9 lead by the half. Hance and Miller combined to score 17 of the Lady Ravens’ first-half points.

Thanks to a 10-point outing in the third from McMahan, Centerview made up ground in the third quarter, cutting the deficit to 14, but Grassy Fork carried a 37-23 lead into the fourth and rode out the final six minutes on the way to an 18-point win at home on Monday.

Kobe's high school friend: He changed the course of my life

Grassy Fork pitched a shutout in the second half to secure a 58-13 win over the Centerview Falcons on Monday.

Cyler Davis led all scorers with 18 points, as 10 different Ravens stuffed the score sheet. Centerview was led by Luke Jarnigan with four points.

Grassy Fork gave up 13 points in the first half, and nothing more. It led 14-5 after the first period, and doubled up the Falcons to take a 26-13 lead into the half. Davis had 10 of his game-high total in the first half.

The second half was all black and red. The Ravens outpaced Centerview 22-0 in the third, and outscored the Falcons 32-0 for the second half to pick up the 45-point win in their final home outing of the year.

The Bridgeport Lady Rockets are now a win away from locking up the top seed in the upcoming elementary tournament later this month after a 71-7 win on the road over the Smoky Mountain Lady Bears on Monday.

With 11 different players posting scoring figures, Kionna Williams and Ava Wheeler each led the Lady Rockets in scoring with 12 points apiece in the victory. Smoky Mountain was led by Alyssa Sussalla’s four points.

Bridgeport led 21-7 after the first period and didn’t allow another score from Smoky Mountain the rest of the way. The Lady Rockets carried a 39-7 into the half before finishing the game with 32 points in the third to take the 71-7 triumph.

Despite a close game at the end of the first, the Bridgeport Rockets put on more steam in the final three frames to take a 52-15 win on the road over Smoky Mountain on Monday.

The Rockets led 8-6 after the first period, as Smoky Mountain’s defense came out strong to keep it a close game through the first six minutes. The game shifted entirely in Bridgeport’s favor in the second, though, and stayed with the Rockets the rest of the way.

Bridgeport led 23-10 at the half, and came out strong to start the second half by taking a 37-13 lead into the fourth. The Rockets put up 15 more in the fourth period, as they closed out the 37-point win at Smoky Mountain.

With one game left on the docket, both teams will look to close the regular season on a positive note. Bridgeport hosts co-league-leader Grassy Fork on Thursday, and Smoky Mountain takes to the road to face Del Rio. Both contests are set to start at 6 p.m.