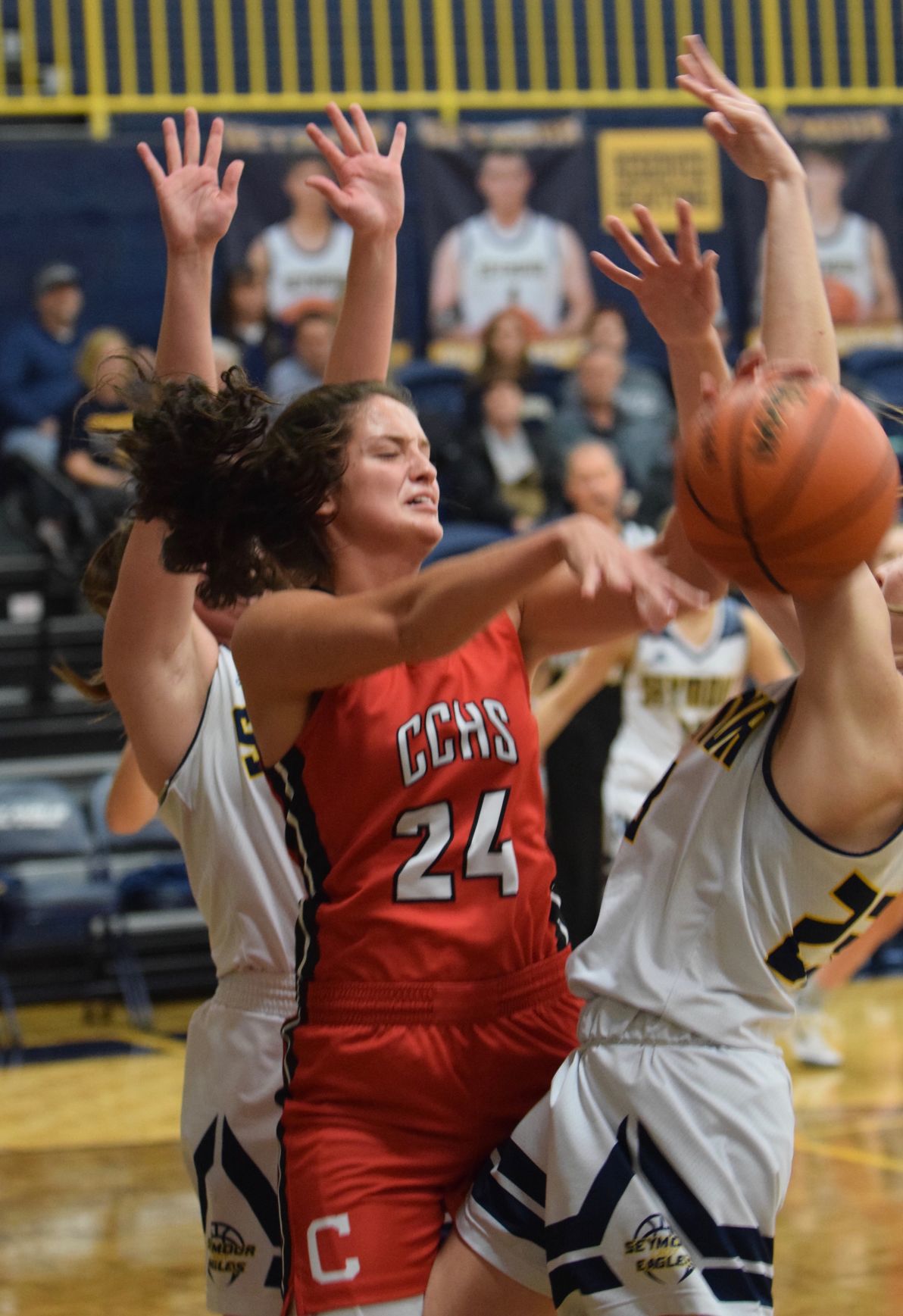 Lady Red senior Heavan Baxter passes the ball out of the paint during Friday’s District 2-AAA matchup at Seymour. 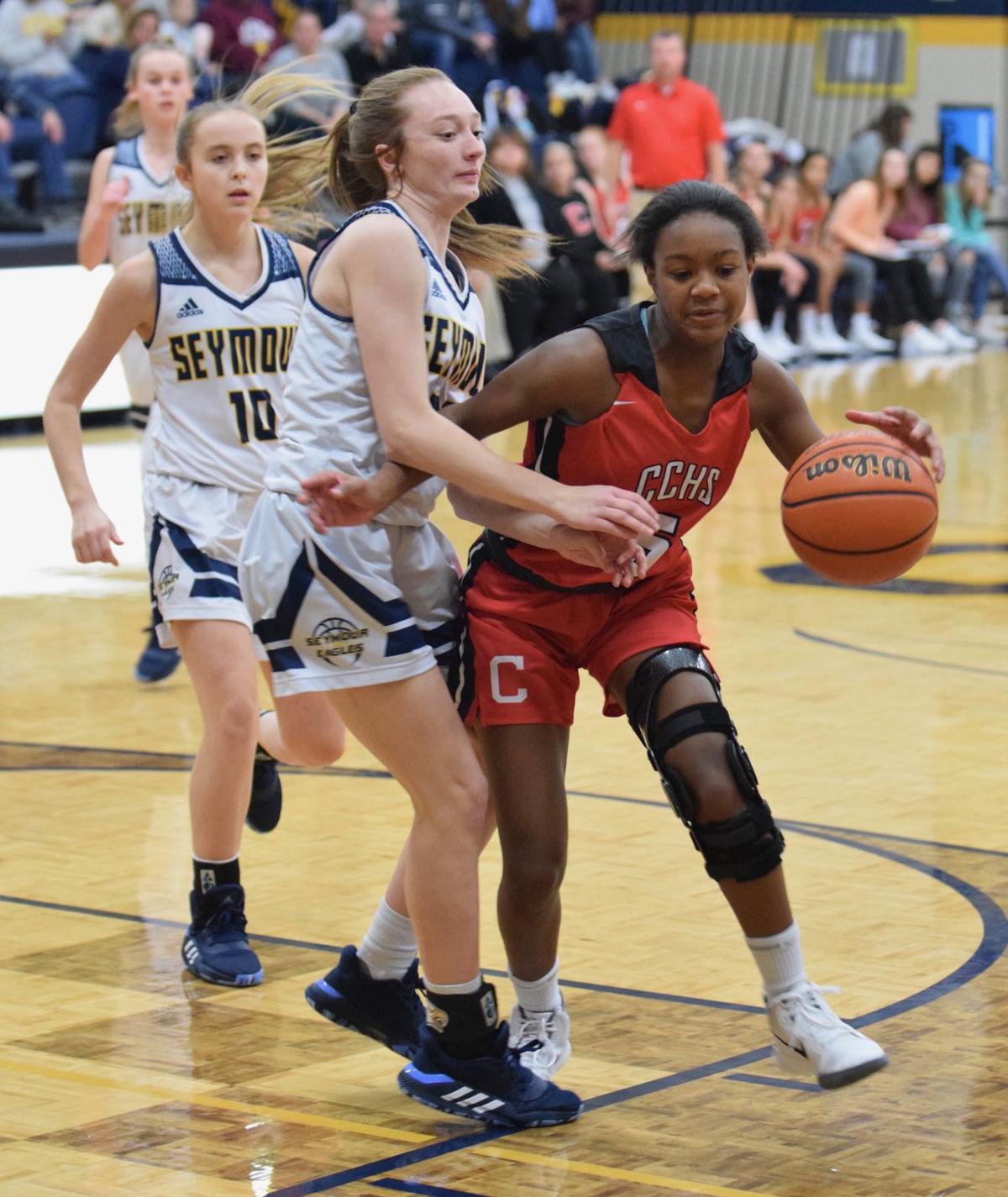 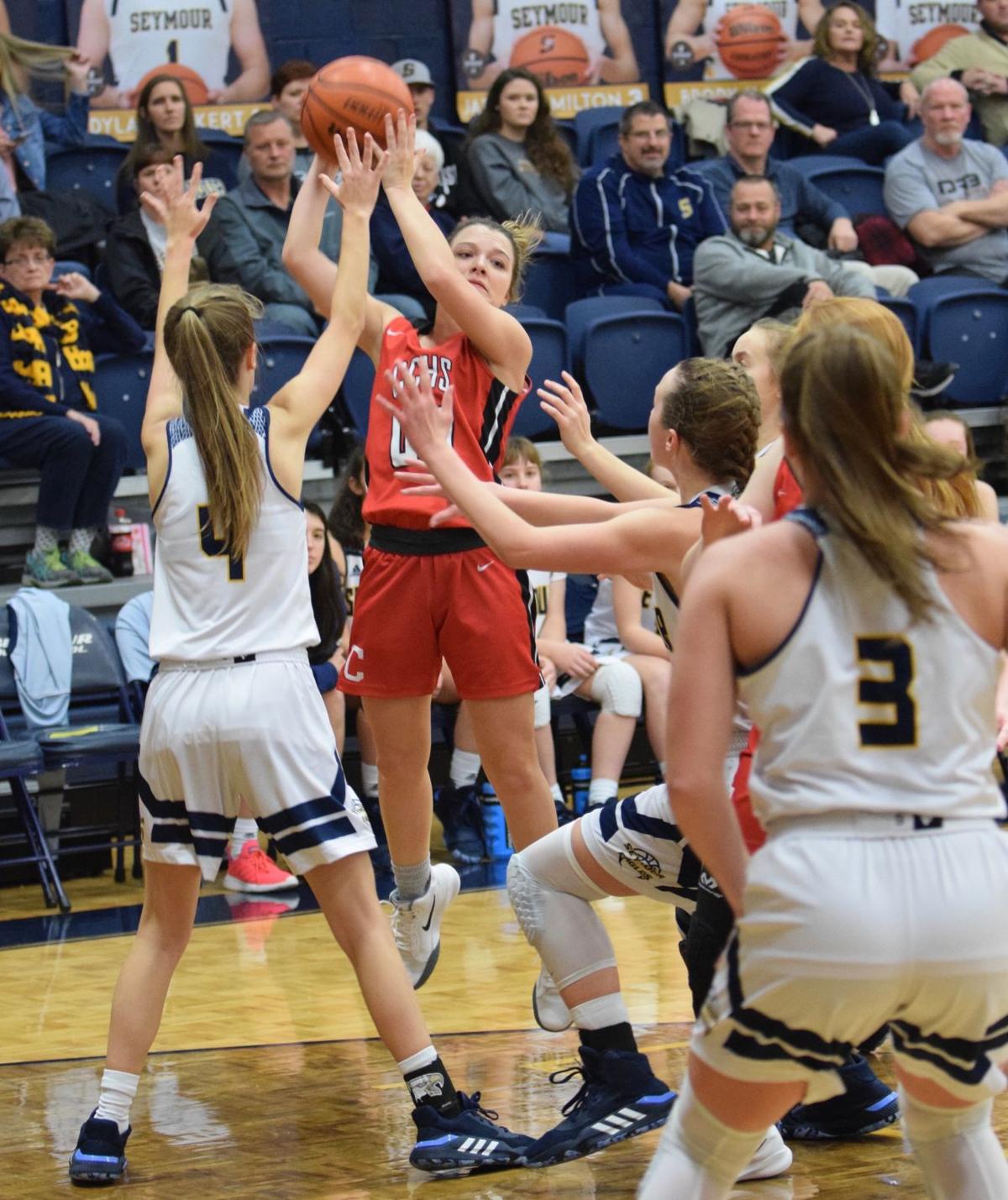 Cocke County sophomore Sydney Clevenger attempts to dish a pass into the paint during Friday night’s matchup at Seymour.

Lady Red senior Heavan Baxter passes the ball out of the paint during Friday’s District 2-AAA matchup at Seymour.

Cocke County sophomore Sydney Clevenger attempts to dish a pass into the paint during Friday night’s matchup at Seymour.

SEYMOUR—Maci Pitner proved in crunch time why Cocke County respected her abilities so much.

As the clock ticked under two minutes with the score tied, Pitner gave the home fans one last highlight as she launched an off-balance jumper from just outside the lane. Seymour never trailed again once the shot fell, and the Lady Eagles held off Cocke County 52-50 on Friday night.

Pitner fired in 24 points for Seymour (4-6, 2-1 District 2-AAA) to lead all scorers, knocking down four 3-pointers. The last of her four triples capped a 7-0 run which put the Lady Eagles ahead 36-35 late in the third quarter. Emma Watson’s layup off an inbounds pass allowed Seymour to take a 38-37 lead to the fourth quarter, and Pitner’s final shot came with 1:55 on the clock.

“We were so concerned about her and knowing where she was we let our zone get too wide and their other guards started to wiggle their way in there and get easy looks. That was disappointing,” Lady Red coach Jeremy Byrd said. “She’s a great player, not going to take anything away from her. That was our pregame speech, that we have to try and contain her and we didn’t do it very well.”

Katelyn Waggoner finished off an assist in the paint for a 52-49 lead in the closing seconds.

Cocke County (6-5, 2-2) never led in the fourth quarter but pulled even twice, the second coming at 48-48 when Sydney Clevenger freed herself just enough to drain a 3-pointer from the top of the key. Clevenger hit the front end of a two-shot foul with 5.6 seconds left, but she just barely missed the rim upon intentionally missing the second, giving the ball back to Seymour. The Lady Red couldn’t get a good shot off from halfcourt after Seymour missed the front end of a one-and-one. Clevenger finished with 9 points.

Paige Niethammer, who recorded a double-double with 14 points and 12 rebounds to lead CCHS, finished in the paint three times to accompany a layup by Cofield for a three-point lead in the third quarter. Gracie Gregg then gave the Lady Red their largest lead at 35-29 when she busted a 3-pointer with 4:07 in the frame.

“Paige is getting better every time she touches the floor. I knew she would. She’s got that athletic ability,” Byrd said. “She’s really strong she has great hands, she’s getting some time out there and I expect her to get lots of minutes because she’s producing.”

Despite falling behind in the second quarter, offensive rebounding kept CCHS in the game as Niethammer put back a miss and Clevenger drained a second-chance 3-pointer from straight away. Camryn Halcomb added another putback with 12 seconds on the clock to cut Seymour’s halftime lead to 25-24.

2020 Bears vision: Need is dire to get far greater contributions from TE corps

“We really fought hard on the boards all night long I felt like, got ourselves opportunities and I was proud of them for that,” Byrd said.

Halcomb helped ignite Cocke County’s early offensive spurt, which began when Cofield drove to the basket with 2:20 in the first quarter. The Lady Red then erupted for three baskets in the final minute of the opening frame as Halcomb busted a 3 before Niethammer’s putback and Clevenger’s off-balance runner with 3 seconds put CCHS ahead 13-10 after one.

Neithammer capped the 11-0 run with her layup in the opening minute of the second quarter for a 15-10 lead.

Emma Watson revived Seymour with her second-quarter triple before Pitner, whose early 3-pointer gave the Lady Eagles a 10-4 lead, hit again from the right wing for a 19-16 lead. Seymour led the rest of the opening half thanks to layups by Pitner and Waggoner.

Watson and Aebri Graham both scored 10 points for Seymour.

The Lady Red return home to host Jefferson County on Tuesday night, with tipoff set for 6 p.m. at the Cocke Pit.