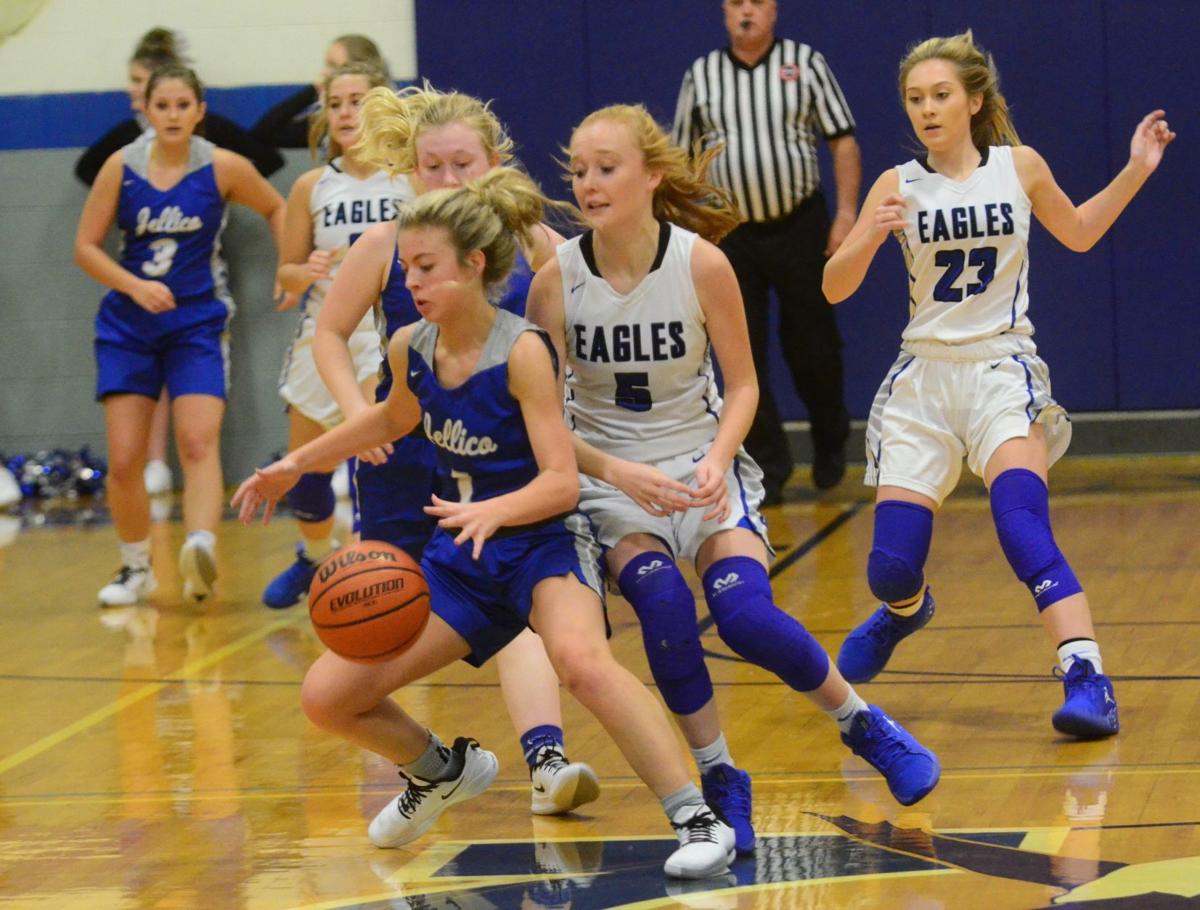 FILE — Cosby junior Leia Groat defends at mid-court in a victory over Jellico earlier in the season. Groat had three points in Saturday’s loss at Elizabethton. 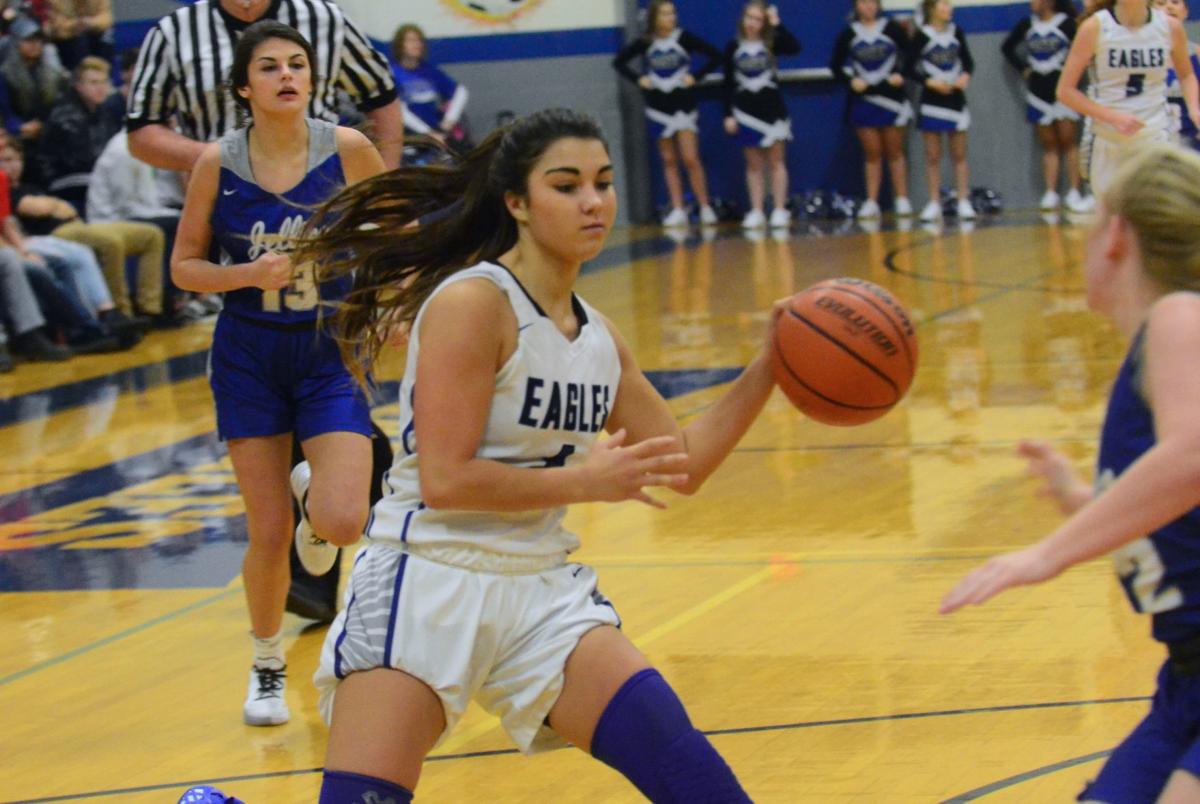 FILE — Cosby junior Bralyn McGaha looks to dish the ball into the paint during a win over Jellico earlier in the season. McGaha led the Lady Eagles with 16 points in a loss at Elizabethton on Saturday.

FILE — Cosby junior Leia Groat defends at mid-court in a victory over Jellico earlier in the season. Groat had three points in Saturday’s loss at Elizabethton.

FILE — Cosby junior Bralyn McGaha looks to dish the ball into the paint during a win over Jellico earlier in the season. McGaha led the Lady Eagles with 16 points in a loss at Elizabethton on Saturday.

Traveling for a road game on a weekend after just playing the night before can take a toll on players, and so can the toughness of the schedule. Cosby has matched up with numerous opponents in higher classifications already this season, including the Elizabethton Lady Cyclones who earned a 67-33 win over the Lady Eagles on Saturday.

“This is another frustrating game,” Cosby’s head coach Cody Lowe said. “We can’t sit around and think about this game. We have to continue to work and improve. We have a lot left on our schedule and even more tough opponents. We have to take this and move on for us to get better.”

Cosby (10-8) has found its District 2-A matchups to come a little lighter in some cases because of teams like Elizabethton (10-7).

The Lady Eagles have met with Grainger, Morristown East, and Maryville in games that have built them into the competitive team they are in the district, but are still looking to improve before the postseason comes next month.

“It starts with me,” Lowe said. “It’s not just one of us, it’s all of us. We haven’t been able to put together a complete game against these opponents that we have faced outside of our district. We know we are facing some of the top talent in our area, but I want us to be able to compete with them from start to finish. I have to do a better job preparing us for that.”

Unfortunately, Cosby has been unable to grab a win from many of these higher class teams, but that does not mean all is lost. Lowe has found his girls playing much smarter and more physical during district games due to the toughness of the non-district schedule.

“We don’t expect to go undefeated against all these non-district teams,” Lowe said. “It has to help us in the district, though. I have seen us a little more competitive in practice and in our district because of the competition we are facing. We have to know this is a positive playing these teams that are looked at as the top teams.”

Right now, the results aren’t necessarily the be-all-end-all in the Lady Eagles’ assessment for the season. After all, come late February and early March, regular season records no longer matter.

However, Cosby will have to put together a better performance than it did against Elizabethton if it hopes to reach its goals in the postseason, and follow up last year’s region title with another strong outing.

Bralyn McGaha was the only Lady Eagle to enter double digits with a 16-point effort, but it did not match Elizabethon’s scoring. The Lady Cyclones’ triple threat all scored double figures as Morgan Headrick tallied a game-high 22. Katilin Bailey followed with 15 points and Kaylen Shell included 11 points.

The first quarter belonged to Elizabethton after a close start of 4-4. The Lady Cyclones took off on a 10-0 run in the middle of the quarter to build a double-digit lead.

Cosby could only cut the deficit to single digits once after a quick run, but the Cyclones knocked a 3-pointer down before the quarter ended for a 20-9 advantage.

The advantage grew for Elizabethton as Cosby struggled to find a run to erase the deficit.

Headrick and Bailey combined for 24 points at the break to aid Elizabethton’s 36-19 lead.

“We struggled in scoring tonight,” Lowe said. “I saw that in the first half and it continued into the second half. We have played so well in practice, but it hasn’t transitioned into the actual games. We have to work hard in practice and work hard during a game in all four quarters.”

The Lady Eagles came out of the half and continued to struggle from the field against Elizabethton’s defense, only scoring seven in the quarter.

The Lady Cyclones, on the other hand, continued to stay at a steady scoring pace after adding to their lead. Headrick continued her performance with seven points in the quarter to add to her total.

Cosby returns to action on Tuesday, as it continues its road stint with a trip to Pigeon Forge. Tip-off is slated for 6 p.m.