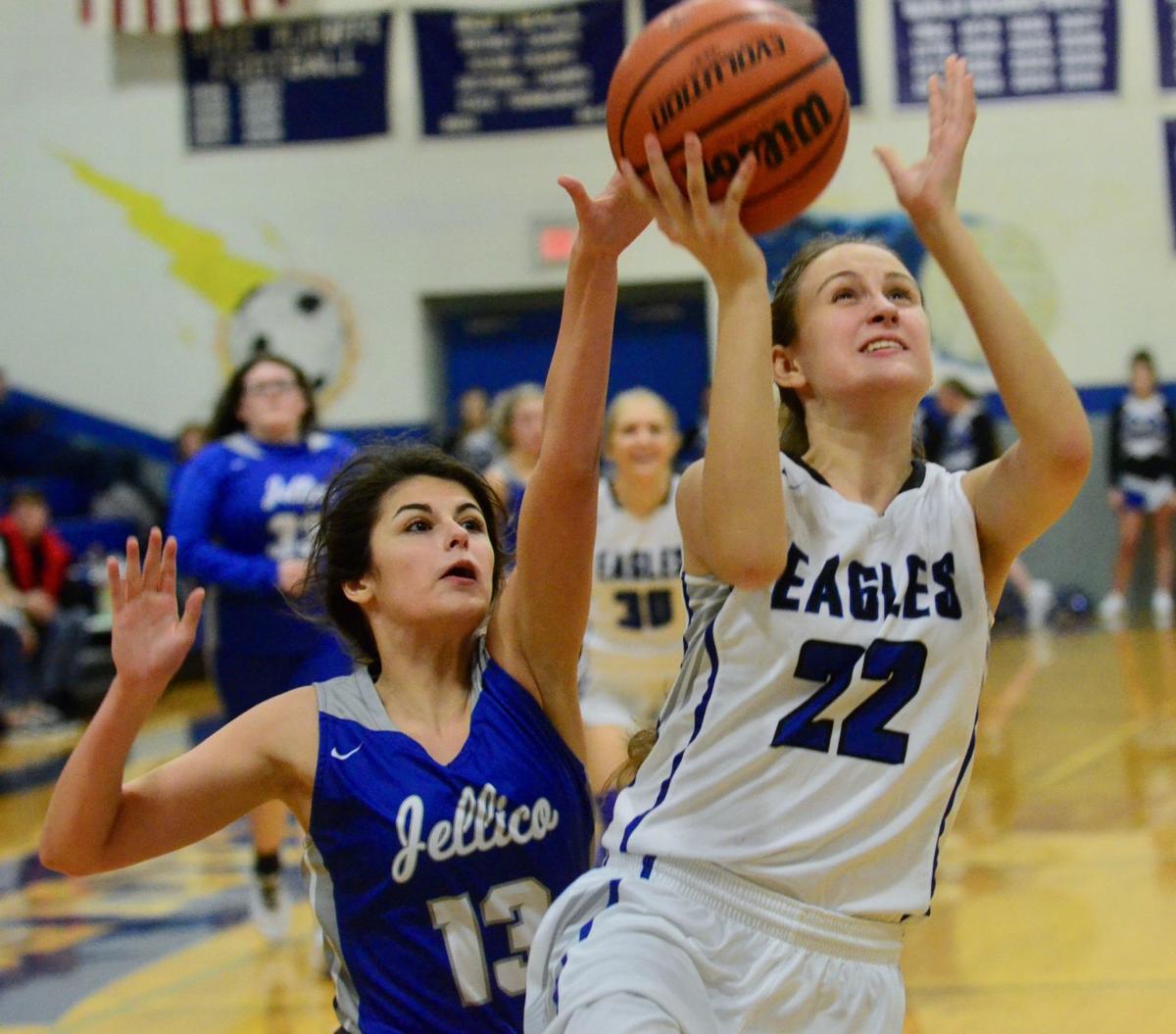 Cosby freshman Alison Smith goes up for a layup in transition during Friday’s District 2-A win over Jellico. 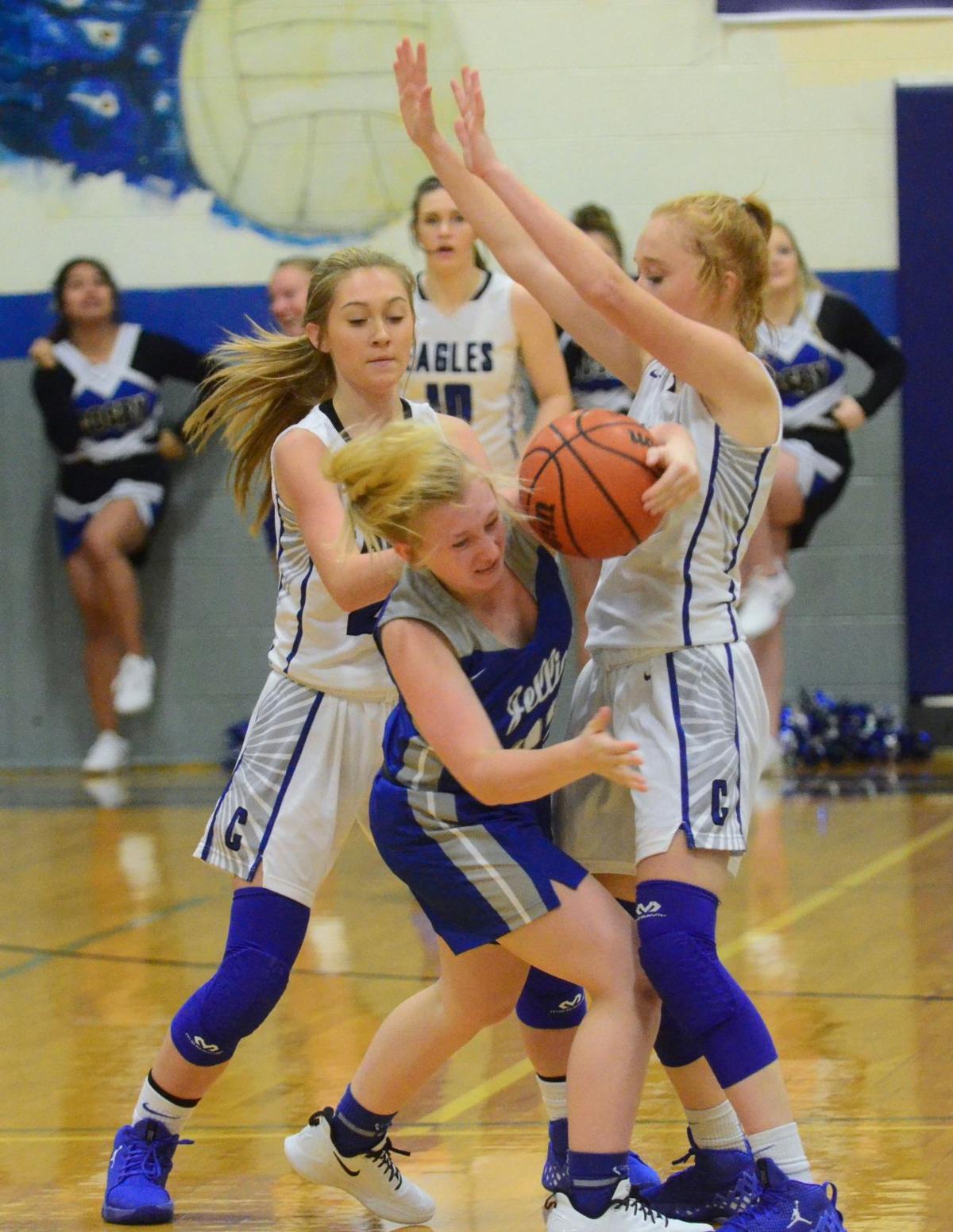 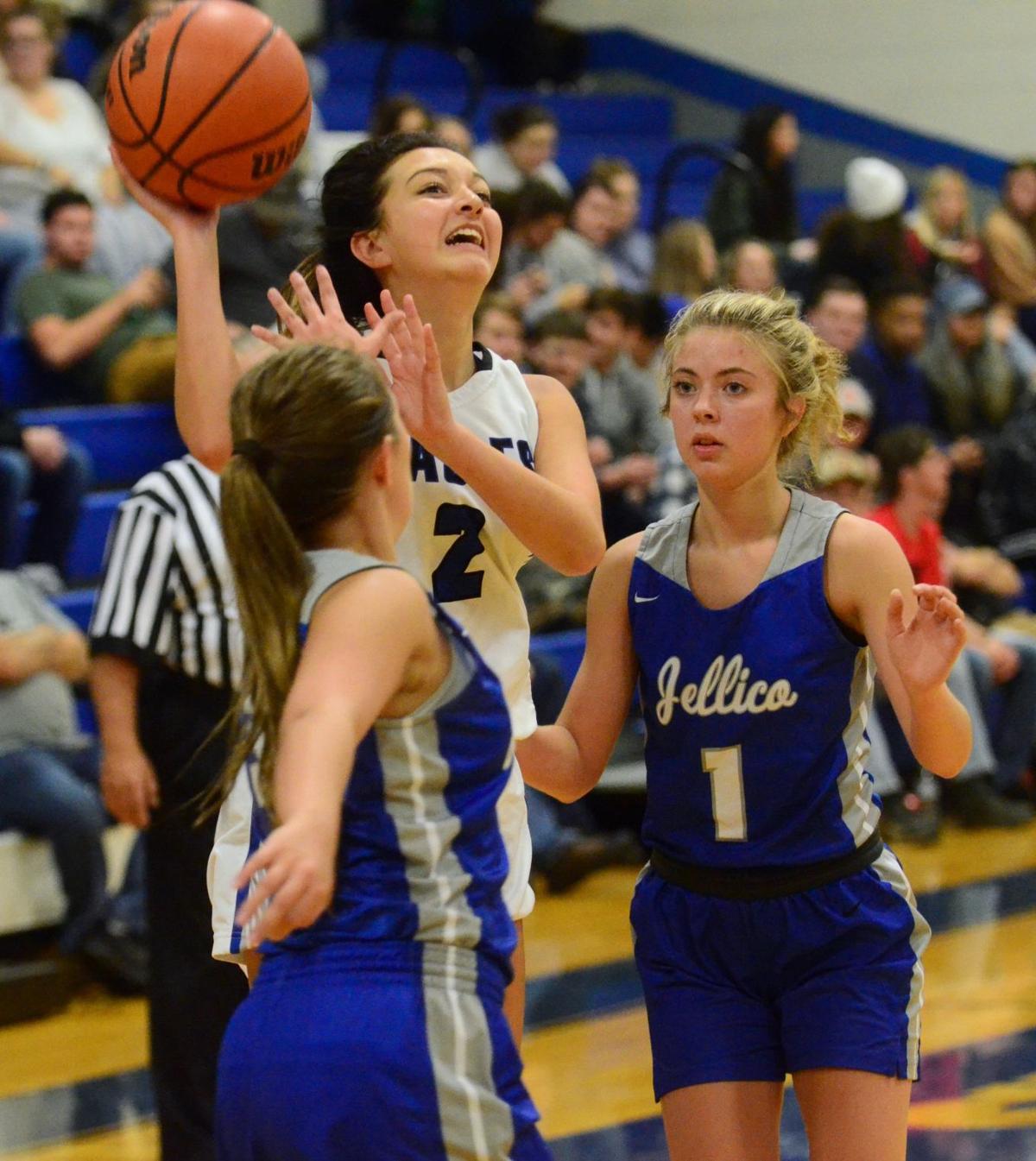 Lady Eagles' sophomore Gracie Jenkins puts up a shot between a pair of Jellico defenders on Friday.

Cosby freshman Alison Smith goes up for a layup in transition during Friday’s District 2-A win over Jellico.

Lady Eagles' sophomore Gracie Jenkins puts up a shot between a pair of Jellico defenders on Friday.

COSBY—The first District 2-A win of the season for the Cosby High Lady Eagles came with ease after a dominant performance on both sides of the ball on Friday night.

The Jellico Lady Blue Devils’ chances of stealing a game on the road against the Lady Eagles disappeared quickly after the first quarter. Cosby came out of the gate hot in the first quarter and only got hotter as the quarters went by to help conclude a 73-14 victory in their league opener.

“We had an extremely demanding and physical practice leading up to this game,” head coach Cody Lowe of Cosby said. “It was as tough as we ever practice. I wasn’t too pleased with our recent performance and knew we had to turn it around. We played as we practiced out here tonight.”

The dominant performance by Cosby (4-4, 1-0 District 2-A) against Jellico (0-6, 0-1 District 2-A) displayed the potential of the team after a struggling performance against Elizabethton on Tuesday. The Lady Eagles did not let up on either side of the ball as defense turned to offense quickly.

Cosby’s defense forced Jellico into 33 turnovers on the game, with many leading to scores in transition.

“We pressured the ball and it turned into some easy buckets for us,” Lowe said. “Jellico didn’t like that kind of pressure. Once we got out into transition, we passed the ball very well.”

Bralyn McGaha and Leia Groat led the Lady Eagles in scoring, as McGaha dropped 17 points and Groat followed with her 11 points. The two joined nine other girls in the scoring column for Cosby.

As the box score showed, Cosby put together a dominant performance in its first District 2-A game starting in the first quarter.

Groat put the Lady Eagles on the board first with her triple, but Jellico struck right back with a bucket inside. Cosby escalated its lead quickly, though, with eight-straight points for an 11-2 advantage.

After forcing Jellico to 13 first-quarter turnovers, Cosby’s lead grew to 19-2 before the first eight minutes came to a close.

“We emphasized on our defense tonight,” Lowe said. “We wanted our defense to lead to our offense, and that’s what it did for us. Whenever we can score in transition like that after playing great defense, we are hard to stop.”

The lead grew to 21 after Gracie Myers knocked one down from behind the arc. Shortly after, Groat nailed her third three of the first half leaving her shooting 100-percent from the perimeter.

From in the stands to in the game, Jared Veldheer’s journey leads to key backup role for Packers

The Lady Eagles began the second half on a 13-0 that included six points from McGaha. She went on to drop 11 points in just the third quarter before being substituted out after a 58-11 advantage by Cosby.

“This is what we have to do,” Lowe said. “We can’t let our foot off the peddle. We don’t want to let up and let a team get back in it. I know we had the big lead, but my bench came in and made some big shots, too.”

The 18-3 run by the Lady Eagles to start the second half separated them by 46 points heading into the final quarter.

Many of the underclassmen received their playing time in the fourth quarter for the Lady Eagles and added 15 more points to the lead for the 73-14 final.

Cosby will look to pick up two more district wins to open next week, as they’ll see Tennessee School for the Deaf and Washburn in back-to-back nights on Monday and Tuesday.