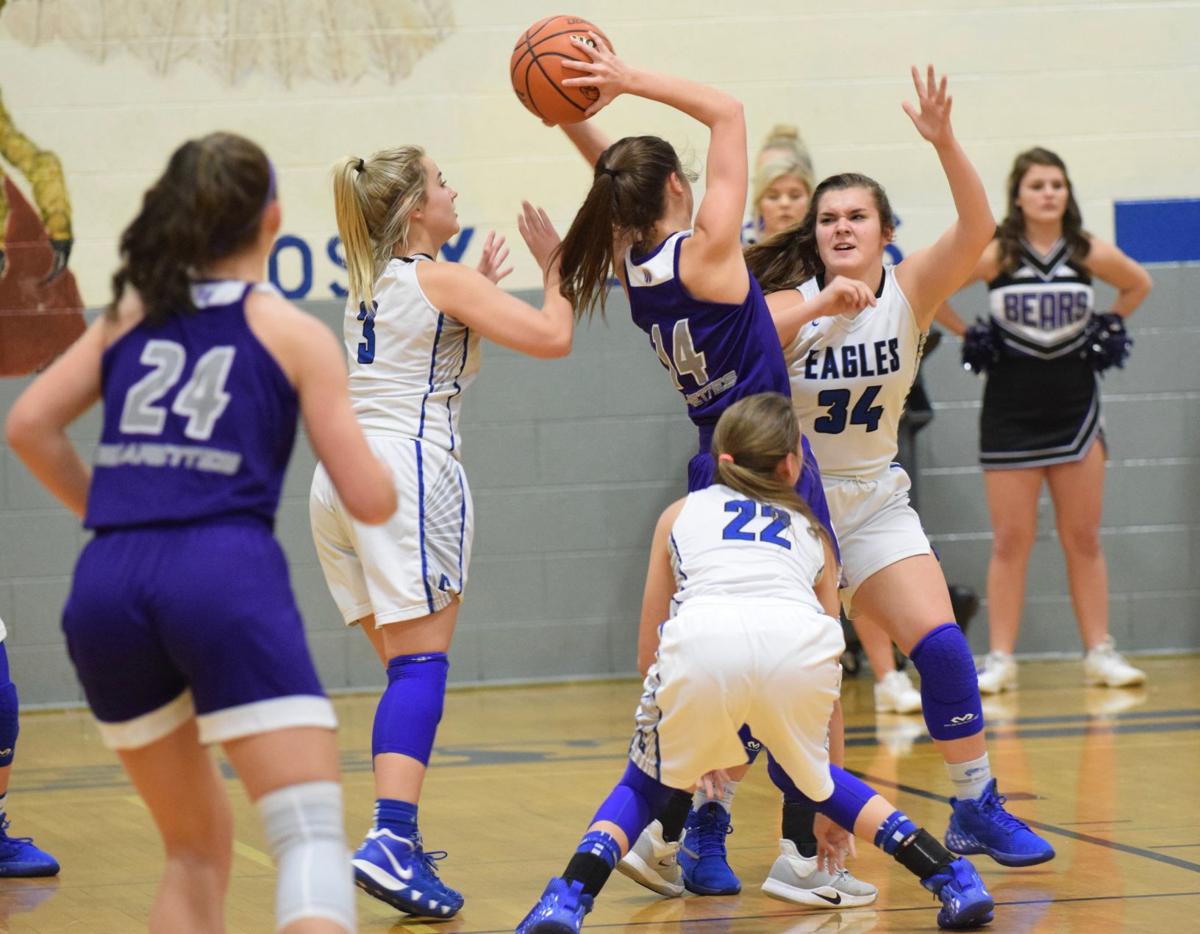 Cosby sophomore Sabrina Keller (34) defends a Sevier County player in the paint during Tuesday’s matchup with the Bearettes. 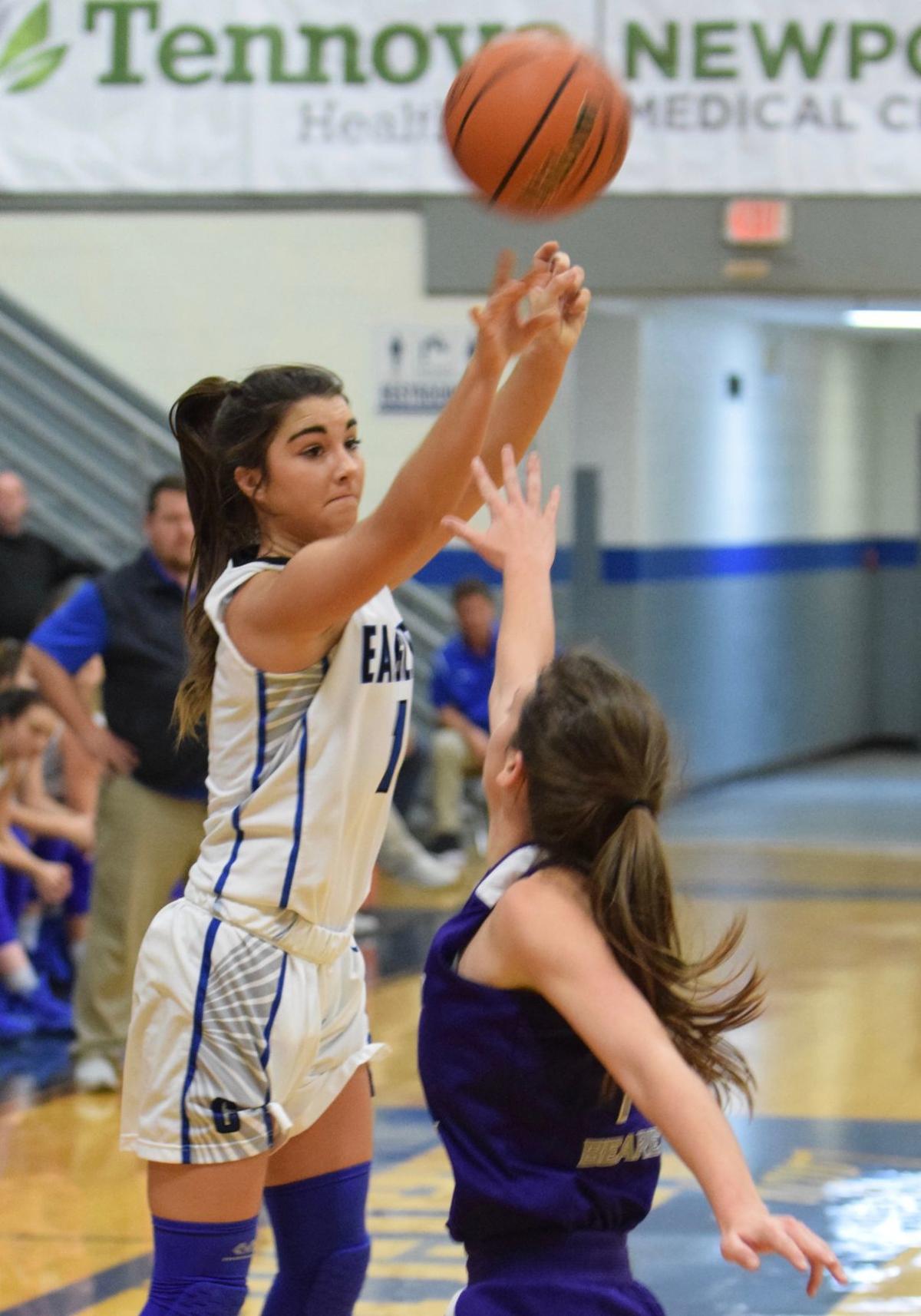 Cosby junior Bralyn McGaha puts up a shot over a Sevier County defender on Tuesday.

Cosby sophomore Sabrina Keller (34) defends a Sevier County player in the paint during Tuesday’s matchup with the Bearettes.

Cosby junior Bralyn McGaha puts up a shot over a Sevier County defender on Tuesday.

From the beginning, Sevier County patiently waited to get the shot it wanted, almost always in the paint. The Bearettes used their zone defense and the offensive glass to their advantage, rolling past Cosby 47-21 on Tuesday night.

Interestingly enough, no one scored in double figures for Sevier County (10-8). Emma Huskey and Mackenna Loveday both finished with 8 points to lead the Bearettes, and the two combined for three field goals in Sevier County’s opening 16-0 run. Huskey added a layup and a putback in the third quarter, and Loveday finished one layups in both the second and fourth quarters before adding two free throws.

Amanda Clabo had 6 of her 7 points from the field in the first quarter, scoring on her offensive rebound and driving to the basket twice. Shilah Whaley finished in the paint twice, one after an offensive rebound, and totaled 6 points.

Natali Shultz and Shelby Smith each hit from 3-point range once, Shultz giving the Bearettes a 24-5 lead in the second quarter. Smith’s right-wing triple built the lead to 45-21 as Sevier County finished the game on a 9-0 run.

Sevier County’s first 9-0 run ended Cosby’s third-quarter rally. Shelby Rolen scored through contact and Shultz banked in a floater, building a 35-17 lead going to the fourth. Neomi Lozano made it 38-17 when she grabbed the loose ball on an inbounds pass and took contact to score the layup.

Lauren Ford accounted for Cosby’s only two field goals inside the 3-point line. She buried a midrange jumper in the fourth quarter to pull the Lady Eagles within 38-21.

Sevier County’s 2-3 zone caused problems throughout the game. To put it in perspective, Cosby (12-10) didn’t hit a field goal until the 6:51 mark of the second quarter. Gracie Myers knocked down a 3-pointer to end the drought, but more than five minutes passed before the Lady Eagles got another bucket. That came when Ford put back a miss, and Bralyn McGaha buried a 3-pointer with 1:04 in the second quarter to make it a 25-10 game at halftime.

McGaha and Ford led the Lady Eagles with 8 points apiece, the former burying her second 3-pointer to open the third quarter. Ford’s 3-pointer and Sabrina Keller’s free throw midway through the third quarter closed the gap to 29-17, but Cosby couldn’t get any closer.

“The last two teams played zone against us and we struggled against the zone,” Lowe said. “Giving up offensive rebounds has been a problem all year, just same story. All I know is to keep working in practice and try to get better.”

Myers, who scored 4 points, sank a foul shot for Cosby’s first point late in the first quarter, and Sevier County took a 16-1 lead to the second.

The loss snapped a two-game winning streak for Cosby, which had just returned home from a 3-3 road trip. The Lady Eagles take a week-long hiatus before hosting Pigeon Forge on Tuesday, Jan. 28, at 6:30 p.m.