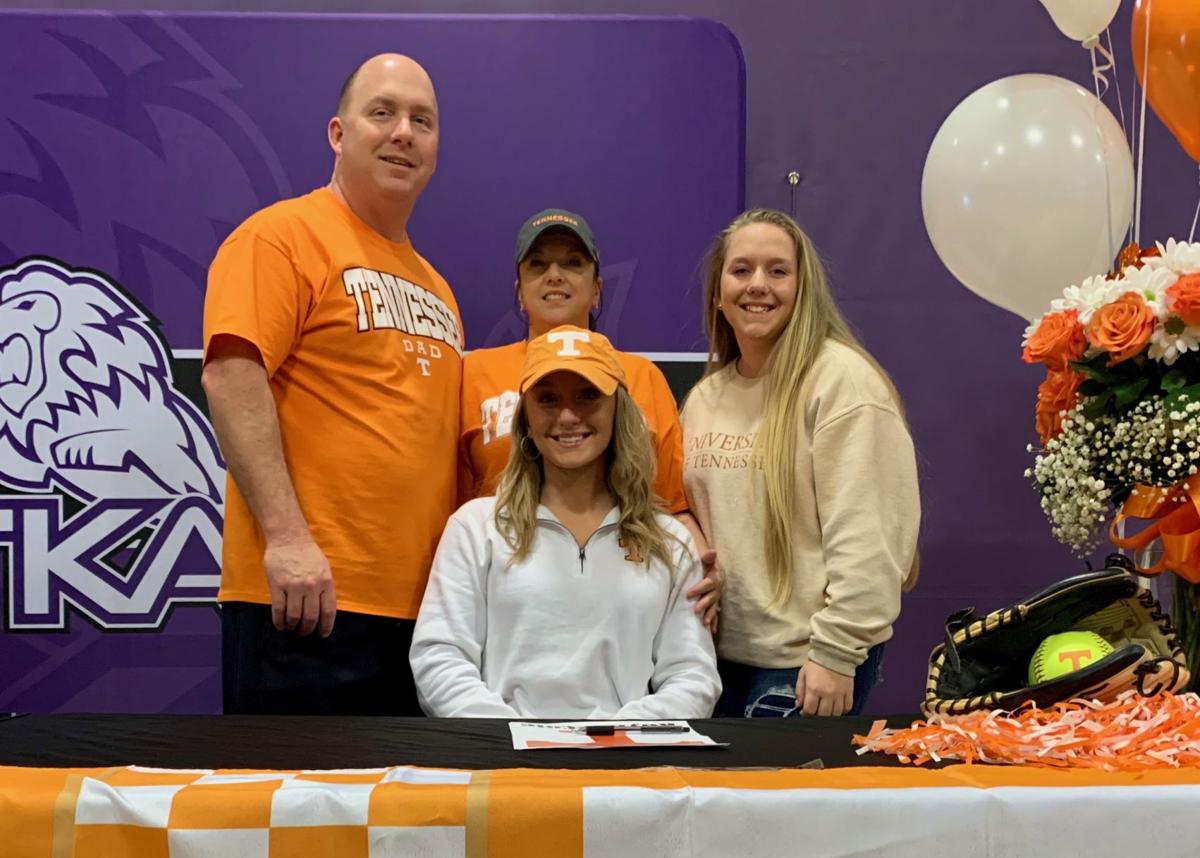 Newport’s Kaylan Cole (front-center) is joined by her family after signing her National Letter of Intent to play softball for the University of Tennessee on Friday. 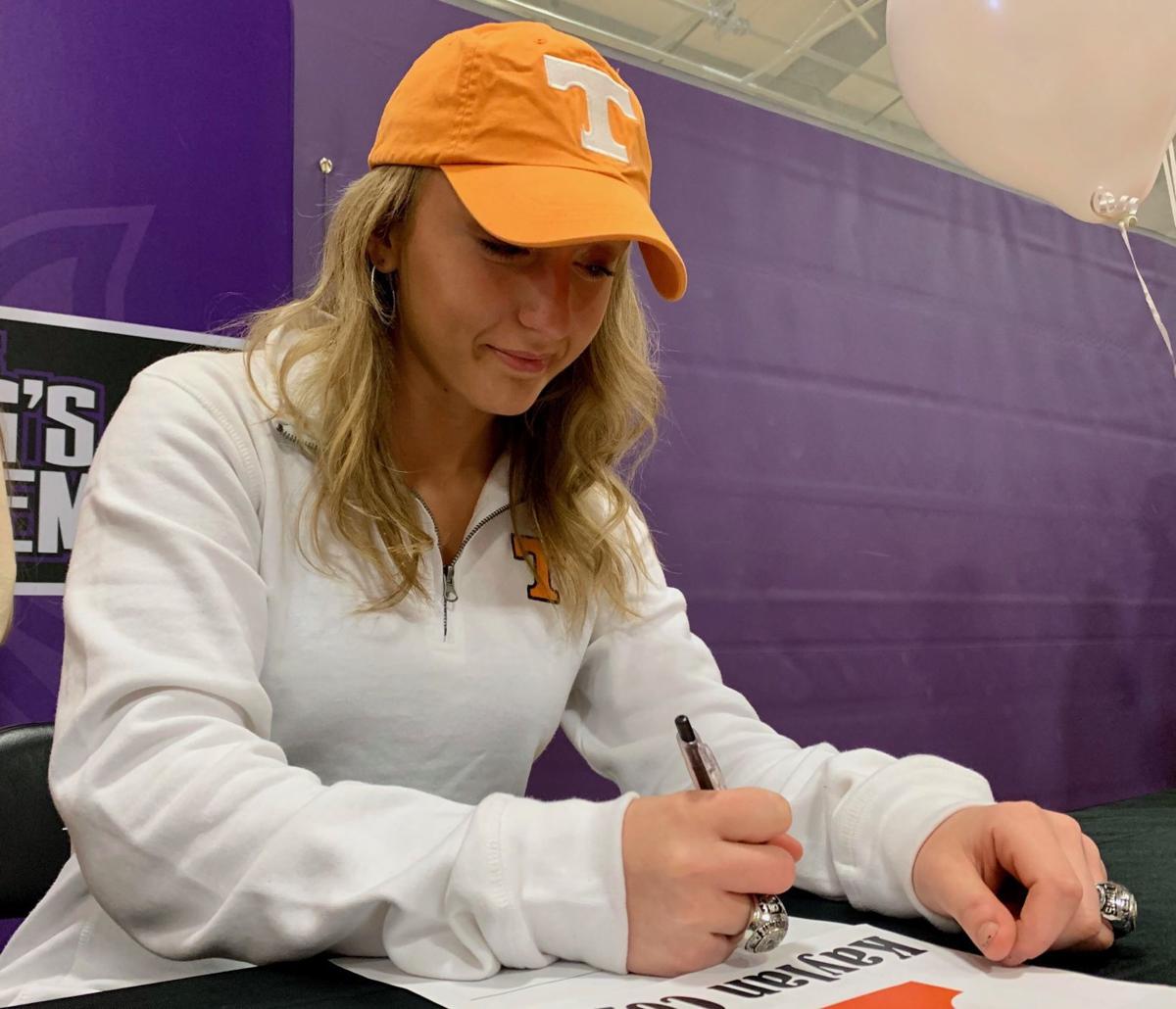 Newport’s Kaylan Cole signs her National Letter of Intent to play softball for the University of Tennessee on Friday.

Newport’s Kaylan Cole (front-center) is joined by her family after signing her National Letter of Intent to play softball for the University of Tennessee on Friday.

Newport’s Kaylan Cole signs her National Letter of Intent to play softball for the University of Tennessee on Friday.

SEYMOUR—This Valentine’s Day will be a hard one to top for Newport’s own Kaylan Cole.

On Friday the senior hurler made her engagement to her perfect match official, as she signed her National Letter of Intent to her dream school and program, the University of Tennessee.

Friday’s festivities were emotional for Cole, who’s dreamt of this day since she was a little girl. Now her future is official, and she’ll get to don that prestigious Lady Vol softball uniform she’s long awaited.

“It still doesn’t seem like it’s real,” Cole said. “It’s a dream. This all is really making my eyes open, but I don’t think it’ll feel completely real until I get to put that uniform on.”

Cole’s journey to this point in her career has been an eventful and prestigious one.

In her first three years with The King’s Academy she’s received All-State recognition all three seasons and been a part of two campaigns that have ended in Division II State Championship titles. She’s also been a part of USA Junior Olympic teams, which her team won this past summer.

All of her achievements haven’t come easy, though. Cole’s humble beginnings throughout her career have not only kept her motivated, but helped shape her into the athlete she is today.

“Coming from Cocke County, no one really gives you a chance,” Cole said. “Coming (to The King’s Academy), my first day here my accent was a big thing to everyone. Once I hit the field and showed what I could do, though, the jokes stopped. You have to prove yourself no matter what you want to do in life. If you don’t you’re never going to be successful.”

Over the years she’s worked long and hard to attain a goal that many thought couldn’t be achieved, and maybe rightfully so.

It’s already rare for athletes in the east Tennessee region to get a full athletic scholarship to any Division I school in the NCAA. Getting a full ride to a program in one of the more elite athletic conferences is an even bigger long shot.

Cole never wavered on her goals, though, which landed her in the chair every athlete wants to one day be in on Friday, making the proclamation that they all want to make, and signing the sweetest piece of paper she’ll ever leave her name on.

“I’ve always strived for this goal. Once I got the offer it was a relief,” Cole said. “I was doubted ever since I was little. It’s been a lot of hard work to get here, but it’s so worth it. I would just tell anyone chasing a dream like I did to never give up. Never stop chasing it.”

Before putting on that Pantone 151 orange uniform next season, Cole still has business to attend to at the high school level.

With her final year at TKA set to begin in less than a month, the senior is ready to take the reins of a program she’s enjoyed many successes with and continue on with everything its been able to achieve over the last few seasons.

“I have my eyes set on getting back to the state tournament one more time,” Cole said. “It’s going to be a challenge this year because we lost five seniors from last year’s team. It still doesn’t feel like I’m a senior and this is my final year here, but I intend to make the most of it and go out on top.”