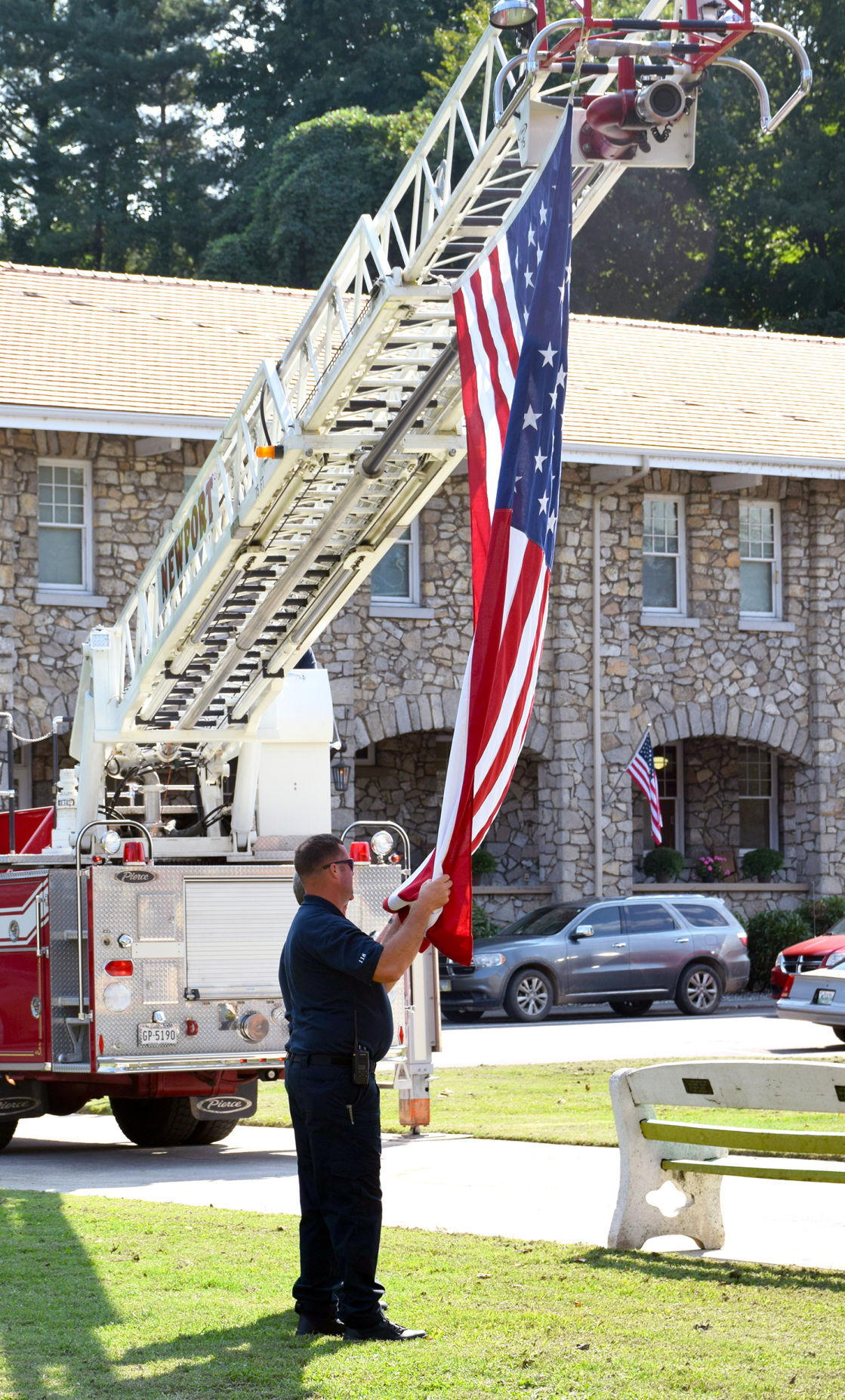 Members of the Newport Fire Department slowly unfurled the American Flag during the 9/11 ceremony as it was displayed from a ladder truck high above the courthouse lawn. 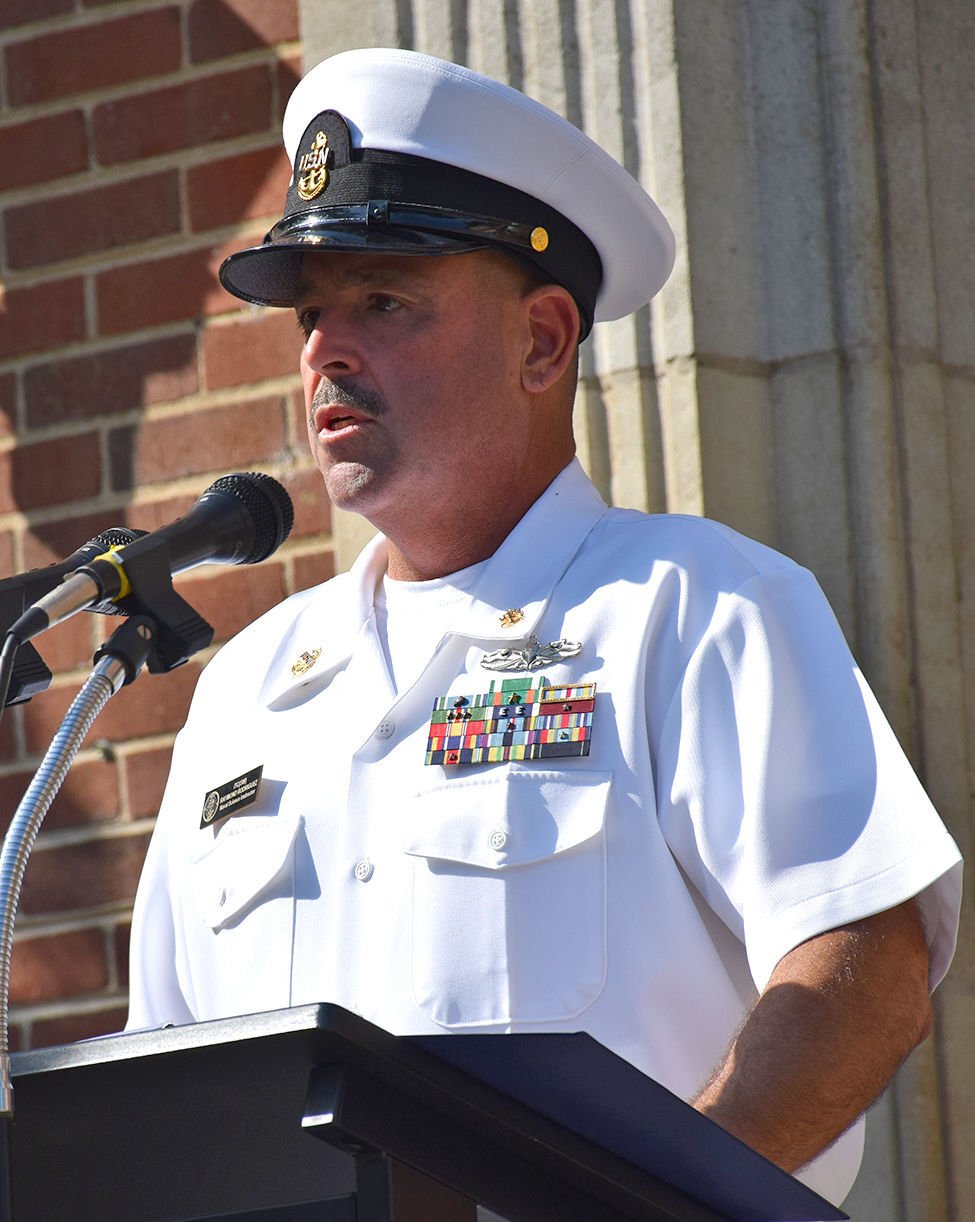 Chief Raymond Rodriquez, a U.S. Navy veteran, was the guest speaker for the 9/11 ceremony. Rodriquez thanked all of the first responders for their actions on that day, and for their continued work in communities across the country.

Members of the Newport Fire Department slowly unfurled the American Flag during the 9/11 ceremony as it was displayed from a ladder truck high above the courthouse lawn.

Chief Raymond Rodriquez, a U.S. Navy veteran, was the guest speaker for the 9/11 ceremony. Rodriquez thanked all of the first responders for their actions on that day, and for their continued work in communities across the country.

NEWPORT—The Cocke County Sheriff’s Office recently held a 9/11-remembrance ceremony to honor 20 years since the tragic events of that day.

Members of the Newport Fire Department participated in the event that honored all of the lives lost during the four coordinated terrorist attacks on our country.

Rodriquez described the events of that day that changed the lives of every American.

“On September 11, 2001 we had 2,977 victims who died, and among those victims we had 412 that were first responders. The attacks were the deadliest terrorist attacks on American soil in U.S. history,” Rodriquez said.

“The attacks against New York City and Washington, DC caused death and destruction, which triggered an effort to combat terrorism for many years to come. For all Americans, the phrase 9/11 will evoke a special meaning, a moment in history when the world as we knew it changed forever. It’s fitting that every year on September 11 Americans join together to honor the memory of those who died that day.”

Rodriquez said that Americans learned a significant amount about themselves that day when they faced the most extreme and unimaginable circumstances. Ordinary humans reacted with extraordinary heroism that has continued long after the attacks of that day.

“We saw ordinary people choose duty in the face of death as security guards in the World Trade Center continued to help individuals out even as the building was collapsing around them. We say loyalty to friends overwhelm all sense of danger as New York City firefighters searched tirelessly for their own.

“We saw ordinary people choose self-sacrifice for the good of strangers as passengers on the plane over Pennsylvania refused to allow the hijackers to succeed. Ordinary people chose to spend their final moments expressing their love to their family members through one last call.”

Rodriquez was on board a Naval ship in the middle of the Pacific Ocean when the attacks occurred. His job in the Navy involved communications and message traffic. His duty that morning was to inform the captain of the events that were taking place in New York City. Rodriquez called the moment one he will never forget.

“I see our first responders here among us today. You first responders were on the frontline when the attacks occurred 20 years ago. As we stand here now the United States is at war with the COVID-19 pandemic.

“Everyone knows that being a first responders isn’t an easy job. It’s the police officers, it’s the firefighters, and it’s the EMS workers who are fighting for our country right now. You are the ones putting your lives at risk everyday when you put your uniform on. So I salute you and thank you for what you do for us.”

Chief Deputy C.J. Ball spoke on behalf of the Sheriff’s Office and acted as emcee for the event. He personally thanked the military members and first responders for the work they do each day.

Ball spoke on the strong faith that was showed by all Americans as they moved forward from the tragic events of that day.

“My family and I had the pleasure of being able to visit ground zero and it was a very emotional experience. 9/11 is day that shall not be forgotten,” Ball said. “We will always remember this tragic attack on our country. With God and prayers we have moved forward and become stronger as one nation under God.”

Administrative Lieutenant Chris Barnes provided and opening and closing prayer for the ceremony.

He also spoke on the resiliency of the American people who rose to the challenge after the 9/11 attacks took place.

“There is a lot going on in our lives and lots of demands on our time,” Barnes said.

“All these things mark the story of our lives. I want to talk about those who had the next chapter of their lives written on 9/11. It’s honorable to take this time to reflect on their stories that were written in sacrifice.

“On that day we were attacked by evil and for 20 years since we have seen the next chapter written as one of resolve and resilience. Since our nations founding Americans have risen to meet the challenge. As George Bush said, for the United States there will be no forgetting 9/11. We will remember every rescuer who died in honor. We will remember every family that lives in grief. We will remember the fire, the ash and the last phone calls.”

Members of the Newport Fire Department proudly unfurled the American Flag during the ceremony and hung it high above the courthouse lawn from a ladder truck.