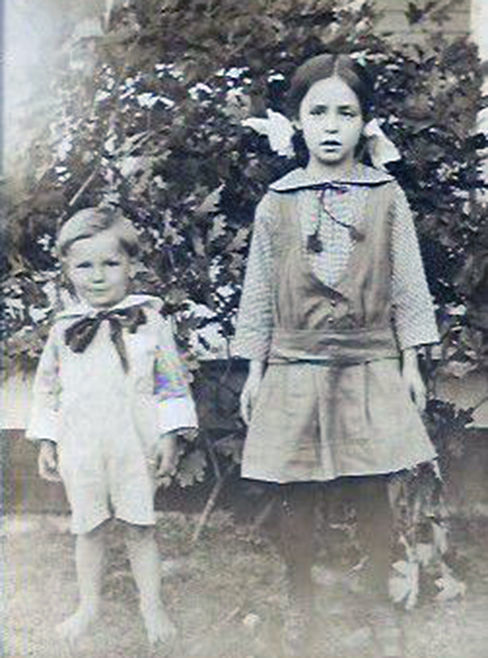 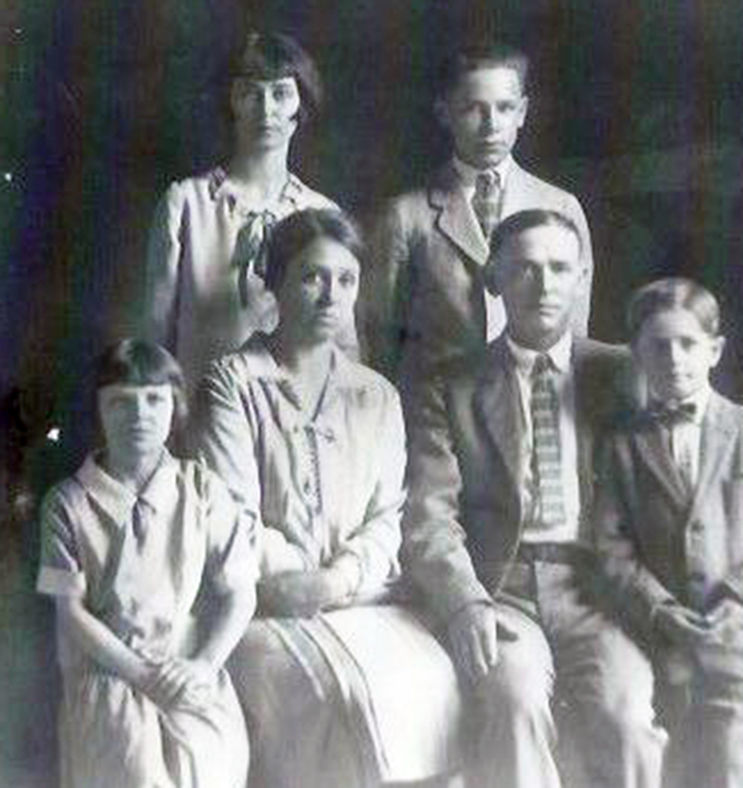 Daddy began his first job at Long Creek Elementary School, a two-room school three miles from the one he had attended. He earned $90.00 a month. Familiar with the school and students, he launched into his career with a vengeance—the way he attacked everything he attempted. Later, he returned to Rabbit Hill, where he felt right at home. Years later, he would recall stories about building fires in the pot-bellied stove, removing chickens that had been tossed into the openings of outdoor toilets, refereeing fights that he allowed to continue until children tired of fighting, encouraging and engaging in sports, and emphasizing the importance of learning. When a friend gave me a book that Daddy had once used, and inscribed, at Rabbit Hill, I was surprised to learn that he had taught about the great philosophers Plato and Aristotle. His expectations of students were high and remained so throughout his career. He believed people should do their best, finish school, and become contributing citizens—not leaches or thieves. He had no tolerance for laziness and theft.

While Daddy was engaged in his first year of teaching, Mother dropped out of college, obeying her father’s wishes. She wanted to return to college, but Granddaddy Hawk asked her to stay home and prepare to become Ted’s wife. Her family loved Daddy like a son and brother and decided that he was the one for her. After five years of dating, the couple wed in 1935 at the St. James parsonage. She was 19 and he was 23. (Their marriage lasted 54 years, ending when Mother died 14 years before Daddy.) They spent their honeymoon at Nigari Falls and Virginia, where they toured Natural Bridge. (Daddy always wanted to go to Hawaii but feared flying, which seemed strange to me, considering his lack of fear for anything else.) The newlyweds moved into the home of Daddy’s parents for six months, waiting for their home to be built. Those were times of adjustment for both of them. Daddy grew tobacco, bought and sold cattle, cut lumber, gathered stones from the mountain to build his house, and helped his parents, brother Fred and sister Nora with farming. (Madge had married P.G. Brooks a few years before and had her own land to farm and children to tend. When her first son John Troyce died at age ten, both Mother and Daddy were at the hospital. They and the whole family were devastated by the loss.) Mother, adjusting to a different way of life, where people worked around the clock, learned to love her new family and thought of her mother-in-law as another mother. They never once quarreled. (Nora married and moved to a farm in Virginia when I was about three. She started her own family, a brood of 5 children within 7 or 8 years. Daddy visited her frequently, and she came home often. Ever the loving daughter, she wrote her mother 10-page+ letters every week until Grandmother died at age 86.)

My sister, Sandy, was born in 1940, and I came along two years later. We grew up on a beautiful farm with loving parents. I’m not sure we truly appreciated then how fortunate we were to run in the woods, ride horses bareback, fish in the creeks, and play with our cousins Garry and Van Brooks, Mike, Ora Lee and James Winter, and friends from church and the community. Led by my adventuresome sister, Ora Lee, James and I once carved jack-o-lanterns from a tenant’s field pumpkins, let the air out of his tires, and hid in a culvert to watch his reactions—not nice. If our parents had known what we had done, we would have been spanked and forced to apologize. (Ora Lee and I still have a close relationship.) We went to church every Sunday and rode in an open truck to Bible school in the summer. Religion was an important part of our lives. Sometimes we caught chickens and sold them at Uncle Caul’s store to buy candy. Working in tobacco was a given, starting in the summer and ending at Christmas. Climbing in trees from which I could never get down, playing hide and seek, fishing for minnows in creeks, and spraying people with water hoses were some of our favorite pastimes. Life was good! Mother, who was extremely protective, wasn’t always aware of our adventures. On the other hand, Daddy, who was strict about some things, did not fear our stepping on snakes, being stung by bees, or falling and hurting ourselves. He expected us to shake off boo- boos the way he did. When he saw a snake, he stepped on its head and cut it off with his pocket knife, while Mother climbed on a chair in the house and screamed if she saw a snake through her house window. She was a coward and he was a warrior. (Passing his physical, deciding to become a sailor, and readying himself to join his brother and go to war, it ended; and he never saw combat. He would have been a fearsome soldier. A sharp shooter, he never hunted and told people who hunted in his woods never to shoot a dove because they were biblical creatures. He did, however, shoot predators who stalked his animals.

More cousins were born; and like the older ones, they loved their Uncle Ted—“the “fixer,” who could work magic with W-D 40, a piece of twine string and duct tape. If farm machinery, a car, a commode, or faucet were broken, he was the man to call. He usually successfully repaired broken things; but, unfortunately, he sometimes destroyed them. “They didn’t work anyway,” was his response. When Garry and Van lost their father, Daddy stepped in and taught the city boys how to vaccinate and herd cows and how to farm. To my cousins, especially Mike, Randy and Jeff, Uncle Ted was special—a second father, a wise man, a problem solver, and a prankster, who created much laughter. Daddy laughed his way through life. These nephews were amazed at their uncle’s ability to straighten the legs of a clubfooted calf by using boards and duct tape. Once, in an effort to save a cow whose leg was rotten with gangrene, he chopped off her leg with an ax, dipped the stub in turpentine and coal oil and wrapped it in cloths. (He had nerves of steel.) The cow lived and walked on three legs, a true miracle. Aunt Nora’s son David made annual trips to Tennessee, bringing with him a truckload of apples to share with family, especially his Uncle Ted, whom he always visited.

My memories of days when I was very young are hazy. I think Daddy continued to teach at one and two-room schools at Rabbit Hill and Long Creek until he was called to teach at Parrottsville High School in 1940 under Principal T.S. Ellison. Soon afterward, he was appointed as principal of both the elementary school and high school. Quite young for the responsibilities he faced, he said yes to even more duties. Having no secretary those first few years, he kept the school’s books, which included recording grades, supervised teachers, oversaw custodians, bus drivers, and cafeteria workers, coached both boys’ and girls’ basketball teams, directed class plays, chaperoned senior trips, and sometimes drove the school bus on basketball trips.

Few people knew that Daddy bought students their class rings, annuals, class pictures, clothes, and food when they had no money. He also paid for class trips, and he took students home from ballgames when they had no way home. He often fell into bed at 3:00 A. M. When one of his students lost two children in a fire, Daddy wrote him a letter. Years later, the man told me that Daddy’s letter brought him the comfort he needed and gave him hope. Daddy coached championship teams and many years later could repeat play-by-plays of most games. (His memory for baseball and basketball games and students’ names was truly amazing. I honestly think he never forgot a student he taught.) His favorite stories included players such as the Nease sisters (Frances, Pat, and Dorothy), Helen Peters, Kay Freshour, Charlotte Jones, Clyde Ottinger, Ransom Wiley, Melvin Ottinger, Dwaine Peters, and his own son-in-law Billy Harper. These are only a few of the students whom he proudly called his players. Daddy helped Melvin achieve success. Having outstanding grades and great basketball skills, Melvin had no plans to go to college. Knowing he could have a bright future, Daddy asked a coach at Shorter College in Rome, Georgia, to take a look at him and consider him for a scholarship, which he received. Growing homesick, he called his father and begged to come home. His wise father called Daddy who advised him not to go after his son. As Daddy had predicted, Melvin became a standout player, graduated from college, continued his studies, and became an award-winning coach, whose name appears on the name of a gymnasium. (Not often given to praise, Daddy once paid me a great compliment about my basketball skills. Thinking I was asleep, he told Mother I had played like Charlotte Jones at that night’s game.)

When I was too young to go to school, I would sometime tag along with Daddy, and he would lift me to the stage and let me sing for the students at chapel. One of the songs was “Pistol Packin’ Momma,” probably not an appropriate song for chapel. Another time I sang was at the Newport fair, which was held at the park. Because I was only 8, Mother, thinking I was too young, told me not to enter the talent show; but I ran away from her, heading to the stage with Daddy chasing me. Again, he placed me on a stage and listened as I sang “Goodnight, Irene.” He believed in me, and I won the talent show! I had inherited Daddy’s chance-taking. He liked to hear me sing and seemed proud of me when I sang “Hey, Hey, Good Lookin’”at Governor Clement’s political rally at the Newport Park. Daddy, too, sang as a member of the church choir, never realizing that he sang the same note over and over and not knowing that he was totally tone deaf. While he never told me that I had a nice voice, he urged my son to become a performer instead of a computer analyst because he loved his voice. Dax said a last goodbye to his Pepaw by singing “Amazing Grace” at his grave.