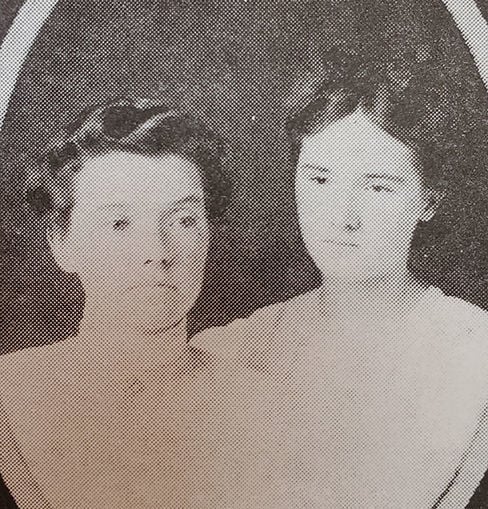 Sisters Dovie, left, and Rhoda Sisk, daughters of William and Lou (Hannon) Sisk, were among those felled by flu during the pandemic of 1918-1919. Dovie died in February of 1919 of the disease, and Rhoda slowly recovered. 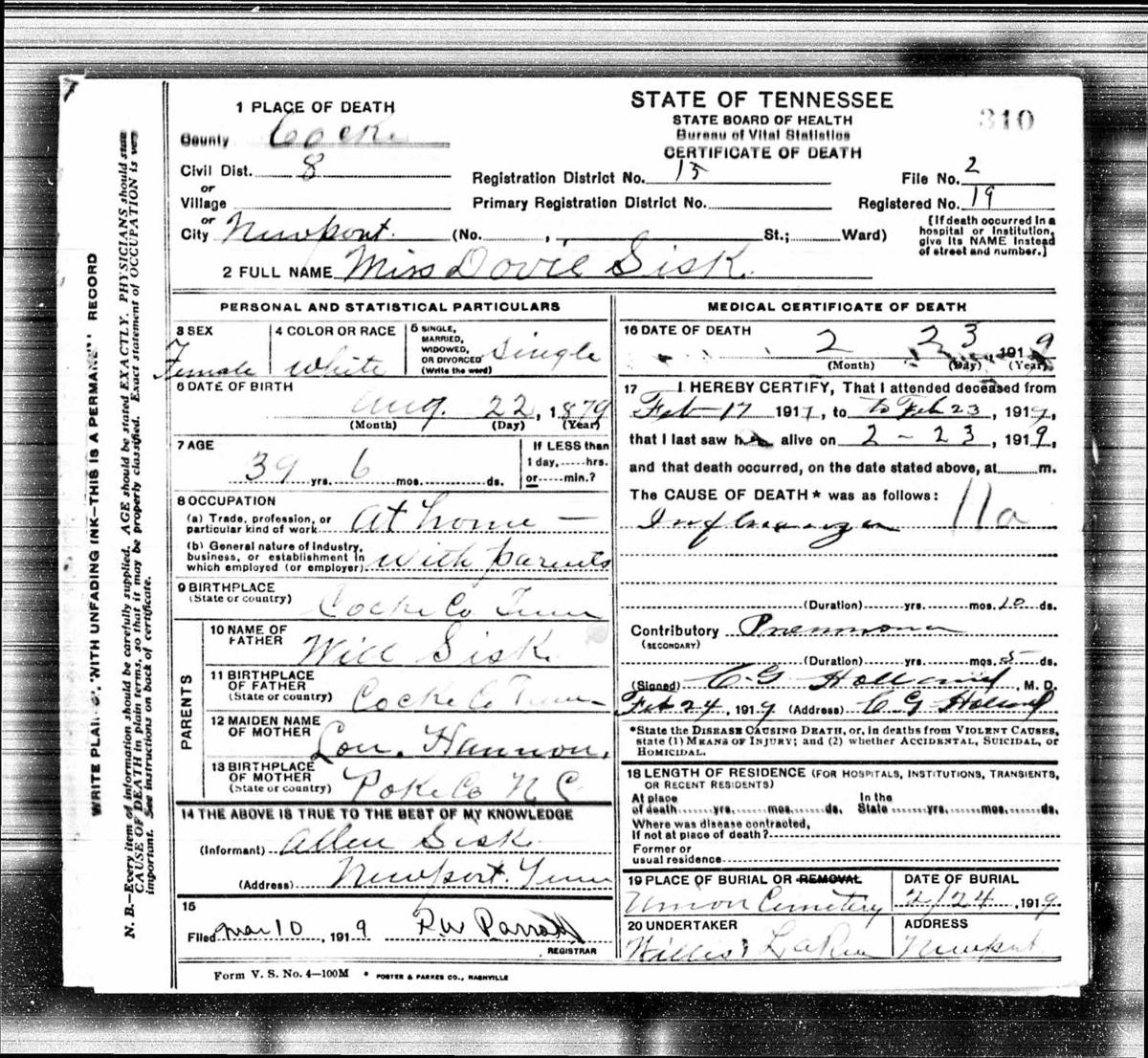 The death certificate of Dovie Sisk listed the cause of her death as “influenza.”

Sisters Dovie, left, and Rhoda Sisk, daughters of William and Lou (Hannon) Sisk, were among those felled by flu during the pandemic of 1918-1919. Dovie died in February of 1919 of the disease, and Rhoda slowly recovered.

The death certificate of Dovie Sisk listed the cause of her death as “influenza.”

EDITOR’S NOTE: This is the second and final column pertaining to the flu pandemic of 1918-1919 and its effects on Cocke County citizens. Much of the material for these columns was researched and shared by Cocke County Historian Edward R. Walker III.

On Nov. 24, 1918, the Knoxville Journal & Tribune reported on the latest round of cases and carried news of the death of a pretty little Newport girl.

Outbreak in Cocke County and

Newport May Result in

Newport, Tenn., Nov. 22—Influenza has again broken out dreadfully in Cocke county, and especially in Newport, where it is estimated that practically 100 cases have developed within the last five days. For the first time, great inroads have been made into the graded and high schools until it has become necessary to reconsider the matter of closing both indefinitely.

Little Dorothy, the 10-year-old daughter of Geo. F. Smith, chairman of their high school board, died last night with double pneumonia, resulting from an attack of influenza on last Thursday afternoon. Another 7-year-old daughter is reported late this afternoon to have pneumonia.

Several communities out in the rural districts are having new attacks of the disease. The public schools had just about regained running strength, following the former epidemic of three weeks ago, but now they are being shot to pieces again and several have been compelled to close. It is likely that all will be closed by the board at the close of next week, until after the holidays.

George F. Smith was one of Newport’s most prominent citizens. A pharmacist, he married Margaret Burnett of the Del Rio family, and they were the parents of quite a large family, Dorothy being one of the youngest. Mr. Smith, at one time, served as Newport’s mayor, and is said to have had one of the first automobiles in Cocke County.

Tragically and ironically, while the family grieved the loss of little Dorothy, their oldest son, Burnett Smith, serving in the medical corps in France, would be dead within a month, dying of pneumonia brought about by influenza. At the time the family was unaware of their beloved son and brothers’ condition.

The Knoxville newspaper wasn’t the only one reporting on the troubles here. On Nov. 29, 1918, the Greeneville Daily Sun picked up the following item from the Newport Plain Talk:

On account of a re-spread of influenza the city schools and the high school have closed until the first of January. The teachers were allowed full pay. The county school board was in session Wednesday and the county schools will probably be closed on Friday for the year and the money applied on next year’s schools. Pool rooms, shooting galleries, and moving picture shows have also been closed.

As November gave way to December and the holiday season neared, influenza’s grip on Newport and Cocke County continued. The Knoxville Journal & Tribune, on Dec. 3, 1918, updated readers with the following paragraph:

The influenza trouble in Newport and in many sections of the county is still giving a great deal of trouble. Daily reports of physicians indicate that there is as much or more of it now in Newport than at any date during the siege of the epidemic. The people have evidently learned to take precaution and great care in the treatment of cases, as no fatalities have occurred in the last ten days.

Christmas of 1918 came and went, celebrated, no doubt, in a subdued manner. With the arrival of 1919, the flu still raged, claiming more and more lives here in Cocke County and around the world.

October of 1918 seemed to be the worst month with 19 deaths recorded, followed by 17 more in November. Thankfully there was a significant drop in the number of fatalities in December when only 7 people are recorded as flu victims, followed by 5 in January. Perhaps the cold weather kept people “socially distanced” and “self-quarantined” during these weeks and prevented the spread of the contagion.

February of 1919 brought double the number with 10 deaths listed, including that of Miss Dovie Sisk, a cousin of ours. She was 39 years old and a daughter of William and Lou (Hannon) Sisk, one of several children. According to her great-great-nephew, Chris Edmonds, Dovie and her sister Rhoda (who became Chris’s great-grandmother), both came down with the flu. The family story is that Rhoda was the sicker of the two and wasn’t expected to live, while Dovie seemed to have a milder case. Ironically the reverse occurred, with Dovie’s sickness “going into pneumonia” and claiming her life. Rhoda gradually recovered and lived a long, long life, dying in the 1980s well past the age of 90.

In discussing his findings, Walker pointed out that he’s quite confident there were other deaths here from the flu during this time. Death certificates were quite a new thing in Tennessee, having begun only on Jan. 1, 1914, and record keeping was somewhat haphazard. Quite a few people of the era do not have death certificates. For those with death certificates, sometimes the cause of death is not listed.

Following is a list of Walker’s findings regarding Cocke County’s flu victims, giving their names and ages:

Slowly but surely, the pandemic ended and life continued with people going about their daily business without fear of contracting the disease. Schools reopened, businesses welcomed more customers, and the “Roaring 20s” swept into view. Church attendance increased again. Life was good.

And, eventually, life will be good for us once again.