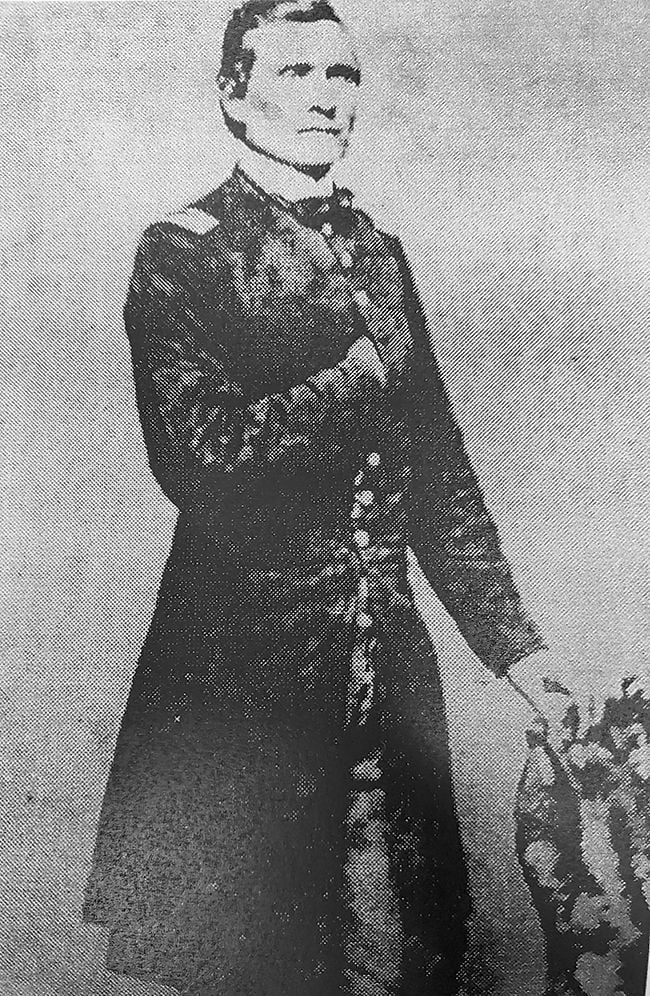 Captain Asbury Fowler’s photo from the Civil War shows a distinguished looking fellow. The photo was taken by J. Noel with J.B. VanStostorens Gem Gallery in Columbia, TN and was sold at auction in Knoxville several years ago. 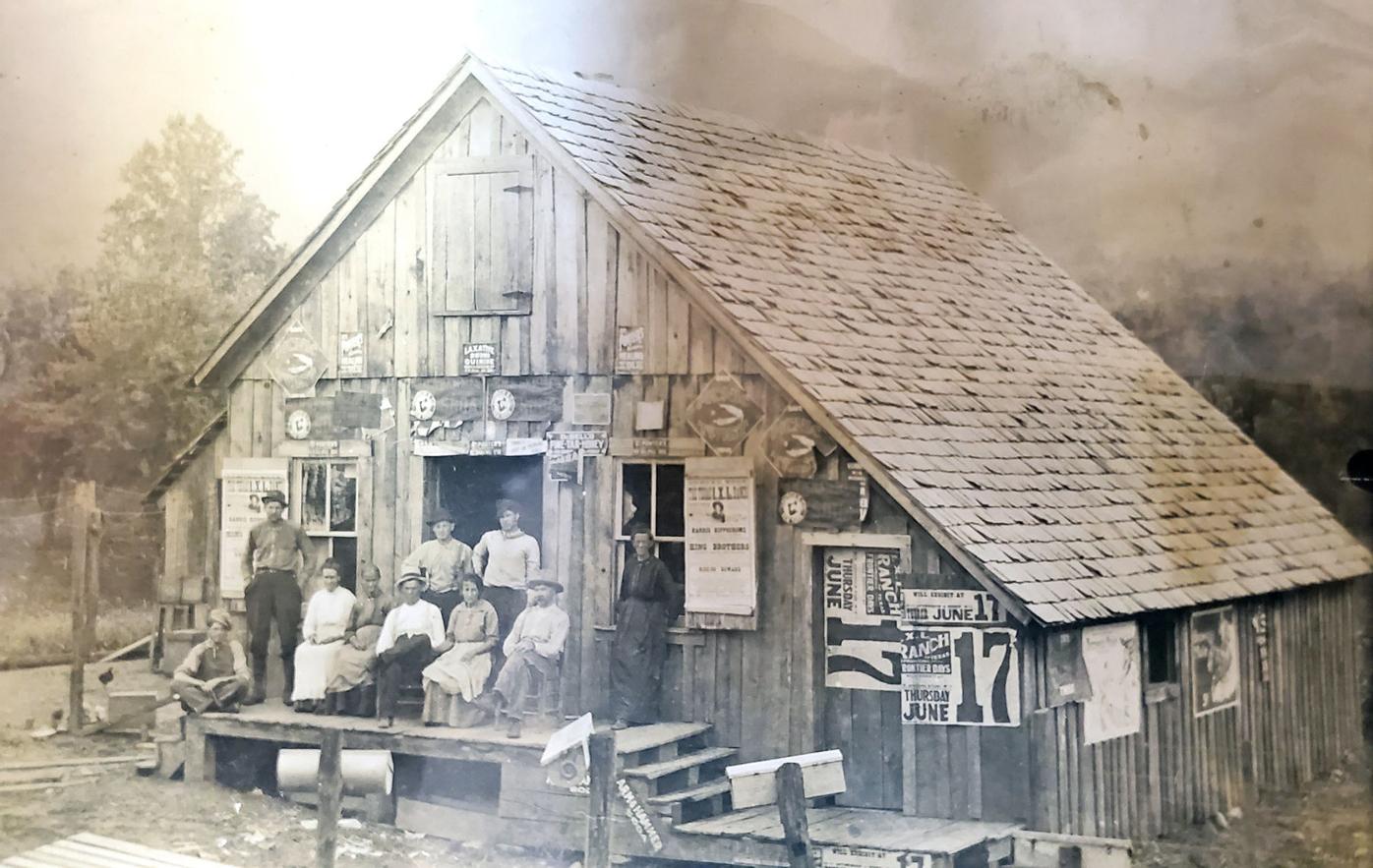 This photo of Asbury Fowler’s store was taken ca. 1906-1920. Easter Williams is the lady standing in the black dress. At far right are Lem and Celia Fowler, son and daughter-in-law of Asbury. Also pictured are Elijah ‘Lige’ Fowler, a son; Drewery and Eldora “Dorie” (Garver) Jenkins, Dan and Maude (Canupp) Fowler (grandson of Asbury) and Lige’s sons Joe and John Fowler.

Captain Asbury Fowler’s photo from the Civil War shows a distinguished looking fellow. The photo was taken by J. Noel with J.B. VanStostorens Gem Gallery in Columbia, TN and was sold at auction in Knoxville several years ago.

This photo of Asbury Fowler’s store was taken ca. 1906-1920. Easter Williams is the lady standing in the black dress. At far right are Lem and Celia Fowler, son and daughter-in-law of Asbury. Also pictured are Elijah ‘Lige’ Fowler, a son; Drewery and Eldora “Dorie” (Garver) Jenkins, Dan and Maude (Canupp) Fowler (grandson of Asbury) and Lige’s sons Joe and John Fowler.

In February of 1906, a local newspaper carried the following announcement:

Asbury Fowler, a well-known citizen of Cosby, died last week after a long illness. He was about 75 years old, and in his younger manhood he was very prominent in political affairs. He served the county for a number of years as magistrate from the old 12th district.

Such a short statement for such an excellent citizen.

With the help of Shane McGaha and Chris Edmonds, quite a bit of information has surfaced about this interesting fellow. Shane, especially, is very knowledgeable about the Cosby community and its early citizens.

Asbury Fowler was born in South Carolina, a son of Lemuel and Elizabeth Fowler. The year of his birth is given as 1832 in the 1850 Cocke County, TN census and as 1827 in the 1860 census. Such variations of age are not uncommon in early records.

Apparently Lemuel (1805-1884) and Elizabeth Fowler separated, for by 1840, he and his second wife, the former Eliza Wilabouroughy, were living in Union County, SC.

In 1860, the family is recorded in the Taylorsburg area, which we know today as Edwina. At the time it was District 8. Asbury, now age 33, is married to Elizabeth, 26; with children Elendor, 7; Elizabeth 2; and Martha, 3 months. Living with the family is his brother-in-law John Holder, 22, with Nancy, 2 months.

Another Fowler household was recorded in District 11 in Cocke County in 1860, headed by an Elijah Fowler, age 65, born in South Carolina, with wife Elizabeth, age 60, and the following children: Jenny, 22; Coleman, 18; John, 16; and Mack, 12. This is the only time they appear. Apparently they were related to Asbury, but exactly how remains unclear.

When Civil War broke out, Asbury sided with the Union, serving in the 8th Tennessee Cavalry, where he rose to the rank of Captain.

Attached to his war record is the following letter penned by Fowler to his commander. His handwriting and grammar are excellent, showing that he came from an educated background.

I have the honor herewith to tender you My Resignation as Captain, Company K., in the 8th Regiment of Tennessee Cavalry Volunteers on account of the Consolidation of the 8th and 10th Tenn. Cavalry Volunteers. Said Consolidation was made in my absence and also very unsatisfactory to my feelings. 2nd. I having a family residing in Cocke County, East Tenn, where it is impossible for them much longer to exist without my assistance and feeling it my duty to move them, if possible, to Some point where Supplies can be obtained.

I Certify on honor that I am not indebted to the United States except what I am prepared to turn over to the proper officers on the acceptance of my Resignation. I was last Paid by Major Trousdale to include the 29th day of February 1864.

Whether or not Fowler was allowed to leave service remains unclear. In later years, he became a member of Post 71, Newport, Cocke County’s G.A.R. (General Army of the Republic), an organization for Federal soldiers from the Civil War. Its records state he was “discharged by Genl. Order” but does not give the date. He was “Mustered into” the G.A.R. on 3 April 1888.

An interesting side note concerns Asbury’s brother Elijah Fowler, who served in the same military outfit as did Asbury, but in a different company, his commanded by the famed Robert Ragan. Elijah is described as being 5 feet, 10 inches tall, with a fair complexion, blue eyes, and light hair. Prior to the war, Elijah had been a farmer.

At some point, Elijah was charged with desertion, but later was exonerated, according to the following notation in his military record:

“Charge of desertion removed. Was given recruiting Authority by the Capt. Of his Regiment. Sept. 14, 1863 and while so about on such recruiting service was killed on or about Dec. 7, 1863 by a Rebel Soldier whom he was endeavoring to Capture. Signed C. Hammond.”

Of further interest is the fact that records show a military monument for Elijah was “delivered to Cosby” but thus far, his grave has not been located.

Asbury Fowler married Louisa Elizabeth Holder (1835-1923). They were the parents of nine children:

At some point, he became operator of the store pictured with today’s article. He also was elected as a Magistrate, serving on the Cocke County Quarterly Court.

The late M.G. Roberts, who penned the column “Sass from Sassafras” for many years, once wrote about Cosby’s “Teachers, Leaders” and about Asbury Fowler said

Capt. Asbury Fowler was a picturesque person of this date. He was a member of the County Court for 30 years. A noted orator, he was in much demand as a public speaker. It is said that the orator of the old fashion school of oratory could hold his audience spell bound.

On a decoration day program in his old age, he was called upon to speak. The voice which had thrilled and encouraged the growth of this section of the county wasn’t strong enough to speak. So with his venerable head of white hair uncovered, he stood with tears coursing down his cheeks.

For a time, the Plain Talk published “Costner News”, penned by Ferman Maddron under the name Old Beeswax. More often than not, the Fowler family was mentioned. On July 23, 1908, Maddron reported the following news:

...A large crowd gathered at Fowler’s store Saturday, and tanked up on corn whiskey and blackberry juice. They soon developed into Solomans and Sampsons. Several guns and knives were brought into play, and for a time things looked squally, but no serious damage was done. Sunday Harry Holt and Will Sutton had a fight, in which Sutton was seriously cut in the back. Deputy Gunter arrested Al Baxter yesterday. Al belongs to a good family, but that won’t keep him out of trouble. Dave Sutton was arrested a few days ago for catching fish that had been put in the creek by the government. He was found guilty and fined. Better let the fish alone, boys, as we mean to protect them…

The Fowler property was extensive, covering the area from today’s Ledford Road across the highway and to the Park. Here lived Asbury and Elizabeth surrounded by many neighbors who were more than likely relatives.

Asbury died Feb. 15, 1906 and was buried in the Fowler Cemetery, which lies partly in Cocke and partly in Sevier County. Elizabeth (Holder) Fowler lived until 1921. In 1920, she is found in the household of her grandson Daniel Asbury and Maude (Cannup) Fowler and their family. At her death, she was buried on top of Asbury and later a separate marker was placed beside the grave for her.

On Oct. 2, 1928, the government purchased 5.1 acres in Cocke County and 16.2 acres in Sevier County from Dan and Maude Fowler for the Great Smoky Mountains National Park, in District 9. The property was described as “half-cultivated; balance in various timber; 120 apples trees; dirt road; some wire fencing; 3-room boxed house; 1 barn; purchased by committed for $650.00; deed and check mailed Nov. 24, 1928; deed recorded and returned 12/4/28; deed delivered to state 1/4/29. Released to federal government 2/6/30.”

Shane McGaha thinks this is where Asbury and Elizabeth lived, perhaps in the same house.

Asbury and Elizabeth, like many couples of the day, left their mark in a positive manner, one which deserved a lengthier summation than that accorded Asbury at his death.