The letterhead for Lady Ruth O’Dell’s stationary included mention of her memberships in various societies. “Iris Dell” was the name of her modest home which stood just above Edgemont Elementary School. 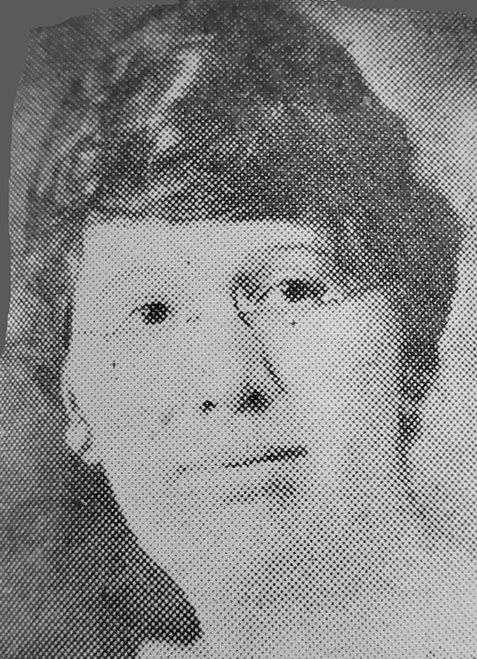 Lady Ruth Webb O’Dell (1886-1956) left her mark on Cocke County in many ways. A longtime teacher, she was the county’s first female Superintendent of Schools, served in the Tennessee General Assembly, and authored Over the Misty Blue Hills: The Story of Cocke County, Tennessee.

The letterhead for Lady Ruth O’Dell’s stationary included mention of her memberships in various societies. “Iris Dell” was the name of her modest home which stood just above Edgemont Elementary School.

Lady Ruth Webb O’Dell (1886-1956) left her mark on Cocke County in many ways. A longtime teacher, she was the county’s first female Superintendent of Schools, served in the Tennessee General Assembly, and authored Over the Misty Blue Hills: The Story of Cocke County, Tennessee.

The Number One textbook for students of Cocke County history has long been Over the Misty Blue Hills.

Published in 1950, it was researched and written by Lady Ruth Webb O’Dell, one of our most interesting citizens.

She was born in Sevier County, TN, oldest of four children of George Washington Webb and his wife, the former Sarah Kansas McAndrew. The Webb family moved to Newport in 1892 when the future author/historian/teacher/politician was six years old.

Her unique personality manifested itself early. She taught her first school when she was only 13 years old. At the time, those seeking a teaching position simply took the “teachers’ test” and, if they received a passing grade, qualified to teach. Apparently there were neither educational nor age requirements.

Teaching was her primary vocation. For several years, she taught at Newport Grammar School, but from 1920-1923, she served as Cocke County’s first female Superintendent of Schools. She would have only been 34 years old at the time, herself the mother of two young children.

From newspaper accounts of the era and local lore, Lady Ruth knew how to and wasn’t afraid to play political hard ball. She was the first woman to serve as president of the East Tennessee Education Association.

From 1937-1941, she served two terms in the Tennessee General Assembly, and while there, was awarded the honorary title, “Lady Ruth,” which she proudly carried to her dying day.

Over the years, she became absorbed in researching Cocke County’s history. She was fortunate in that several people, including Cora Massey Mims, John Jones, and Edmund Burnett, were still living, citizens whose memories stretched back farther than hers and who had interviewed even older folks.

Lady Ruth’s work culminated in the 1950 publication. My father treasured his autographed copy and often told of Lady Ruth’s difficulty in funding the work. He always mentioned the fact that Mrs. Cora Rorex purchased the first copy for a sum of $5.

The book quickly sold out and for many years new researchers paid well over $100 per copy if one came on the market. In more recent years, it has been republished with copies going for $40.

The following letter was found tucked in a copy of the book owned by Eleanor Susong Little Hickey. Dated Aug. 5, 1950, it was written to Mrs. Hickey’s sister, Mary Susong Taylor, who had sent her money for two copies. The language is as flamboyant as Lady Ruth, but the contents tell us how much Lady Ruth loved Cocke County and how important this project was to her.

Thank you so much for the check for 2 Books. You will just love the real name. I’ve not told anyone yet, but I’ll tell you so you can tell me if you think it has a sort of poetic ring--

“Over the Misty Blue Hills” — The Story of Cocke County, Tennessee.

That is such a wonderful theme in itself of how our early settlers did surmount the blue mtns. to get to our fertile valleys and people are still doing so to the tun[e] of 1 ½ M per yr – just to “view the landscape o’er.” Then travel back over them.

You’d wonder if you knew how I’ve had the courage to keep on keeping on with this val[iant] piece of work—incomplete and unfinished as it is—yet it’s better than no record at all and upon it can be built other history that probably can be accurate if taken from the records. All I have is authentic—almost all fact & little fancy. I first wrote it story form—the Hist. Com. made me do it all over and put in only mere dry facts—said they’d publish it. But they refused because those who insisted on my doing it were all dead by the time I got it re-written, hence the long delay. If I can swing the pub at all I’ll put what I left out in a second vol., but I’ll likely have passed on before people will ever appreciate much the value of such a book. Would you believe it?

I told you that only you and Mrs. Rorex have sent checks. Do not tell it—for I can’t bear to think that people are so thoughtless. They’ll all want 1-2-3-4-5 copies but it seems they want the books first. I may have to get someone who has a heart to advance the rest of the cash. I don’t know what else to do.

One man sent me $200 to help finish it out. So maybe I’ll be able to pay for it when it’s ready which will be 45 days from the date I tell the co[mpany] to start setting the type. I feel I can’t afford to say “Start—ready—go” until I have enough cash to pay the last cent on it. That’s why I asked for those who wanted copies to let me know.

It does look like some club would just love to sponsor the rest of the expense. I have enough for 2/3 of it, but I can’t get it out of pub house until it’s all paid—as everyone knows.

Drive out some day and see my pretty “Adamless Eden.” I get such joy from my quiet retreat, but in summer it certainly works me to death to even halfway keep it. Weeds and grass grow so rapidly these rainy summer days.

I hope that you are well and happy and that all is well with those who are near and dear to you.

Do please accept my very sincere thanks for the check and if you’ll tell others that if they want a copy I have to know at once or there will be none for them. Do not put any limit on the time I have to have the cash—just say at once. Of course, I’ll have a few extras printed, but only a few.

P.S. Excuse the smudge on your name. I’m out in the yard keeping a boy working. My black Persian cat jumped up on the chair holding ink and envelopes and his feet were wet with dew. It’s the last stamp I have or I’d fix a fresh one. Everything is “trouble,” isn’t it—even cats. But I love Persian cats. RWO

Her first husband was George W. O’Dell, a member of one of Cocke County’s earliest families. They had three children: George, who died at birth; Iris Ruth, and Lynn Sheeley. Mr. O’Dell died in 1944, and a few years later, Lady Ruth married W. Alexander Dysart. She died suddenly at her home in Carson Springs in 1956.

Sadly “what [she had] left” was never published.