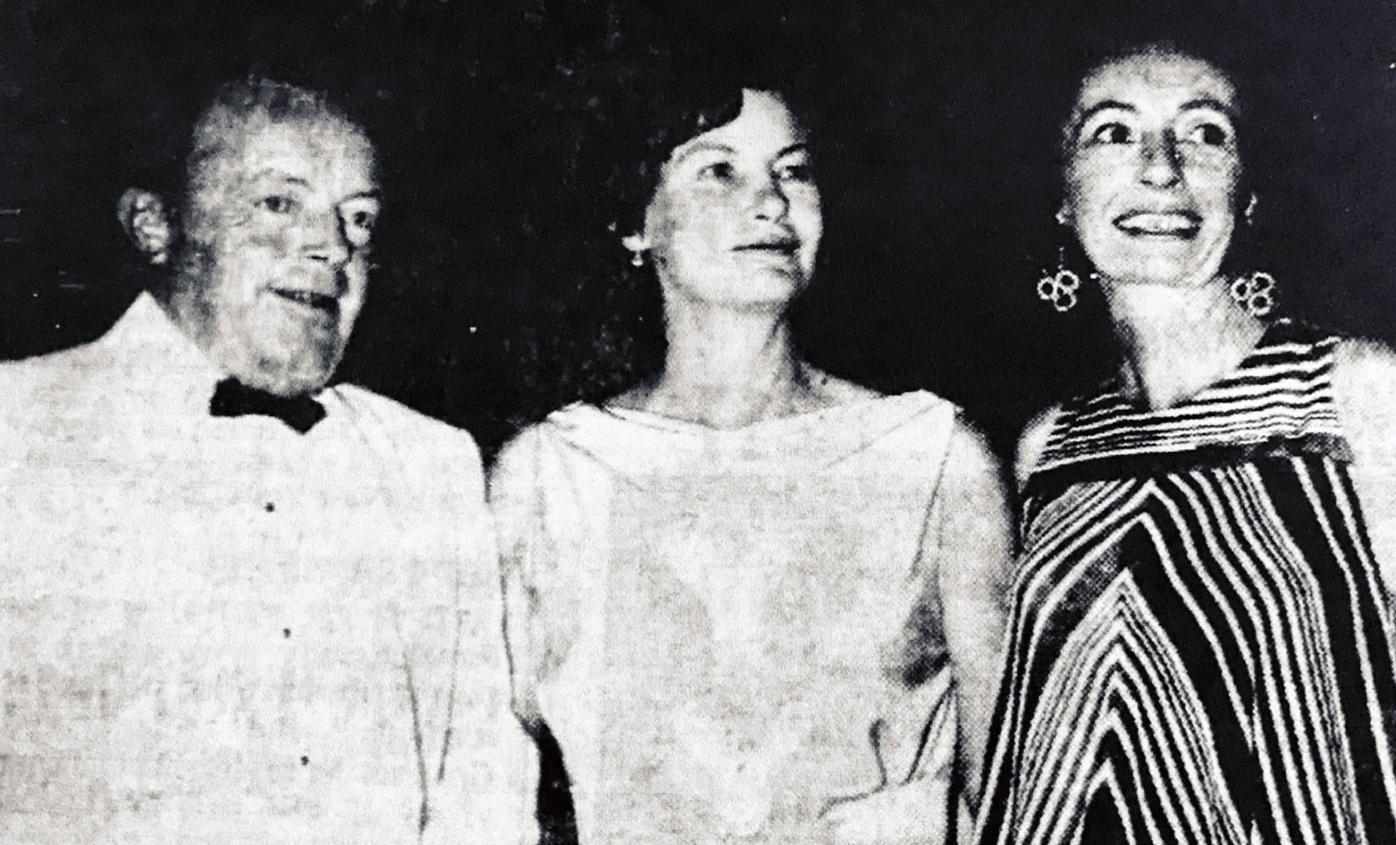 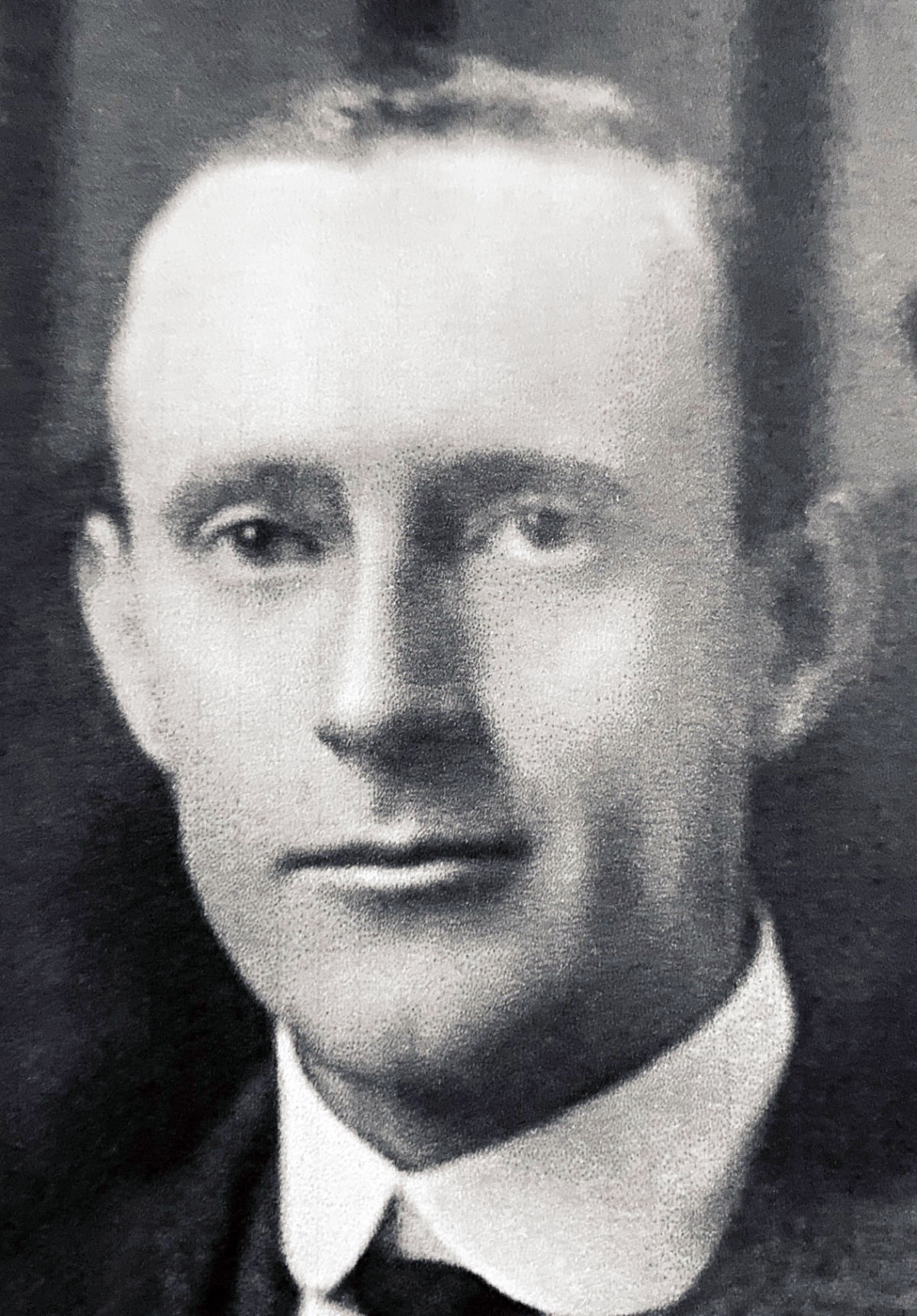 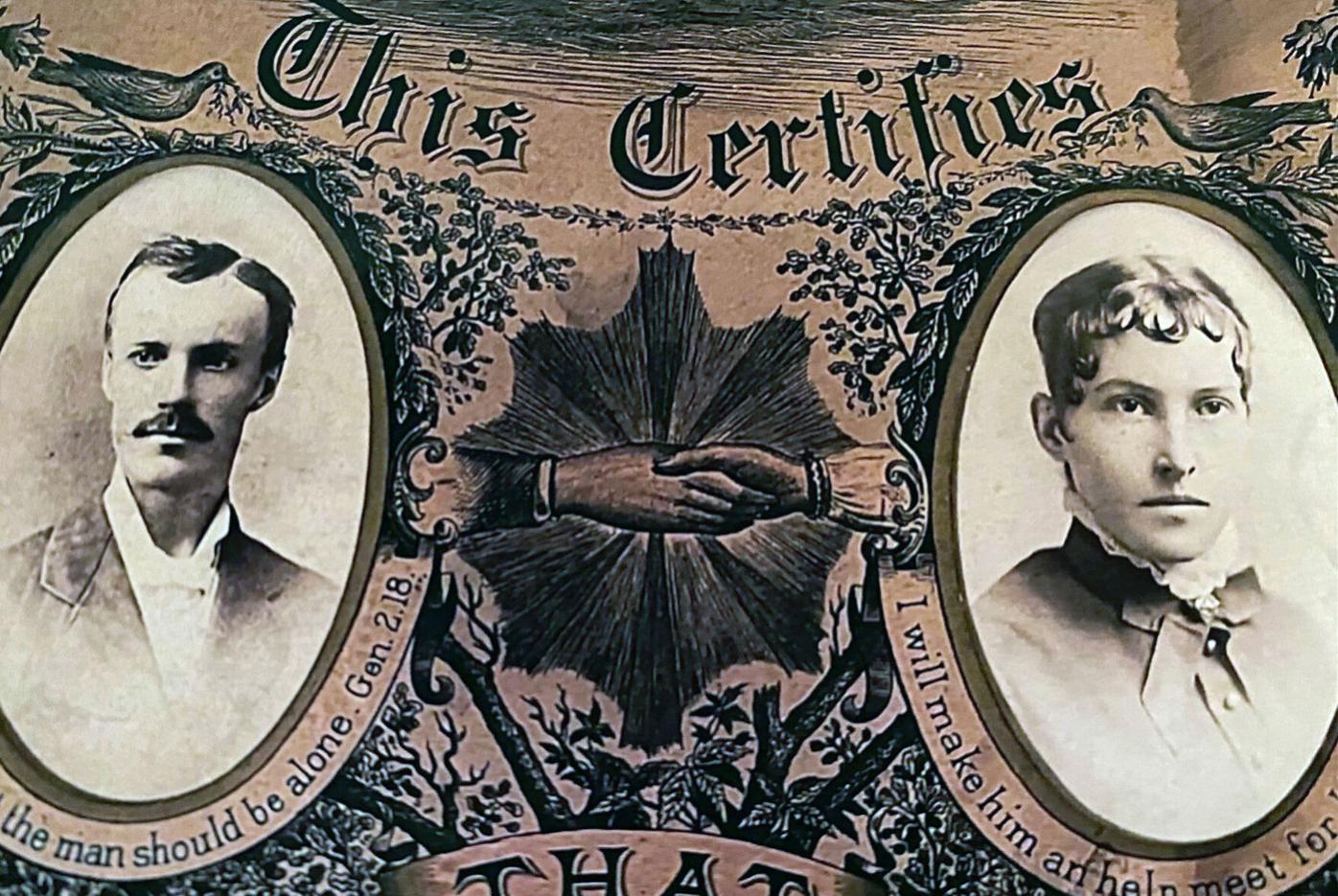 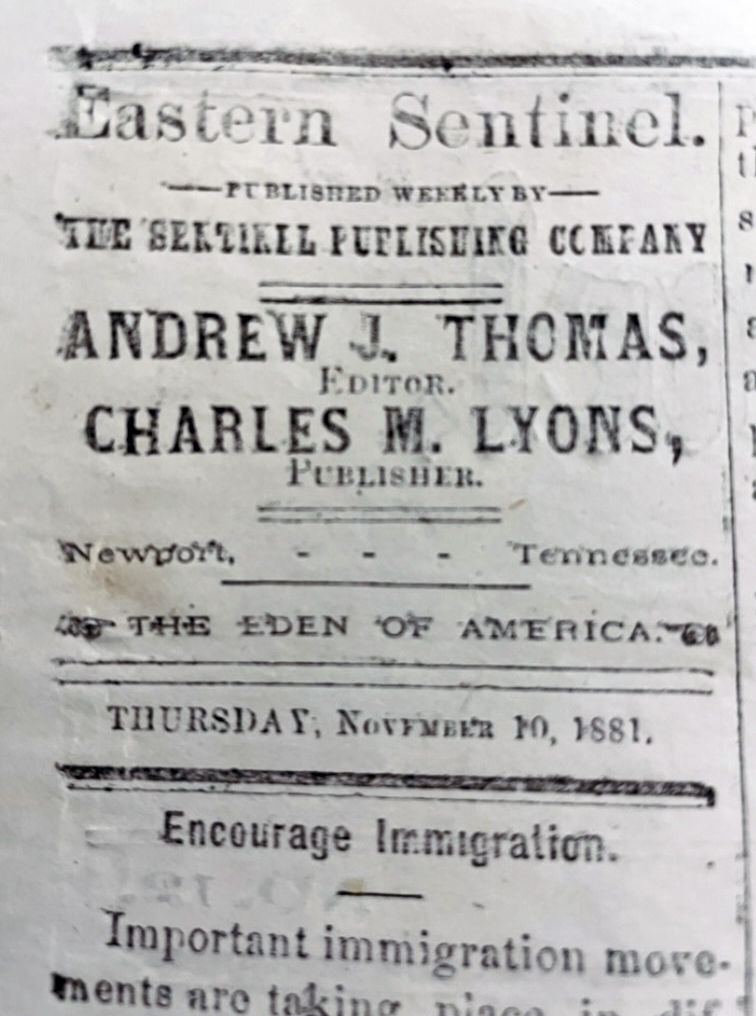 Last year, this column featured some history of previous Cocke County newspapers. One of the early editors was Andrew J. Thomas, who established the Eastern Sentinel, Cocke County’s second newspaper, in 1878. Recently more information on Mr. Thomas, as well as his picture, has surfaced.

Mr. Thomas was born in Cocke County in Oldtown on what is now Rock Hill Road. His parents were James M. and Phoebe (Sisk) Thomas. He was named for Andrew Johnson, the Greeneville tailor who had ended his tenure as Tennessee’s 15th governor just days before Andrew Johnson Thomas was born.

His ancestral roots had been embedded in Cocke County since the early 1800’s. His grandfather, George Thomas, was a soldier in the War of 1812. His maternal grandfather, Toliver Sisk, was longtime clerk of the Big Pigeon Baptist Church, the county’s oldest church.

When Andy Thomas was just twenty years old, he and J. Fred Talley formed a stock company to establish the Eastern Sentinel to be a Democrat mouthpiece in Cocke County. In that time journalism was primarily devoted to politics and commerce.

The first issue appeared September 18, 1878, with Thomas and Talley as editors. In January 1879 Talley left the partnership. In September 1880, J.L. Bible sold the Newport Reporter to Mr. Thomas, who combined it with the Eastern Sentinel. Mr. Thomas later sold his paper to Thomas L. Carty in October 1883.

After a visit, the Morristown Gazette wrote that Mr. Thomas “enlivened our sanctum with his genial spirits and entertaining manners.”

Mr. Thomas was married on August 24, 1882, at the old Pisgah Presbyterian Church to Miss Annie Louise Smith. Her father, the Rev. David F. Smith, was the pastor of the church as well as the professor at the Newport Academy, which was conducted at the Masonic Hall.

An account of the wedding appearing in the Knoxville Daily Tribune, August 26th stated that “The church was filled with friends and acquaintances of the contracting parties.” The bride’s father officiated, assisted by the Rev. J.R. Walker, the minister of the ME Church, South.

About 1947 Cora Massey Mims wrote these memories: A.J. Thomas was the editor of the Eastern Sentinel, established about 1878…Andy Thomas had a class of eight young girls in the Sunday school we had at the old Presbyterian church. I was one of them, and we were all in a flutter when we learned our teacher was to be married to Annie Smith, daughter of the pastor and the principal of our school. It was a church wedding, the first I ever attended, and later at the reception in the Eastport home, for the first time in my life, I tasted ice cream. It was made in a lard can, whirled around by hand in a tub of salt and ice.

By March 1884, it was announced that Mr. Thomas would be associated with Knaffl and Locke, a large wholesale and retail grocery concern in Knoxville. Apparently, there was still the draw of printers ink for in June 1884 he was listed as being with the Knoxville Tribune.

In June 1885 the paper announced that Thomas would be leaving for Florida for his health but the next month announced that he had resigned to take a clerkship in the Pension Office, but by November 1885, he was back as traveling agent and collector for the Tribune.

Thomas was suffering from tuberculosis, which in his day for his profession was an occupational hazard. A US Department of Labor Bulletin in 1916 entitled “Hygiene of the Printing Trades” stated “…American printers suffer far more from tuberculosis than occupied males in general.”

Sometime in 1886 he went to San Francisco in the interest of his health, but Mr. Smith’s case of TB could not be arrested and he came back to Cocke County where he died. His obituary gave an excellent account of his life and was on the front page of the Knoxville Tribune, February 15, 1887:

Andrew J. Thomas was born near Newport, Cocke county, Tennessee, November 18, 1857, and died at his father’s home in the same county February 6, 1887.

The deceased was well known in Knoxville and all over East Tennessee, having been employed a long time by THE TRIBUNE as traveling solicitor, then on the local staff and later as traveling correspondent.

In his boyhood Andrew was studious, industrious and persevering, early displaying traits of mind and will quite uncommon in the youth of his own age. His aspirations were high and he took advantage of every opportunity offered for self-improvement. He attended the schools in his own county as long as his father was able to give him tuition. He then spent some time at the University of Tennessee at Knoxville where he worked his own way. He was a close student and made a splendid record. He never undertook anything he did not thoroughly master. At the age of 18 he stood the examination for a cadetship at West Point. He carried off the honors at the examination, but being a strong Democrat the Congressman from his district, a Republican, objected to him and Mr. Thomas did not matriculate as a cadet at the West Point Military Academy. The young man had his heart set upon a course at this school and his failure to secure admission was a sore disappointment to him. But for the mean partisanship of a Republican Congressman he would have had a brilliant career at west point and the healthful effect of the military training might have prolonged his life to old age.

After his disappointment Mr. Thomas returned to his native county and was for several years editor of the NEWPORT SENTINEL which was one of the brightest and best newspapers in the State while he conducted it. While he was editor of the Sentinel, Mr. Thomas married Miss Annie Smith, daughter of Rev. D.F. Smith of Newport.

Close confinement to newspaper work began to tell on Mr. Thomas’ health and he resolved to quit the editorial room for active outdoor life. He sold out the Sentinel and secured a position as traveling solicitor of the KNOXVILLE TRIBUNE, His work was eminently satisfactory and he made warm personal friends wherever he went. He was the most successful solicitor ever employed by THE TRIBUNE. After traveling awhile he began to regain his health and at his request was advanced to position on the local staff of the paper. Here he did excellent work. He was one of the most energetic newspaper men we have ever known. No employee of THE TRIBUNE has ever manifested so deep an interest in the success of the paper. When Hon. R.L. Taylor became Pension Agent at Knoxville, Mr. Thomas secured a clerkship in in the office. But he could not stand the confinement. After a brief period of rest he again obtained a position with THE TRIBUNE’s traveling correspondent. He visited the leading towns of East Tennessee writing interesting letters. Some of his best newspaper work was done while he was THE TRIBUNE’s traveling correspondent. But Mr. Thomas’ health began to fail rapidly. That dread disease, consumption, had marked him for a victim. He decided on a change of climate and resolved to go to the Pacific coast. Accompanied by his only brother [Allen Thomas] he went to California about a year ago. He had letters from the proprietors of THE TRIBUNE and other friends and soon secured a position with the SAN FRANCISCO CHRONICLE. At first his health seemed to improve but later his decline became more rapid and losing strength to work, he turned his weary eyes to East Tennessee. He returned to the home of his childhood to die in his father’s house. After being confined to his bed for about four weeks, he passed away on the 6th day of this month. He had long been prepared for great change. Just before he died he told his father he dreaded only the sting of death, but as he was ready he would resist no longer. Five minutes after he breathed his last.

The body of Andy Thomas was buried in the Tolly [Talley] graveyard, one of the oldest family burying places in Tennessee. It is a picturesque place, overlooking the beautiful Nolachucky river. There a hundred feet above the mountain stream sleeps the body of a true hero who fought a brave battle against fearful odds. He was overcome but not conquered and his brave spirit now rests with the Great Commander on the other side. Andrew was a true man and a Christian. He bore his suffering with patience and withstood trials that would have crushed stronger men. Mr. Thomas leaves a wife and several interesting children who with the entire family will have the sympathy of all who know them in this bereavement.

The burial site was, no doubt, chosen because it belonged to the family of his step-mother Elizabeth Talley Thomas. The Talley Cemetery is off of Emanuel Road located in northern Cocke County near the Bend of Chucky. Like so many small family cemeteries, this one has been neglected and is overgrown. After Mr. Thomas’ death, his widow and their children moved to Cleveland, TN to live with her family, the Smiths.

Mr. and Mrs. Thomas had two children. (1) Paul Deen Thomas (1882-1944) became an attorney. Like his father, he also contracted tuberculosis. He migrated to El Paso, TX and recovered his health and became quite prominent. One of his famous cases involved defending the widow of Pancho Villa. Paul D. Thomas married Lillian Farr. (2) Louise Bartow Thomas (1885-1969) was a teacher and also lived in El Paso. She did not marry.