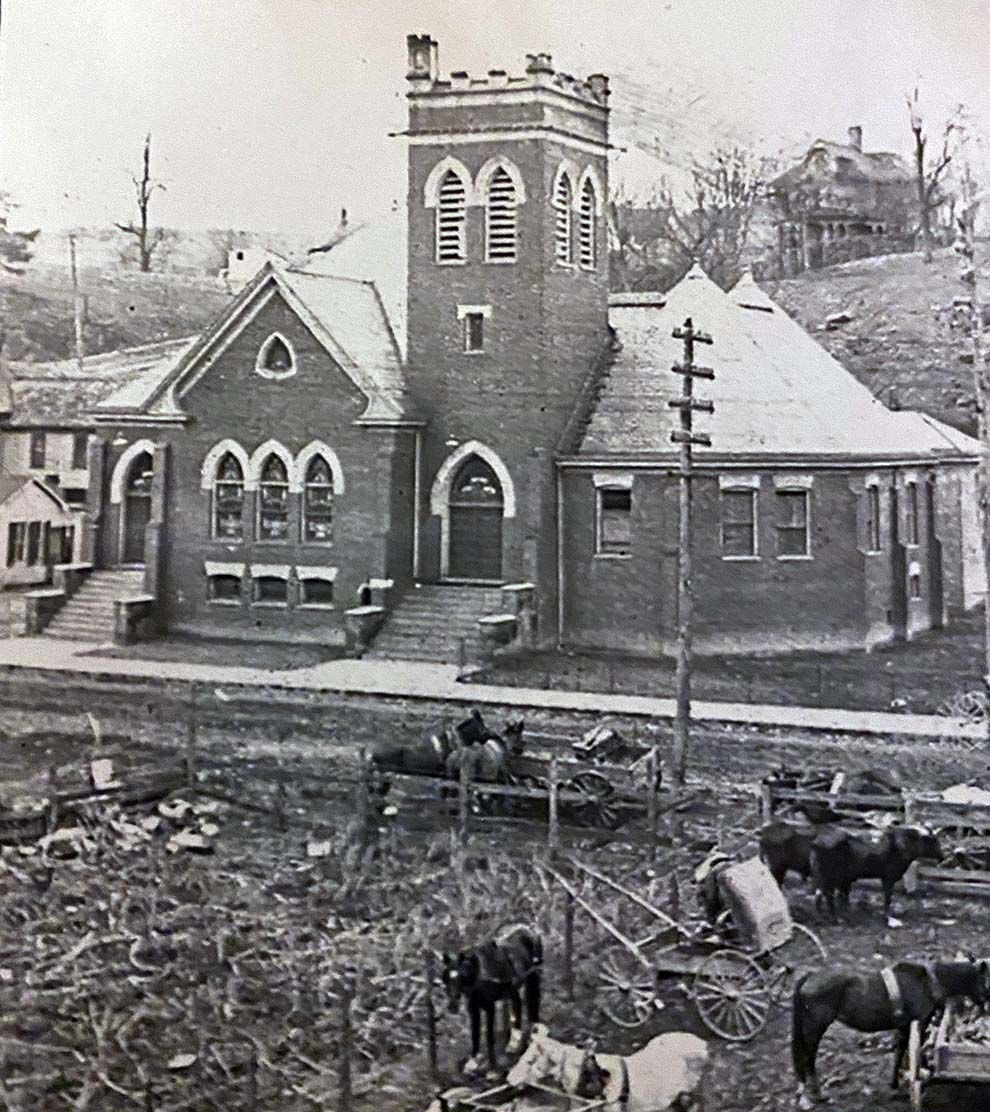 This picture was made by Burnett Smith from upstairs of Smith Drug Store. The livestock are on the site of the parking lot at Broadway and McMahan. 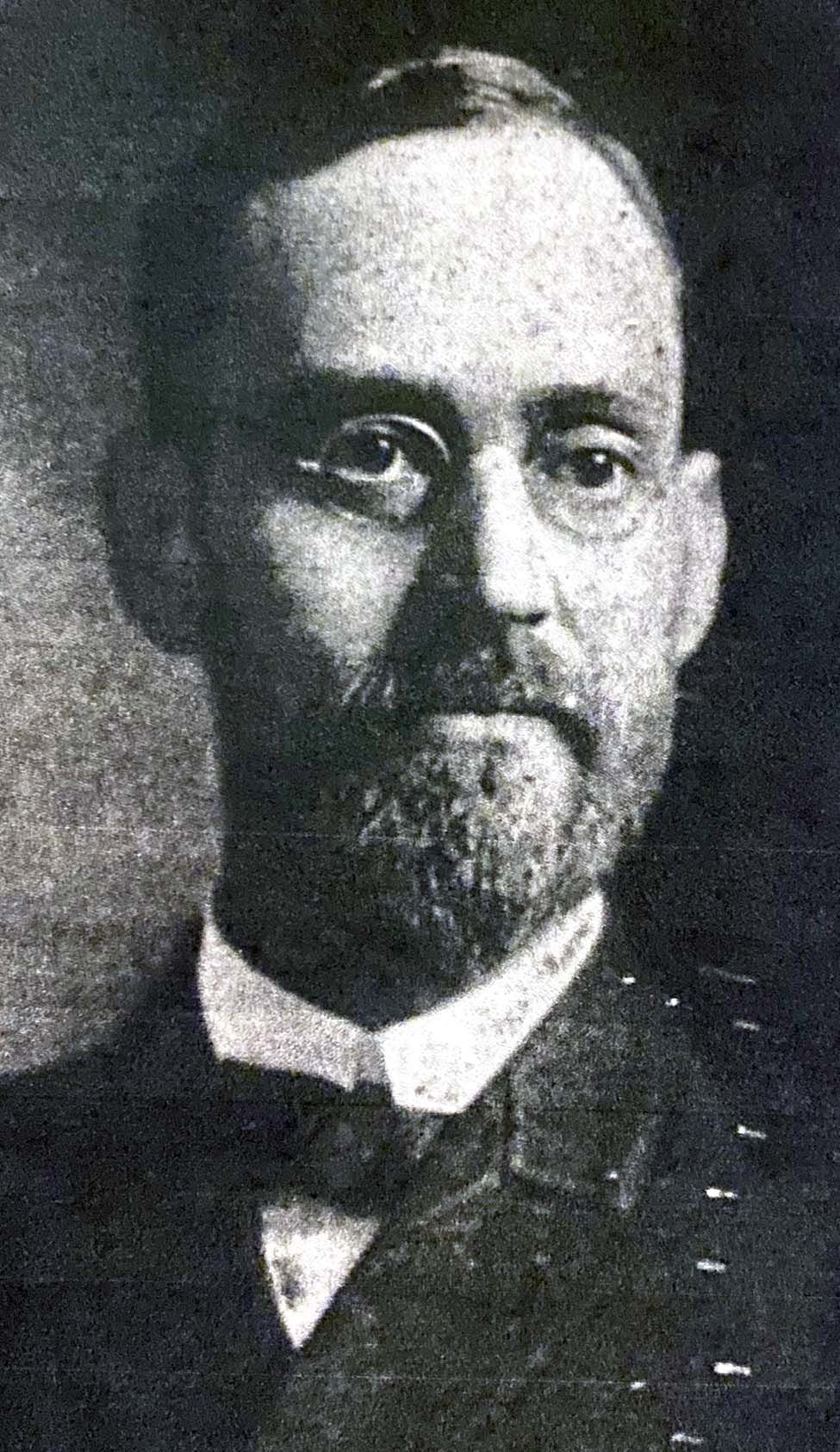 Rev. B.R. Downer was pastor when the 1906 building was completed.

This picture was made by Burnett Smith from upstairs of Smith Drug Store. The livestock are on the site of the parking lot at Broadway and McMahan.

Rev. B.R. Downer was pastor when the 1906 building was completed.

The organization of the First Baptist Church of Newport was perfected on Sunday, April 10, 1876 with twenty-eight charter members. The next year a frame building was erected on the site of the present educational building, the land having being donated by Judge James H. Randolph. This building was dedicated on May 6, 1877.

A news item appeared in the Knoxville Weekly Sentinel, January 8, 1904, under Newport News: The Baptists at a meeting last Sunday [January 3] decided by a unanimous vote to build a modern church here this spring. A committee was appointed to secure a location. The building they now have is of frame and out of date and there is a unanimous desire among the members of the Baptist church for a new building. It will cost $10,000.

An item in the Knoxville Sentinel, February 25, 1904, stated that the Baptists had decided not to the change the location of their church and to remain on the same site. A reversion clause in the deed from Judge Randolph may have been a deciding factor.

The pastor at that time was Rev. M.D. Early. In July 1904, he answered a call to Bowling Green, KY, so the building program was most likely put on hold until a new pastor could be called. Dr. B.R. Downer from the New Providence Baptist Church, near Clarksville, TN answered the call of the Newport church, arriving in January 1905.

Construction probably started early in 1906. This article was in the Knoxville Sentinel, March 21, 1906: NEWPORT BAPTISTS WILL HAVE HANDSOME CHURCH — The First Baptist Church at Newport will build a two-story edifice, the Sunday School room on the first floor and the auditorium on the second floor, the estimated cost being $15,000. Baumann Bros, of this city have completed the plans for the church. Owing to the condition of the lot, the church will have two stories, instead of a basement. It is impossible to have a basement as water is found after excavating three or more feet. The church will be on the colonial style and built of brick with a slate roof. The entrance will be on a large tile porch with gable overhead supported by three large columns. On each side will be a stairway leading to the auditorium five feet wide. On the second floor will be the auditorium with gallery in the rear and the choir loft over the pulpit with music rooms adjoining. The baptismal pool will be placed in the auditorium on the second floor under the choir loft. The plans are now finished and the contract will be awarded in the near future.

As the same site was to be used, it was necessary to remove the existing structure and during the interim period, the congregation worshipped at the court house. This was reported in the Baptist and Reflector, June 21, 1906

The new building was far enough along to lay the cornerstone in August 1906. Dr. Downer’s report was published in the Baptist and Reflector, August 23, 1906: Thursday, August 16, was an occasion of unusual interest for the Baptists of Newport. It witnessed the laying of the cornerstone of our new church building. The exercises opened with the singing of the Doxology, after which Rev. J.S. Black, of the Presbyterian Church, read selections of scripture and offered prayer. After another song a brief historical sketch of the church since its organization thirty years ago was read by the pastor. Rev. J.B. Simpson, pastor of the Southern Methodist church, then made a short address on behalf of the other pastors and churches of the town. After the depositing of the records in the cornerstone, a hymn composed especially for the occasion was sung and the service closed with prayer and benediction by Rev. Charles Brown.

It sounds like it was a nice service, but it was not agreeable to everyone. W.S. Roney, Magnolia, Arkansas, had a strong rebuke printed the Baptist and Reflector, September 13, 1906:…What business has [sic] Methodist and Presbyterian preachers helping lay cornerstones of Baptist churches? What relation do they sustain to Baptist churches anyway? What can a Baptist pastor hope to gain from the Lord and his brethren by having the assistance of these men, who belong to men-made churches rather than the church of Christ? What has come over some of our pastors of late in that so many are holding union (?) meetings and recognizing them as ministers of Christ?...I am not acquainted with the pastor at Newport but trust that he will never be caught on the hook of liberalism again, and that he will be a strong Baptist.

Brother Roney evidently hadn’t been told about the history of cooperation among the Newport churches. The Presbyterians had the first church building, Pisgah Presbyterian, adjacent to the cemetery which still exists. Actually then the church was a bit outside the corporate limits of town, but it was used by all denominations for a Union Sunday School and then by other preachers on a rotating basis as few churches had preaching every Sunday. The First Baptist Church was organized in the Presbyterian Church. After the Baptists had their own building, they still participated in the Union Sunday School for a time. As the Presbyterian Church was “out of town,” Wednesday night prayer meetings were union services and held in the Baptist Church because it was more easily accessible. What would Brother Roney have said had he known that First Baptist Church of Newport would be one of the first of that denomination to ordain women deacons?

The slate roof was installed in January 1907, and the congregation was able to use the Sunday School portion of the new building by May. Dr. Downer sent this report to the Baptist and Reflector: We have moved into the Sunday School room of our new church, after worshipping ten months in the court house… we have no distinct date to have the entire building completed. So far, about $8,000 have been put into it, and it is a matter of thanksgiving that there are uncollected subscriptions to pay all indebtedness.

The finishing work took some time, for the congregation was not able to use the auditorium until late November. In a letter to the Baptist and Reflector, December 19, 1907, Mr. Downer told of the successful revival of three weeks just ended at the church by the Rev. G.W. Sherman, and he added: We held our first service in our new auditorium with the beginning of the meeting.

Brother Downer resigned his pulpit in Newport in September 1908 to accept a position as Professor of Old Testament at the Kansas Baptist Theological Seminary, Kansas City, KS. The Baptist and Reflector, October 1, 1908, wrote: Brother Downer has done a remarkably fine work at Newport. The new building erected under his pastorate is only an outward expression of the work which has been accomplished. He is held in high esteem…as a pastor and as a preacher. He is one of the most scholarly men in our Baptist ministry. The issue of October 15, 1908, printed Resolutions of Appreciation from the Newport church by B.W. Hooper, H.N. Cate and Dr. C.T. Burnett.

In forty-five years, this fine building was no longer adequate and a new church was built adjacent to the old church at a cost of $290,000. Ground was broken on Easter Sunday, April 18, 1954, and the cornerstone for this building was laid on February 20, 1955. The dedication was Sunday, October 23, 1955. In 1961 the old building was razed for an education building, which was dedicated July 14, 1963. Now, nearly sixty years later, the present building no longer meets the needs of the congregation and they are in a building program. Such is life, such are the times in 2021, just as in 1906.