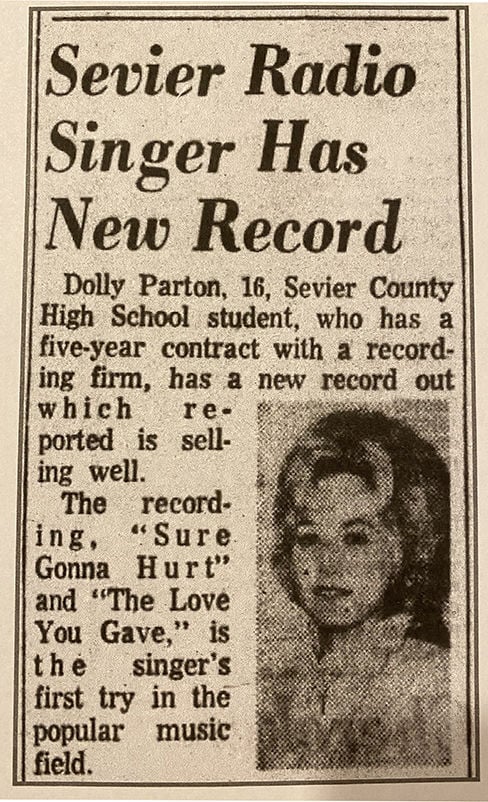 One of Dolly’s first musical contracts appeared in the Knoxville Journal, August 25, 1962. 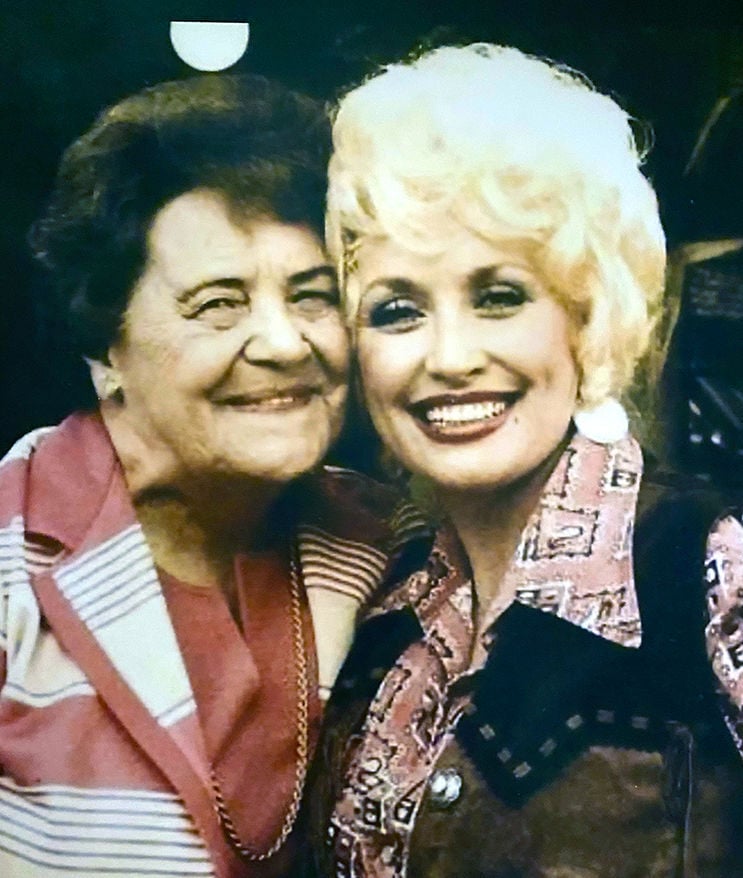 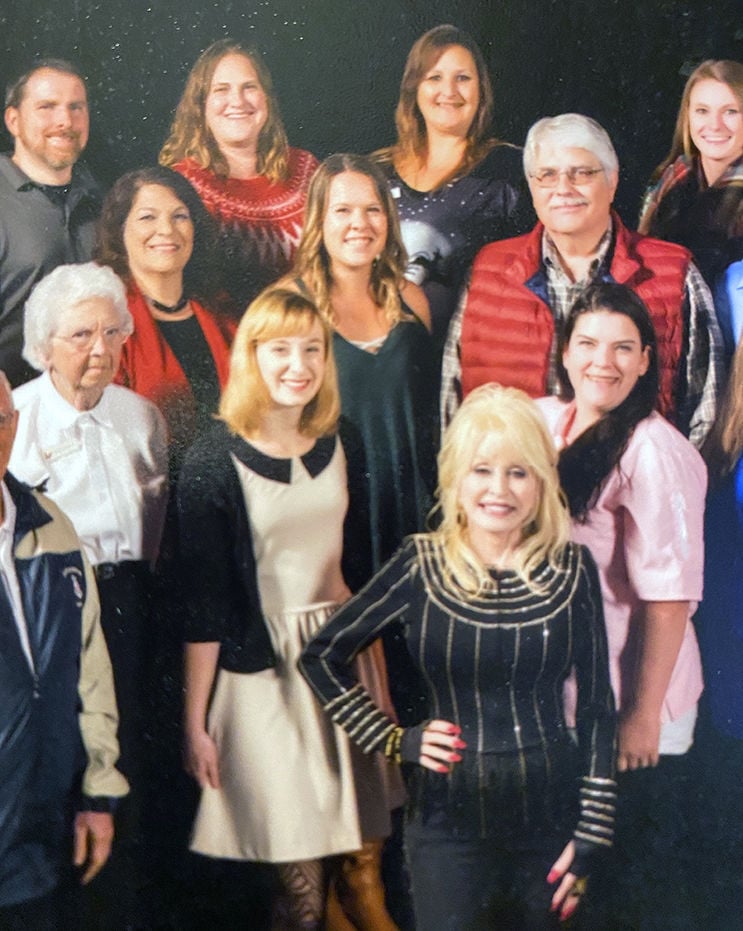 Dolly with a group of her employees at Dollywood in 2018.

One of Dolly’s first musical contracts appeared in the Knoxville Journal, August 25, 1962.

Dolly with a group of her employees at Dollywood in 2018.

A national icon is reaching a milestone. As hard as it is to believe, East Tennessee’s Dolly Parton will be 75 on Tuesday, January 19. However, for most of us, she remains ageless.

It would be difficult to imagine that anyone here does not know who Dolly Parton is, yet it is told that there are U.S. citizens who come to the Billy Graham Library in Charlotte with no knowledge of him.

If you don’t know, Dolly Parton has been one of the premier celebrities in America, one of the Queens of Country Music, a philanthropist and a purveyor of good will for more than fifty years, AND she came from neighboring Sevier County and proud of it. Dolly’s home was on Locust Ridge, which lies between the communities of Pittman Center, Jones Cove and Richardson Cove, off of Hwy. #419.

Dolly’s roots go deep into the heritage of the Smoky Mountains, and there are many Cocke Countians whose family trees share the same roots. Through her father, Robert Parton, she descends from Revolutionary soldier, Frederick Emert (1754-1829), who settled in what is now called Emert’s Cove. Dolly’s ancestor was his daughter Catherine. Another daughter was Barbara Ann Emert, who married Martin Shults; they are the ancestors of all the Shults clan of Cocke and Sevier counties.

Another one of her father’s ancestors was Revolutionary soldier Henry Bohannon (c1760-c1842). The Partons descend through a son Henry, Jr. Old Henry had three daughters — Susannah, Nancy and Sarah — who married respectively Isaac (Shucky) Ogle, William (Black Bill) Ogle and William T. Ogle — and many Cocke Countians descend from one of those marriages. Another one of Old Henry’s descendants is actor Brad Pitt.

Dolly’s mother was Ava Lee Owens, whose mother was a Valentine. The Valentines in this area all go back to one of two brothers William (b. c1787) and Henry (b. 1795) who married sisters Rebecca and Dorcas Green. The Green sisters had a brother William who married Sallie McMahan. Their descendants go into the Baxter and Ramsey families of Cocke County.

Another one of Dolly’s ancestors was Revolutionary soldier Christian Messer (1760-1850), who lived in the Fine’s Creek section of neighboring Haywood County. He was also the ancestor of the Messers who migrated a few miles westward into Cocke County, settling in the Hartford area. Another Haywood County ancestor was Cornelius Sutton (b. 1801). Dolly descended from his son Richard Sutton, but it was Cornelius’ daughter Sally who married Jonas Tobias Phillips and lived in the Chestnut Mountain part of the county. They have a large number of descendants here in the county.

Even though it is not blood, I do have a connection with Dolly. My grandmother’s first cousin, Mrs. Archie Ray McMahan, was Dolly’s first grade teacher at the Locust Ridge School. It is an interesting story which I’ve written about before.

Archie Ray had been a teacher, but for some reason, was not planning to teach the 1952-53 school year. The superintendent contacted her and asked if she would substitute at Locust Ridge for the first week as he couldn’t yet find anyone willing to teach there. She agreed. A teacher still couldn’t be found at the end of the week and she agreed to stay the second week. After that week, she wanted to stay, and she admitted that was probably what the superintendent had in mind all along.

Archie Ray said that, even then, Dolly wanted to sing. At recess, she was often standing on a rock singing with a stick as a microphone.

Dolly didn’t forget her first teacher. When Archie Ray celebrated her 90th birthday, Dolly made a special video to be shown at the party, and when she died in 2010, Dolly sent an impressive arrangement of dozens of pink rosebuds, along with signature butterflies. It was placed right at the head of the casket.

In this area now, Dolly is most connected with Dollywood rather than her celebrated musical and acting career.

This theme park was established as Rebel Railroad in 1961. In 1970 the name was changed to Goldrush Junction. In 1976 it became Silver Dollar City, and when Dolly purchased an interest in 1986, it became Dollywood.

Dollywood has received many awards over the years in the area of friendliness, food, types of amusements, kids’ area, as well as the Christmas event and the best wooden roller coaster.

Dolly has been quoted as saying that it was always her dream that if she made it big, she wanted to come back to her part of the country and do something that would bring a lot of jobs to the area. She did just that with Dollywood. With over 4000 employees, it is Sevier County’s largest employer.

In addition to Dollywood, Dolly has been engaged in many acts of philanthropy. Her Imagination Library has provided books for children worldwide since 1985. She has worked to save the bald eagle and abused animals through People for the Ethical Treatment of Animals (PETA).

In 2016 when wildfires ravaged the mountains of Sevier County, she quickly organized a telethon to fund a foundation called “My People,” which provided aid to those who had been most severely impacted. She contributed generously to research on HIV/AIDS and most recently for Covid-19.

Local people who have had personal contact with Dolly say that she is still a “down home” Sevier County girl. One told of going to eat in Pigeon Forge with a friend, who had been a classmate of Dolly’s. In the restaurant at that time were Dolly (out of costume) and her father. Dolly quickly called them over to talk just like ordinary folks do. Bill Chambers was working at a hardware store in Sevierville, when Dolly herself called asking that an appliance be sent out to someone. Although some stealth work was required for her to do it, Dolly went to the Sevierville hospital to see a sick cousin.

Dolly Parton is someone in whom East Tennesseans can take great pride.

Incidentally, I have a brother in Colorado who shares a birthday with Dolly. He, too, will be 75 on January 19. Happy birthday to you, too, Don.