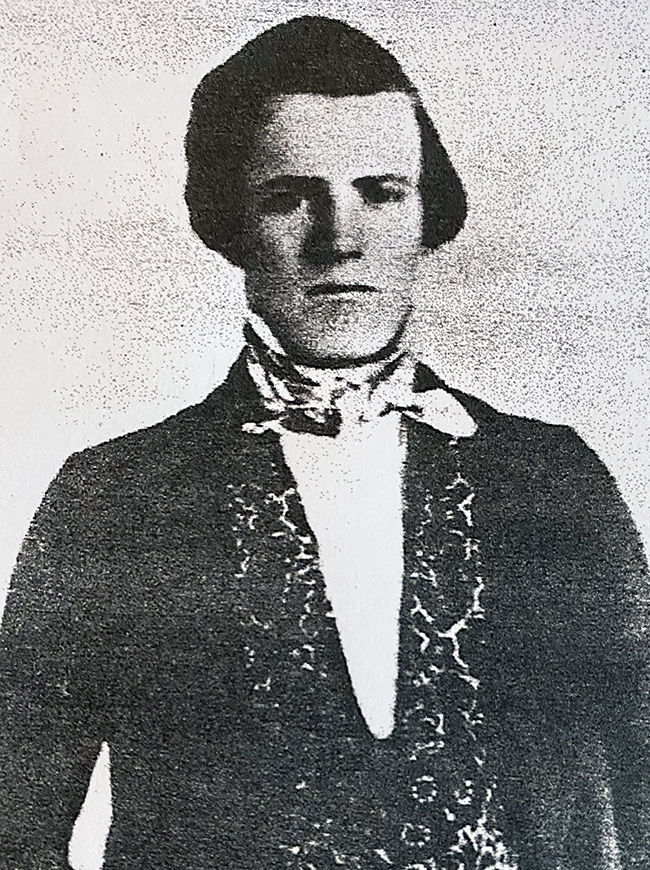 Rev. W.B. Helm was one of the early preachers at Pine Chapel. He was the great-grandfather of Leta Helm Ratcliff. 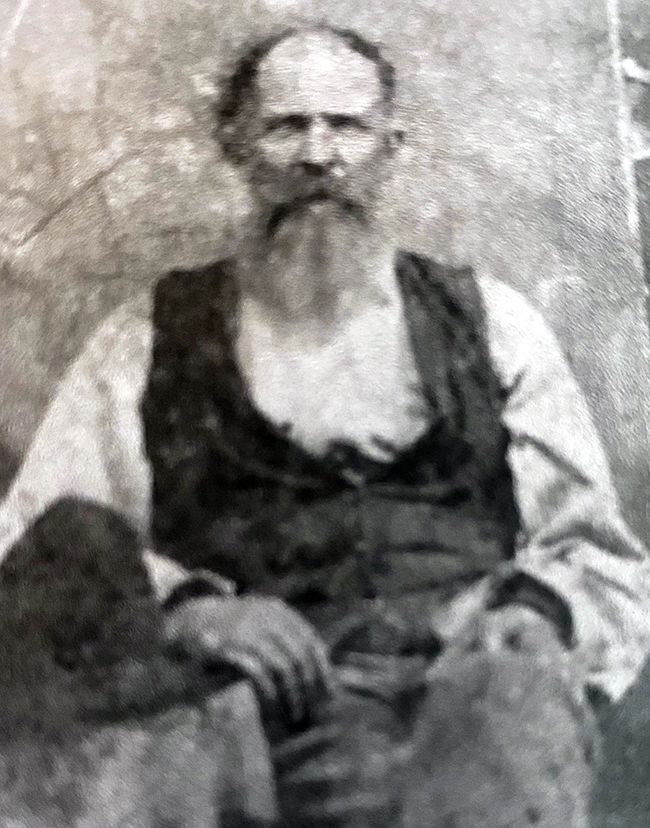 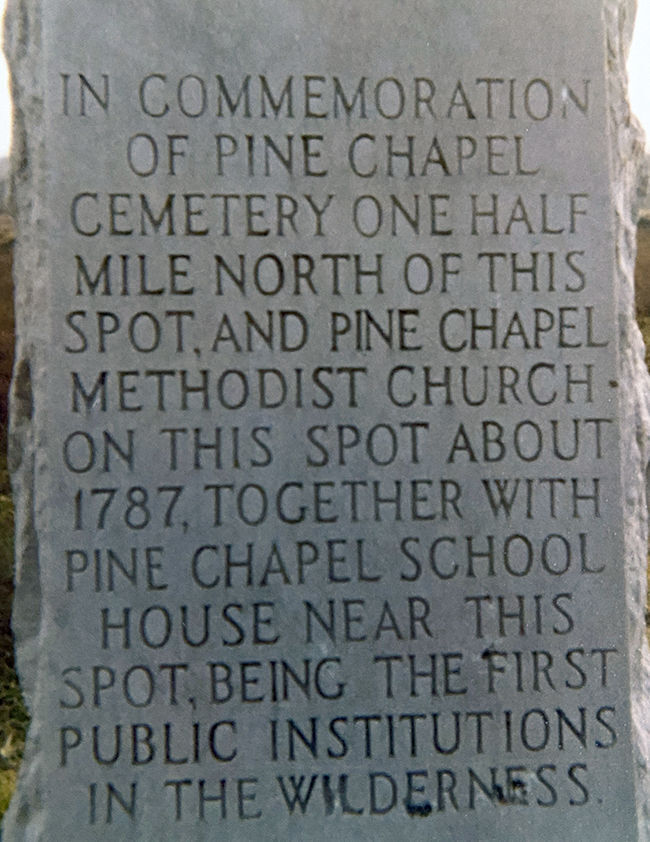 The inscription on the Pine Chapel monument on Hwy. 70. The monument was erected by Rev. Pritchett in 1965. 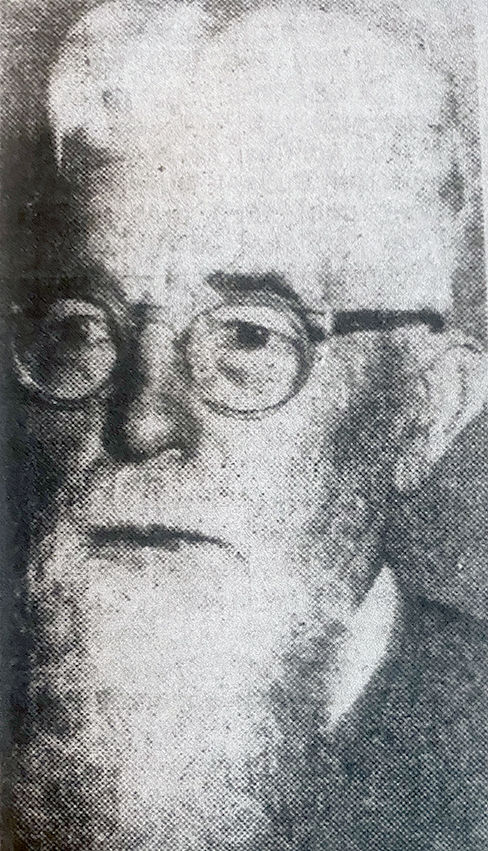 Rev. Reuel B. Pritchett worked to preserve the history of Pine Chapel. He also established the Jefferson County Museum.

Rev. W.B. Helm was one of the early preachers at Pine Chapel. He was the great-grandfather of Leta Helm Ratcliff.

The inscription on the Pine Chapel monument on Hwy. 70. The monument was erected by Rev. Pritchett in 1965.

Rev. Reuel B. Pritchett worked to preserve the history of Pine Chapel. He also established the Jefferson County Museum.

Pine Chapel was a Methodist congregation in Jefferson County in what is now known as the Swannsylvania community. Established about 1787, it was one of the first Methodist societies in this area.

Shortly before, a group of families had migrated from North Carolina and Virginia and settled (illegally!) in the region. These included the families of James and Arabella Winton, Amos and Mary Lewis, George and Rachel Lewis and Mrs. Arabella Cunningham.

In its earliest years Pine Chapel was just a group of believers who met for worship in their homes. The groups were also called “classes” and worship was conducted by the “class leaders.” It was some years later that the classes organized themselves into congregations and built churches. Some of the families who were associated with Pine Chapel were the Dentons, Turnleys, Lickliters, Helms, Cowans, McAndrews, Gigers, Swicegoods, Gregorys, Hills, Hedricks and Taylors.

George Cunningham, who was killed in 1793 at the same time as the Lewis children, was a son of Mrs. Arabella Cunningham. In “Holston Methodism”, published in 1903, Dr. R.N. Price told the story of Pine Chapel, which he named “for many years an outpost of Methodism.” He described Mrs. Cunningham as having “superior [spiritual] gifts” and acting as the class leader of the society. (Apparently the men of the class had no objections.)

Dr. Price also mentioned that the Methodist cause in other parts of the area was greatly influenced by the work of the Pine Chapel society. No doubt, it played a part in the establishment of other Methodist churches nearby — Lawson’s, Bogart’s, Seahorn’s, Hill’s, Chestnut Hill (which was originally Haskew’s), Reidtown and Pleasant Hill. The only church not existing today is Reidtown. Hill’s and Pleasant Hill were merged into Hill’s Union in 1943 when the impoundment of Douglas Lake required their removals. (The present building was Hills Chapel; the bell came from Pleasant Hill.)

In 1825 Joseph McAndrew sold 2 1/2 acres for $5 to the trustees “for the purpose of erecting a church at the Pine Chapel Campground.” The trustees were Frederick Lickliter, John Hill, William Hill, John Cowan, Gabriel Lewis, George Giger and Moses Burnine. Evidently there had not been a building prior to this time.

A notice in the Jonesborough Whig and Independent Journal, July 5, 1843, announced that a camp meeting at Pine Chapel would begin on August 18.

Mrs. Karen Smith recently shared some documents relating to Pine Chapel which she had found among the papers of her grandfather Bruce Helm. In 1843 a campaign was held to raise funds to build a church. The specifications for the church stated that it was to be 30 feet long, 24 feet wide and 12 feet high with one door, three windows and a pulpit and was to be built of good heart white oak, no sap wood. It was to be based on six rock pillars, at least a foot off the ground. It was estimated that it would take 60 logs, up to 16 feet in length, to be sawed into corner posts, weatherboarding, studs, rafters, laths, ceiling and flooring.

Evidently they came up short! Included in the papers from Mrs. Smith is a report, dated June 3, 1854, to the Quarterly Conference of the Sevierville Circuit from the trustees of Pine Chapel, namely Wm. B. Helm, J.W. Hedrick and George Lewis. The report stated that although the church had been built in 1845, it “had been for years in an unfinished condition.” The interior was not completely ceiled, there were no window sashes and “no stove or fireplace” which made it unusable during the winter.

In 1852, the people of the community wanted a “Public School house” and John C. Turnley of Pine Chapel proposed that if the money could be subscribed Pine Chapel could be “fitted up” and used until such time that a separate schoolhouse could be erected. This was done, even the erection of “a splendid Brick Chimney.” It was specified that the school conduct religious exercises morning and evening, so that “moral and scientific training could be united.”

The work was completed and school began on April 13, 1854. The circuit preacher, Brother Keen, organized a Sabbath School “which has been going on with increasing interest.”

The Rev. Reuel B. Pritchett, a Brethren minister and lover of history, sought to preserve the record of Pine Chapel. In 1965, he oversaw the erection of a monument on Hwy. 25/70 adjacent to the present Kenny’s Market, as well as the placement of a marker in the Pine Chapel Cemetery. Rev. Pritchett was also responsible for the establishment of the museum in the Jefferson County Court House.

On October 9, 1977, the Commission of Archives and History of Holston Methodist Conference met in Newport. The Rev. Reid Wilson presented a history of Pine Chapel and the group traveled to Jefferson County to view the site. Among those in the group were local persons whose ancestors had worshipped at Pine Chapel.

Whether it remained in the church building or a schoolhouse was built is not known, but Pine Chapel School was still existing in 1894. In the Morristown Gazette, August 22, 1894, was the announcement that a Teacher’s Institute would be held at Pine Chapel School in Jefferson County.

The Stokelys were children of Col. and Mrs. John B. Stokely who lived on the Holly Oaks farm. Mrs. Stokely and sons later started the canning industry there. The Fairfields lived nearby to the west on what is now the Wild Pear development. Toliver Thomas lived east of the Stokelys; he was the father of Miss Elizabeth Thomas and her siblings.

The old Stokely home was purchased and restored by Mr. and Mrs. W.A. Catlett. When the restoration was completed and the house opened for touring in 1960, the old schoolhouse was still standing. The Pine Chapel Cemetery is still there near the intersection of Stokely Court and Holly Oaks Lane. When the Stokely/Catlett home burned in 1983, Mr. Catlett was unable to escape.

There is the line in the familiar hymn “faith of our fathers living still.” The faith of the men and women of Pine Chapel is still alive here in our area, as well as in other places across the country.