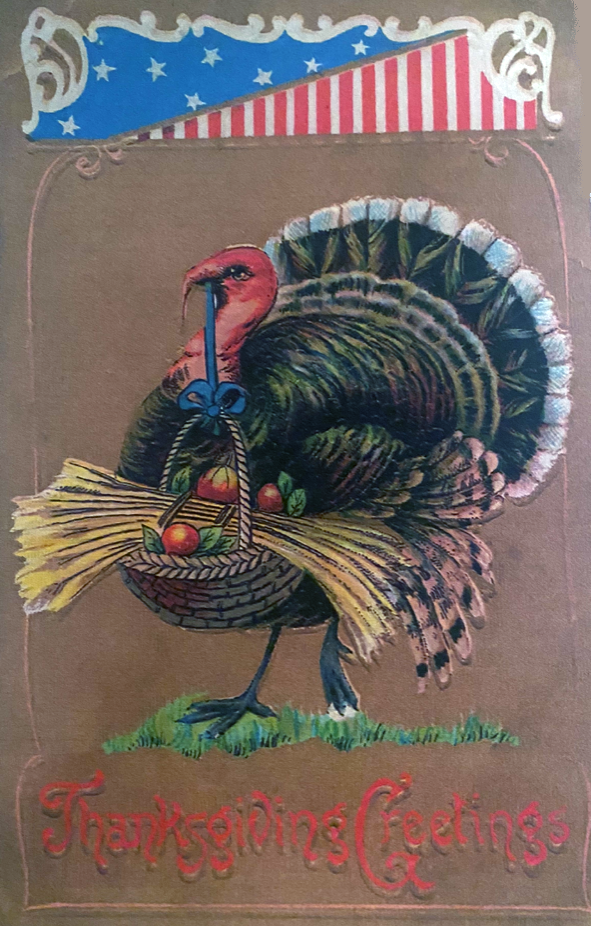 A Thanksgiving card from the World War l era 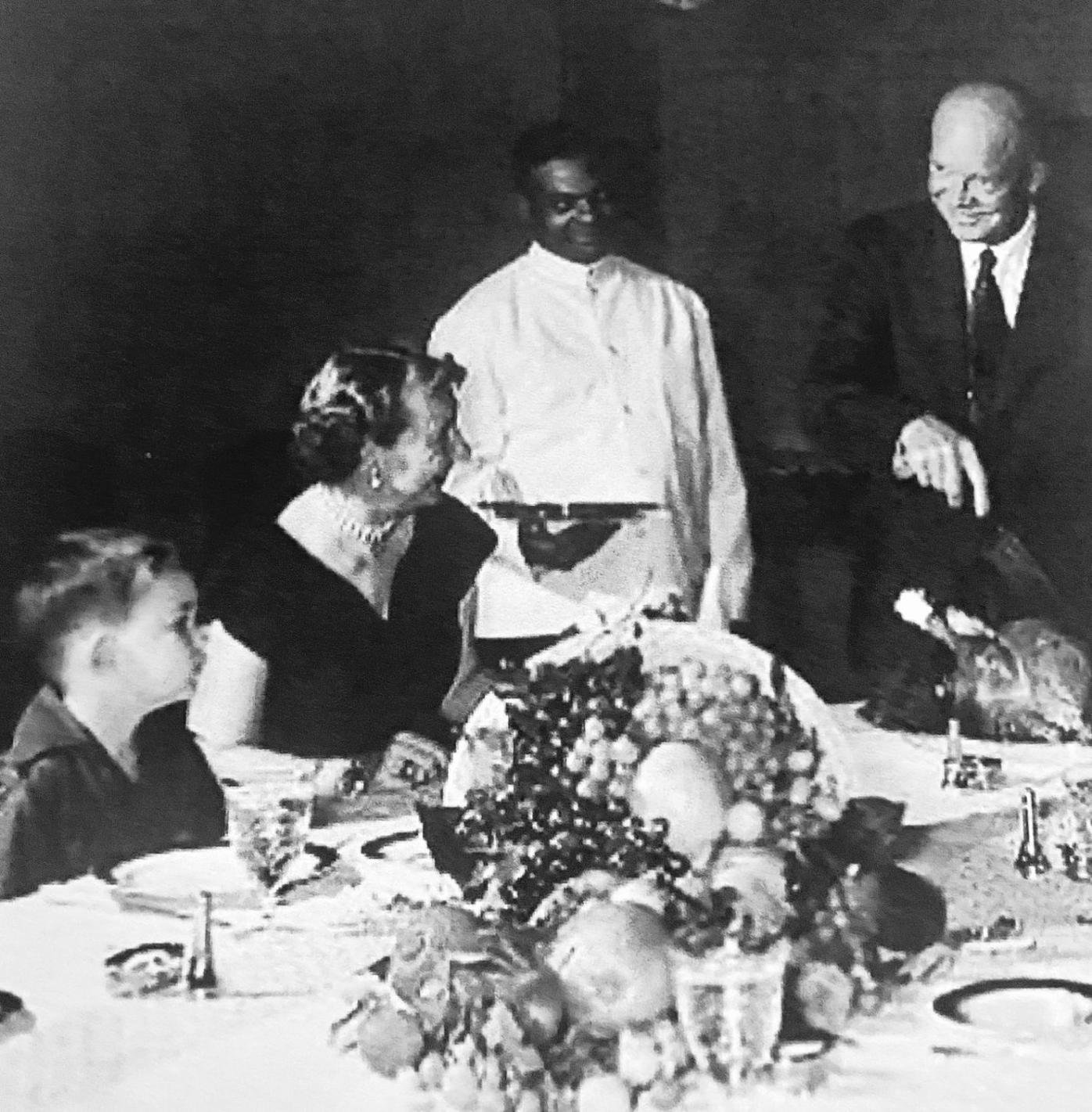 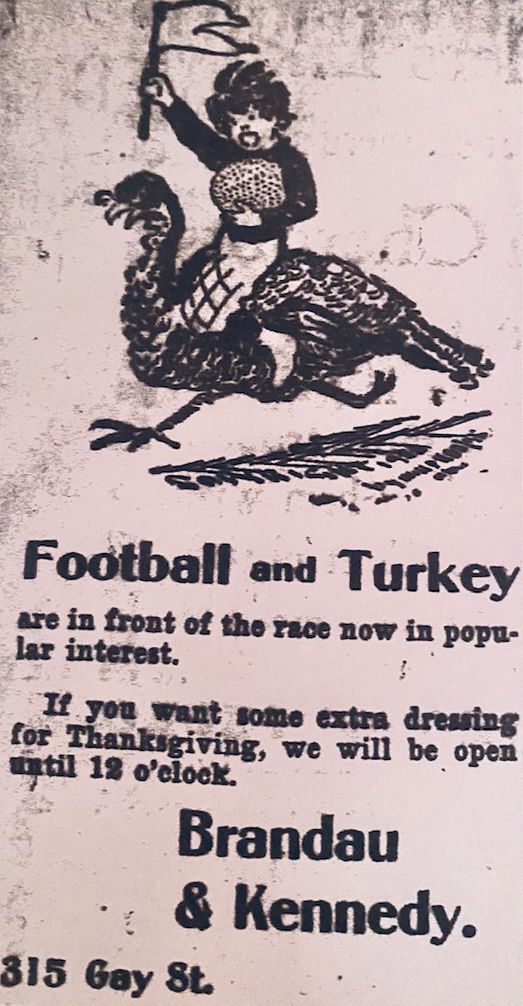 An ad from the Knoxville Journal and Tribune in November 1900. 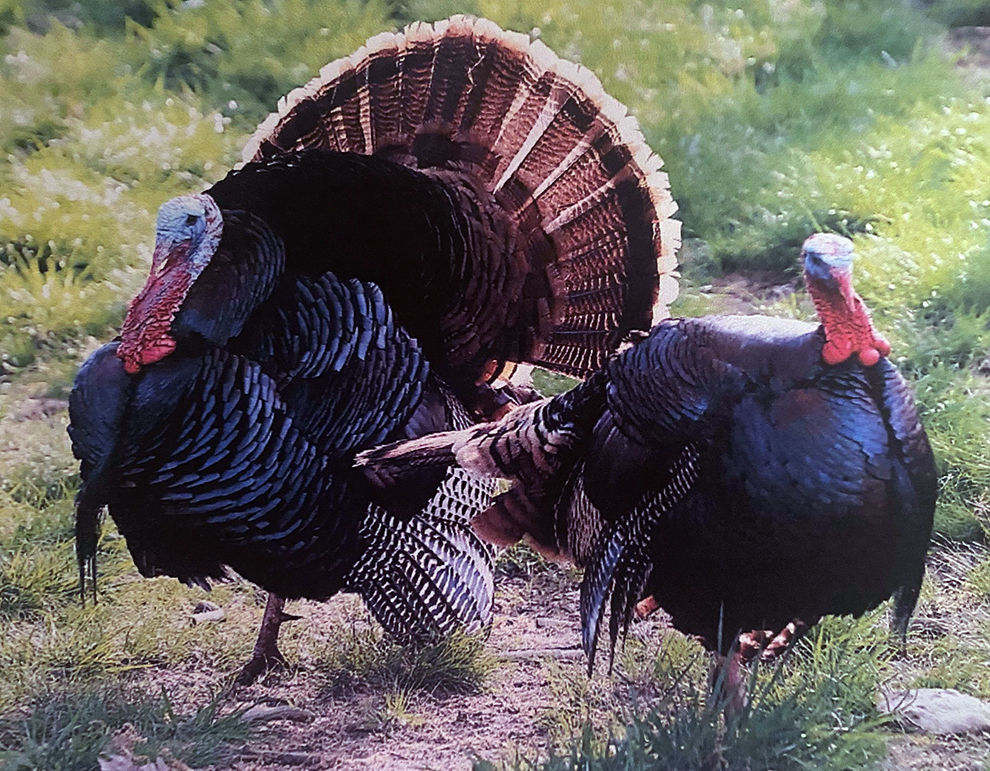 A Thanksgiving card from the World War l era

An ad from the Knoxville Journal and Tribune in November 1900.

Thanksgiving is almost here, and what would the holiday be without turkey and dressing? Of course, there are some who do not care for turkey and others who feel likewise about dressing, but for many, these are the centerpiece of the holiday feast. Turkey has long been regarded as a delectable meat, and farmers have been raising turkeys, along with their chickens, for years and years. (Often that was the job of the women in the families.)

The turkey is native to North America. The Native Americans had trapped and domesticated them before the Europeans settled here. There was another turkey breed which was first in Spain and then taken into the European countries by the 1500’s and later brought to Jamestown in Virginia.

In 1967 the Wildlife Society declared that the US domestic turkey was not descended from the native wild turkey, yet there are records where wild turkey eggs were gathered and placed under domestic turkey hens. Also, turkey breeders were told that introducing a wild tom into their flocks could strengthen their stock.

Because of loss of habitat, the wild turkey population had dwindled to an estimated 30,000 by 1900, but with controlled breeding and conservation practices, it has grown to an estimated seven million today. Now it is not uncommon to see wild turkeys in the rural areas not far from town.

Turkey hunting has become a popular but challenging sport. Turkeys have excellent eyesight except at night. Their vision is about three times greater than humans with a 270 degree range, whereas man’s is 180, thus they can easily sight hunters. Turkey season in 2022 will be April 2-May 16 from sunrise to sunset with a bag limit of three bearded birds, only one per day. A notice in the Morristown Gazette, August 15, 1877, stated that wild turkey season was October 16th-January 31st.

For those who have never had it, wild turkey is mostly dark meat. The flavor can vary according to the birds’ forage. There is a gamier taste in late summer because of the amount of insects consumed. Wild turkeys who have fed more on grass or grains tend to have a milder taste.

It is a myth that Benjamin Franklin wanted the wild turkey to be our national bird instead of the eagle. That story derives from his criticism of the appearance of the eagle on the National Seal. He said it looked like a turkey which was a more honorable bird than the eagle.

Raising a flock of turkeys is not easy. The following article appeared in the Morristown Gazette in 1873: Farmers who live in sparsely settled districts abounding in large dry pastures can afford to give the time to a faithful and intelligent lad the whole summer through, to be devoted exclusively to rearing turkeys. The young broods must be watched as constantly as a shepherd watches sheep in a region infested by wolves. Every night or during the day, on the approach of rain, they must be driven to a roomy shed with a tight roof. The mother bird and young can be soon trained to be driven as easily as cows are driven to pasture. Give good forage ground and keep out rain and dew and success is almost certain. A writer on the subject of raising turkeys suggests using a wild gobbler to make the brood hardy.

My grandfather said that his family raised turkeys. He remembered having to get the turkeys out of the rain because of their tendency to look up which allows the rain to go down their nostrils and potentially drown them. In addition to wolves, also foxes, raccoons, hawks, owls and dogs would prey on the young turkeys or poults.

Turkeys were very saleable. In the Knoxville Journal and Tribune, November 24, 1901, it was reported that that year 5,000 to 8,000 turkeys were needed just for Knoxville. (Think about all the other places and how many more turkeys would be needed.) Where did they come from? This was added: While all the counties about Knoxville furnish more or less the Thanksgiving market, Sevier county is said to supply a larger proportion of the birds than any other county in East Tennessee, although there is scarcely a farmer in East Tennessee who does not raise at least a small flock of turkeys.

How did the turkeys get to market? Basically they were walked to the nearest railroad station. A turkey drive required one drover for every 100 birds. The lead drover scattered corn to keep the flock moving in the right direction and the others had to keep the birds from straying; if one turkey went off, others were prone to follow. Also, the drovers had to watch for that occasional person along the way who was seeking to nab a straying turkey as a nice addition for their own dinner without the trouble of raising it or paying for it.

A turkey drove could travel 10-12 miles per day. They had to be at the destination before dusk; when one turkey decided it was time to roost and flew up into a nearby tree, the others would follow suit! On December 1, 1875, in the Morristown Gazette it was announced that Jehu Morris and John Smith, produce and stock dealers, were receiving turkeys “by the drove” and that 400 were expected the next day. The next week it was reported that Morris had per- sonally gone to Atlanta to superintend the sale of the shipments of poultry from Morristown.

Next comes the morbid part of the story — getting the bird to the dinner table. Some readers may have first-hand experience in this process of killing and dressing, but if anyone is so inclined to learn more about it, there are several videos online. Personally, I would wait until after Thanksgiving to watch them; you might view that platter of meat on the dinner table differently.

It was suggested that the turkey be placed in a tow sack before starting the process, as the talons could be hazardous to the executioner. When I asked my grandmother if she had ever dressed a turkey, she quickly replied “Once,” with a tone that indicated it was her first and last such experience. Most would agree that picking one out at the grocery store is preferable to “doing-it-yourself.”

There are several ways to cook a turkey, and every family has its preference. In the days of the wood stove, the turkey was stewed or steamed in a covered roaster on top of the stove for several hours, then uncovered and placed in the oven for browning. Families also have their preferences as to the dressing (or stuffing) — ingredients, preparation, serving — and usually one person in the family excels in making the dressing.

A reporter in November 1899 interviewed some prominent men concerning preferences on their Thanksgiving birds. President William McKinley stated that he did not like his turkey stuffed but roasted with a string of sausages roped across the breast for seasoning. Both ex-presidents Benjamin Harrison and Grover Cleveland wanted their birds stuffed. Harrison liked chestnut stuffing and Cleveland wanted highly-spiced bread stuffing.

Another part of the Thanksgiving Day tradition is watching NFL football. Did you know that football and Thanksgiving have been paired a long time? Pictured with this article is a cartoon from the Knoxville Journal and Tribune in 1900. Tennessee first played Alabama on Thanksgiving Day in 1901. UT and Kentucky played on Thanksgiving Day from 1913 until 1938. They were scheduled to play on that day in 1939 until President Roosevelt moved Thanksgiving Day to another week. Since that time UT has played either Kentucky or Vanderbilt on the following weekend.

Turkey and tryptophan have been falsely accused of causing the Thanksgiving afternoon naps. Nutritionists have pointed out that overeating of heavy menu and alcohol are more apt to induce sleepiness than the small amount of tryptophan consumed. ZZZZZZZZZZZZZZZ!

Whether you have turkey or something else on Thanksgiving, may it be eaten with gratitude for the bounty, which has been ours through this past year. Yes, there have been ups and downs, triumphs and tragedies, but we as Americans still have been blessed in many ways. Happy Thanksgiving!