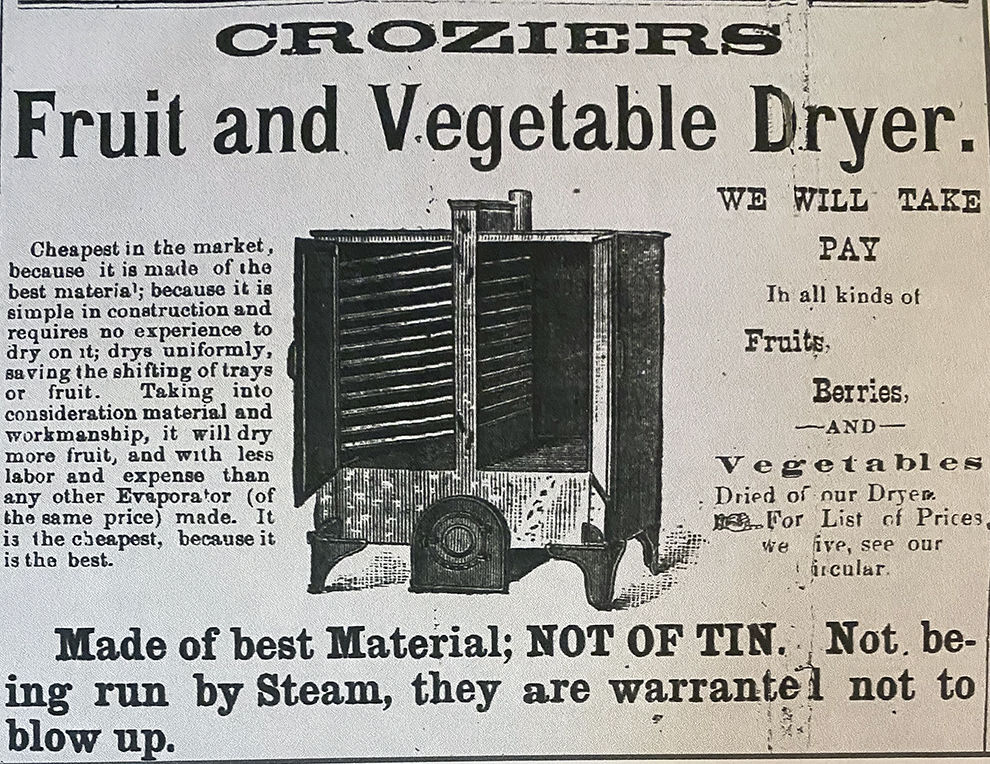 A fruit dryer as advertised in the Knoxville Daily Chronicle in 1883. 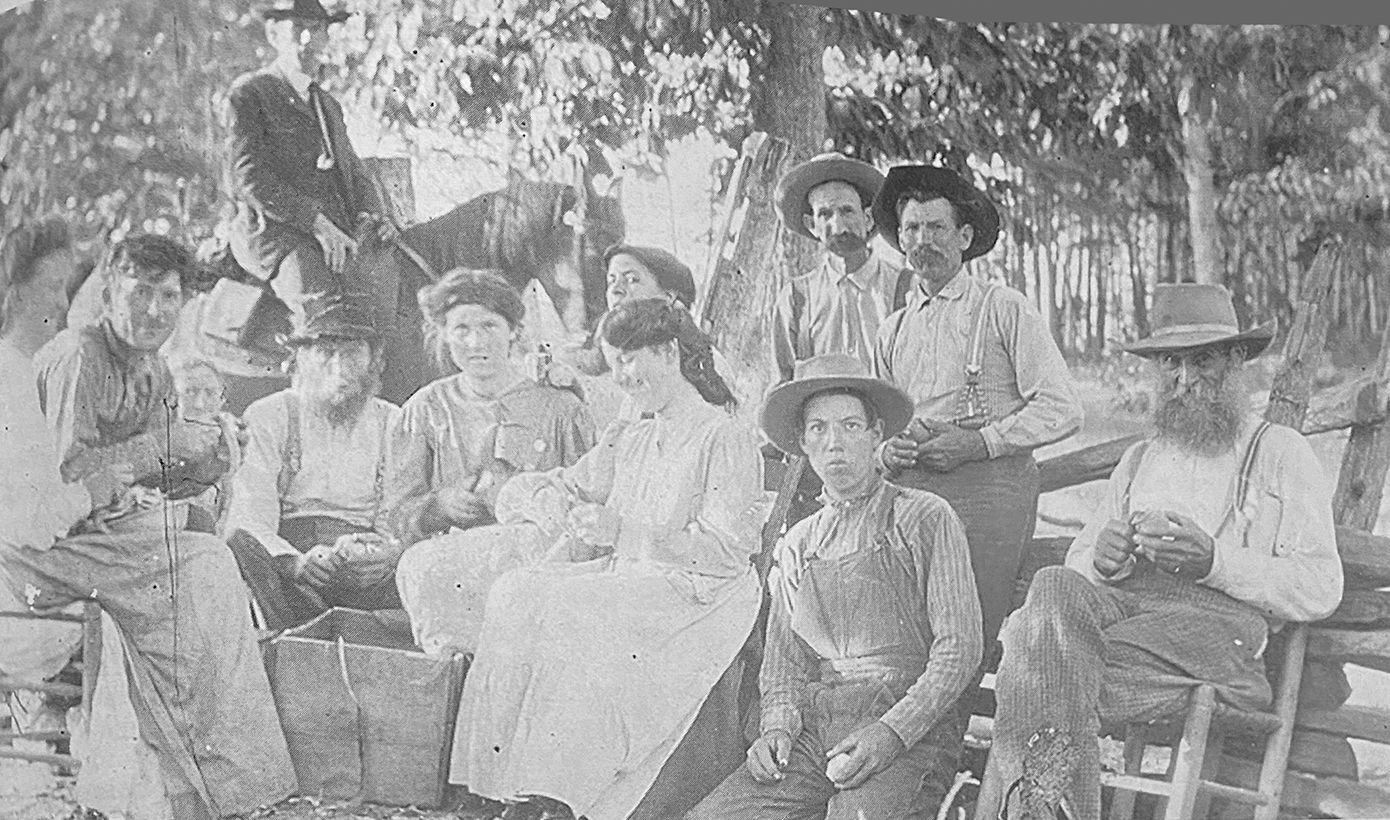 The Baxters in Bogard were pictured while peeling apples, perhaps getting ready to make apple butter.

A fruit dryer as advertised in the Knoxville Daily Chronicle in 1883.

The Baxters in Bogard were pictured while peeling apples, perhaps getting ready to make apple butter.

It is Fall and that means apples. Does anyone remember the huge red apples that Col. Bullard always seemed to have in his car to give away?

There is that assertion that it was Eve’s bite into an apple in the Garden of Eden that started the fall of mankind. The verse just said “she took of the fruit thereof and did eat,” but was it an apple? Could it have been a pear or a peach or a plum? In the Song of Solomon 2:3 is found the reference “as the apple tree among the trees of the wood…” so there is the proof that apples have been around a long time.

Today apples are probably taken for granted. With refrigeration and transportation they can be available year-round. That, however, was not always the case, and apples were a staple in the lives of the people. An orchard was a valuable part of a farm. The earliest journal reference that could be found was in the Knoxville Gazette, July 15, 1796. A farm of 600 acres in Knox County was advertised for sale.

Mentioned not only were the springs, buildings and timber but also “a fine young apple and peach orchard.” In succeeding years, land advertisements usually listed an orchard as a selling point. In 1836 the Mount Pleasant plantation was to be auctioned. It was located on the French Broad River “on the great road leading from Dandridge to Newport” and had an apple, peach, cherry and pear orchard. (It was near present day Swansylvania.)

Nature handles the growing and production of apple trees but planting and cultivating an orchard is a science, a talent and an investment of labor. Having the right land with proper exposure, drainage and space comes first. An article in in the Knoxville Register in 1834 stated that ground should be sandy soil on a bed of fine clay interspersed with flint rocks. It also instructed the proper technique for planting and spacing the trees.

The rainfall and temperature range on the Appalachian Mountains are ideal for growing apples. Starks Brothers says that it will take up to five years for a tree to reach bearing maturity, but the late Mrs. Kyle Carver told Bill Landry on a Heartland segment that her husband felt that it took thirteen years. The Carvers would know because they themselves have been in the orchard business since 1942, but several preceding Carver generations had managed orchards in what is now the national park.

The technique of grafting has been practiced since ancient times. It is even mentioned in the Bible, Romans 11:17. It was in 1750’s when American orchardists began perfecting grafting of apple trees. Because of grafting, today you can purchase one tree that bears different varieties of apples from the same trunk.

Perhaps this bit of mountain trivia should be mentioned. Oftentimes when the older folks referred to “fruit,” they meant just apples. A fruit pie was an apple pie. Peaches were peaches, plums were plums, but apples were fruit.

How long will an apple tree live? The oldest documented apple tree died this year in Vancouver, WA. It was an “English Greening” which had been planted in 1826 fur traders with the Hudson Bay Company. While the trunk has been “declared dead,” the root system is still living and there are shoots springing up. Cocke Countians who have apple trees on their properties may have some idea of their ages. Carver’s Orchard still has some of the original trees which Kyle Carver planted when he started the orchard in 1942. When asked about apple trees from the days when people lived in what is now the park, Danny Ray Carver said that the bears had destroyed all of them.

Another important aspect of raising apples for our forefathers was how to make them the most beneficial. Naturally a family could not just eat the apples; they had to be converted into other products — apple cider, apple vinegar, apple butter, apple brandy or dried apples. Some could be stored whole according to this process in the Knoxville Register in 1822: Gather them about noon in the latter part of September or beginning of October. Spread them in a chamber or garret [attic] where they remain till about the last of November. Then remove them into casks or boxes in the cellar. In this management you may keep them till the last of May, so well that not one in fifty will rot. A later article in Brown-low’s Knoxville Whig in 1850 suggested taking unblemished fruit, wiping each piece well with a cloth and placing them in a tight barrel with the bottom covered with a layer of dry pebbles. The pebbles were supposed to draw the moisture down. Because of its constant temperature, a cave also made an excellent place to store apples. M.G. Roberts wrote about the cave on his place.

The persons dealing with the apples would have known which varieties would have been the best “keepers.” I heard Mrs. Carver recommend a certain variety to a customer, saying that when she was a child, they would often still have some of those apples when school was out in the spring. Some readers may remember when apples, along with turnips and cabbage, were stored in the garden in a hole filled with straw or leaves, covered with dirt with planks on top to keep off the rain.

Apple trees and apples are like people. Some are sweet, some are tart and some are in-between. Some mature earlier than others. Some are more fruitful than others. They often-times operate on their own schedule. Some are well-formed and shiny, others dull and misshapen, but it’s what on the inside that counts.

Today apples are put mainly in two categories — eating or cooking, but in past days, people knew which apples were keepers, which made the best cider, pies, apple butter as well as the best dried apples.

The principle of drying apples was simple, minimal cost but labor intensive. The apples had to be peeled and sliced to the exact thickness. Then they were placed in the sun, covered with a thin cloth to keep off the bugs and left to dry. They had to be brought in at night and taken back out in the morning.

When dried, they were stored in cloth bags. If one had extra cash in 1883, a Fruit and Vegetable Dryer could be purchased from C.M. McClung in Knoxville. The #1, costing $40, could dry eight bushels in 24 hours, whereas the #2 could handle 16 bushels; it cost $75. That is about $1900 in today’s money. The estimate is that 4 bushels of apples will make one pound of dried apples. One bushel of apples contains about 45 pounds of apples.

Apples can also be preserved by placing apple slices in a basket, suspended in a barrel over burning sulfur. A quilt over the top of the barrel holds the fumes in. Once treated, the apples are stored just like any other dried apples. Any sulfur taste is removed when the apples are soaked for cooking.

When needed, the dried apples were stewed and then used in pies, fried pies, stack cakes or as applesauce. Even though they’re rather chewy, they don’t make such a bad snack.

They also were an excellent medium of exchange because they were already preserved and very salable in urban markets. For example, a farmer from Hall’s Top could carry his dried apples to the nearest store, perhaps Malcolm McNabb’s at Wilton Springs, where he could barter them for items he needed, maybe coffee, salt or cloth. When the merchant had a sufficient load of bartered products, he could haul them to Newport to sell to the nearest wholesaler.

In Newport’s Eastern Sentinel, December 8, 1881, the market report showed that dried apples were bringing 75 cents per pound and dried peaches $1.50 per pound. M.J. Mims, Depot Agent at Leadvale, reported in the Morristown Gazette, July 7, 1875, that in the fiscal year 1874-75, he had shipped out 413 pounds of dried fruit. An agent for the East Tennessee, Virginia and Georgia Railroad reported in the Knoxville Daily Press and Herald, September 3, 1875, that for the fiscal year, a total of 3,308,274 pounds of dried fruit had been shipped.