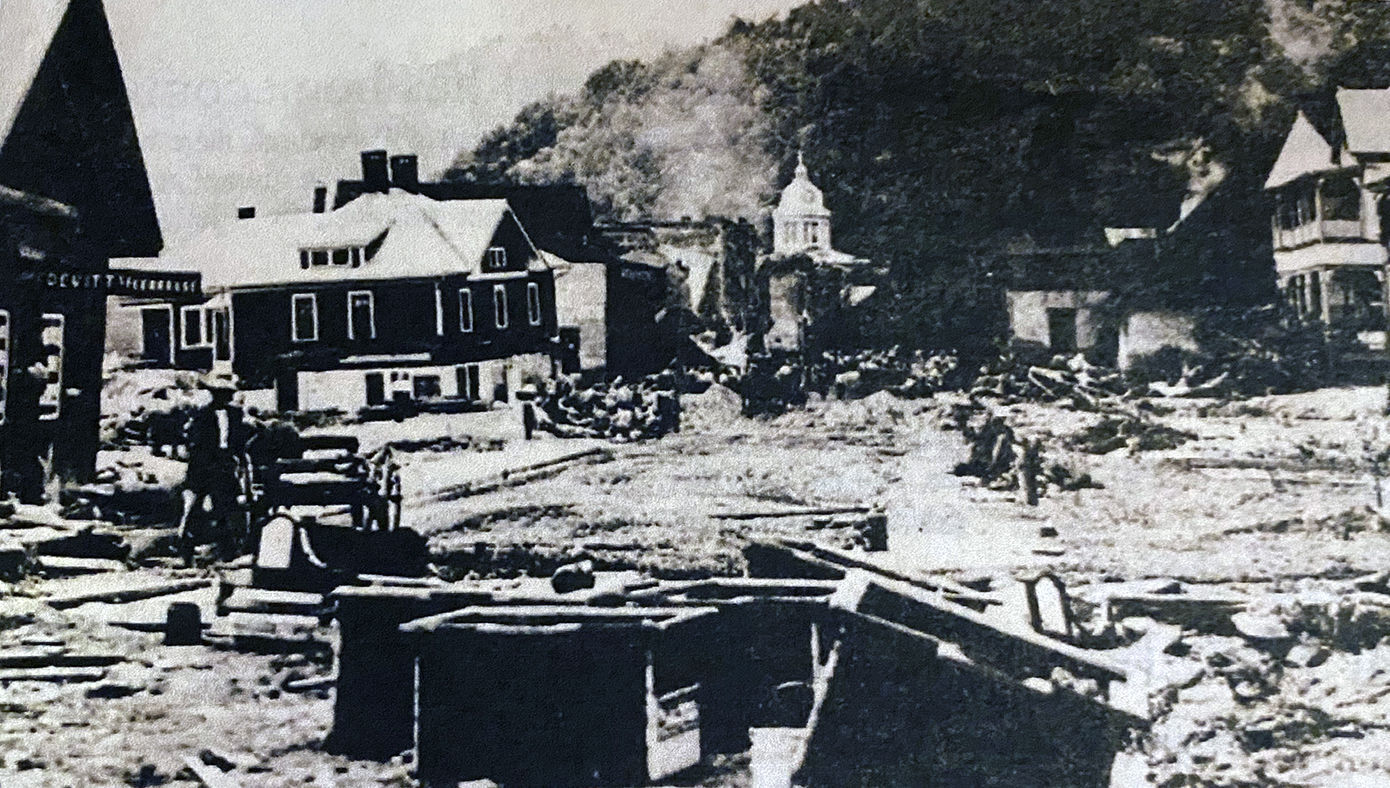 Downtown Marshall, NC after the flood of 1916. Visible in the distance is the Madison County courthouse. 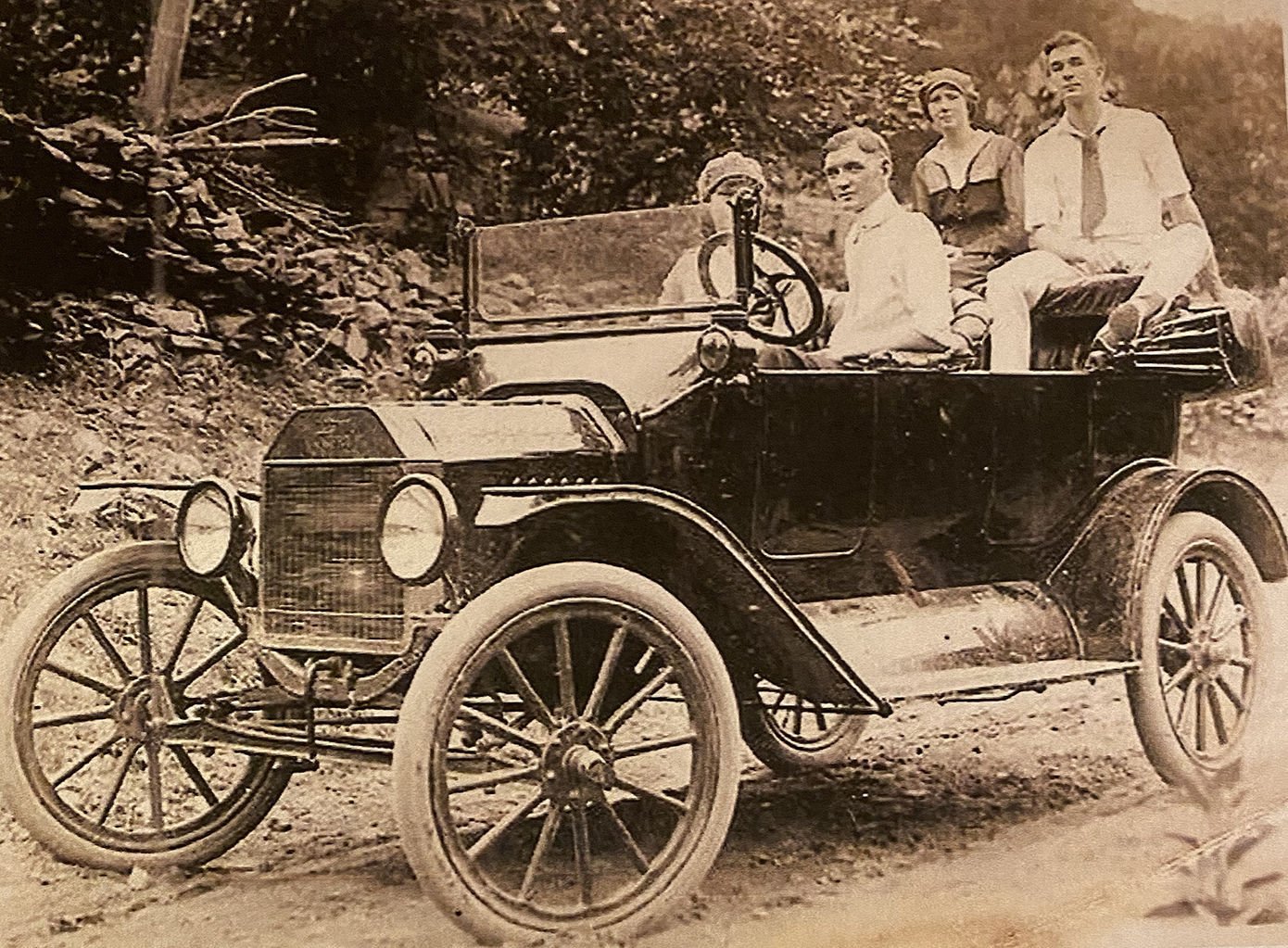 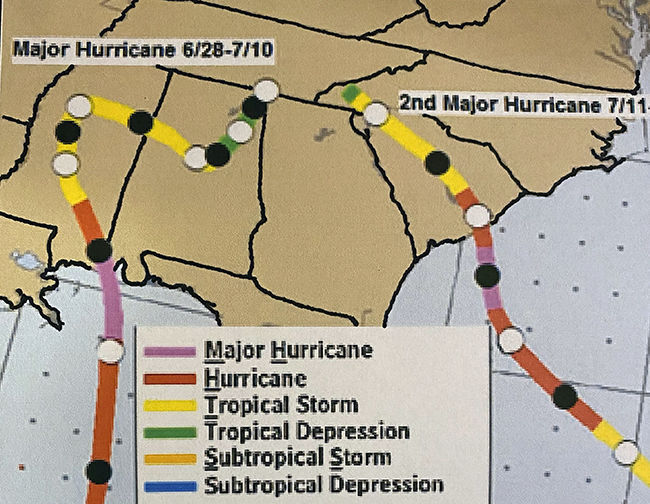 The National Weather Service map of the storm which caused the flood of 1916.

Downtown Marshall, NC after the flood of 1916. Visible in the distance is the Madison County courthouse.

The National Weather Service map of the storm which caused the flood of 1916.

This past week the United States was struck by two hurricanes nearly simultaneously: Marco and Laura, Called “twin storms,” they travelled parallel, both making landfall on the Texas/ Louisiana coast. In July 1916, Cocke County suffered from the flooding caused by two storms, one coming from the Gulf of Mexico, the other from the Atlantic.

Storms were named then as they are now. It wasn’t until 1953 that naming began. It was always feminine names until 1979 when the names were alternated masculine/feminine.

Storm #1 made landfall on July 5, 1916, near Gulfport, Mississippi, and in its circuitous path changed from a hurricane to a tropical storm, then a tropical depression, bringing heavy rains to the East Tennessee and Western North Carolina region on July 8-10. With today’s ratings, it would have been a Category 3 storm.

Storm #2 would be labelled a Category 2 today. It made landfall near Charleston, SC on July 14 and travelled NW across South Carolina, hitting an already soggy Western North Carolina on July 15 and 16 and dropping 22 inches of rain in a twenty-four hour period. There was a third storm that developed in the Atlantic right on the heels of #2. Even though it travelled up the coast to New England, meteorologists feel that it had influence on #2.

Unlike today, the people had little warning of the impending dangers. From the rains, there were at least 300 landslides. Many dams burst and bridges washed out. Homes were flooded or washed away. Roads and railroads heavily damaged.

The major flooding of the Swannanoa and French Broad Rivers struck Asheville on July 16. A one point the French Broad was a mile wide. Much of Asheville was underwater. The river crested at twenty-one feet, seventeen feet above flood stage. Damage was estimated at $21 million ($500 million by today’s rate) and there were at least 80 deaths. Although damage to the Biltmore estate was limited, Mrs. Vanderbilt herself took a major role in the rescue and recovery effort in the Asheville area.

In those times, railroads were the very lifeline of the country for personal travel and hauling freight. The railroads were impassable, but within 5-6 weeks, they were repaired and fully operational.

As all know, Cocke County was in a direct path of the flooding with the French Broad River, which bisects the center of the county. There are no existent local papers from July 1916 but some of the area papers reported the effects that the flooding had on this area. Newport itself was not affected, as the Big Pigeon rose only slightly, unlike it had in 1902. It was estimated that Cocke County’s damage totaled $50,000 (about $2 million today).

The northern end of the county is drained by the Nolachucky, and based on the recollections of the old timers, this flood set record heights for both the French Broad and the Nolachucky. The Morristown Republican, July 21, 1916, reported “the lower part of R.M. Jones’ house was flooded and his automobile “stored” in the middle of the bridge, the most convenient high place to the home when the flood came.” (Although a newer bridge is there now, this spot is on Hwy. 160 at Lowland.) Also, heavily damaged in that area were the Susong, Hale, Hogan, Inman and Felknor farms.

The following report was in the Knoxville Sentinel, July 18, 1916:

Sunday afternoon announcement was made that the French Broad River was out of banks and rapidly rising and by night the river had reached higher mark than was ever known at Old Town, two miles north of Newport. By 7 o’clock the water was touching the bottom of the bridge. Many barns and small houses all along the river have been washed away.

At Bridgeport the water was several feet in the floor of Maj, James Huff’s residence and his family has moved out. At Dutch Bottoms and in Harrison’s Bend the river was miles wide, at one place the expanse of water being nine miles. Mrs. Callie Nelson lost more than 600 bushels of wheat. A.C. Hampton lost his entire tomato crop and has cancelled orders for cans. Stokely brothers, the canners, have lost 100 acres of sugar corn.

A warehouse on the farm of Robert Birchfield, at Rankin, was washed over the railroad and a mile through his bottoms, lodging against the Leadvale bridge where it gradually beat itself to pieces. At Del Rio the families of M.N. Stokely and Stokely Runnion were forced to desert their homes. Thousands of feet of lumber and acid wood was [sic] washed away from Del Rio.

At Old Town, the ferry cable was broken and the bottoms of Thomas O’Dell were covered with water, destroying many acres of corn. Two men and a boy who had gone out into a bottom of Edom Robinson to watch the river were surrounded by water. One man swam out but the other man and boy remained in a tree all night and were rescued.

According to the Knoxville Journal and Tribune, July 17, 1916, the two who were caught in the trees were Dolph Morefield and his brothers. They stayed in the trees three hours until someone with a boat arrived. The Edom Robinson bottom is now part of the Graham farm.

In addition to the farm crops, the railroad damage was quite significant. Most readers are familiar with the railroad line through Cocke County and its proximity to the rivers. It is easy to visualize the damage rendered by the flooding. The track from Sinking Creek Creek bridge to Leadvale was damaged. At Rankin where the water was “sixteen feet deep, with on the tops of telegraph poles showing,” there were 200 men work repairing the line.

The track of the Southern railway on the Knoxville & Asheville division is being repaired as rapidly as possible. The line is now open one mile beyond Del Rio, but trains on that division are only running as far as Del Rio…. The large trestle washed out beyond Del Rio has been rebuilt and is now ready for use. The condition of the track is not definitely known. Service to Asheville will probably be established with in five to six days.

The bridge at Bridgeport was heavily damaged and it estimated that it would take a week to repair it. (Some readers will remember that steel bridge which was still usable, if you had the nerve, until the late 1970’s. When crossing one might think that no repairs had been done since 1916!) The bridge at Del Rio washed out on Sunday, July 16th. It was estimated that it would take three to four months to have it rebuilt.

A humorous story was told about the Del Rio bridge collapse. Harle Cole lived on the north side of the river. On that afternoon, he was on the south side. He was urged to get across the bridge before it fell but he didn’t. His girlfriend lived on that side and he knew if the bridge fell, it would be sometime before he’s get to see her. The bridge went down and Harle was able to see his girl (whom he married the next year).

There are today no eyewitnesses of the 1916 flood, but there are memories. W. Nathan Jones wrote is his memoir By the River and Beyond: I remember very distinctly the 1916 flood. On a Sunday afternoon, we received word of the raging French Broad…As we neared the river, the flood stopped us at the Burnett curve as we went north on what is now 107. The water had completely covered the bottomland where the furniture plant now stands…We walked across the hill at the Burnett house and stayed on high ground until we reached the village. The railroad was under water. The water was up to the second floors of the M.N. Stokely and Stokely Runnion houses…

Gray O’Neil recalled walking to “the High Top” on the back of his farm and from there they could see the flooded Dutch Bottoms. My grandmother was living in Dandridge at the time and she said it seemed as if everyone in town was there on the bluff overlooking the river.

My grandfather’s memory involved the aftermath of the flood. Sometime after the flood a couple drove into Newport in their Ford automobile. They were headed to Asheville but were fearful of driving across the mountain. As my grandfather was the Ford dealer, they asked him for advice. He offered to drive their car to Asheville and they boarded the train. The bridge at Hot Springs had washed out, and for some reason, there was no ferry. A fellow there, nailed planks across two skiffs, the automobile was driven onto the planks and the skiffs were pulled across the river. Safely across, he proceeded onto Asheville. (In those days, the trip from Newport to Asheville by car took more than five hours.)

Although there are still have floods on the French Broad, the TVA system thankful has lessened the damage with their flood control measures.

A documentary film on the 1916 flood in Western NC entitled “Come Hell or High Water” has been produced by David Weintraube.