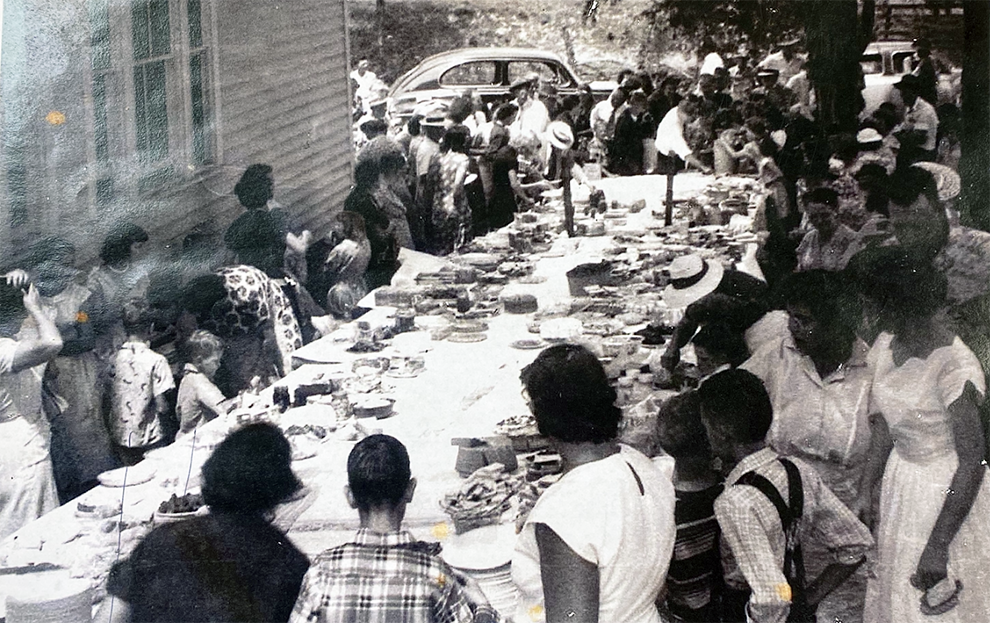 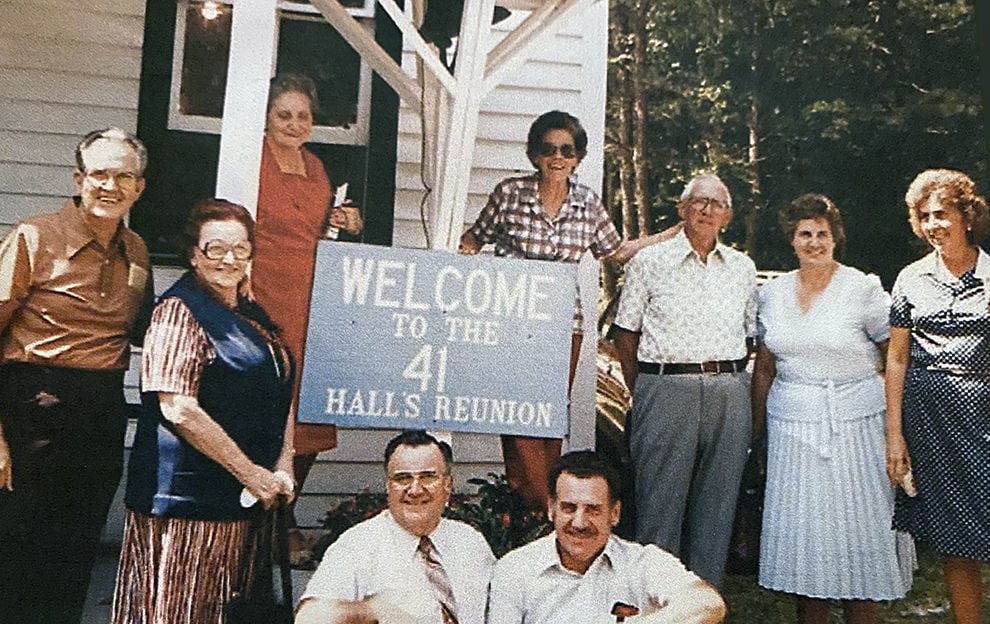 Children of “Singin’ Sam” Hall are pictured at the Hall Reunion in 1991. 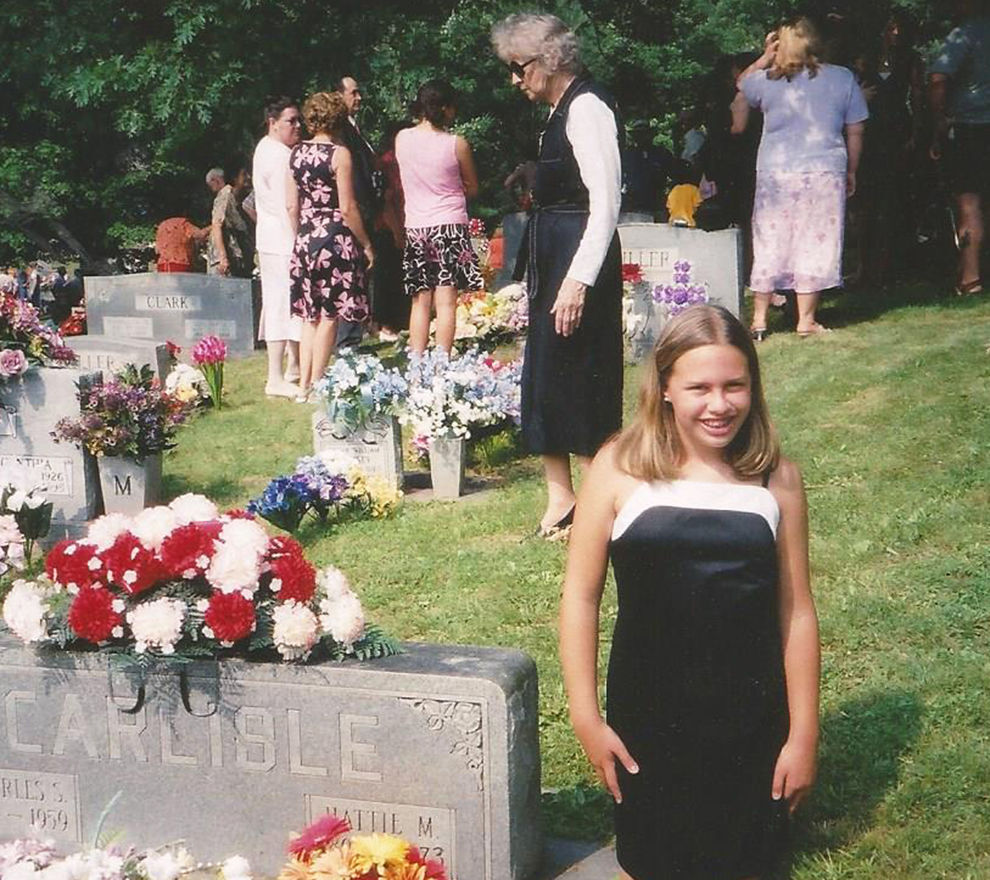 Caitlin Burchette is pictured at the Clark Cemetery decoration.

Children of “Singin’ Sam” Hall are pictured at the Hall Reunion in 1991.

Caitlin Burchette is pictured at the Clark Cemetery decoration.

“Summertime and the livin’ is easy” is the line of an old song. There might have been some folks who would have taken issue with George Gershwin when that song was released in 1935. Those of you who have known farm life can tell plenty of stories of hard work in the hot weather during the summer months. About the only thing easier at that time was having less wood to chop because the house did not have to be heated.

But then, summertime is often a time of gatherings — family reunions, homecomings and cemetery decorations. Three factors have made this so: better weather, the bounty of available food and easier traveling.

Today’s generation must remember that in earlier days, folks did not have the degree or frequency of contact that computers, cellphones and social media have made available now. Even if people had a telephone, long distance calls were only made on momentous or serious occasions. With family who lived away, contact was maintained via the postal service. “Lived away” could even mean another part of the county. I have a 1908 postcard from a lady in Newport sent to a lady in Edwina saying she could be coming up to visit on a certain day.

If you lived some distance away and wanted to visit with a member of your family or a friend, you had to travel and it would be convenient if you could see as many folks as possible on the same trip. A reunion was just the thing. Everyone could meet at a specified location on the same day and lots of ties could be renewed and enjoyed.

A reunion has a central focus — family, a school group or an organization. A church reunion has usually been called a homecoming, and as churches often had cemeteries adjacent, it was convenient to hold the homecomings at the same time as the decorations. The purpose for either is the same: seeing the most people at the same time.

A decoration is just that: an adornment of the graves of loved ones. Placing flowers on graves has been a practice for a long time, but setting aside a specific date to do so began in the post-Civil War era. The date was usually in the late spring when there was an abundance of flowers, but in some places crepe paper flowers were made.

It was also a time to clean up the cemetery. A few days before a crew would gather. If there was grass, it would be mowed; if not, the ground would be swept clear of winter’s debris — sticks, leaves, dead flowers — and any sunken graves filled or leaning tombstones straightened. A modern practice now is to have someone collecting money to defray the costs of the cemetery upkeep.

Sometimes a church’s decoration and its homecoming were held at different times. There were more flowers in the spring, but more fresh vegetables in the summer.

Another reason for having these events was that it was easier to travel in warmer weather and more suitable to visit outside. With the roads of today, it is hard to imagine road conditions as a deterrent for travel. Mrs. W.O. Mims told this example: traveling the distance from the present KOA Campground at Wilsonville to Camp Carson at the head of Carson Springs took about two hours in a wagon in the 1880’s; much of the journey was over the rocks in the creek bed.

Besides renewing ties, another consequence of a family reunion, a decoration or homecoming is the sharing of heritage, also known as telling the family stories. As the graves were visited, remembrances of the dead are recounted, along with the degrees of kinship, who was married to whom, who’s buried where (even if there isn’t a tombstone) and what should or should not have been put on the tombstone. Then there were the stories that were repeated in whispered tones. The heritage was passed down, at least to those who listened.

The dates for some of these events are often held inviolable. The Clark Cemetery Decoration is the second Sunday in June (The Carlisle family holds its reunion the same day, after they have been to the decoration.) At Parrottsville, Oven Creek Methodist Decoration is the last Sunday in May. The Hartsell Cemetery on Middle Creek has its decoration on the 3rd Sunday in May. There is a community decoration of Black, McGaha, Green-Rollins and Coggins Cemeteries at Grassy Fork on the 4th Sunday of May.

Family reunions used to be held at the “old home place” where some of the kinfolks still lived and the memories abounded. At those times some of the most important people there were those who had “come in” for the occasion. In days past, to “come in” just didn’t mean for a night or two. Families have stories of relatives who came for a visit and stayed for a month or more; the children often had to sleep on pallets or with several others in the same bed. The larger boys may have been sent to the barn. Sometimes the visitors helped with work to be done, sometimes not.

The oldest continual family gathering in Cocke County is probably the Hall Reunion which has been held at Bell Hill on the 4th Sunday of August since 1941. Many other families here hold reunions at various times. Some who have ties to the area that later became the Great Smoky Mountain National Park hold their reunions at the Cosby Campground. Modern times have brought families together at community buildings or church fellowship halls where there are kitchen and restroom facilities and no worries about the weather.

For posterity’s sake, another advantage of these gatherings was when there was a camera present and pictures were made, Sometimes a professional photographer was brought in, other times it was someone with a “Kodak” (for younger readers that was the term once used for a camera). It might be different family units or the entire group. Getting the entire group together wasn’t always easy, but years later aren’t we glad someone persisted in doing it?

Now we get to the important part of these gatherings — the food. It seems like the women all tried to do their utmost to bring their very best dishes. Preparations took several days and sometimes there were so many dishes that they were transported in a trunk. The meat was principally fried chicken or ham; beef wasn’t as easily available as it is now. It was summer so there would be the array of beans, corn, tomatoes, Irish potatoes, sweet potatoes, cabbage, cucumbers, beets and okra in as many forms possible. Add the pickles and relishes and don’t forget the desserts — pies and cobblers, cakes, cookies and puddings — all varieties, something to suit everyone’s taste.

I still remember two special dishes from an annual reunion on my mother’s side of the family: chicken and dumplings (which my mother never made because my father did not like it) and raspberry cobbler, quite a delicacy made from the lady’s own berries. The lady who made the chicken and dumplings later confided that one year she had made them with rabbit and no one noticed. (or commented!)

There have been different ways of serving the food. The term “dinner on the ground” literally meant that. Tablecloths or quilts were spread on the ground and the food set down. Tables could be made from planks and sawhorses. Individual families tended to keep their food together on one table so they could be sure to know who prepared what. Now food is usually all grouped together accordingly — meats, vegetables, salads, desserts. (Those in charge know how they want it!)

As reunions and homecomings involve people and all people have quirks, there will be issues. It has always been whispered to avoid certain cooks’ food because of a lack of cleanliness. One family had a sister-in-law who would not help at their reunions. She would bring her food and then join the men gathered under the trees, leaving the other women to do the work of organizing the food and cleaning up afterwards.

Another family had an aunt known for her white cake with white icing, but she made an issue of only cutting it herself that one niece said “I’d starve before I’d ask her for a piece!” Then there’d be the family with many members and they only bring one dish to add to the buffet. (An old rule was to bring one dish for every member of your family present.)

Such events require work, more for some than others, but they are enjoyed each year and next year’s gathering is looked forward to.