Heather Haley, Chief Meteorologist for WVLT News, recently visited with the students of Del Rio Elementary. Haley gave the students a behind the scenes look at news production and how she creates weather forecasts.

Heather Haley, Chief Meteorologist for WVLT News in Knoxville, stopped by to talk about television production and east Tennessee weather with students.

Haley, who works during the morning newscast, shared her routine and described the process of creating a forecast by looking at various weather models.

She gave students insight in to how she creates an educated guess based on past, present and future data sets.

Haley told students that she uses many of the things she learned in her childhood science classes in her job as a meteorologist.

She took time to answer all of the students’ questions about weather related phenomenon such as tornadoes, thunder and lightning, and hailstorms.

Haley said she enjoys speaking to students and hopes her talks help them better understand their classroom course material.

“I remember when I was a kid and the folks that came out to speak,” Haley said.

“I remember them being very polite and kind, and wanting to help me better understand. You never know when you’re going to spark an interest in a child.

“With math and science, the subjects can be something that some gravitate to and others are turned off by them. You never know what might help them better grasp the concept and be more interested and excited about it. I hope I make it seem more fun and exciting while hopefully making class a little easier for them.”

Haley said it’s important for every child to follow their dreams or pursue a path that is of great interest to them.

She hopes each child has an anything is possible mentality.

Lori Blanchard, teacher at Del Rio, contacted Haley about speaking to the school.

She said there is a concerted effort at the school to encourage students to pursue STEM related careers.

“I contacted Heather in an effort to encourage our students to pursue careers in science, technology, engineering and math,” Blanchard said.

“We were so excited when she said she would be more than happy to share the details of her job with us.”

Members of the weather and news team at WVLT often visit local schools in the area to talk about their careers with students.

Any school that would like to have an individual speak to their students can reach out to the station at wvlt.news@wvlt-tv.com.

Alex Miller will perform at the Rustic Cow Entertainment and Event Center this Saturday night at 7 p.m. The 18-year-old just recently graduated high school, but is already making waves in the country music industry.

NEWPORT—On Saturday night the Rustic Cow Entertainment and Event Center will play host to an up and coming artists who hopes to carry the torch of traditional country music.

Many will remember Alex Miller from his appearance on season 19 on American Idol. Since leaving the show, the 18-year-old has skyrocketed to success and signed his first record deal with Billy Jam Records.

He calls the entire experience a complete whirlwind.

“A lot of people don’t get doors opened like this for them all the time,” Miller said.

“I feel like I’ve been lucky to get to play in shows and go to places that I’ve always wanted to go. American Idol has allowed me to do that and it’s definitely been a whirlwind of an experience, but I’ll never forget it and always be grateful for it.”

The Lancaster, Kentucky native just recently graduated high school, but has already been privileged enough to share the stage with some of greatest country artist to ever perform in the genre. This summer alone Miller performed at five state fairs opening for artists and groups like Hank, Jr., Josh Turner, Lee Bryce, Rhonda Vincent and Shenandoah.

“I got to play a show with Hank, Jr. and that was an incredible experience,” Miller said.

“I got to open for Josh Turner as well, and it’s kind of funny because he was one of my heroes growing up as a kid. It’s weird meeting these people that I’ve looked up to and looking at them as peers instead of celebrities.”

Miller is currently working on finishing his first album filled with original material.

The process of becoming a singer-songwriter versus a cover artist has been an interesting transition for Miller.

“It’ nice to be able to do music that you have a connection with personally. It’s not that I don’t have a connection to cover songs, but it’s nice to have something that I’ve played a part in creating and that I can be proud of.”

Miller encourages everyone to come out to Saturday’s show that starts at 7 p.m.

He said the performance would feature country favorites, bluegrass and almost everything in between.

“If folks like country music, and that means anything from bluegrass to almost rock and roll, then we play it all and like to have fun doing it,” Miller said.

“Right now I’m doing some cover material, but also working in some originals. If you want to see something brand new and fresh that’s a different take on country music, then I would definitely come out and see the show.”

Miller’s jam-packed schedule will continue throughout the fall and winter months. He will be performing in several Christmas shows later this year with Rhonda Vincent in Branson, Missouri. He also has several shows planned closer to how to finisher out the year.

Miller is active on all forms of social media, but especially on TikTok and Facebook. The best way to find him on any platform is @amillermusic.

For touring and album information, fans can visit alexmillercountry.com.

The Rustic Cow’s “Live At The RC” showcases national touring artists in a multi-purpose event venue with state of the art sound and lighting that gives a big city feel with hometown hospitality. Live At The RC is managed by The RC Foundation and produced by the SCAgency.

Big Creek Bluegrass will take the stage at the annual Grassy Fork/Hartford Fall Festival on Sunday, Oct. 17 at 2 p.m.

The event is sponsored by the Grassy Fork Volunteer Fire Department, which serves both communities.

The festival will feature crafts, food, antiques, music and specialty items. It will be held at Smoky Mountain River Rat Rafting, located at 3630 Hartford Road.

On Saturday, the Jeep Jam will be held with the Show and Shine starting at 10 a.m. Festival-goers will have the opportunity to vote on their favorite Jeep.

Shortly after the show, the Jeep Jam ride will be held which takes a quick tour of the area. The ride will end back at the festival. The price is $20 for each Jeep that participates in the event.

On Sunday at 2 p.m. Big Creek Bluegrass will take the stage for a live performance. The local group plays mostly bluegrass, but also covers country, gospel and rock classics.

Booth space is still available for those who wish to participate in the festival. You can contact Angie Hall by email at angiehall0172@yahoo.com, or Tonya Ochs at tonya.ochs@gmail.com to register today.

One day booth price is $25 and $50 will cover both days. Vendors of all types are welcome.

All proceeds from the event will go to benefit the Grassy Fork VFD.

COCKE COUNTY—Active COVID-19 cases in the county have fallen back under 300, down to 271 as of October 11. In the last seven days, 152 new cases have been reported.

There have been 135 total hospitalizations reported due to the disease. Eleven new COVID-19 cases were reported on October 11.

Over the last seven days, the county has averaged 75.7 tests per day, with an average positive percentage of 13.2%.

In Cocke County, there have been 34,230 doses of the COVID vaccine administered.

Over 49% of the county’s residents have received their first dose, and just below 45% of the population is fully vaccinated.

The following is a list of surrounding counties showing their total COVID-19 count compared to active cases, as well as their population percentage that has received at least one dose versus percent fully vaccinated:

As of October 11, there had been 6.99 million doses of the COVID-19 vaccine administered across the state to 3.64 million Tennesseans. Over 53% of the population has received one dose and 47.3% of the state is fully vaccinated.

The CDC reported 106,296 new COVID cases nationwide on October 9, which brings the total to 44.2 million cases since the onset of the pandemic.

There have been 487 million doses of the COVID-19 vaccine administered across the country to just fewer than 217 million Americans. More than 187 million people, or about 56.4% of the population, are fully vaccinated. That total includes 84% of Americans age 65 or older.

According to CCS Transportation Supervisor Chris Norton, the district has been struggling to fill these spots since the beginning of the year.

“Even with new hires, positions often remain open. We’ve had two bus drivers pass away this year,” he added.

Norton shared that, because of the shortage, the district has had to utilize substitute drivers regularly. Additionally, when drivers are short, the district is sometimes forced to rely on drivers “doubling routes,” or having drivers complete their regular route before driving back to the schools to pick up and drive a second busload of students.

Norton said that anyone interested in driving for Cocke County Schools can come to the Transportation Office at 255 Bailey Street in Newport, or they can call the office at (423) 623-2757. Norton has also been present at several local job fairs in an effort to fill the positions. 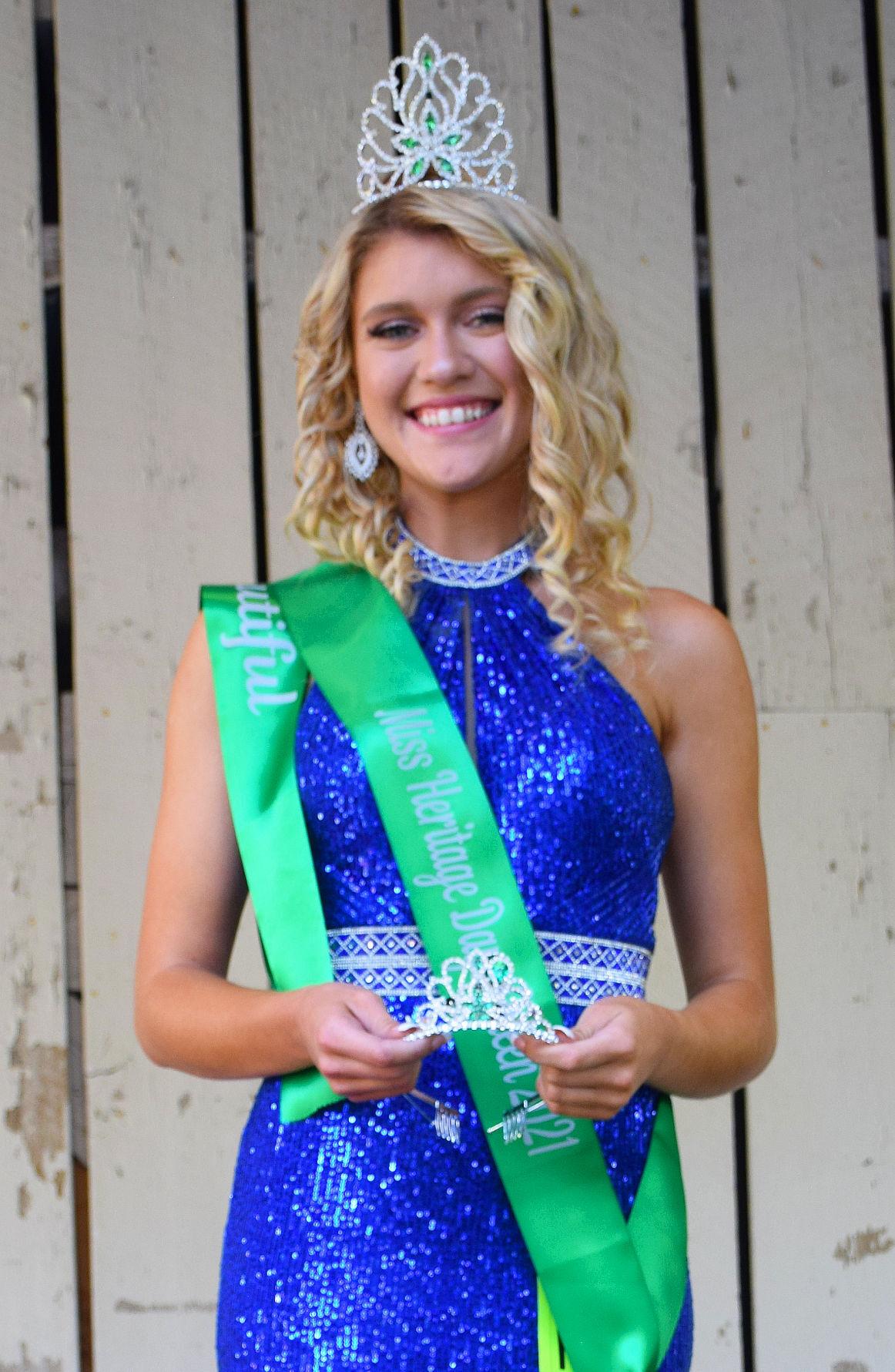 Alexis Cureton was crown Miss Heritage Days Queen on Saturday as the Town of Parrottsville celebrated its annual fall festival. Cureton also took home the title in 2019. The 2020 event, like many others, was canceled due to COVID.

Click and hold your mouse button on the page to select the area you wish to save or print. You can click and drag the clipping box to move it or click and drag in the bottom right corner to resize it. When you're happy with your selection, click the checkmark icon next to the clipping area to continue.