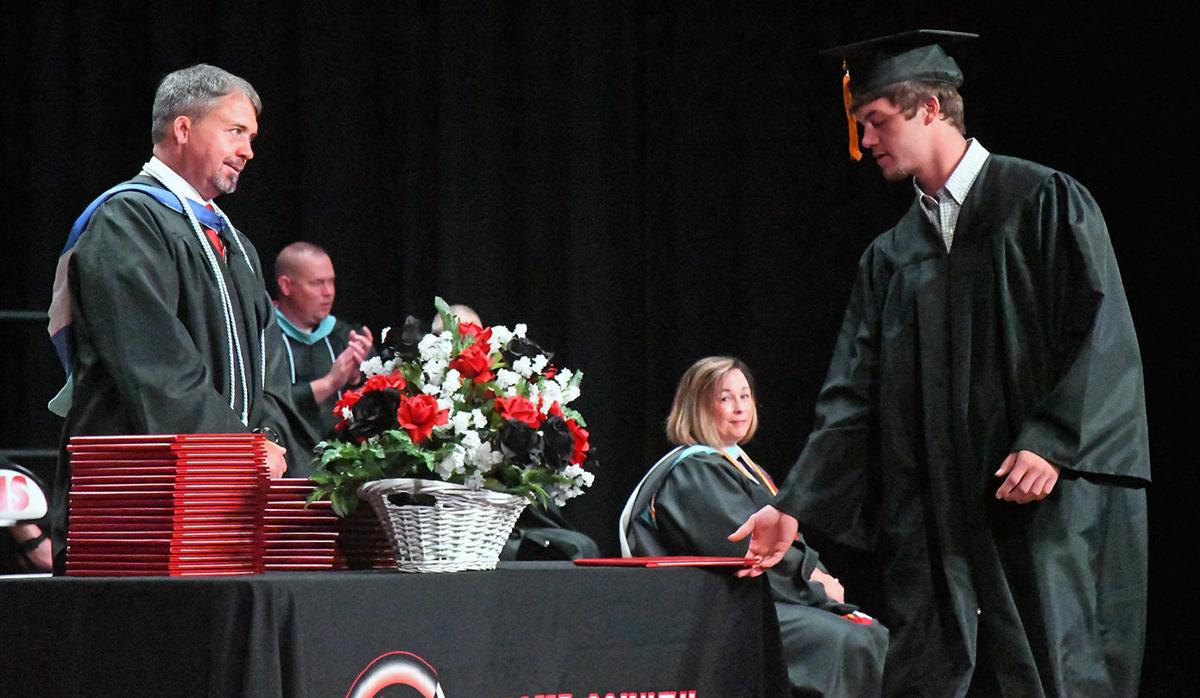 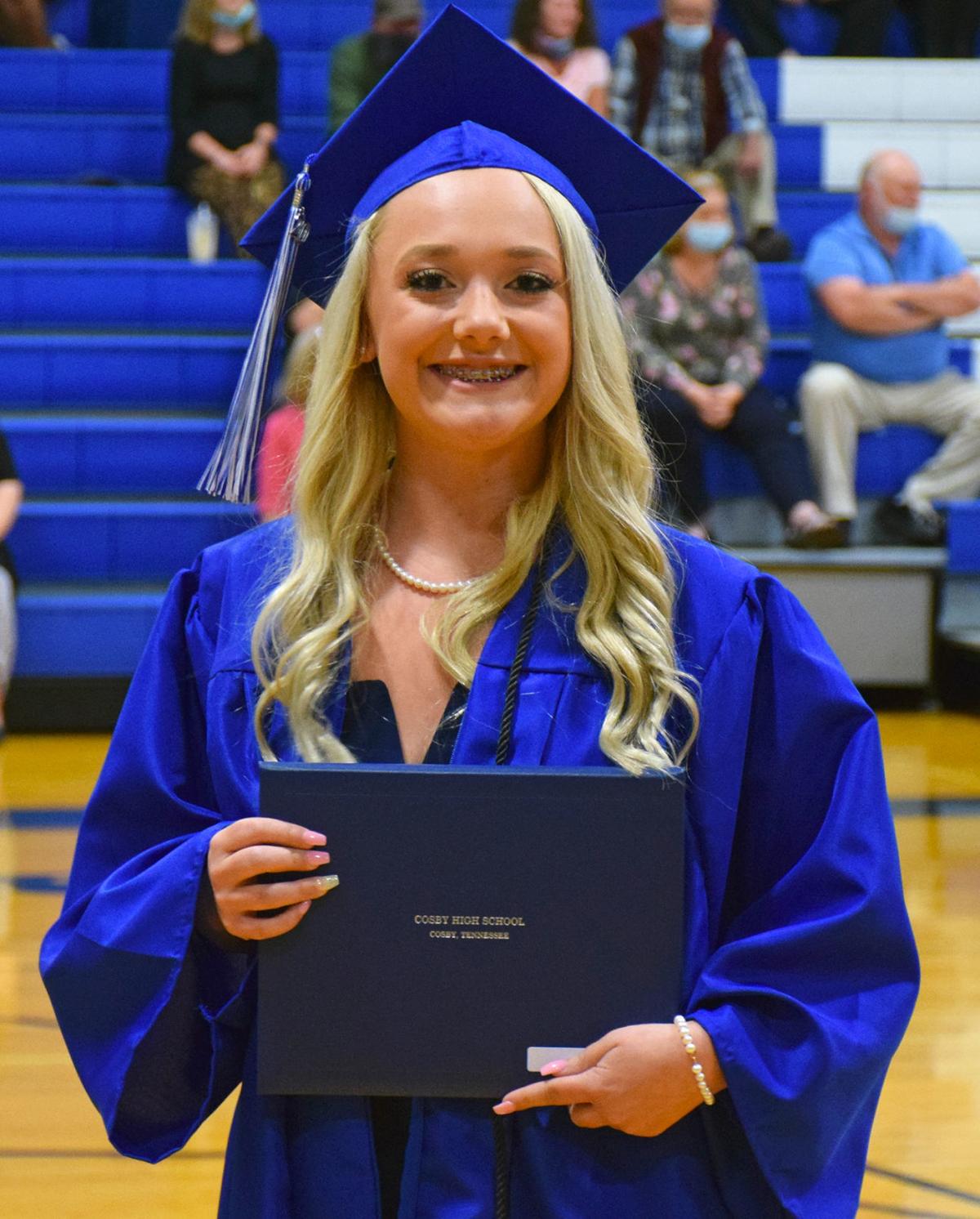 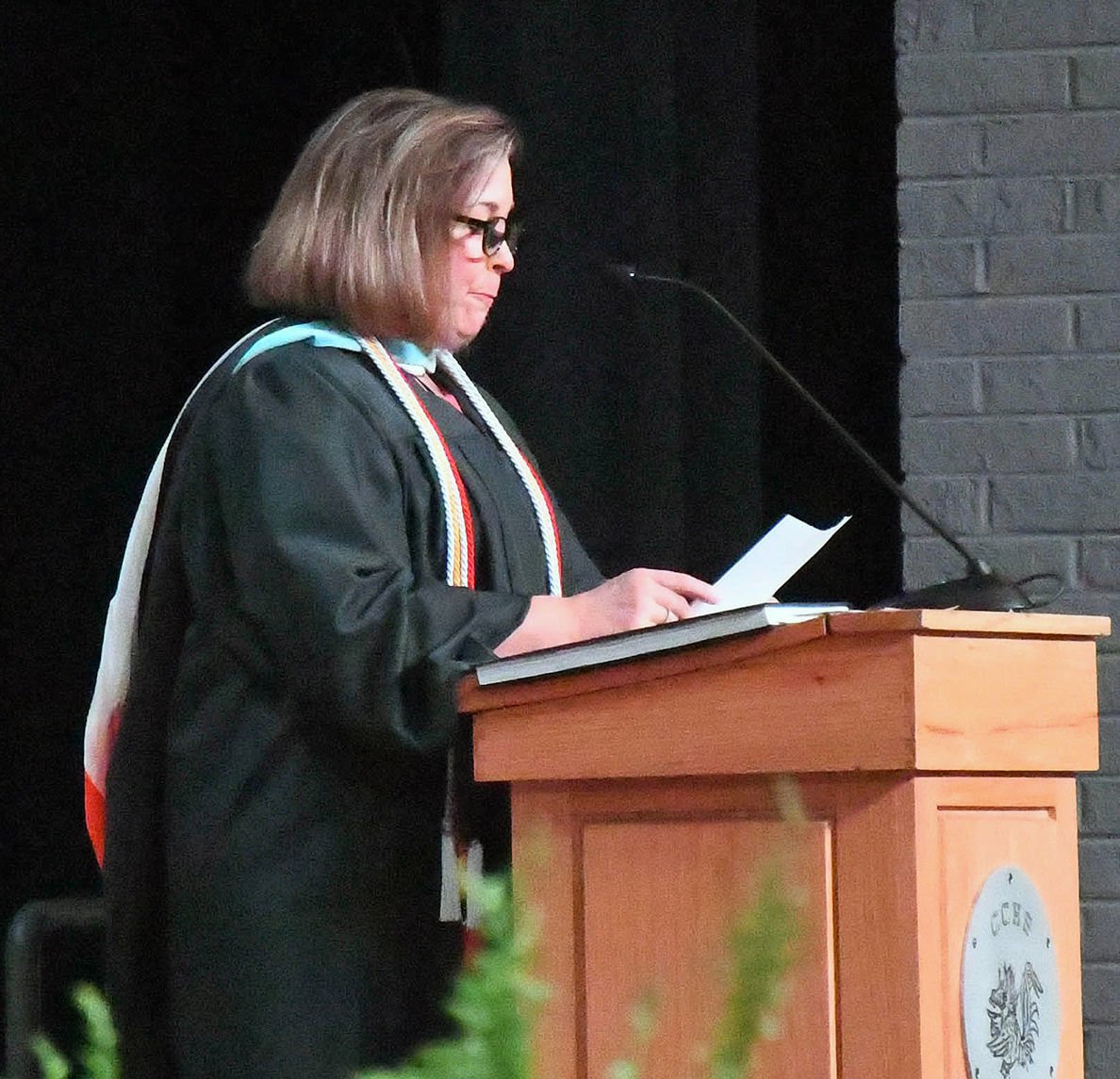 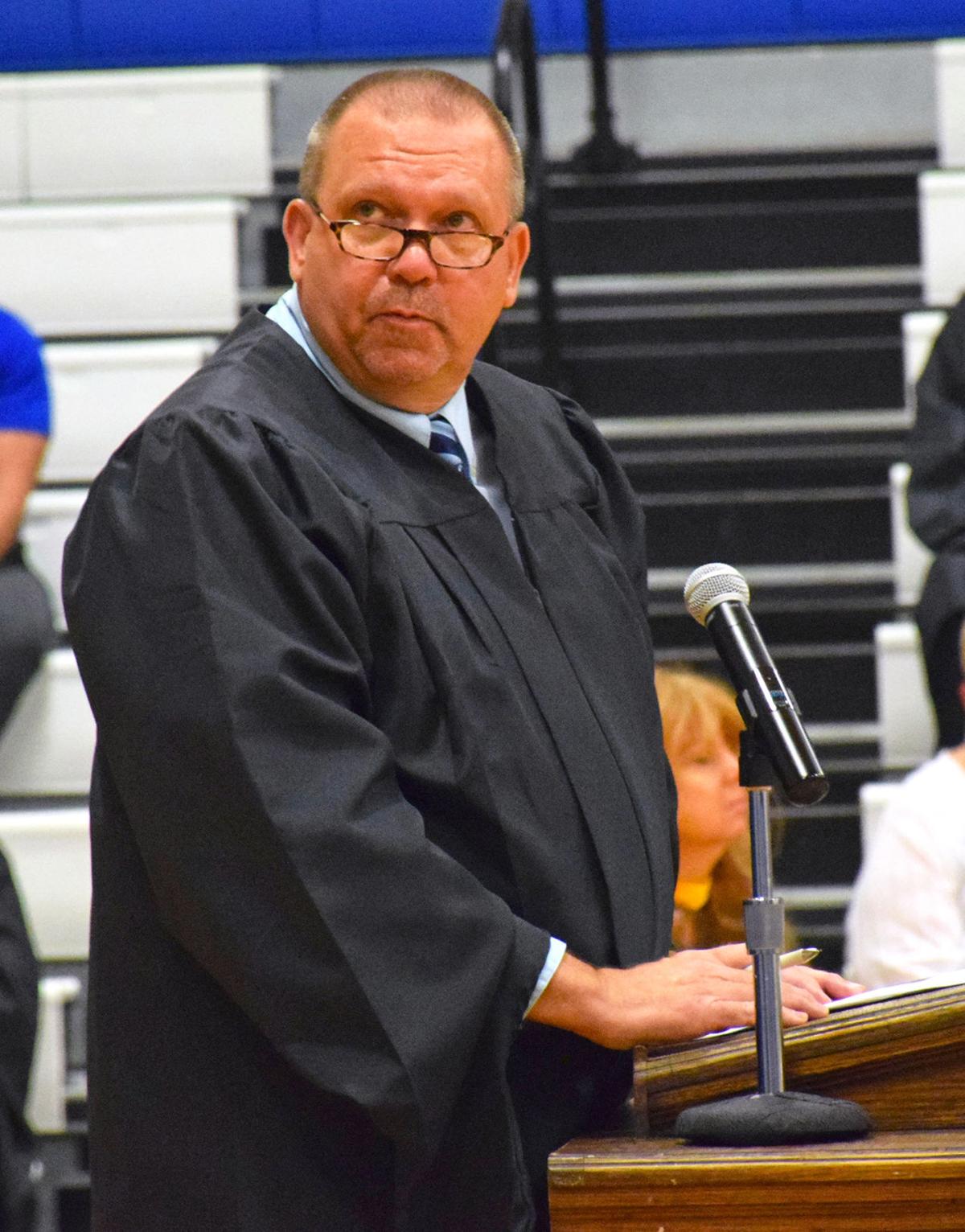 CHS Principal Patrick O’Neil took time to recognize the County School Board members in attendance for Cosby’s graduation ceremonies on Friday, May 22. The event was broken up into three separate ceremonies to allow for social distancing. See more photos in The Plain Talk’s graduation edition that will be out this Thursday.

CHS Principal Patrick O’Neil took time to recognize the County School Board members in attendance for Cosby’s graduation ceremonies on Friday, May 22. The event was broken up into three separate ceremonies to allow for social distancing. See more photos in The Plain Talk’s graduation edition that will be out this Thursday.

COCKE COUNTY—Diploma covers placed on the table for a student to pick up.

Twenty-five students at a time in 10 short ceremonies

Guests shuttled through holding areas throughout the school.

The 102nd commencement exercises for Cocke County High School were unlike any others in the school’s history.

But school leadership and administrators put together the closest thing to normal in times like these that are impacted by the COVID-19 Pandemic.

“We thank you for your patience in dealing with today and we are glad that you’re here,” Cocke County High principal Gail Burchette told attendees at one of the 10 different ceremonies put together by the school on Saturday. “A few weeks ago, we didn’t think a day like today would be possible, but with students giving us feedback they wanted a ceremony as close to normal as possible, and the thumbs up from local leaders, we were able to put together this for the students.”

The school scheduled 10 small ceremonies, beginning at 10 a.m. and continuing throughout the day until the last student crossed the stage just after 2:30 p.m.

Students and families were shuttled through different holding areas in the schools to help maintain social distancing and each area was sanitized thoroughly between groups.

Each graduation ceremony was held in the school’s recently renovated auditorium. Four guests per student were ushered into the auditorium and then students were brought into the facility to begin the ceremony.

After a short welcome by Burchette, each of the schools four assistant principals called the names of the students who walked across the stage. In lieu of usually receiving their diplomas and a handshake from Director of Schools Manney Moore, graduates instead picked up a diploma cover which Moore placed on a table.

As quickly as the students entered, they left the auditorium to receive diploma packets and out of the building, to help make room for the incoming guests and graduates.

On Friday night members of the Cosby class of 2020 gathered in three separate groups to hold commencement ceremonies.

Teachers, faculty, family and friends gathered all while social distancing to celebrate the groups accomplishments during the shortened school year.

Cosby High School principal Patrick O’Neil welcomed those in attendance before each graduate was recognized.

O’Neil said the class of 2020 will be remembered for the Coronavirus pandemic, but it will not reflect on the education they received in their final year at Cosby High School.

“I would like to thank Director of Schools Manney Moore and the County School Board for their leadership and help in making this possible,” O’Neil said.

“The class of 2020 will be known by many names. You’ve been called the pandemic class, even the class that graduates with masks, but have no doubt you are educated and prepared. Know that you are leaving here college and career ready.”

Members of the school board were in attendance to show their support for the graduates.

Each student picked up their diploma and stopped for a photo to commemorate the occasion.

The students will receive a DVD copy of the ceremony to go along with the photos some time this summer.

The ceremonies marked the official end of the school year, which has been halted since March 16. The system initially canceled classes for a two-week period and then announced a closure until late April. Shortly after, however, the decision was made at the state level to end the school year.

While these ceremonies were anything but normal, they were commencements that was held in person, as other districts have elected to hold virtual events. Several other East Tennessee school districts have voted for late summer graduations in hopes of holding a normal event, if social distancing guidelines are able to be relaxed.

The ceremonies were streamed online via YouTube. The videoed event can be viewed on the school systems YouTube page. Included in the recorded event are the usual addresses by school leadership and the valedictorian and salutatorians.