Many of the Red Regiment‘s events and competitions were canceled last year due to COVID-19. Band members, directors and parents worked diligently to keep the music playing with recorded concerts and outdoor performances like the Newport Christmas Parade. 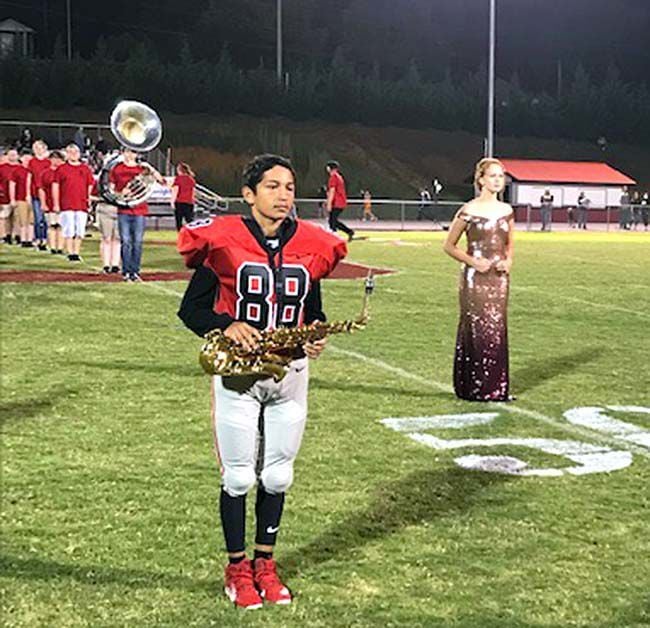 Billy Osornio, CCHS Red Regiment member, is also a football player. He joined his fellow band mates for half time performances during the home football games. At right is Mikayla Alley, drum major for the Red Regiment.

Many of the Red Regiment‘s events and competitions were canceled last year due to COVID-19. Band members, directors and parents worked diligently to keep the music playing with recorded concerts and outdoor performances like the Newport Christmas Parade.

Billy Osornio, CCHS Red Regiment member, is also a football player. He joined his fellow band mates for half time performances during the home football games. At right is Mikayla Alley, drum major for the Red Regiment.

NEWPORT—The COVID-19 pandemic has disrupted lives and group activities all over the globe, but the CCHS Red Regiment Band members, directors and parents have done everything possible to keep the music playing this past summer and fall.

The normal spring band routine was abruptly disrupted last March due to the pandemic. That resulted in no spring concert and no awards banquet. Not wanting to deprive the Senior class of 2020 a chance to be together one more time and to receive their awards, the band directors got together and arranged for a safe gathering at the Rustic Cow for the Seniors and their parents.

Band Camp was held in July as usual but with the added precautions of taking temperatures upon arrival, distancing as much as possible and wearing masks when indoors. Band camp involves two weeks of learning to march and of putting the halftime show on the field in preparation for the usual fall performances.

This year the directors decided to do a crowd pleasing football game type of show instead of the competitive show that the band typically performs in the fall. Once again because of the pandemic, there were no band competitions held and the band did not attend away football games.

The halftime show this fall was in honor of the working class and it opened with the Dolly Parton hit, “Nine to Five.” The second number was “Allentown” by Billy Joel, performed in memory of Chris Sotelo, longtime brass instructor for CCHS and husband of director, Kathy Sotelo. Chris passed away suddenly in May of 2020 due to cardiac arrest.

The closing number was a fun Jimmy Buffet tune, “Cheeseburger in Paradise,” which involved the audience in the hand clapping section! Although there were no competitions to attend, the members of the Red Regiment worked diligently to perform the show to the best of their abilities. Drum major for the marching band was Mikayla Alley with Hailie Brickey as assistant. Percussion captain was Victoria Smith and color guard captains were Emma Talley and Cierra Bailey.

Next up after marching season ended was the Veterans Day performance. CCHS was unable to have their usual wonderful program in the gym to honor veterans, but the band and choir both recorded music in a concert setting so the veterans could enjoy a virtual concert. Since they had a little more time to prepare this year, the concert band tackled two difficult selections including the Carmen Dragon arrangement of “America the Beautiful,” and the Bob Lowden arrangement of “Armed Forces Salute.”

The Christmas concert for both the concert and jazz bands was recorded also as the cases of COVID continued to rise in the county. The final product was posted on YouTube for everyone to enjoy. The jazz band performed a fun piece called “Santa’s Crazy Dance Party” and the concert band members presented a variety of familiar Christmas songs in a small ensemble format.

The marching band was able to march in the Newport Christmas Parade as usual since it is an outdoor activity. The band performed the classic “Frosty the Snowman” and the color guard was right in sync with their parade routine.

Directors of the CCHS Red Regiment are Kathy Sotelo, Travis Hicks and Neil Graves. The directors along with the Band Booster organization, have tentatively been planning spring events including a spring concert band performance and the jazz show for this year, “Sweet Sounds of Jazz.” The CCHS Winterguard, under the direction of Ashlyn Neas-McCaul and Hannah Palmer, has been practicing diligently in preparation for the upcoming competition season. Although the pandemic has altered the normal mode of operation for the Red Regiment Band Program, creative planning and the cooperation of everyone involved have combined to keep the music playing.