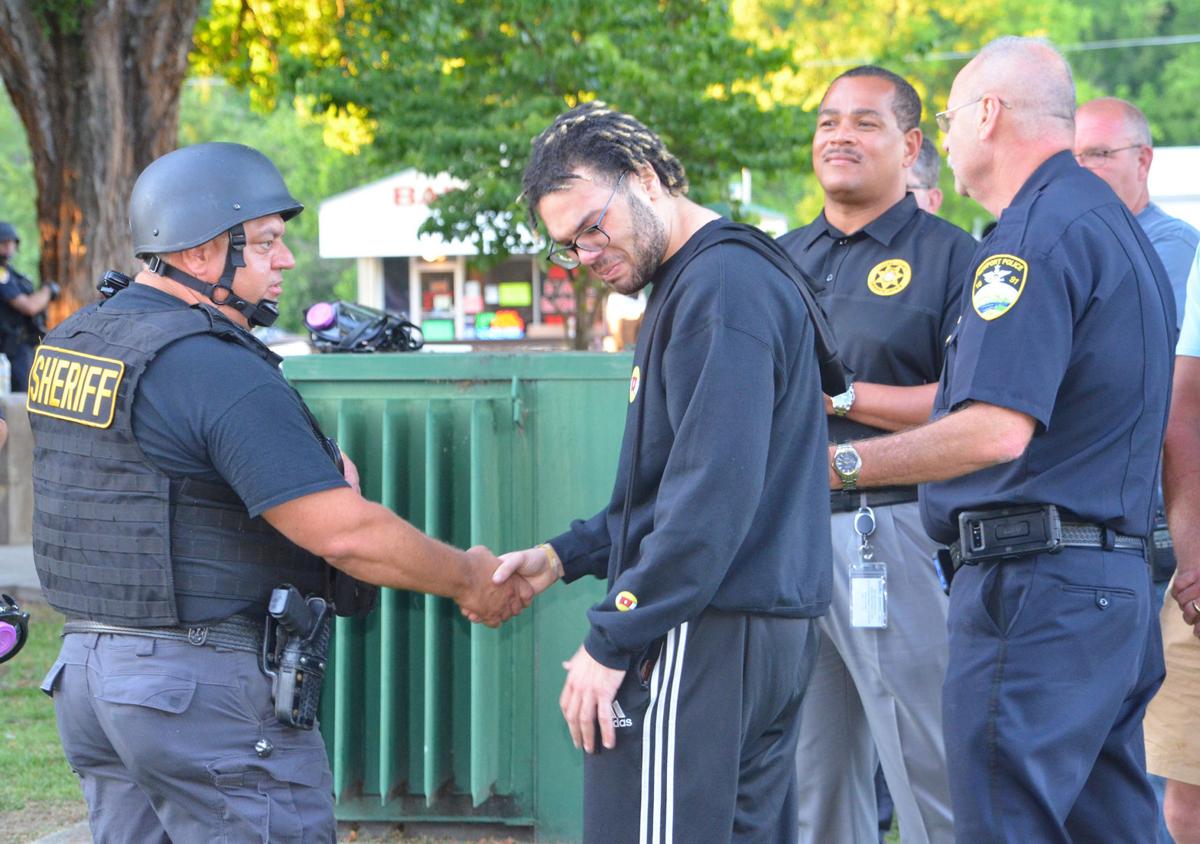 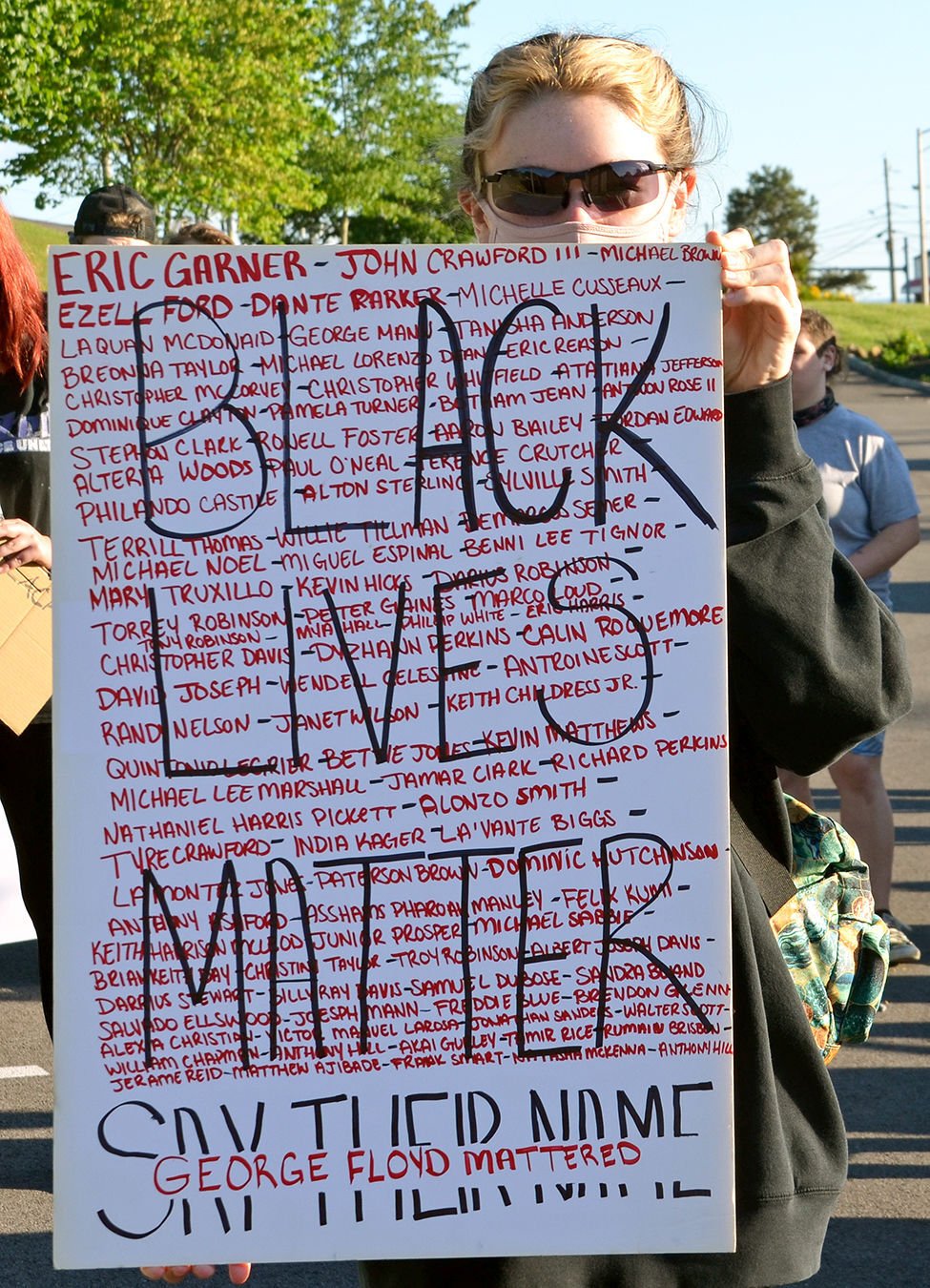 Rachel Cupp holds a sign that has the names of dozens of African Americans who have been killed in law enforcement incidents across the country. Over the names you can see the words Black Lives Matter. 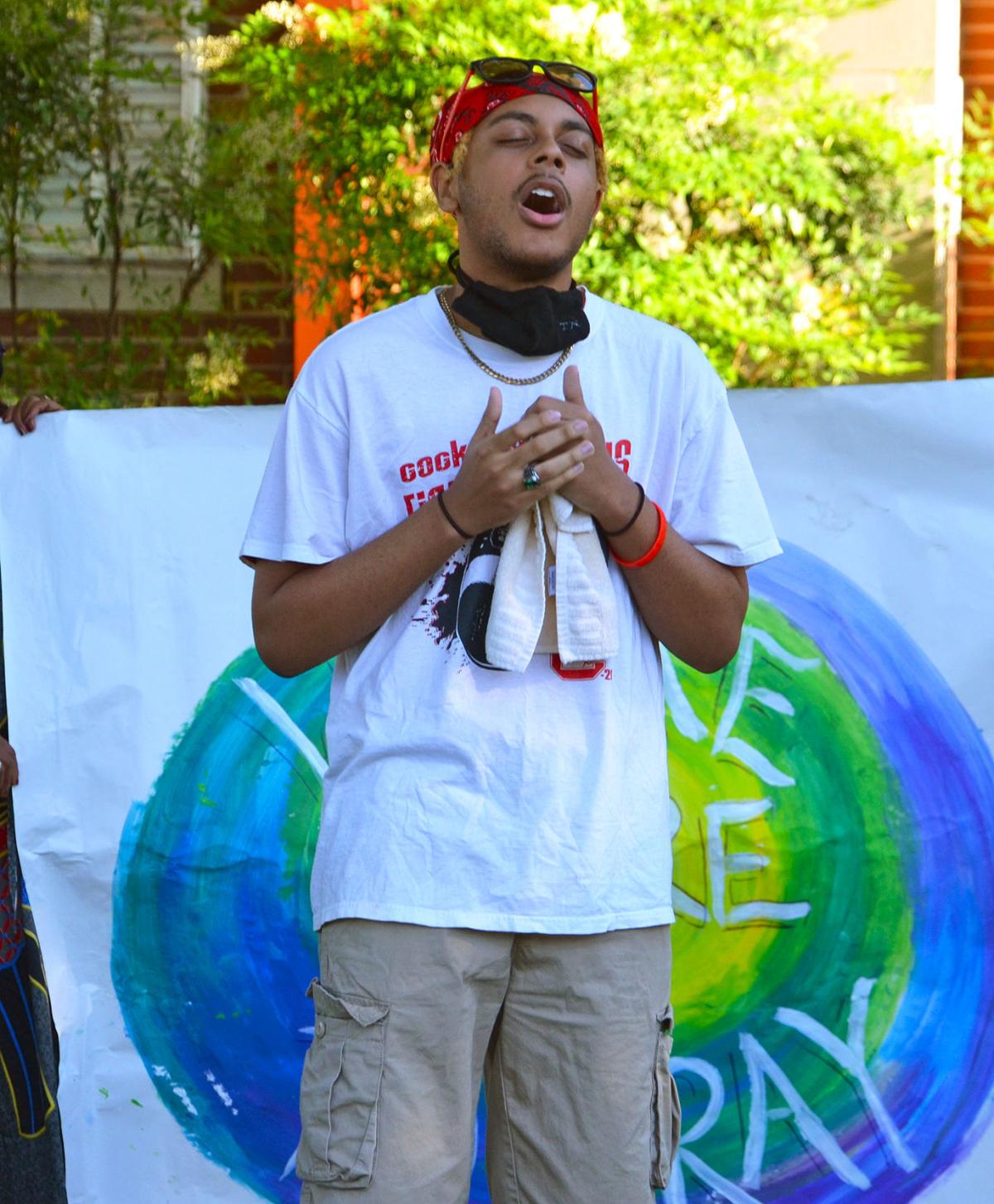 Donte Belton sang a song of peace during a gathering at the courthouse Monday evening. The large group met to pray for our nation during this difficult time. See more photos on page 6A.

Rachel Cupp holds a sign that has the names of dozens of African Americans who have been killed in law enforcement incidents across the country. Over the names you can see the words Black Lives Matter.

Donte Belton sang a song of peace during a gathering at the courthouse Monday evening. The large group met to pray for our nation during this difficult time. See more photos on page 6A.

NEWPORT—The words “No Justice, No Peace” and “End Police Brutality” were chanted throughout the city of Newport on Monday, but by the end of the protest law enforcement officials and demonstrators came together, traded handshakes and listened as people shared testimonies.

Close to 50 young adults marched from the Newport Community Center to the Cocke County Courthouse at 7:30 p.m. Monday night. By the time they arrived at the courthouse there were nearly 150 bystanders waiting and watching as protesters continued to chant.

Demonstrators were escorted during their march by the Newport Police Department and Cocke County Sheriff’s Office.

Demonstrators protested racial inequality and police brutality. The protest centered around the May 25 death of George Floyd, an African-American male who when former Minneapolis police officer Derek Chauvin kneeled on his neck for nearly nine minutes while in custody.

Newport Chief of Police Maurice Shults reported no violence occurred during the protest.

“We did see a couple of counter protestors.” Shults stated. “I truly appreciate the Sheriff, his staff, the officers of the Newport Police Department as well as all of our law enforcement partners from around the area.”

“We are grateful for the support of our city and mayors and the administrations of Newport and Cocke County, Cocke County E-911 Director Nancy Hansel and the staff of radio communicators. I am also thankful to Joe Esway and the Cocke County EMA.” Shults stated.

“We also want to thank all of the emergency personnel (Newport Fire Dept. Cocke County Fire Department, Cosby, Grassy Fork and Centerview Volunteer Fire Departments, the Newport Rescue Squad and First Call EMS) that were either by our side or on standby.”

Before the protest began, another group of people gathered at the Cocke County Courthouse to pray for our community.

“We’re fortunate to live in a community where we can have a prayer gathering to pray, sing, support and love on the same evening a peaceful demonstration is held to allow people to express the views important to them.” Cocke County Mayor Crystal Ottinger stated.

Sheriff Armando Fontes expressed some of the same sentiment as the county mayor saying thanking everyone for the part they played in maintaining a peaceful protest.

I want to thank Chief Maurice Shults, Cocke County Emergency Management director Joe Esway and all city and county officials for a well planned and well executed protective detail that ensured the safety of all persons who attended last nights events,” Fontes said.

Thank you to the law enforcement agencies who provided resources and manpower. I want to especially thank the huge crowd of people who arrived prior to the scheduled protest who prayed for our community, and nation. Their songs, prayers and statements reflected the true heart of our community.

”We thank those persons who were part of the protest that expressed respect toward law enforcement and who worked to maintain a peaceful protest and assembly.”