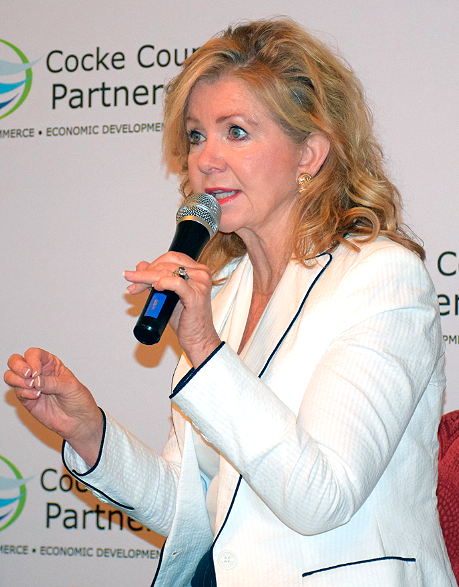 Sen. Marsha Blackburn is currently visiting counties across the state. On Friday morning she made a stop in Newport and participated in a “Coffee Talk” event hosted by the Cocke County Partnership. 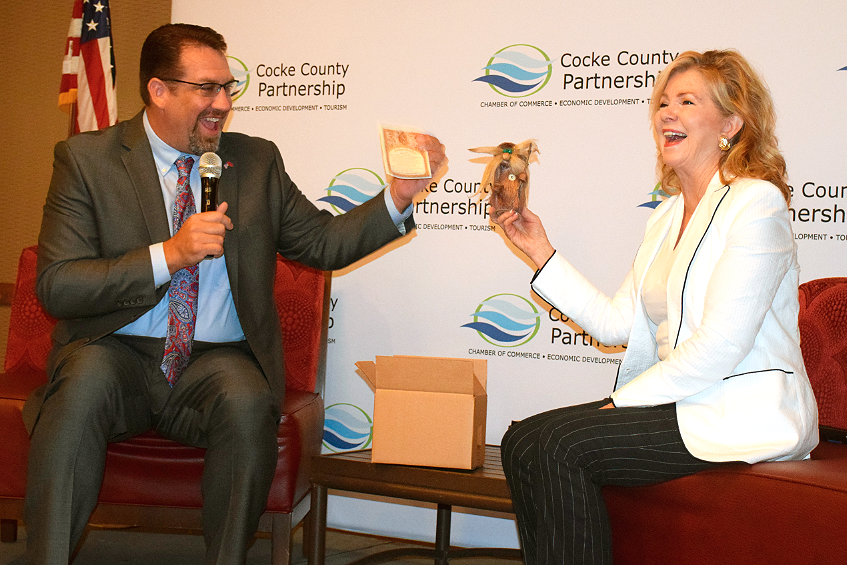 Rep. Jeremy Faison presented Sen. Marsha Blackburn a troll doll in honor of her visit to Cocke County on Friday. The senator said the troll would be proudly displayed on the shelf in her office.

Sen. Marsha Blackburn is currently visiting counties across the state. On Friday morning she made a stop in Newport and participated in a “Coffee Talk” event hosted by the Cocke County Partnership.

Rep. Jeremy Faison presented Sen. Marsha Blackburn a troll doll in honor of her visit to Cocke County on Friday. The senator said the troll would be proudly displayed on the shelf in her office.

NEWPORT— U.S. Senator Marsha Blackburn was greeted by a large crowd at Best Western in Newport Friday morning, where she enjoyed a cup of coffee and a chat with Cocke County’s citizens.

The first question asked to Blackburn centered on health care in rural America and how access can be increased.

Blackburn said the issue needs to be addressed at the state and local levels.

“Addressing access to health care will take all of us working together,” Blackburn said. “One thing that would be a huge help would be to block grant Medicaid back to the states.

“Local representatives would work with local providers to design a Medicaid network within the state. A resolution has been passed by the state asking Washington, D.C. for permission to handle delivery of health care. It’s the right step and I am fully in support of the governor in this effort.”

Blackburn has also worked to bring health care into communities that have experienced hospital closures.

Her Rural Health Care Agenda involves three specific pieces of legislation. It creates a rural health corps to bring health care professionals into an underserved area. It incentivizes participation from medical schools, and brings interns and residents into rural Tennessee.

The second portion of the bill is the health care innovation fund that provides grants to local communities that have no access to health care. The funds can be used to bring care in the form of free standing emergency rooms. It can also be used to modify health departments so that an emergency center can be attached to the facility.

The final piece of legislation involves across state line telemedicine. It coincides with the local emergency center allowing them to access the nearest trauma center for assistance.

The second topic discussed by Blackburn was the depletion of Social Security and Medicare funds. She said those funds were used for a variety of things, which included support of the Affordable Care Act.

“This is your money and these are trust funds that need to be stabilized,” Blackburn said. “So many sticky fingers have gotten into that pot now there is less money for the people that put it there. The Obama administration took $700 billion from Medicare and put it into Obama Care.

“The money needs to be put back. That was the taxpayer’s money and it was there for their Medicare and Social Security that was coming back to them.”

Blackburn also mentioned the decrease in the workforce as more individuals reach retirement age. Decades ago there were 40 workers to every one retiree, but now that number is closer to 2-1.

Blackburn has visited the border regularly for the past 10 years. She said that immigration issues are not a new problem.

The explosion in illegal crossings has created a crisis in her eyes.

“Currently we are projected to see over one million illegals come into the United States through the southern border this year. The numbers started to decrease in July, but at this point we have a 900,000 case backlog to process for people claiming asylum.

“Our illegal immigration office in Memphis has a 20,000 case backlog. When people come in and claim asylum they are processed and moved on. This is why the border patrol continues to say we need a barrier, more technology and more officers, agents, and judges to handle this process.”

Blackburn blames human trafficking by the Mexican cartels for the increase in border crossings. Families from dozens of countries pay the cartels for transportation to the border, where they cross and claim they are seeking asylum.

Blackburn said that until we secure the border every town is a border town, and every state is a border state.

Blackburn said she is greatly impacted by mass shootings just like every other citizen. She said that in many instances mental health plays a part in the equation.

The senator agreed that no one wants a weapon in the hands of an individual that wants to do harm to themselves or others.

“I’m like all of you. Sometimes it feels like you can’t breath when you read about these shootings or see footage. We have to realize that these are mental health issues many times.

“I have talked to so many health care professionals and law enforcement officials and they all say we don’t have enough beds or facilities for the severely mentally ill. None of us want someone with a severe mental illness to have a gun.”

Blackburn noted that Senator Lindsey Graham of South Carolina is working on grants that will be provided to the states so they can better legislate and address mental health issues.

Those efforts will strive to keep members of the public safer in their communities.

Rep. Faison thanked Sen. Blackburn for visiting Cocke County, and he shared some kind words about the work she has done across her political career.

He said she hasn’t changed her beliefs or values since day one.

“When it comes to politics we can be frustrated with people, but one thing that I have always found that is impressive to me is when someone is consistent,” Faison said.

“I am so proud of Senator Marsha Blackburn for being consistent on the side of conservative values and limited government. She has not been changed, she has not been bought or manipulated by anybody.”

To honor her visit, Faison presented Blackburn a Troll, which is made at the Five Arts Studio in Cosby.

Blackburn encouraged everyone to sign on to her email list through the blackburn.senate.gov site. Those that sign up will receive a news letter every Friday afternoon that talks about the happenings in D.C., and how they impact the state and local levels.

You can leave comments through the senator’s site as well.

The “Coffee Talk” event was hosted by the Cocke County Partnership.

Several elected officials from the city and county government were in attendance as well as local business and community leaders.