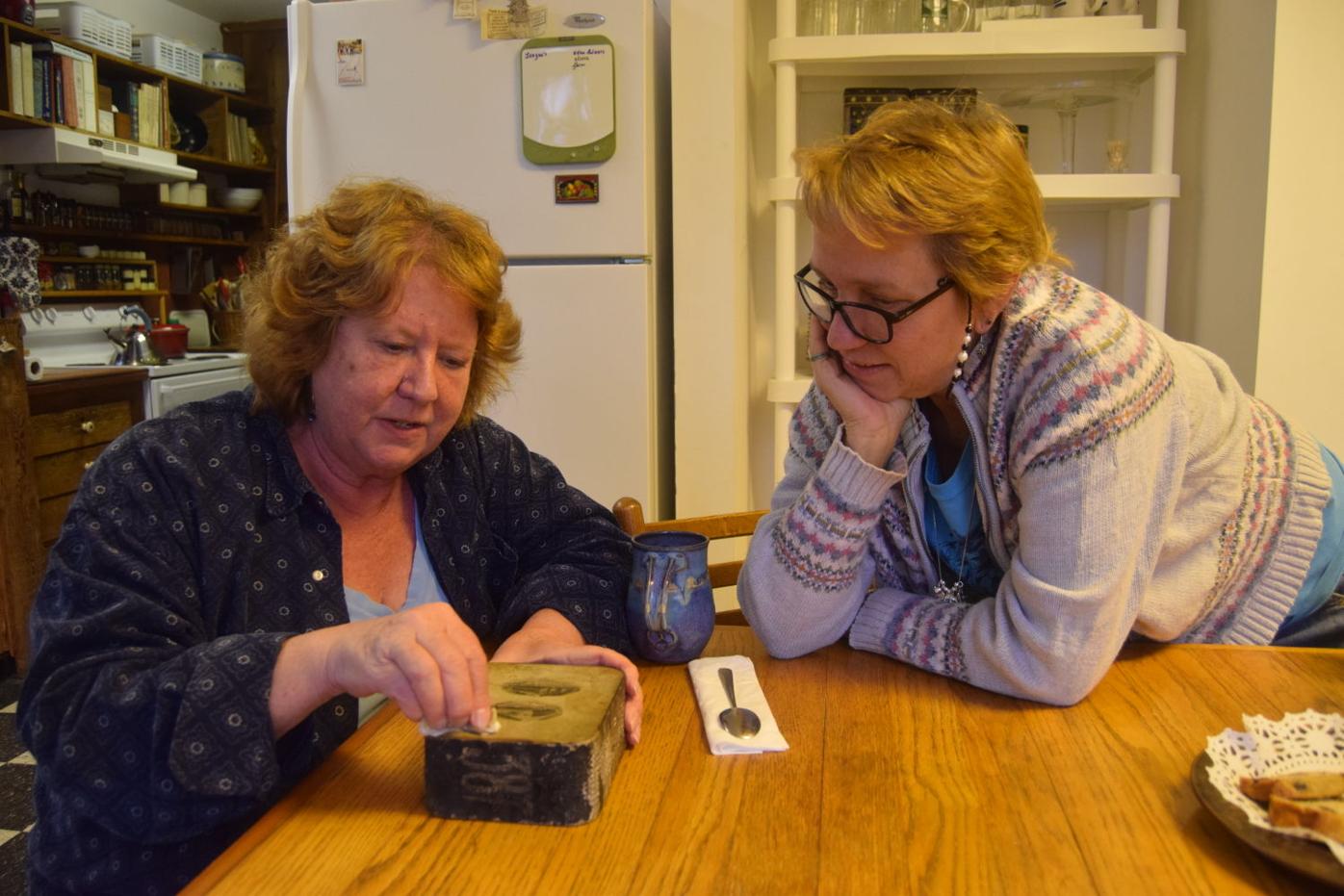 Marianna Shaffer, left, and Vivi Arensbak, examine a large stone etched by their father, Ken, who served in the Danish Resistance during Nazi Germany’s occupation of Denmark. 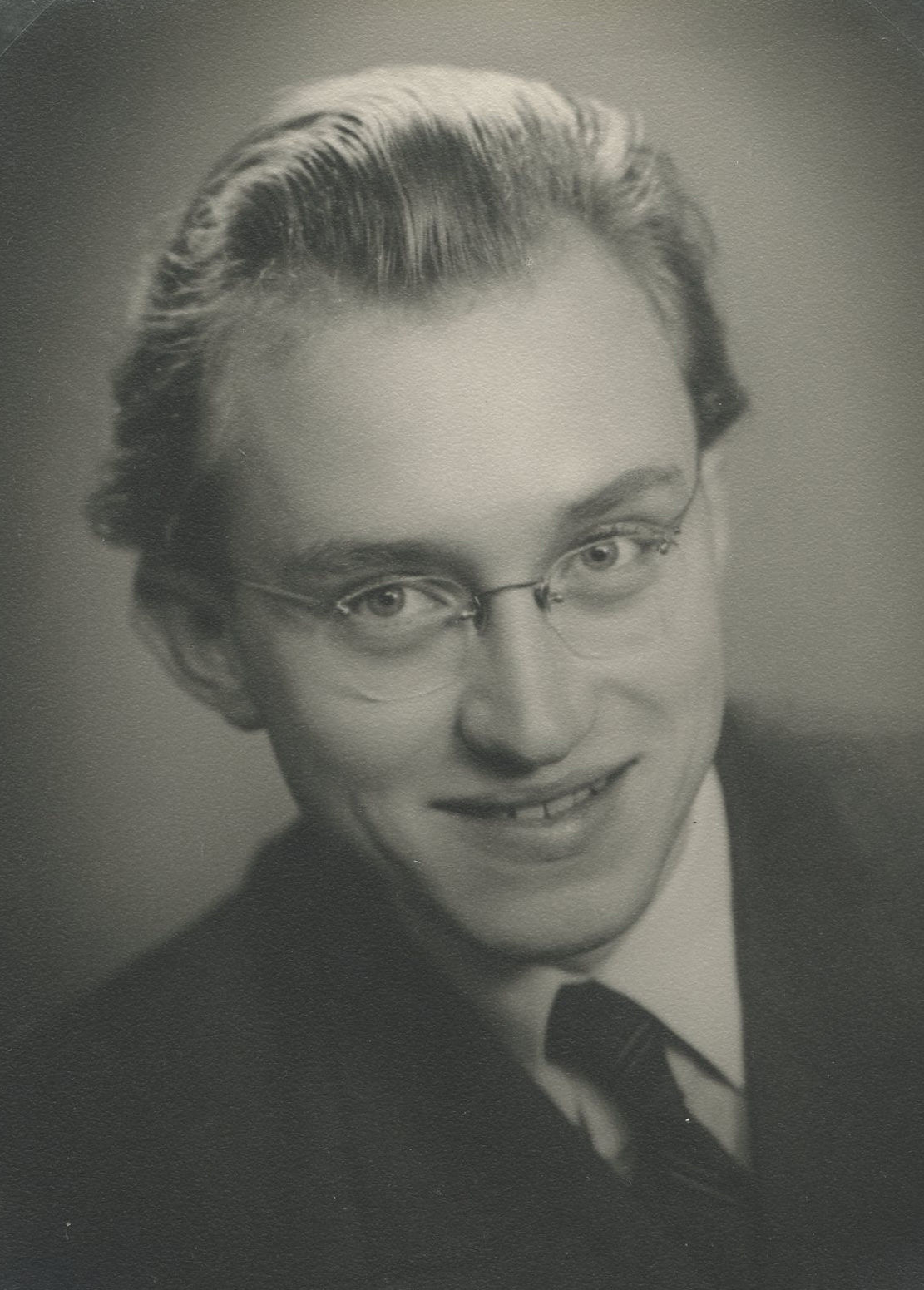 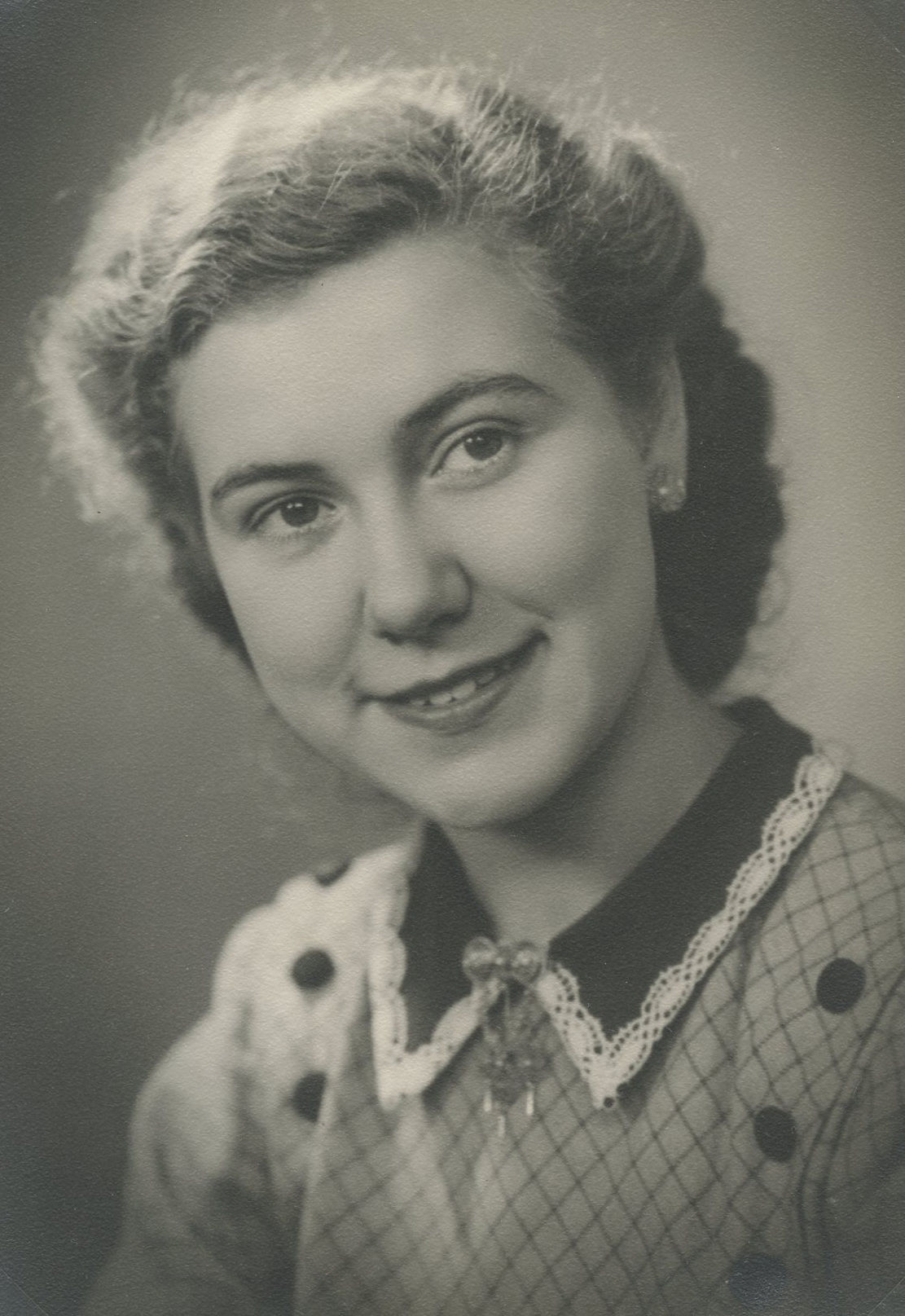 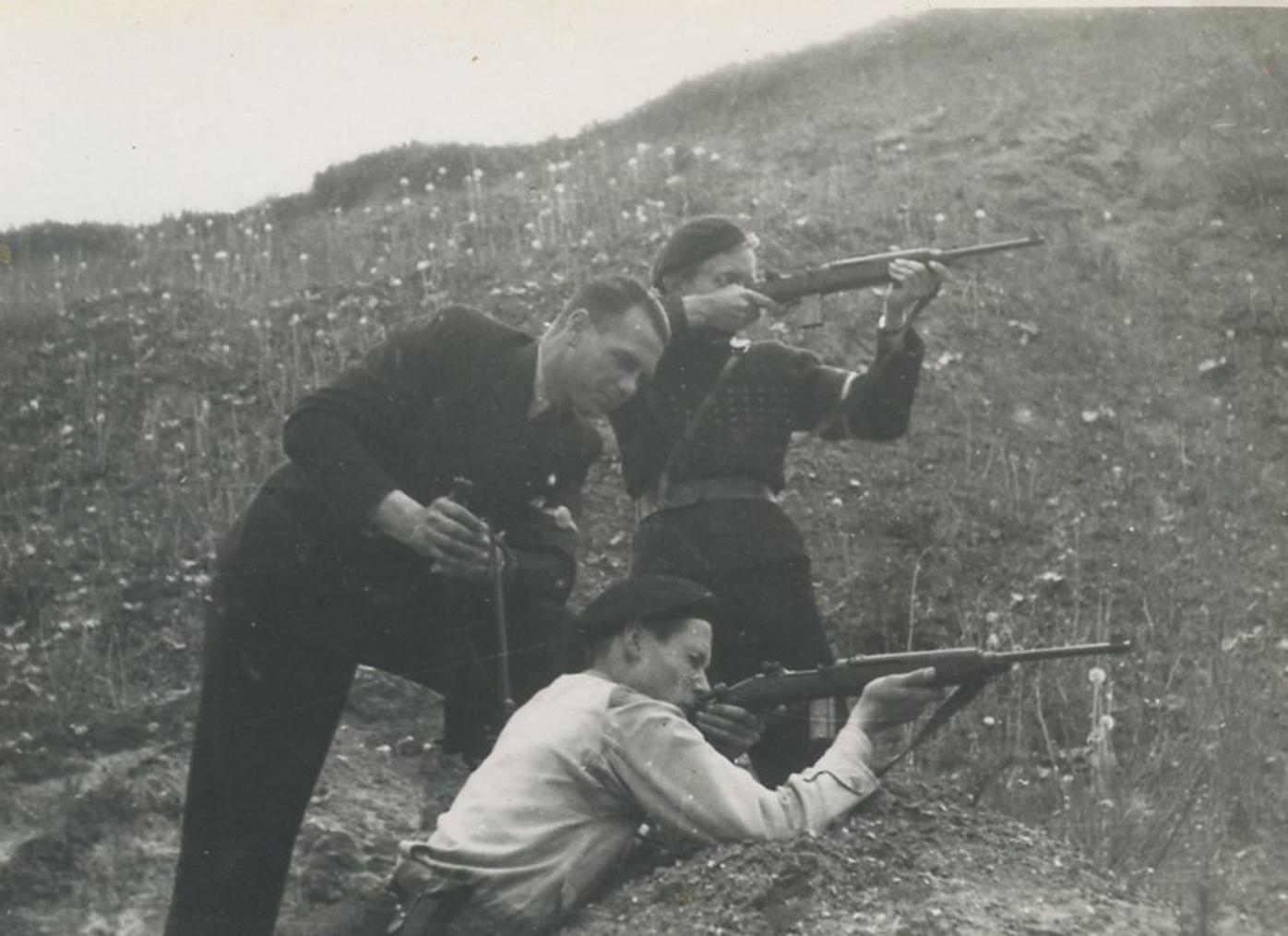 Ken Arensbak, top center, is shown training to shoot as he became a vital part in the Danish resistance in World War II.

Marianna Shaffer, left, and Vivi Arensbak, examine a large stone etched by their father, Ken, who served in the Danish Resistance during Nazi Germany’s occupation of Denmark.

Ken Arensbak, top center, is shown training to shoot as he became a vital part in the Danish resistance in World War II.

COSBY—When Japan’s surprise aerial attack on the United States naval fleet anchored at Pearl Harbor, Hawaii on Sunday, December 7, 1941, catapulted America into World War II, a Danish teenager who would later settle on a Cosby mountaintop was already doing his part to thwart Nazi Germany’s plans to conquer the world.

Ken Arensbak was born August 18, 1923, in Aarhus, Denmark, a son of Christian and Marna Arensbak, who later moved their family to the city of Odense, birthplace of Hans Christian Andersen, where they owned a bookshop.

In 1939, Denmark signed a 10-year non-aggression pact with Germany, but on April 9, 1940, Nazi Germany ignored the agreement and invaded the small nation. After a short two-hour military resistance, Danish leaders surrendered.

Initially Germany and Denmark had an economic cooperative, with Denmark supplying much needed food and supplies to the Axis power. But in 1943, the Danish government refused to cooperate further, and the navy scuttled most if its ships and sent many naval officers to Sweden.

More and more the Danish government and Danish resistance members performed rescue operations to evacuate thousands of Jews and their families to safety in Sweden before Germany could send them to death camps.

In October, 1943, Sweden offered asylum to Danish Jews, and the Danish underground organized a nationwide effort to smuggle Jews to the coast where fishermen ferried them to safety in Sweden. Of Denmark’s estimated 7,000-8,000 Jews, all but approximately 500 escaped.

Ken played a vital part in the Danish resistance.

Only 16 years old in 1939, he was already an accomplished artist, and used his skills as a lithographer to forge passports and other documents for those trying to leave Denmark.

“He was so good at his work no one ever questioned the authenticity of the documents,” say his daughters Marianna Shaffer and Vivi Arensbak. “If he did the work, it was excellent.”

According to Ken’s family, their father didn’t dwell on his wartime experiences. “We know some families harbored Jews, but we don’t think his did. He also spoke of everyone wearing the Star of David to show their support of the Jews,” say the daughters.

“He was also involved in collecting caches of arms and other contraband dropped by the Allies into Denmark.”

Apparently the group Ken worked with was, what his daughter Marianna describes, a “loose network.”

“He spoke of somehow grinding down the firing pins on the German guns, but exactly how they had access to the weapons remains a mystery. Grinding the pins down, of course, affected the reliability of the guns,” she added.

The group also had signals, one of which was everyone changing a tire on his bicycle at 3:00 p.m. “Now exactly what this signaled, we don’t know.”

“If he was ever called in for questioning, he never mentioned it,” they added.

Meanwhile, he met another teenager, Neta Opager, daughter of Knud and Ingaborg Opager, teachers in private schools in Odense.

“They met in a record shop in 1943 and listened to music by Duke Ellington,” said Marianna. “Mother was 15 years old at the time.”

While Neta wasn’t known to have been actively involved in the resistance movement, she did have a horrible experience one day.

“She was riding home on her bicycle and came upon the body of one of her neighbors lying in the street. He had just been shot, and she had to maneuver her bicycle between his head and his hat. She later realized that had she gotten there 10-15 minutes earlier, she could have easily been shot, too,” said Vivi.

“She also told us that during the German occupation, no one in Denmark had cavities, because bread was made at a former clothespin factory and there was lots of sawdust in the bread,” she added.

Once the war ended, Ken finished his degree in lithography at the University of Copenhagen, and then studied art in Italy for a year. “He really wanted to be an artist,” explained Marianna, “but his father insisted he learn a trade first and then promised to send him for study.”

Meanwhile Ken and Neta’s courtship progressed. “Mom’s parents weren’t exactly thrilled,” said the girls. “Her sister had become a doctor and then married another doctor, and they had plans that Mom would follow in her footsteps. Marrying an artist was not what they had in mind.”

In 1949, first Ken and then Neta left Denmark for Canada. “They were allowed to bring $50 each and one trunk of their belongings,” said the girls. “Dad had a marketable skill as a lithographer.”

The couple married on December 31, 1949 in Montreal and, over the next couple of decades, began a series of moves, each one bringing them farther south.

In 1969 they purchased property adjacent to Great Smoky Mountains National Park, and, in 1971 moved to Cosby. Known by some in those days as “the hippies on the hill,” they began a business crafting trolls which have gained a worldwide market.

Ken never lost his love of art, and after putting in a day’s work designing and making trolls, he relaxed by painting or building “something out of nothing.”

What effect did the Danish resistance movement have?

From 1943-45, resistance movement members killed nearly 400 enemies—some Nazis, others identified as “informers,” and other Danes working for the Gestapo.

Over 850 Danish resistance members died, too, some in action, others in prison, and more in concentration camps. Some were simply executed after a “court-martial.”