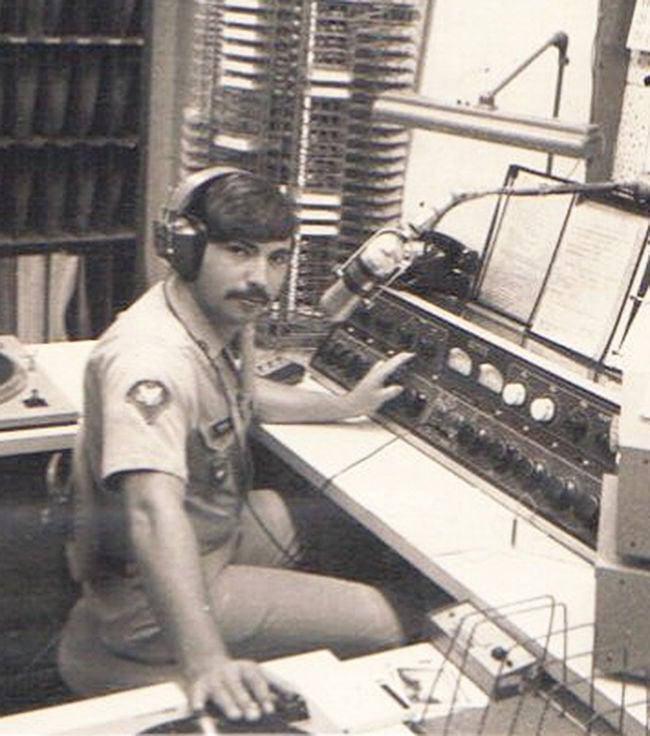 In 1970, Joe Moore was an announcer with American Forces Radio Thailand. He was in the Army during the Vietnam War era. Jim Phillips started his career with WLIK Radio the same year. 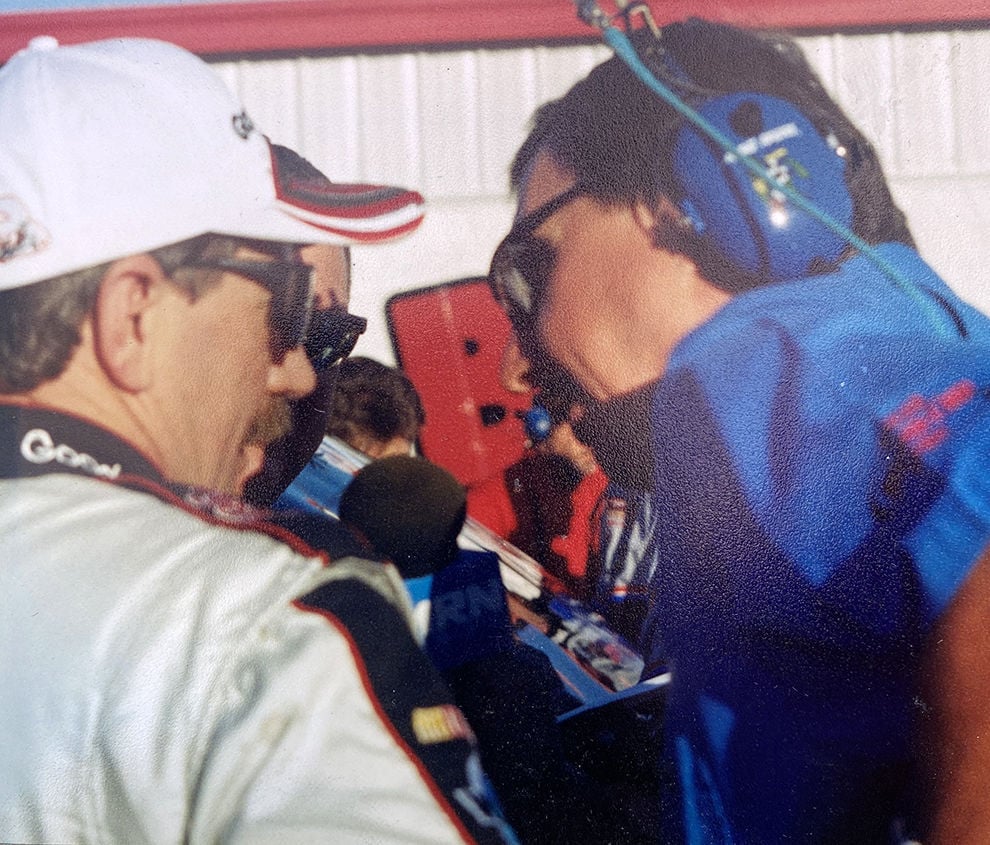 Jim “Chopper” Phillips, at right interviews Dale Earnhardt Sr. One of Jim’s proudest moments was when he did his last interview for MRN and it was with L. D. Ottinger. 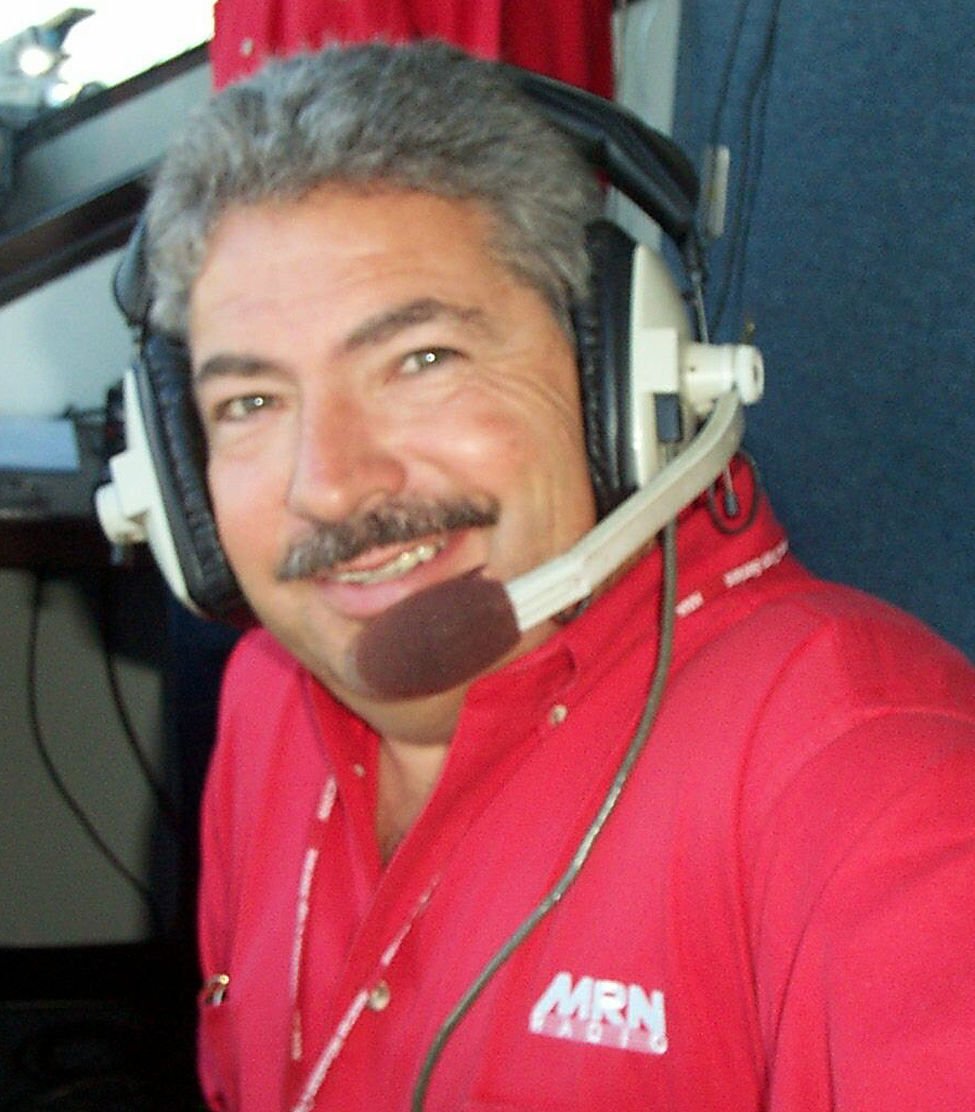 For 30 years, Joe Moore announced for the Motor Racing Network (MRN) and became like a brother to Newport’s Jim “Chopper” Phillips, who earned quite a reputation from late 1980s through early 2000s as a NASCAR pit announcer. 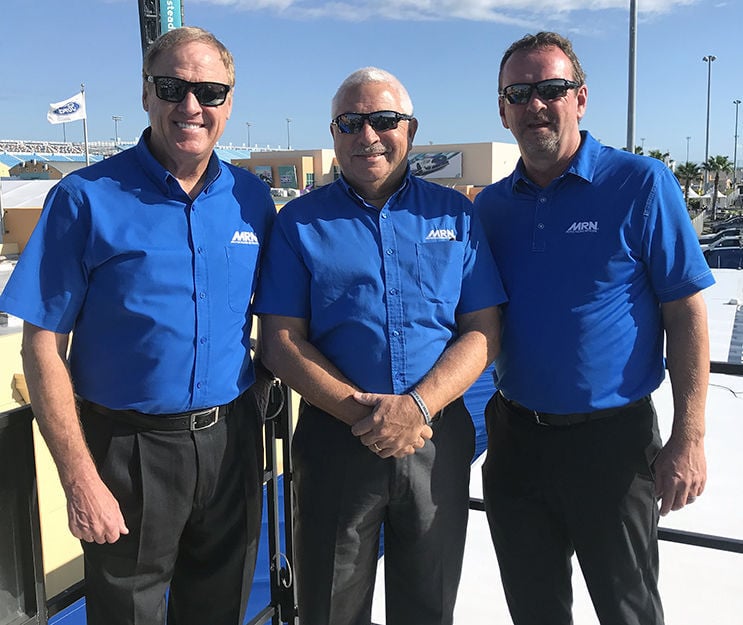 In 1970, Joe Moore was an announcer with American Forces Radio Thailand. He was in the Army during the Vietnam War era. Jim Phillips started his career with WLIK Radio the same year.

Jim “Chopper” Phillips, at right interviews Dale Earnhardt Sr. One of Jim’s proudest moments was when he did his last interview for MRN and it was with L. D. Ottinger.

For 30 years, Joe Moore announced for the Motor Racing Network (MRN) and became like a brother to Newport’s Jim “Chopper” Phillips, who earned quite a reputation from late 1980s through early 2000s as a NASCAR pit announcer.

Several weeks ago we began talking with two legends of Motor Racing Network announcers. If you listed to MRN from 1980s through early 2000s you know Jim “Chopper” Phillips of Newport and his associate Joe Moore, of Wilmington North Carolina.

For a short recap, Joe began his radio racing career in 1982 at Darlington Speedway. Chopper began in 1988 after completing a stint of about seven years with NASCAR legend L. D. Ottinger, of Newport.

Joe said that he and Chopper would annually announce about 30 races during the weekends from Maine to San Francisco and especially across the south. Many times they were on the same schedule and often flew together.

The year Chopper dove into covering the pits, Bill Elliott and Rusty Wallace were among the fast and furious track leaders. “Rusty won at Michigan that year and Elliott placed second.”

Here is the event that soured Chopper on Elliott. Chopper walked to Victory Lane to interview Elliott, but he turned and walked away. “I didn’t talk to him after that unless I had to.” But years later a mellower Elliott became close friends with Chopper.

During the late 1980s into the 1990s, Joe lived in Hampton, Virginia. Chopper would fly out of Knoxville McGhee Tyson, whether to Pocono Raceway in Pennsylvania or Wilkesboro.

During one rush to the tracks, Joe recalled that he was expecting Chopper at Wilkesboro. Remember there were no cellphones and they had no pagers either. “I saw Choppers bags but no Chopper.” He had walked thru the wrong gate at Philly and ended up in Pittsburg. It was a long bus ride.

Joe recalls, “Most every week, when we rented a car, he made me drive. There was no GPS.” Joe admitted getting lost numerous times. Their road trips started Friday and they were back home late Sunday night.

While covering what were then the Bush Cup races, it allowed the two MRN announcers to do some fishing. “We found fun things to do between races,” said Chopper, recalling visits to Fisherman’s Warf and Alcatraz at San Francisco.

“It got to a point it was just too intense,” said Phillips, who retired in 2006. This year marks 50 years of his involvement with radio broadcasting.

Joe held out until 2018 before putting the microphone down. They shared many highlights and historic moments of NASCAR, such as when the Daytona Firecracker 500 was on the beach and a night race. They worked over three decades as broadcasts increased, made more money, recorded more driver previews.

“You could expect Dover at times to be a five hour race,” said Chopper. Radial tires speeded up the races because the pit crews made fewer tire changes. “Talladega was a three-hour race.”

“When I started, there were no restrictor plates” on the monster four-barrel carbs feeding high flow of high octane. Chopper said that when Bobby Allison hit the wall at over 200 mph that brought about restricting the speed limit.

Speaking of the Allison brothers, who I first encountered in Miami. They raced twin-engine McCullough’s in the 1950s at the Hialeah Racetrack. We teenagers hung out and watched. Chopper said that in 1988 during he Daytona Goody’s 300, Donnie Allison hit L.D. Ottinger’s car keeping him from the Victory Lane, said Chopper.

The toughest time for Chopper happened February 26, 1990 at Richmond, VA. Joe was working turn one announcing. L. D. was racing that day. “It was in the 20s when I got hit,” by a motorhome. “It knocked me across two lanes.”

Last Wednesday, Jim relived that accident. After the race he and Barney Hall, a giant figure in MRN, had to walk about a mile to their vehicles. The traffic pattern for those leaving had changed.

During the chaos, Jim and Barney stepped out in traffic to cross when the motorhome struck him on his left side. Barney was at Jim’s right side.

“He got a head cut. We were running buddies. I protected him.”

Chopper suffered four broken ribs and a punctured lung. Ever, since, Chopper has been in declining health with serious neck and upper back problems.

The last time Joe and Jim were together was in 2014. “We were like brothers after all those years with MRN,” said Chopper.

Jim “Chopper” Phillips, age 69, lives at Bat Harbor on a large farm with his wife, Johnnie Sue, of WNPC Radio fame. He has three children and three grandchildren.

It has been one white lightning ride in highly recognized announcing careers for the two MRN “brothers,” and they still have plenty to talk about.