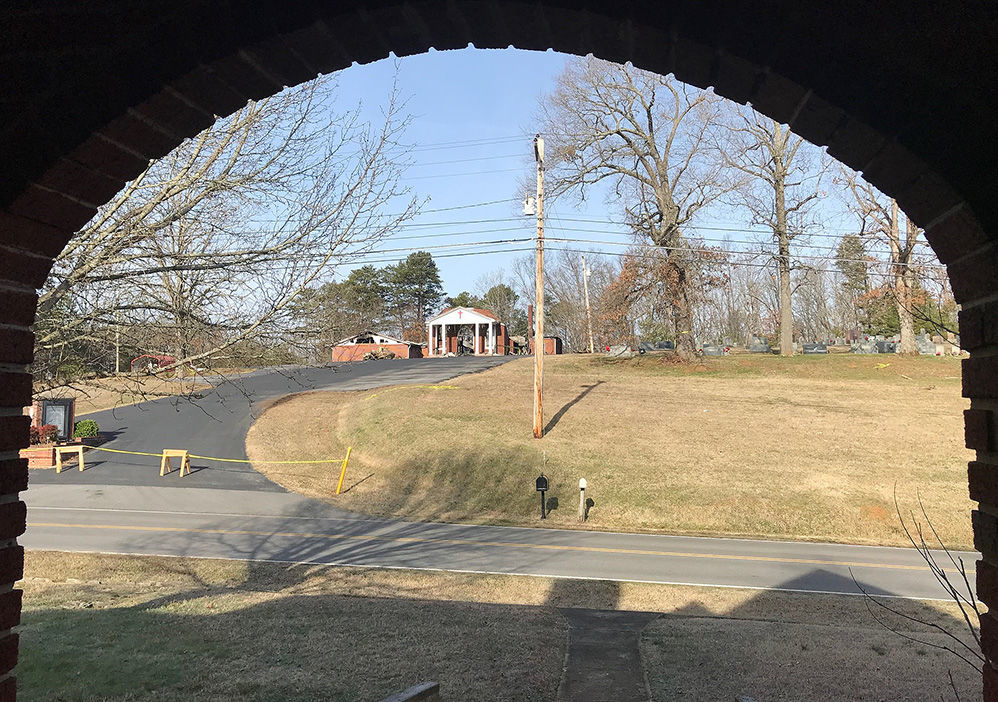 The church sits on a hill top across the Old Parrottsville Highway as viewed from the church parsonage. The parsonage is used for church gatherings, visiting ministers and guests doing the Lord’s work. 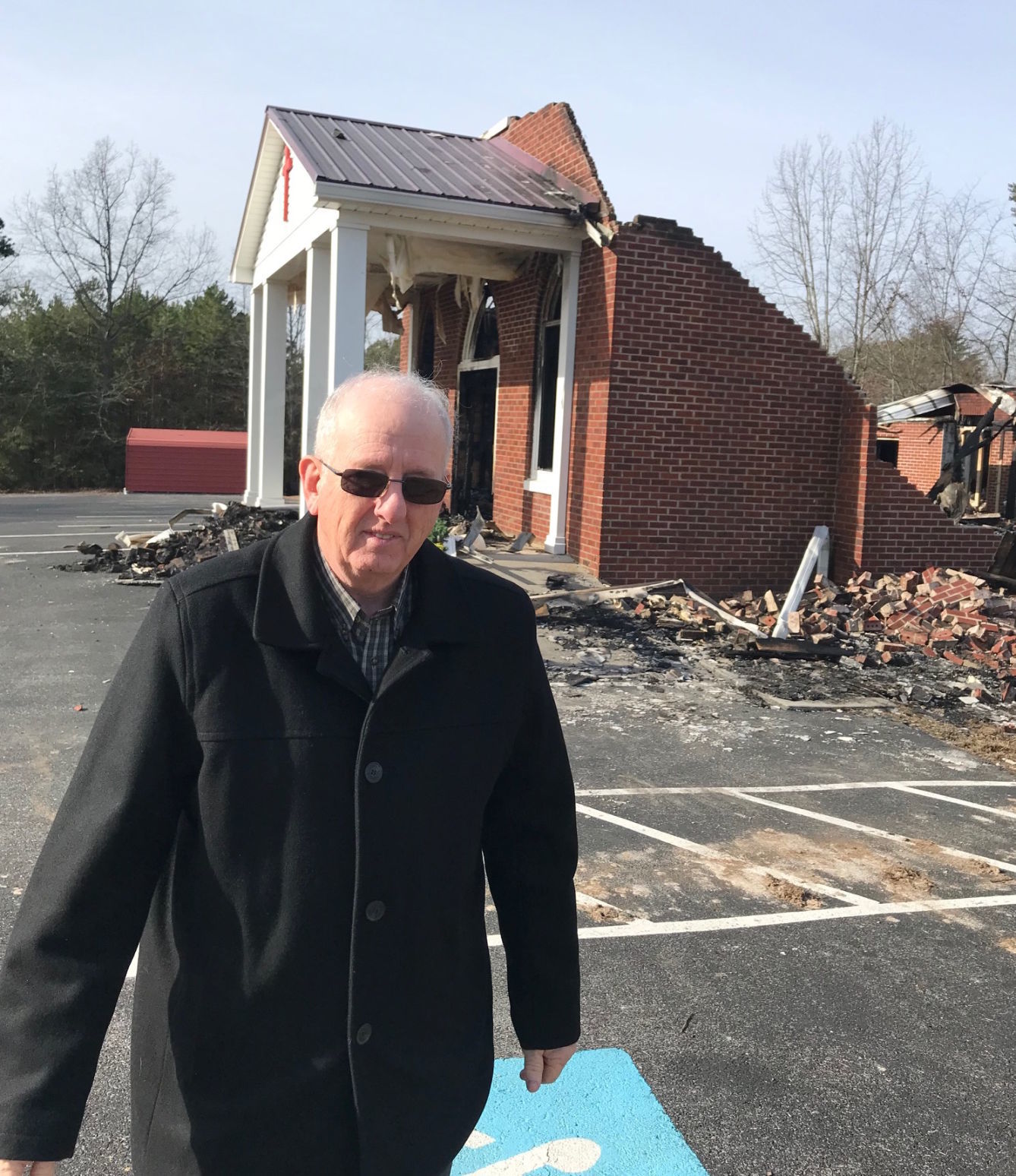 Pastor Michael Vickers walks in front of the burned Forest Hill Baptist Church built about 1906. He and the congregation are thankful no one was injured fighting the fire and that insurance will allow rebuilding this year. 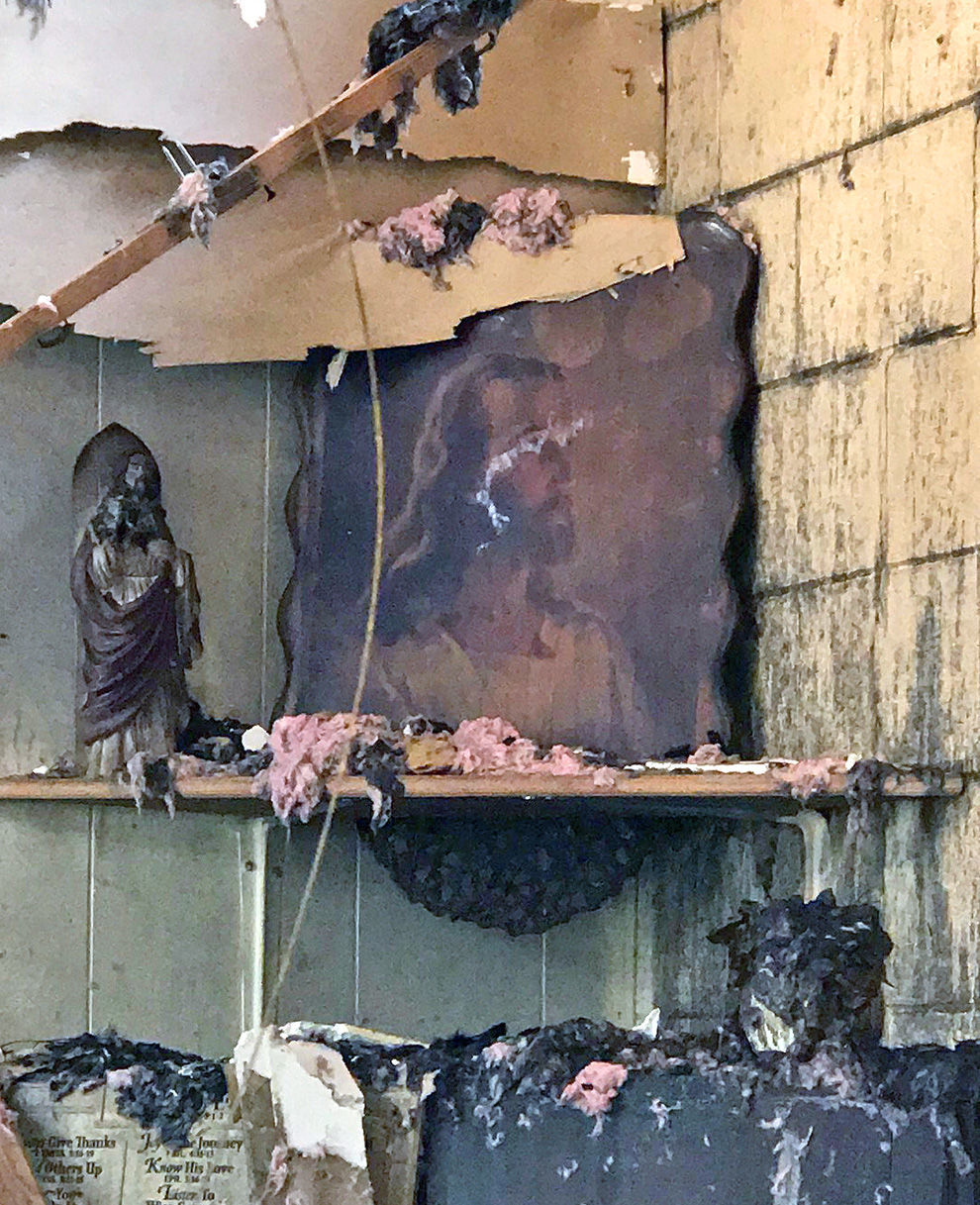 The picture of Jesus sheltered in a corner survived and will be rescued, cleaned, and presented to the Parrottsville Fire Department on Sunday, January 26 at morning service. 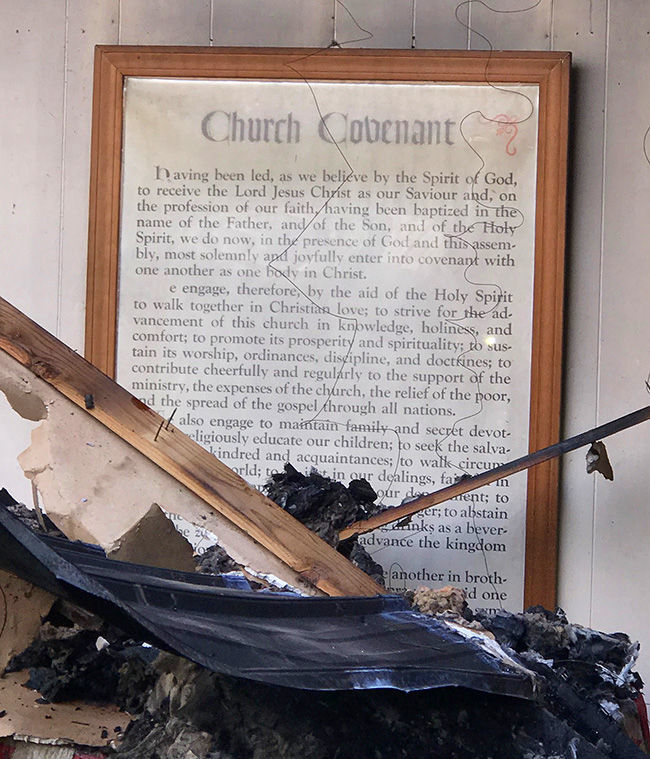 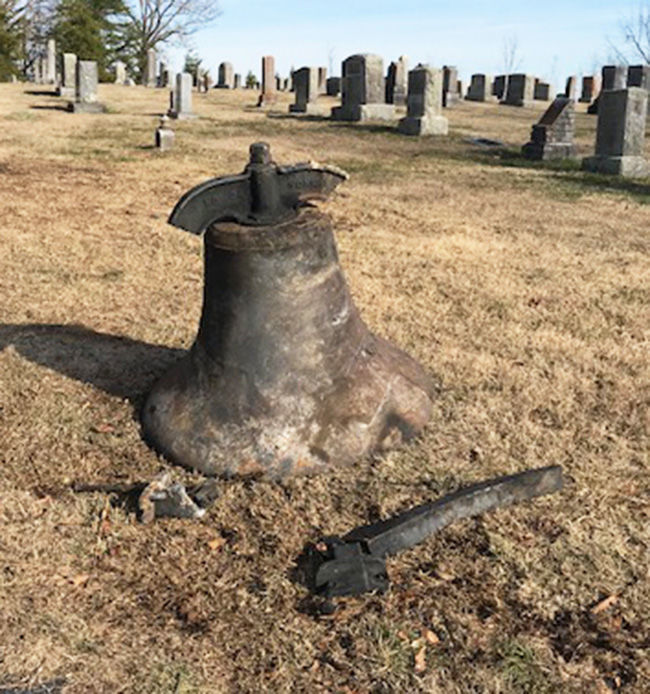 The bell that rang on Sundays at Forest Hill Church for over 100 years has been recovered after the Jan. 18 fire but had several large cracks caused by the intense heat.

The church sits on a hill top across the Old Parrottsville Highway as viewed from the church parsonage. The parsonage is used for church gatherings, visiting ministers and guests doing the Lord’s work.

Pastor Michael Vickers walks in front of the burned Forest Hill Baptist Church built about 1906. He and the congregation are thankful no one was injured fighting the fire and that insurance will allow rebuilding this year.

The picture of Jesus sheltered in a corner survived and will be rescued, cleaned, and presented to the Parrottsville Fire Department on Sunday, January 26 at morning service.

The bell that rang on Sundays at Forest Hill Church for over 100 years has been recovered after the Jan. 18 fire but had several large cracks caused by the intense heat.

Cold weather finally made January seem like winters past, when the temperature in our hometown fell into the upper teens and lower in the hoar frost covered mountains.

It was a struggle for me to warm and head out last Wednesday morning at 18 degrees. My plan that day was to join up with Mike Proffitt and visit his relative Edith Self Barrett off Highway 107 and we did that after lunch.

But because I happened to take a drive along the Old Parrottsville Highway I came upon the burned Forest Hill Baptist Church. The Newport Plain Talk and Alison Brooks reported on the early morning fire Saturday, Jan. 18. The last time I was at the church to collect some information was in 2018. Larry Ball did a renovation project, and I met pastor Michael Vickers.

I looked at the burned out church with a few brick walls standing and the red cross on the front. In a minute a white van pulled into the parsonage driveway across the highway from the church.

Pastor Vickers got out and invited me out of the cold. As we walked into the parsonage, built about 1950, he said this is where church services were held the day after the fire.

They had about 30 people gathered warmly for morning services. Soon the congregation will move over to the Forrest Hills Community Center, owned by the church. They have gotten good news after the grim event.

The insurance company, Southern Mutual, covered the entire loss so the church at 1518 will be rebuilt.

“A group of Parrottsville fire fighters will join us,” this Sunday, Jan. 26 at the 10:45 a.m. service. Pastor Vickers said he would remove the large framed picture of Jesus Christ that survived, along with the framed church covenant, clean it and present to the Parrottsville firefighters. There were at least six other fire departments responding to the blaze.

Looking back at the work the congregation and he had done over the past couple of years, he said they had moved from a situation of dwindling congregation to growth and optimism. “She was looking pretty for Christmas.”

The church still needed new flooring that had worn out long ago since the church was built about 1906. Vickers, 63, and other older members didn’t have the vigor to rip out and replace the flooring but their hearts and intentions were right.

“The Lord intervened.” Shortly after midnight fire destroyed it all.

Looking back, he said that little did his family know they would be in Newport, when they left a Talbot church to lead twin congregations in Michigan in the late 1990s.

“I’ve always been a dead church pastor,” he said, noting the churches he accepted were small older congregations and the doors threatened to be closed.

Michael was in his 40s when he became a church pastor and this plan was not on his horizon as a young man living and working with his father, Charles Vickers, in Knoxville.

The family operated Vickers Furniture in Knoxville, buying and selling antiques. He learned furniture refinishing, which came in handy at his first church in Michigan. The Vickers closed their business in Knoxville and moved to the family home at Deep Springs.

“I was an evangelical and attended Lebanon Baptist Church at Talbott,” he said. The church was energetic and did mission work. And Michael was “hide, hair and all” involved in missions traveling to Michigan for Vacation Bible School.

When he learned that the Adrienne, Michigan church was planning to close along with its twin Hispanic church, he said the Lord led him to talk with his wife, Sandra, and children and plan the move. It was a great leap of faith as the pay would not be much more than $150 per month. But the Lord’s people stepped up and helped.

By the Great Recession and closing of auto manufacturing in Michigan the churches declined. He became 60 and thought it was time to retire.

Michael, Sandra, their three girls and two boys returned to Tennessee. “I refer to East Tenn. as the Holy Land.” He learned of the need at Forest Hills Baptist, a Southern Baptist Church, and they moved here. The Vickers and the youngest child, a son, live at Edgemont Acres. Sandra teaches geometry at Jefferson County High School.

Things did not start well in Newport because he seriously injured his Achilles tendon while remodeling his house. But “The Lord leaned on my heart” concerning Forest Hills.

“This church was struggling. It was two or three deaths away from closing.” He discovered that some people had become satisfied with the way things were, but not Michael. That’s when Larry Ball came in to eliminate rain problems and create a rampway.

Holding up a metal chair for me to see the label on the bottom he pointed out that it stated: seconds. “As we get older we just settle for things. The Lord wants us to have firsts, not settle for seconds.”

The new vision is evident at the church and not diminished by the consuming fire. It did not damage their love for Christ. The new splendid church will rise out of the ashes of the old one.