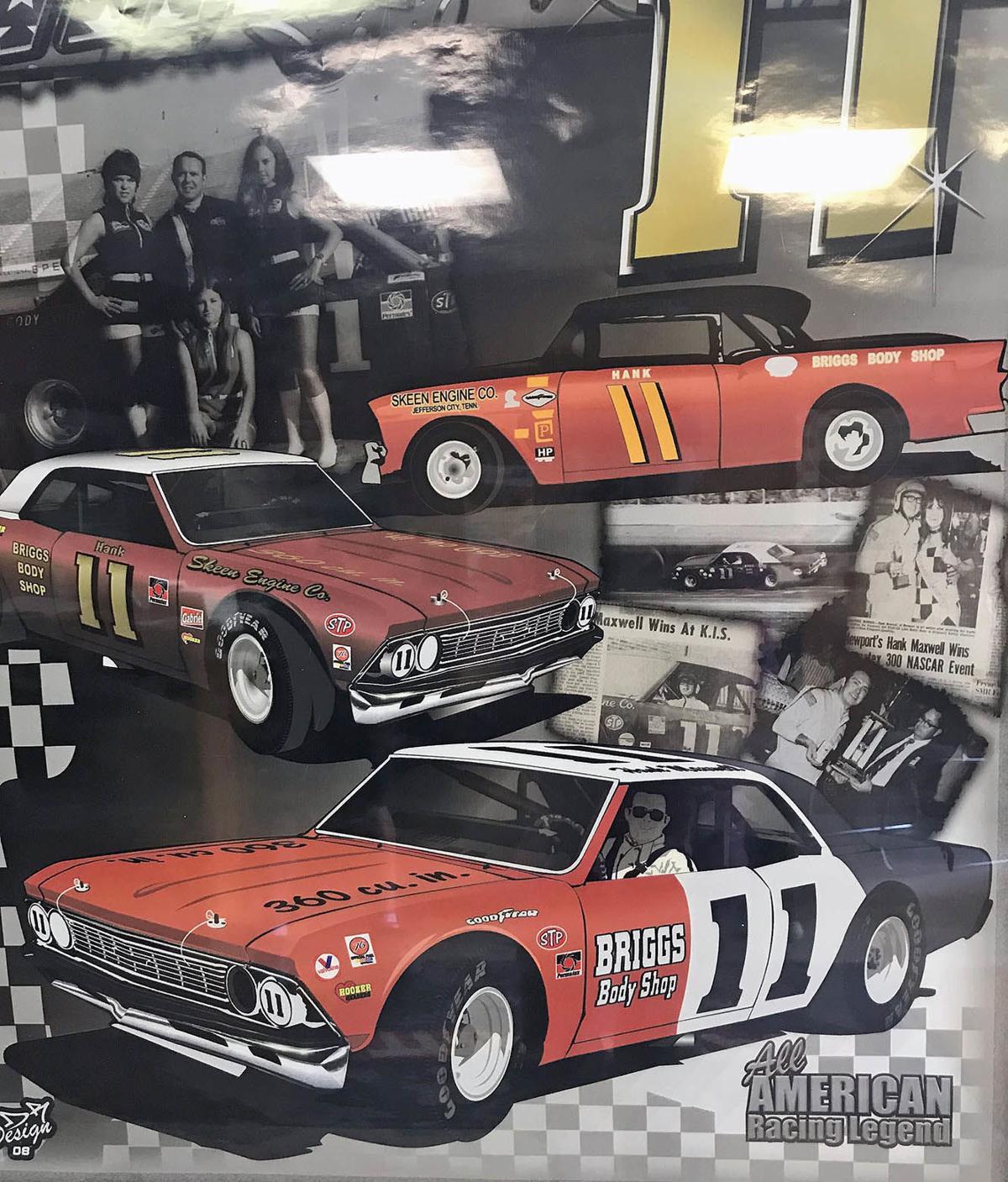 The Briggs family is proud of its history connected to local racing. From the early 1960s, Briggs Body Shop sponsored Ernie “Hank” Maxwell’s racing. Jack did a little driving himself but not much at the Tenn.-Carolina Speedway. Briggs and Maxwell proved to be a winning late model sportsman team for over a decade. 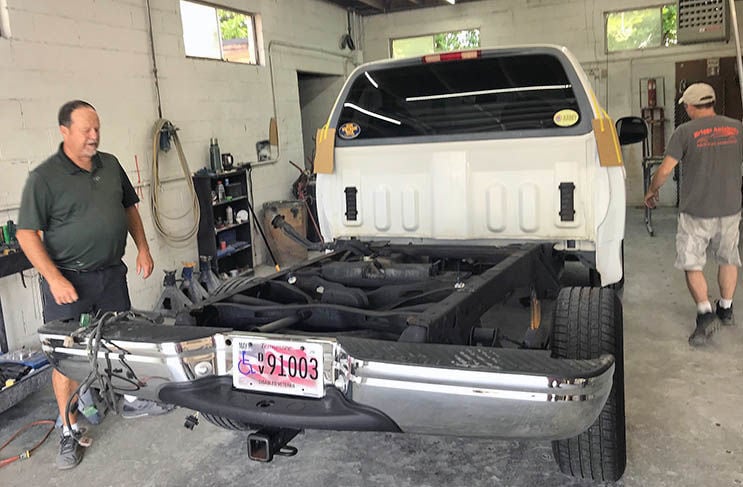 There is always a new problem to solve when repairing vehicles after an accident. Blake supervises frame alignment work on a truck at the auto body shop last week. 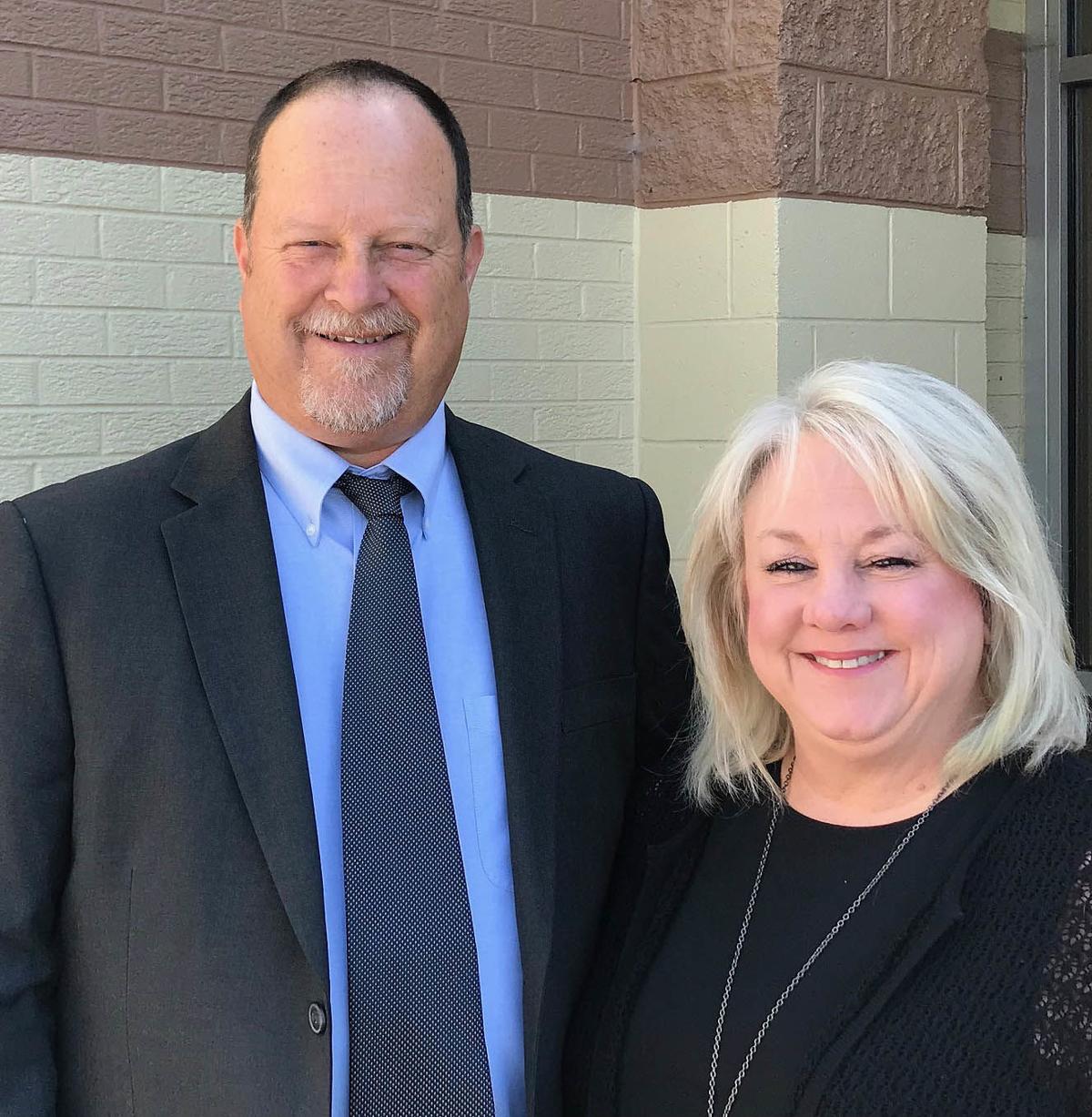 Blake and Patti Briggs had a couple of things to celebrate this June. He joined the gas utility board of commissioners, and June 1986 was the month and year they were married. 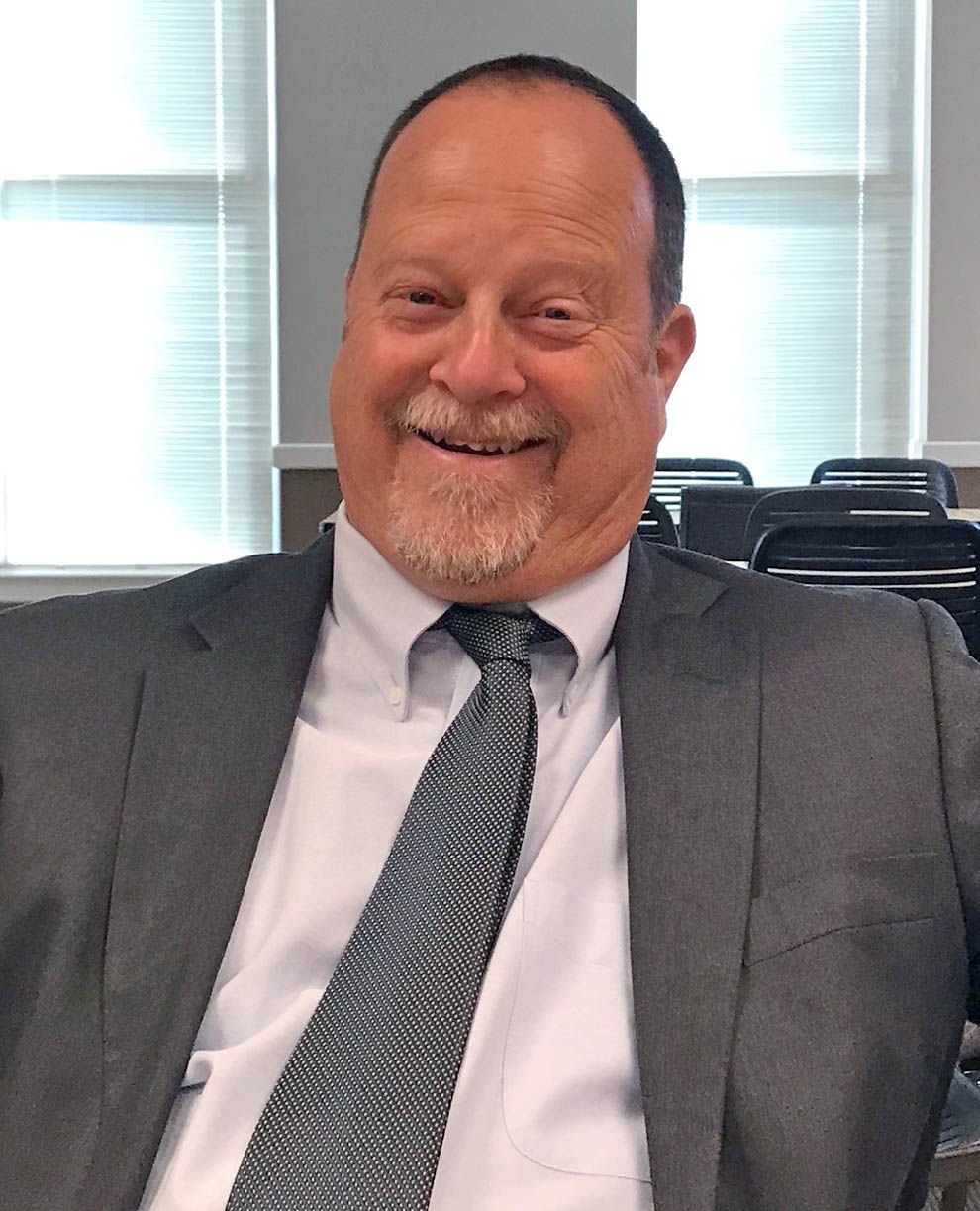 Blake Briggs is comfortable in a dress coat, as he was during his first Jefferson Cocke County Utility District Commission June 27 meeting. He is usually wearing work cloths at the body shop or his coaching cap.

The Briggs family is proud of its history connected to local racing. From the early 1960s, Briggs Body Shop sponsored Ernie “Hank” Maxwell’s racing. Jack did a little driving himself but not much at the Tenn.-Carolina Speedway. Briggs and Maxwell proved to be a winning late model sportsman team for over a decade.

There is always a new problem to solve when repairing vehicles after an accident. Blake supervises frame alignment work on a truck at the auto body shop last week.

Blake and Patti Briggs had a couple of things to celebrate this June. He joined the gas utility board of commissioners, and June 1986 was the month and year they were married.

Blake Briggs is comfortable in a dress coat, as he was during his first Jefferson Cocke County Utility District Commission June 27 meeting. He is usually wearing work cloths at the body shop or his coaching cap.

Less rain and more heat for July cast its spell over the mountain landscape for our hometown, yet drying days improved chances of harvesting summer hay and taking advantage of outdoor picnics for the holidays.

One of the highlights in late June for me happened at the gas utility when I covered the news at the recent board meeting. Blake Briggs, who owns and operates Briggs Auto Body, took the oath of office as the newest commissioner.

I’ve only known him casually, mostly name and the reputation of his father, Jack Briggs, who I had known since I joined the Newport Plain Talk in the 1970s. Jack was married to the former Patsy Campbell. The Briggs were constant supporters and advocates of the Newport Rescue Squad. So the Plain Talk was always on board with their support efforts.

I sat down with Blake twice over late June to learn more about him. I’ve already known his wife, Patti, from Newport Utilities. She attended the swearing in ceremony June 27.

Blake, age 58, like his late father, is extremely active and a hands on man at the body shop and obviously dives into all the things that interest him, such as coaching youth sports, golf, and formerly auto racing. I discovered only in our last minutes of chat his interest in the racing career of Ernie “Hank” Maxwell, number 11 driver—more about this soon.

For those of you who are familiar with Frog Pond in East Newport you know the area that Jack Briggs grew up. It is where his parents Joe and Marjorie (Taylor) raised the Briggs family. It is no surprise then that they are friends of Gary Hammonds family also from Frog Pond.

The Briggs auto body repair and painting business has a long family history going back to Blake’s grandfather, Joe, who started the business in 1954 at its current location. The original block building has been added onto over the years.

It is no surprise then that the Briggs family, including James “Tadpole” Briggs, along with men such as J. B. Etherton and Newell “Hop” Byrd started the Newport Rescue Squad. That building is a wheel-cover toss from the body shop off West Broadway, Newport.

Jack learned the business from Joe, who had a wrecker service. The men also got involved with the new local sport of auto racing at the Tennessee-Carolina Speedway. You have to remember that in the 1950s young men such as L. D. Ottinger, Don Collins, Doyle Belcher and others were already racing.

It was natural for Blake to go to work with Dad and start learning the business by observation and work: sweeping, cleaning, wet sanding, taping windows and chrome prior to painting. So Blake is no stranger to work, eats it like Wheaties.

He played sports, especially football, for Cocke County High School where he graduated in 1978. He decided to get more training and enrolled in the Tennessee Institute for Electronics (TIE), where he graduated.

Then he joined Magnavox as a technician and worked there six years into the late 1980s. It shouldn’t surprise you to know he carpooled with some of the Newport workers. He recalled that he frequently traveled with Midge Holt in her Volkswagen van along with Reva Cutshaw, Joann Stuart and other Magnavox workers. He paid $10 per week to ride.

After an issue with management over how some of the higher paid technicians, such as Blake were being treated, he left and rejoined Jack. By the end of the 1990s, the business was transferred to Blake’s ownership.

I asked how long he has known Patti, daughter of Charles “Tootie” and Betty Harper. “From grammar school days.” They stayed best friends and eventually got married in June 1986. Years later in 1992, the couple was the Plain Talk Christmas family.

They live on what they call the family farm at Edwina. They have two sons: Adam and Zach. Adam is studying computer networking technology at Morristown Vocational School. Zach is a technician in computer aided drafting (CAD).

Adam is married to the former Chastity Strom and they have a daughter, McKenzie. The question I should have asked but didn’t was how involved the Briggs boys have been in sports.

The side of Blake I didn’t know was his great interest and participation in sports. This began early and by high school he played wide receiver at Cocke County for Dale Chrisman. This led him to be coaching friends with Billy Buda, Steve McNabb, and Festus Talley. This fall, Blake again will be helping the coaches, as the Big Red begins their season.

He must have started coaching Little League while he was a teenager. His coaching friends included Chip Oury and Randy Ragan among others. “I coached years with Gary Hammonds.” Coach Mike Proffitt was Blake’s freshman football coach.

But his sports interests have been wide and extended to basketball, baseball, and golf. He was a close friend to Larry Lindsey and they coached baseball together. One school Blake mentioned was Northwest School and basketball.

The connection to Ernie Maxwell and late model sportsman racing is through Jack, who sponsored the number 11 car for many years. This must have been an intense period through the 1960s into the 1970s. Blake said that he recalled during the season that Maxwell won 27 races Jack counted the cost: winnings versus expenses and discovered he broke even. It was time to get out of auto racing.

Now Blake wrestles with the annual changes in technology, materials, and construction of new vehicles and fixing them after an accident. Decades ago folks spent money repairing their cars. Vehicles are so much more expensive owners keep them longer and when a major accident happens the insurance companies just “total” the vehicle. Thus, this creates less work for auto body shops.

Blake also is proud of his crew of five knowing that it is difficult to find skilled and dependable workers in this important trade. But he loves the business and paint must be in his blood.

His wrist is getting better now and he looks forward to returning to the golf course soon. Fall is not far away and the crowd’s cheer for the Fighting Cocks will get his adrenaline flowing as they run onto his favorite football field for another season.