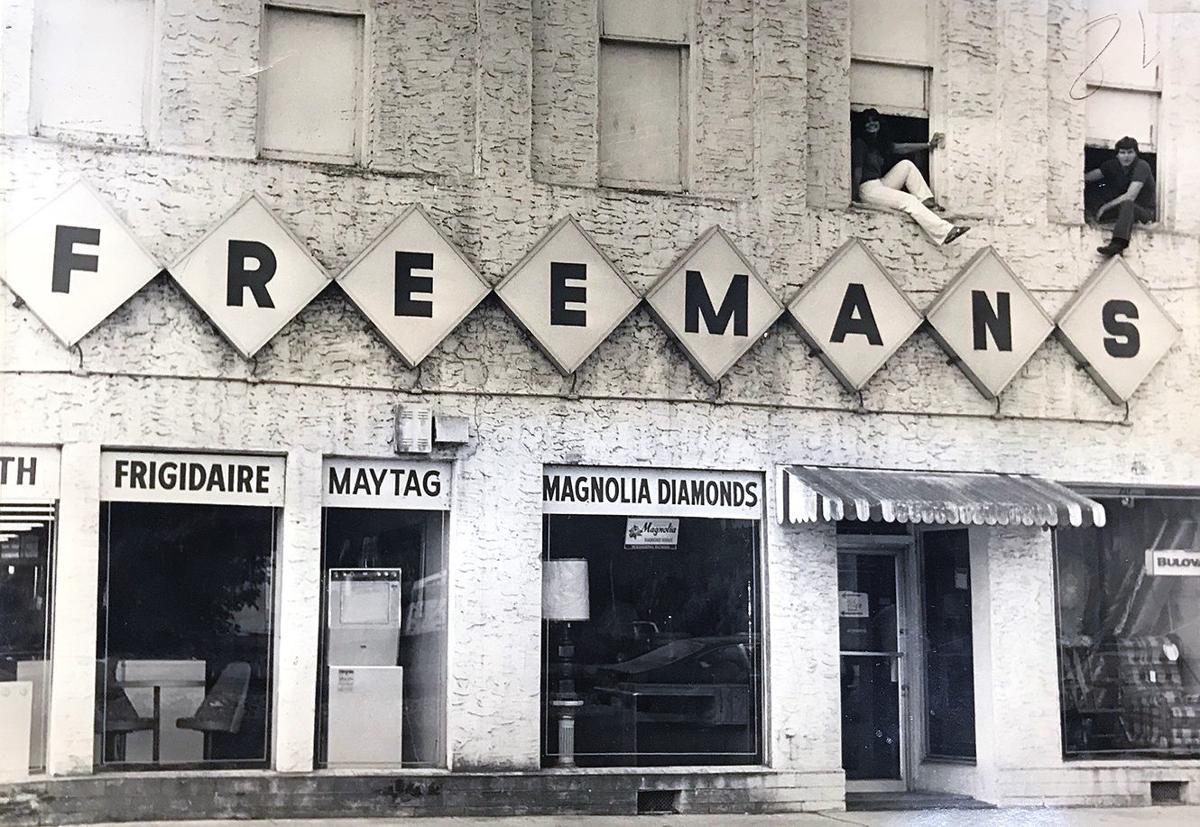 When I visited Freeman’s Furniture off Highway 25E last Thursday, Dawn and Brett Freeman shared this old Plain Talk photo from September 1981. I think that is Dawn and Tim in the upper right windows. The photos appeared in the advertisements that year. 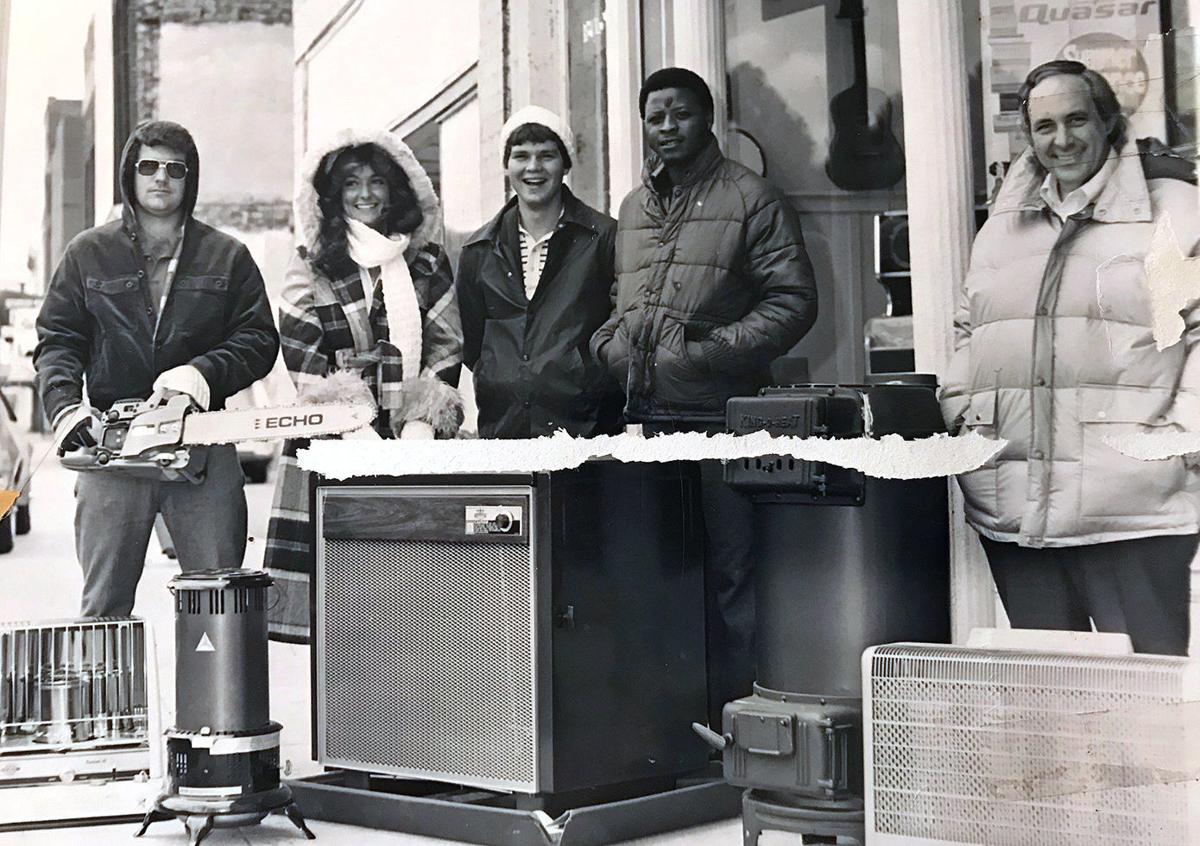 This winter 1981 Newport Plan Talk photo came to light during one of my recent column interviews. It is at the old East Main Street store in a building that at the time was owned by Rebecca Hall Freeman Glenn. Dan Freeman sold the store last year. From left are Jack Swanger, Dawn Freeman, Tim Lawson, Carl Pruitt, and Dan Freeman. 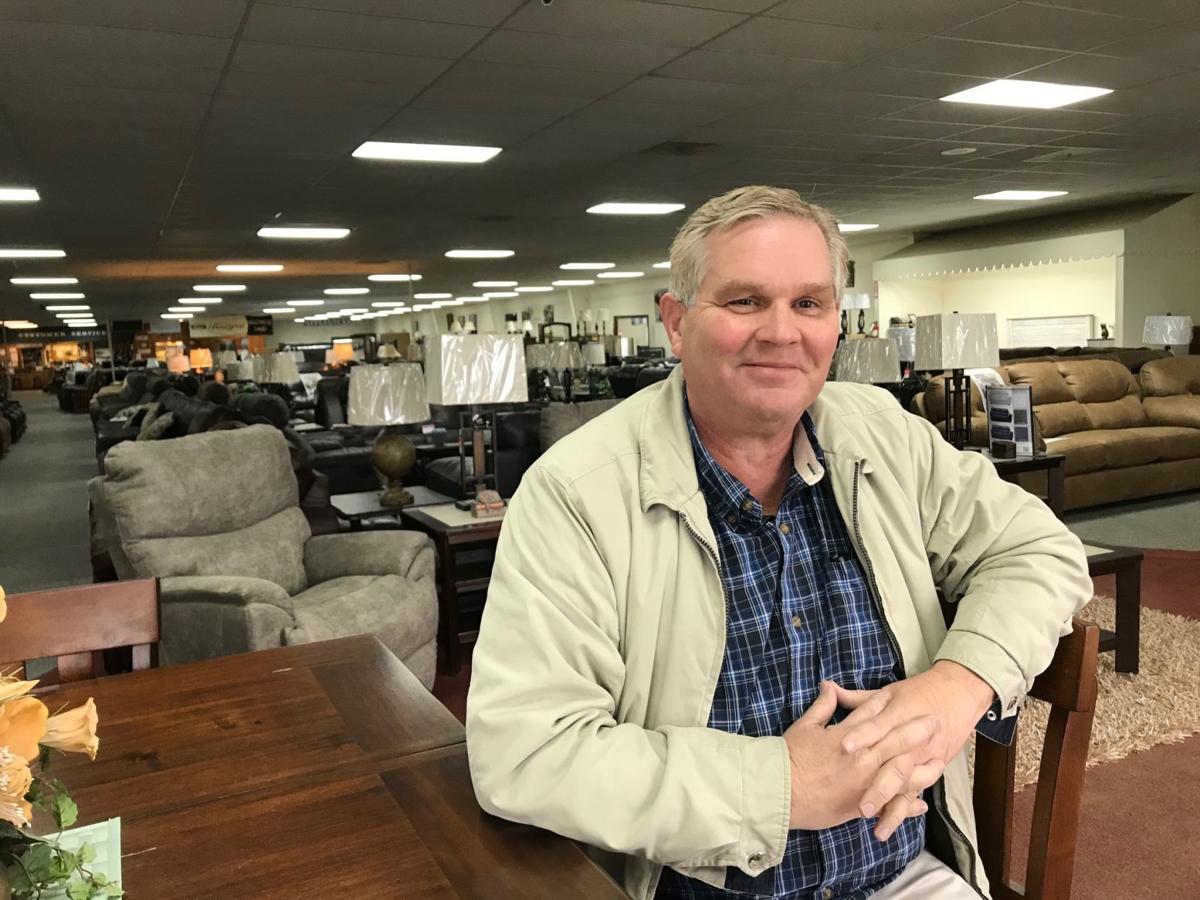 Tim Lawson, manager at Freeman’s Furniture, took some time to talk with me last Thursday during the light snowfall. He has been with Dan Freeman for 37 years.

When I visited Freeman’s Furniture off Highway 25E last Thursday, Dawn and Brett Freeman shared this old Plain Talk photo from September 1981. I think that is Dawn and Tim in the upper right windows. The photos appeared in the advertisements that year.

This winter 1981 Newport Plan Talk photo came to light during one of my recent column interviews. It is at the old East Main Street store in a building that at the time was owned by Rebecca Hall Freeman Glenn. Dan Freeman sold the store last year. From left are Jack Swanger, Dawn Freeman, Tim Lawson, Carl Pruitt, and Dan Freeman.

Tim Lawson, manager at Freeman’s Furniture, took some time to talk with me last Thursday during the light snowfall. He has been with Dan Freeman for 37 years.

Snow made believers out of the weather reports warning that this might happen on Thursday, when the early flakes mixed with slow rain continued throughout the day, turning heavier by lunch time.

I had planned to return to Del Rio to continue my talk with Jack and Edith Barrett but that will have to wait until drier times. And there are other stories too, such as my promised update on Mike Johnson’s last contract house that got slowed by the mud off Sane Road.

At Cracker Barrel for lunch, I spotted Carroll Kyker and went over to chat briefly about Newport Dry Goods, which is one of the few independent retailers left standing. I usually meet with Carroll to talk and write about spring fashions. Days like Thursday make you think spring might be postponed, yet it will arrive March 19.

Carroll has already been shopping this winter, he said, for those special buys and he continues to find tons of merchandise in the north that he is buying. One popular name I have bought is Duluth jeans.

He told the story of a man just across the border in North Carolina who is a big fan of the tough made Duluth clothing. He had just paid Online about $57 per pair for jeans, said Carroll. Then his mother told him Dry Goods had them in stock, on sale for $20. He found out the store was still open that night so he made a brisk run to buy more.

Weeks ago, on one of the my trips to John F. Frazier to talk about his life and sports, I came across an old Freeman’s Furniture store photo John had with his collection of Plain Talk clippings and old photos. This led me on Thursday to get the names of those in the 40-year-old photo.

It was lightly snowing when I arrived at Freeman’s off Morristown Highway, and manager Tim Lawson happened to be at the front door. I think he was expecting his wife, Tammy, to arrive for a minute and she did then left. We sat at a table and began talking about the Lawsons.

Over the years I have made many photos of and talked with Tim’s father, R. T. Lawson, married to Joy, and they live off Highway 411. He is retired Cocke County Property Assessor and also a talented house painter.

There are four children with Robert A. Lawson being the oldest of the boys. He is retired military and works as an advisor to Middle Eastern companies and countries. His wife, Atidzc, is from that area but lives in Carson Springs. Their son, Arin, attends Walter State Community College and works at Walmart.

I’ve known Terry Lawson, a police officer with Newport, for many years. His wife, Heather, is a dispatcher with Sevier County E-911.

The lone sister is Diana Epley, married to Ronnie. She is a school nurse in Jefferson County. By the way, Tim’s wife, Tammy, is a teacher at Edgemont where she has been for about 31 years. They have two sons: Matthew, who teaches mass communications at WSCC, and Zachary, who is in condo sales in Sevierville.

Those who are old enough to remember the young Tim will know he worked for about two years in the Asheville area. His job was to operate a railroad track aligner for Southern Company that later became Norfolk-Southern.

Back in Newport, where he had worked summers at Freeman’s, in 1983, he stayed when Dan Freeman hired him. I think the men think alike when it comes to Tim’s philosophy on the job: “I want the customer to get what they want. I have so many less problems that way.”

As we talked, the snow kept silently falling in 36-degree weather, he confided that his main job was “Getting to the other side of the river.” At first I was puzzled but then understood he talked in Biblical terms, over the Jordan River.

He has been keenly involved in Reidtown Community Church for many years and likes the pastor Rob Chambers. Tim is always willing to do whatever he can in the Lord’s work in church or out of church.

For 37 years he has been with Freeman’s and likes the people he works with including Brett and Dawn Freeman. Dan, who is pushing or at 80, takes a few more days off then in past years. I missed seeing him that day.

Before we finished our talk, Tim reminded me we are living in the best of times. He made the powerful observation that God puts men and women in the time, now, or through the centuries past, to make it the best time for them, as individuals, to prepare for Heaven. Now, that’s a thought worth sharing on a cold day.

He said Dad was doing well at age 88 and has many stories for me to hear. Tim shared this one when R. T. was about 13 and ready to join the Merchant Marines. I can’t remember the town Tim said he visited to join. But couldn’t find the office. He hailed a cab and told the driver where he wanted to go. The Cabbie drove around the block and returned to the spot he had picked up R. T. The cabbie asked for his dime fare. Puzzled, R. T. said where is the Merchant Marines office? The cabbie pointed to across the street. “Its right there.”