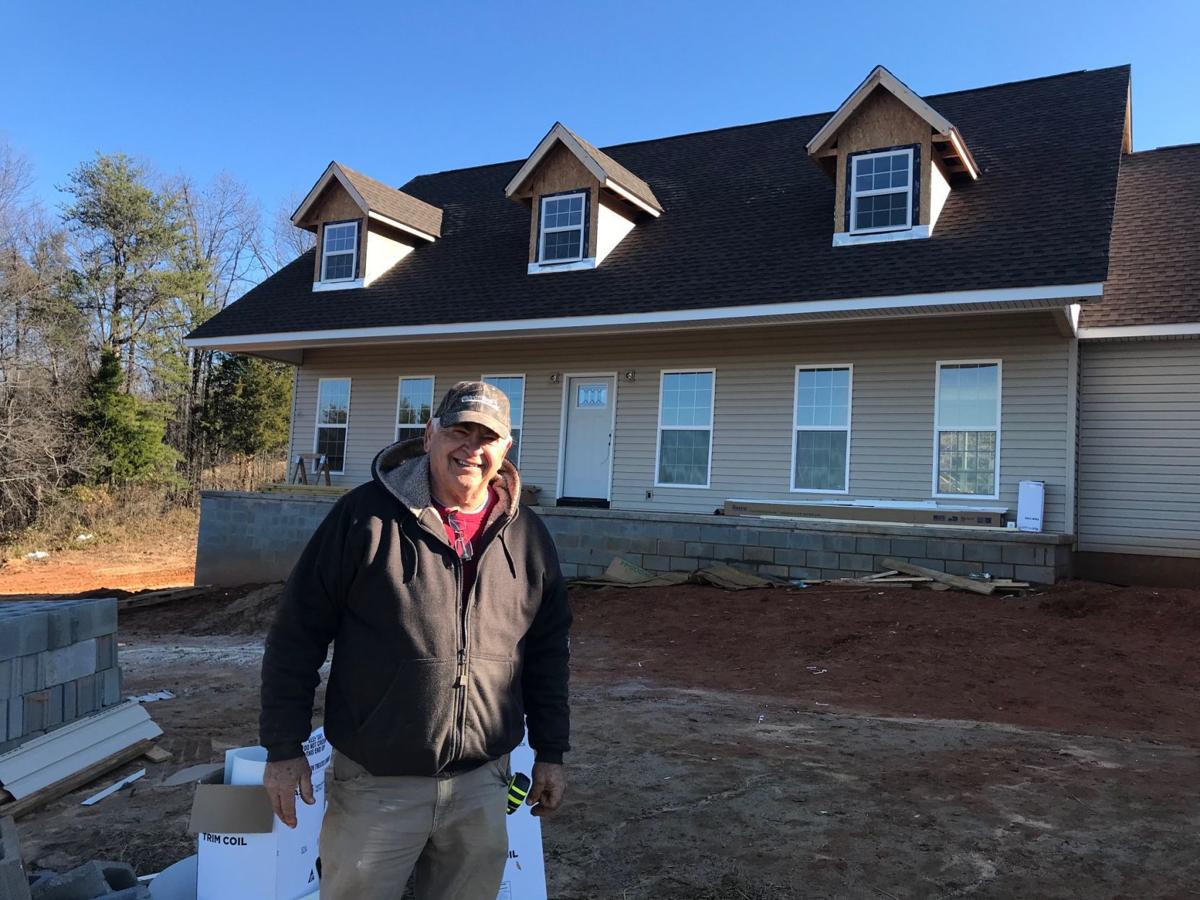 This might be the last contract house that contractor Mike Johnson will build, so he told me. The house is off Sane Road on a large tract of land with a high elevation, giving residents incredible views of the distant mountains towards Cumberland Gap. 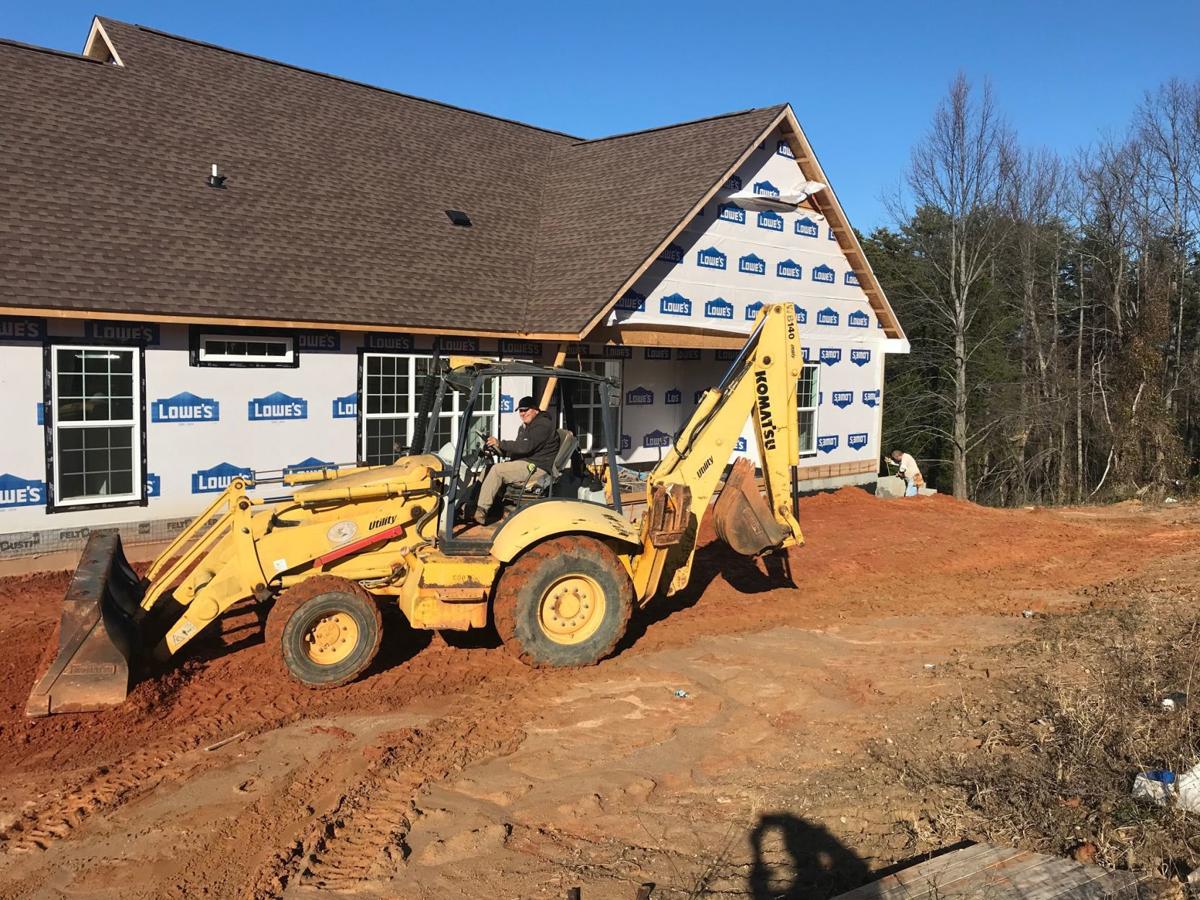 It’s not unusual to see Mike Johnson on his backhoe/frontloader doing one of the many jobs it takes to get a house built. Last Wednesday he was doing some finish grading at the rear of a contract house he plans to complete this year.

This might be the last contract house that contractor Mike Johnson will build, so he told me. The house is off Sane Road on a large tract of land with a high elevation, giving residents incredible views of the distant mountains towards Cumberland Gap.

It’s not unusual to see Mike Johnson on his backhoe/frontloader doing one of the many jobs it takes to get a house built. Last Wednesday he was doing some finish grading at the rear of a contract house he plans to complete this year.

Except for some gusty days, the recent December weather for our hometown has favored those who have to work outdoors to make a living. I visited one of those construction tradesmen who is marking 45 years building houses and structures in East Tennessee.

The trip to a side driveway off Sane Road last Wednesday gave me a chance to take in the rapid flowing creeks, such as Long Creek, and the last of the fall leaves. I found Michael “Mike” Johnson maneuvering a backhoe/frontloader, filling and smoothing an area at a nearly 2,000-square-feet home.

I’ve been acquainted with him and his family for most of the years I worked at the Newport Plan Talk. Mike was usually a prominent and regular advertiser in the newspaper. One of his favorite ways to get out his business message was during the spring homebuilding editions.

You might recall that I featured the remodeling of the former video store across from the Plain Talk, after Dr. Candi Overholt acquired it for her new clinic. Mike was there, as always, hands on helping finish some concrete on the floor.

When I asked him if he were ever going to retire, he said he was working on his last contract house. That inspired me to do a story on this last project and it is splendid. While the house won’t be finished until the end of December, when I can do a final follow up we chatted in the 50-degree late afternoon. The property sits on a knoll with a fabulous view of the north and a notch in the distant mountains that Mike said was the gap at Cumberland.

He grew up at Harned’s Chapel and River Hill, the son of Fred Johnson, a house builder, and Agnes (Blazer) Johnson. Her Dad was the late Hunley E. Blazer, most likely a kin to the late H. C. Blazer, father of former Cocke County Executive Bill Blazer, a dear friend of mine.

Fred died in 1993, and Agnes had preceded him in death by four years. You might know Mike’s brother, Charles E. “Eddie” Johnson was a member of the Air National Guard. He had entered in 1970 and was a pilot for fuel tankers, such as those that would refuel an F-16 flown by then Lt. Col. Charles Moore, who is now Major General Moore. Eddie retired at age 55 and is now 71, a few years older than Mike. Eddie lives in Seymour.

Mike said the family moved from Harned’s Chapel, when he was age 14 and lived close to the Old Greeneville Highway where he now lives with his wife of 27 years, Debbie.

“Dad was 40 years older than me. He was 58 when I graduated from Parrottsville High School.” That was in 1969. Then Mike attended the University of Tenn. studying business and accounting. He got a degree and intended to be an accountant. That didn’t work out, fortunately for a lot of his current customers and homeowners.

As a young man, Mike had helped Fred and later worked at Moore’s building supplies off Chapman Highway. He became familiar with building materials. Dad taught him to do electric and plumbing. Mike was a quick and eager study.

While attending college, Mike also was in the Air National Guard in Knoxville. The US economy in 1974, when he graduated, was still in recession because of the oil embargo so he built houses with his Dad, particularly finishing a duplex his Dad had framed. Mike later did a project for Dr. Shelton and also framed houses for the Hommels.

Some of the homes he built in his early years included one for Buddy Simpkins, the Dr. Ken and Carol Johnson home in the Golf Course community, Ernie Lunsford, and the Cornwells, too.

He built 15 homes in the North Ridge subdivision, also the Paul and Mary Cogburn home, and one for Larry Stanifer at New Tazewell. You recall that Larry is the executive for Cocke County’s Rural Medical Services.

If you drive through Parrottsville on the old highway, you will notice the Laundromat. Mike built this about 2005 for Dr. David and Libby Kickliter.

When Mike was not building from the ground up, he was remodeling houses and commercial buildings. These included the former Curves business into offices for Tennessee Human Services.

It is obvious that Mike loves his work and every aspect of it. Why does he continue at age 68? “It pays the bills.” While life as a builder might have been easier in the 1970s and 1980s, todays projects are larger so he must nail down money management, and worry about finding skilled labor. He is fortunate on his current project to have some top tradesmen, he said.

One man who helped him for many years and is retired is Mike Holt, who was from Bybee. I will continue this story and hope to show you photos of the finished last contract home that Mike Johnson builds at the end of December.