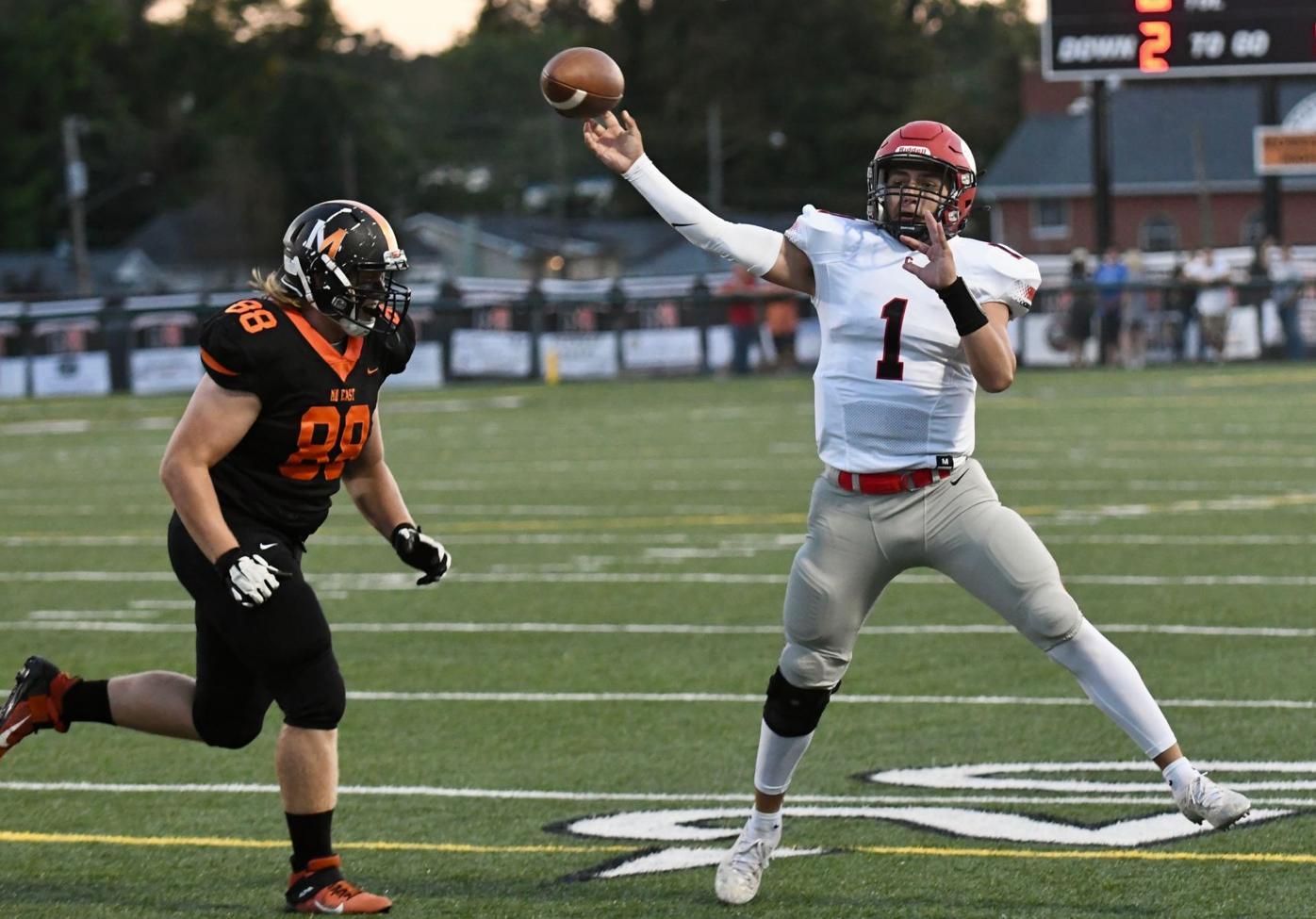 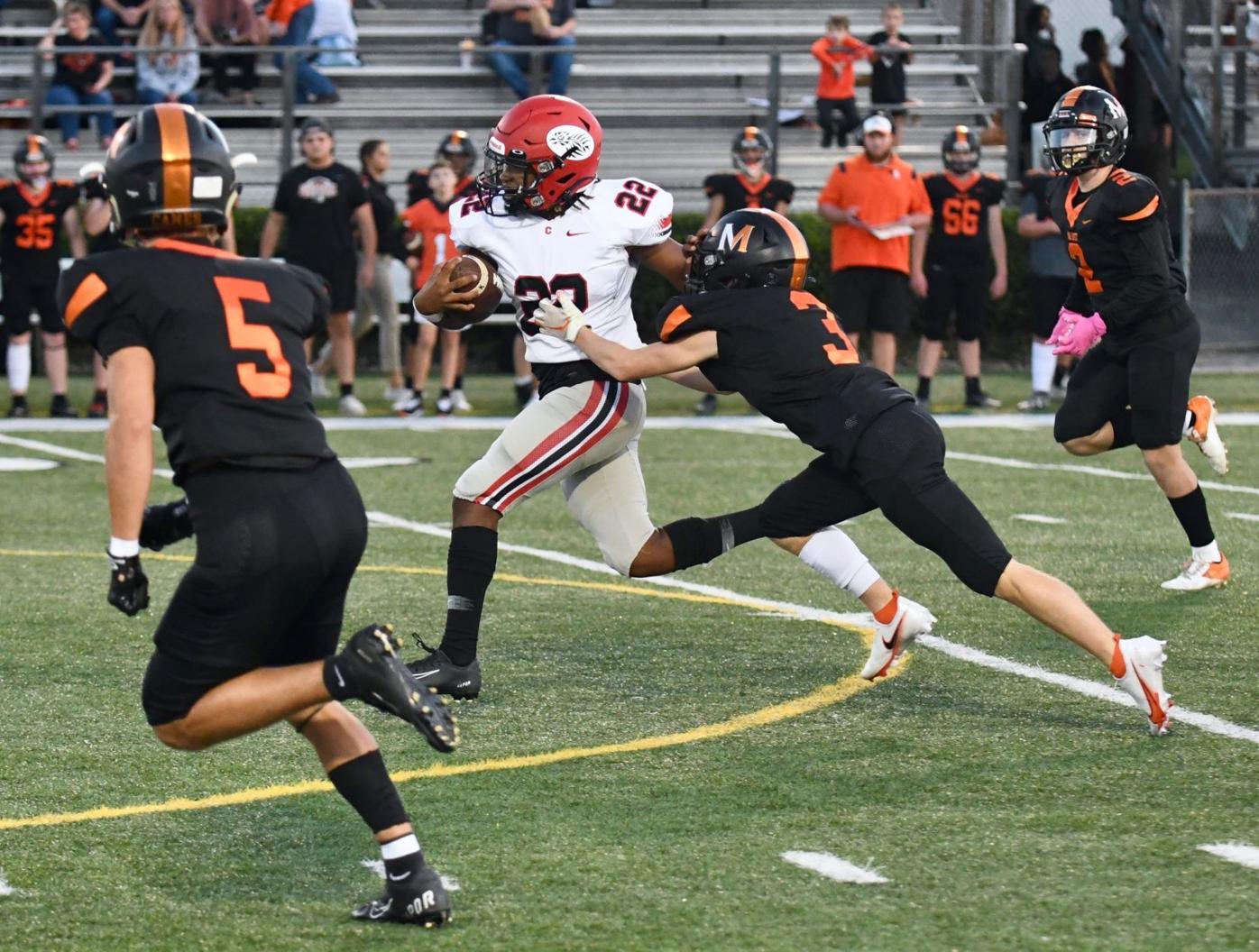 CCHS senior Roman Stewart fights through a tackle on the opening kickoff of Friday’s game at Morristown East. 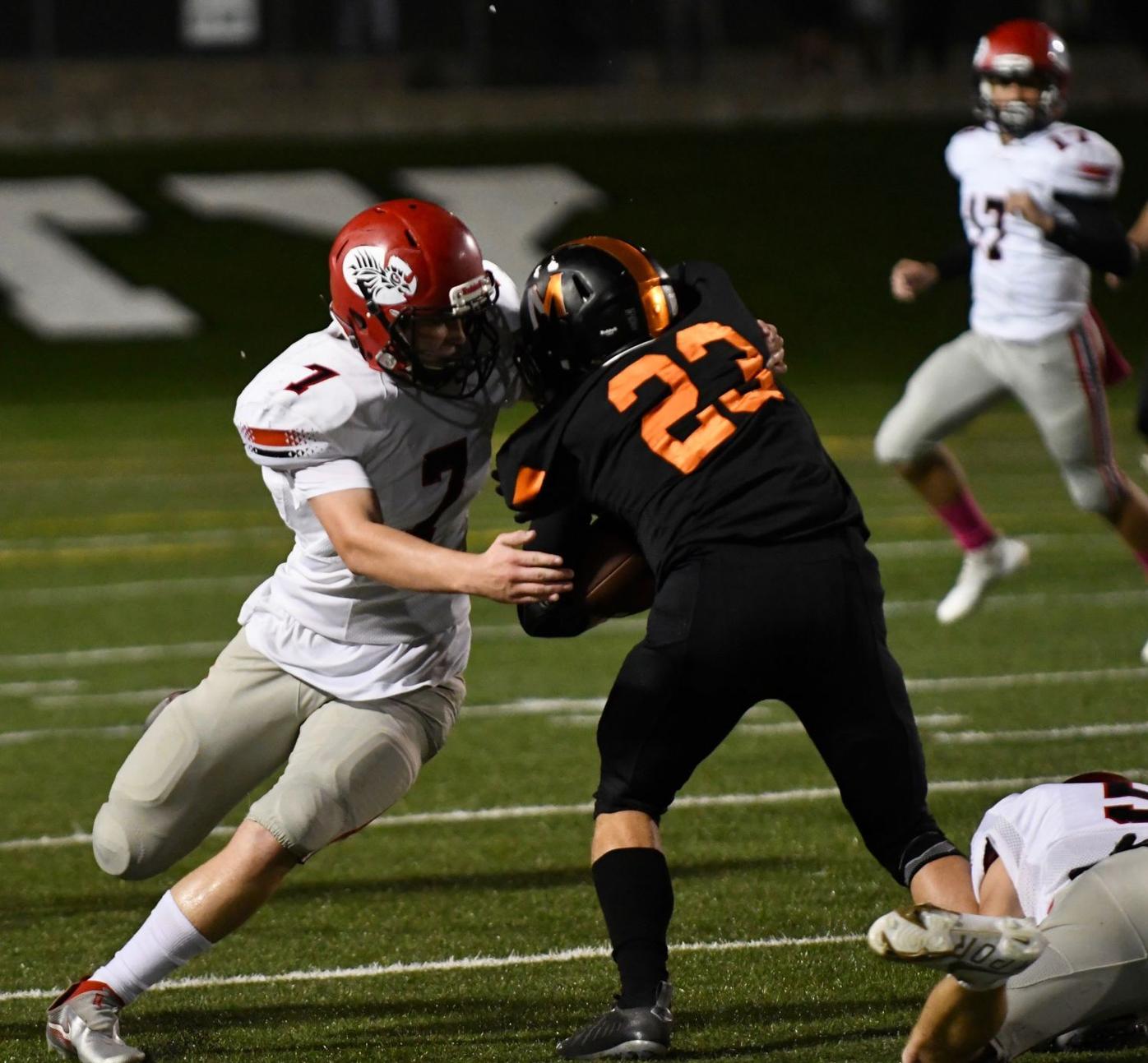 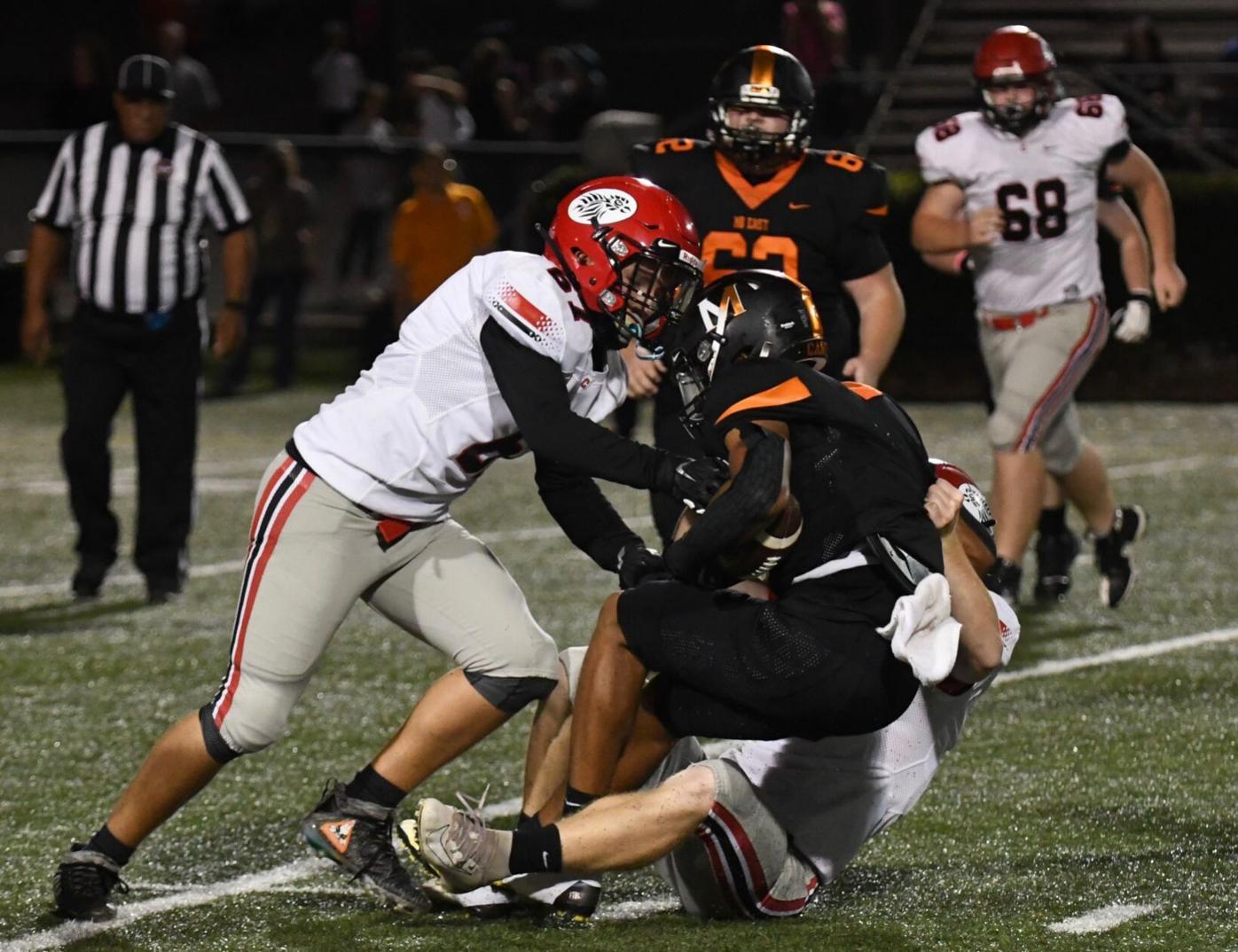 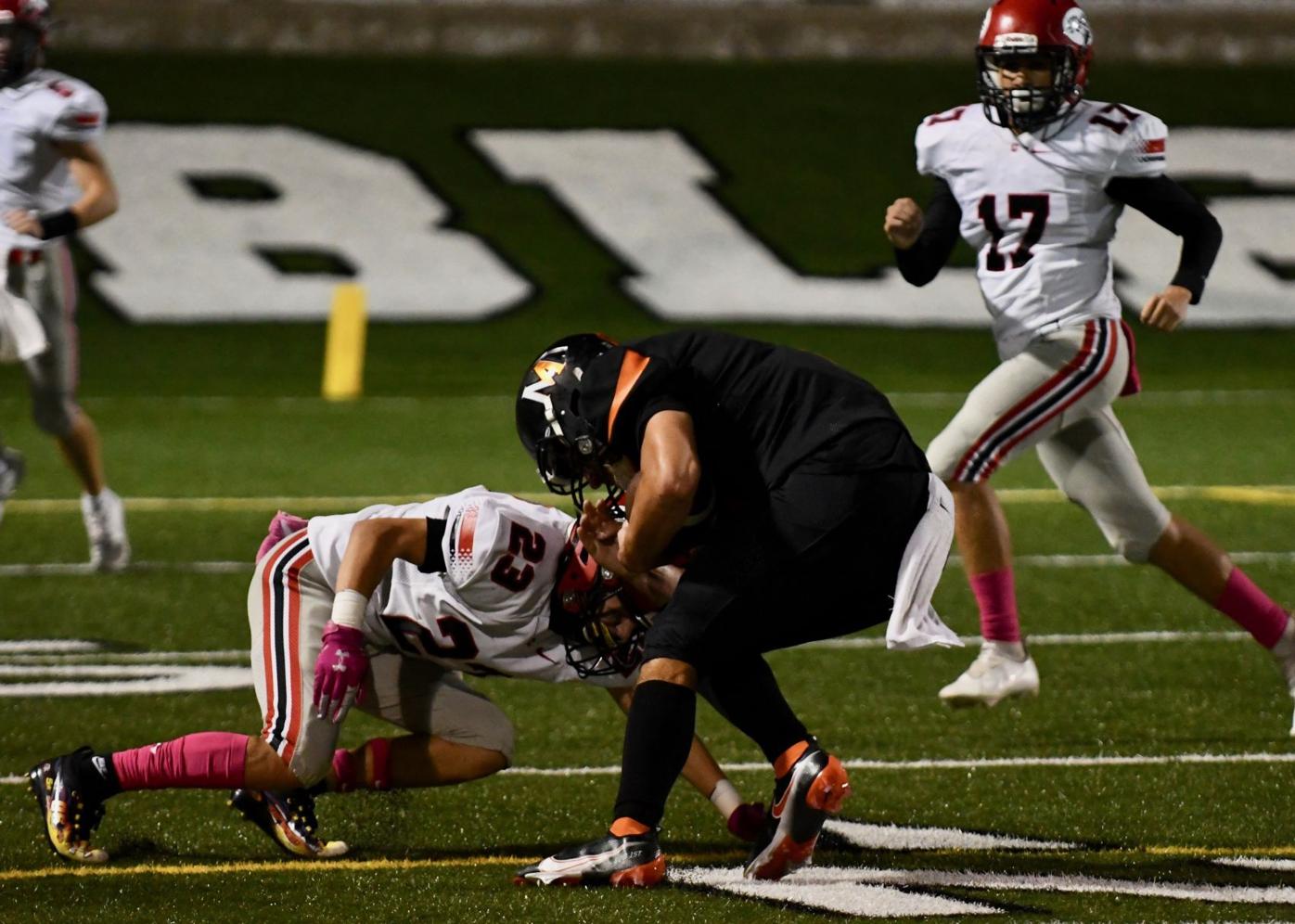 CCHS senior Roman Stewart fights through a tackle on the opening kickoff of Friday’s game at Morristown East.

MORRISTOWN—After scoring the first points of the game on Friday night, déjà vu set in for the Cocke County Fighting Cocks.

An impressive first drive gave way to season-long issues, as Cocke County was on the receiving end of another lopsided loss, this time to the winless Morristown East Hurricanes, 42-7.

After an impactful return on the opening kick, Cocke County (1-7) converted a crucial fourth down deep in Morristown East (1-6) territory to set up the game’s opening score.

Baylor Baxter found Lakkin France in the back of the end zone for an eight-yard score to go up early on the Hurricanes, 7-0.

Baxter finished the game with five completions on 17 attempts with 56 yards and a touchdown in Friday nights loss.

The last few weeks have been rough for the Big Red. After being blanked by the Knox Central Bobcats and Morristown West Trojans, getting on the board with the first drive was a big step in the right direction for a Cocke County team desperately seeking momentum.

“Our guys came out excited to play tonight,” CCHS head coach Scotty Dykes said. “We got some movement up front early. They were able to run the ball and were able to open up the passing game and we couldn’t have asked for a better start.”

Old issues re-appeared for the Fighting Cocks the rest of the night, though.

Morristown East responded with a 29-yard touchdown, as Eli Seals found Trevor Malone to tie the game up at 7-all on the next drive.

After keeping their second drive alive with another fourth down conversion, the Fighting Cocks’ drive stalled out. Momentum shifted fully in favor of the home-standing ‘Canes.

Ethan Ledford ripped off one of his three touchdowns for 61 yards with 3:15 left in the first quarter to extend the Hurricane lead, 14-7.

Ledford rushed for 337 yards on 21 attempts and added three rushing scores. His performance in the win was also a school record in rushing yards in a single game.

“He gave us problems last year as well,” Dykes said. “Ledford is a big back that probably averaged 10-12 yards per carry. We knew coming in that if the passing game wasn’t there that they would revert back to the running game and we just couldn’t stop it.”

Ledford also ran for a 22-yard touchdown to extend East’s lead to 21-7 early in the second quarter. Seals fired his second touchdown pass of the night to make it a 27-7 game by the half.

The Cocke County offense racked up a total of 107 yards but would give up 507 yards on defense.

With Morristown East receiving the second-half kickoff, Cocke County’s defense came up big with a fourth-down stop to start the third quarter. The Big Red quickly worked inside the Hurricanes’ five yard-line when Baxter found Kendrick White for a big gain of 43 yards.

With four plays from three yards out, the CCHS offense went no further though. East’s defense forced a turnover on downs.

“We got down to the three yard-line and tried to power our way into the end zone,” Dykes said. “We had a few opportunities to score but on the fourth down play we tried to spread out the offense to get Baylor on an option play that didn’t work.”

Ledford delivered the back-breaking blow with a 95-yard touchdown run on the very next play to make it a 35-7 lead for the ‘Canes.

“We knew coming into tonight that that would be a problem for us,” Dykes said. “Their line dominated up front and Ledford was able to have a big night.”

With their red zone struggles continuing on Friday night, the Fighting Cocks dropped their fifth consecutive game with a 35-point loss to the Hurricanes.

“A lot of people don’t know how tough 6-A football is,” Dykes said. “It is a step up in football. I think if you ask Coach Slover, going from 5-A to 6-A it’s immeasurable.

“I had a lot of experience in 6-A. That’s how it goes. They made some great plays. If you’re able to move the ball like they did tonight it’s going to be hard to beat teams like that. We’re going to have to do a better job at stacking the box and try to stop the run. Nothing we did could slow them down.”

Cocke County holds its final home game of the season next week, as it prepares to host the No. 1 team in Class 5A, Knox West, for a 7 p.m. kickoff at Larry Williams Stadium.