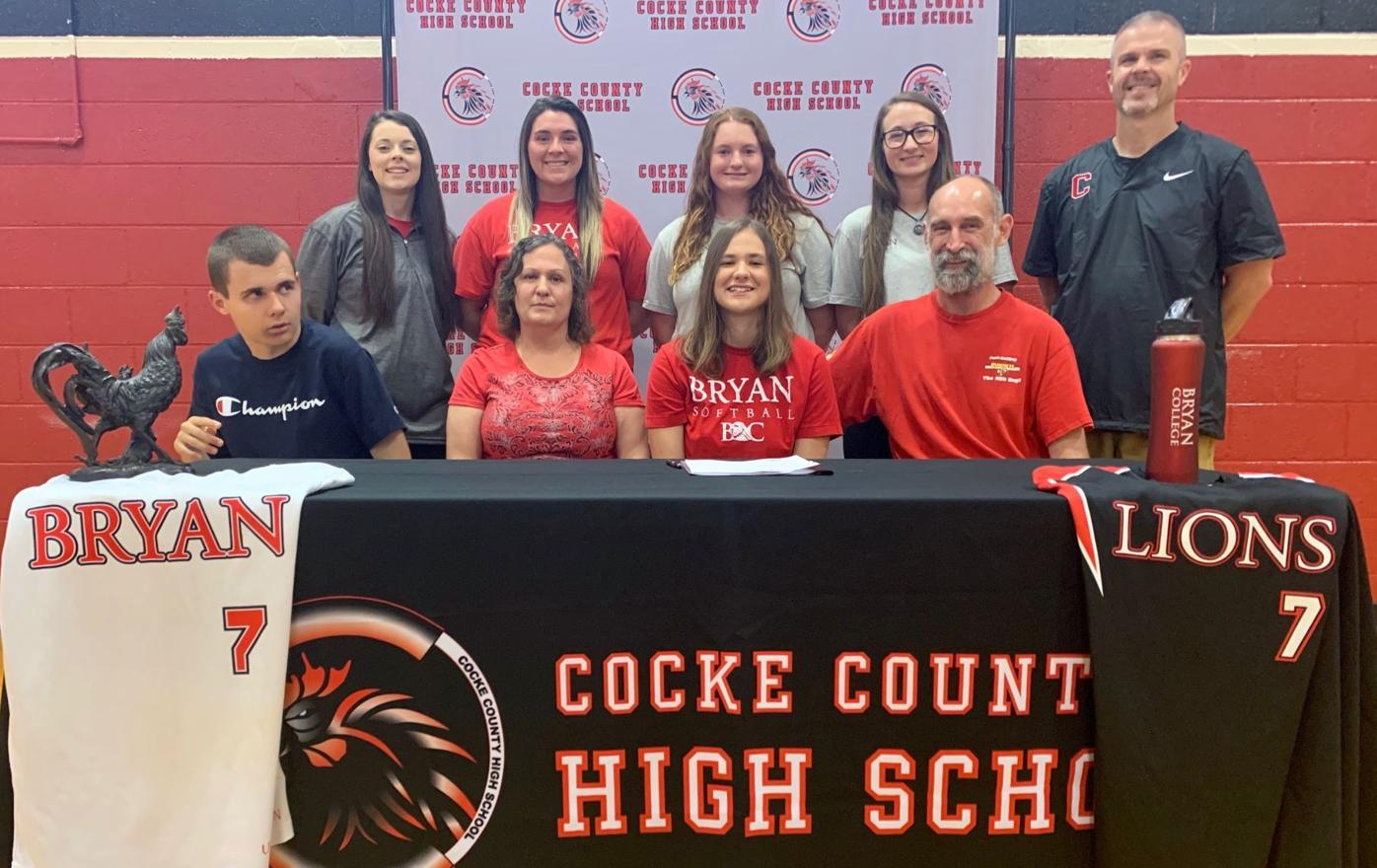 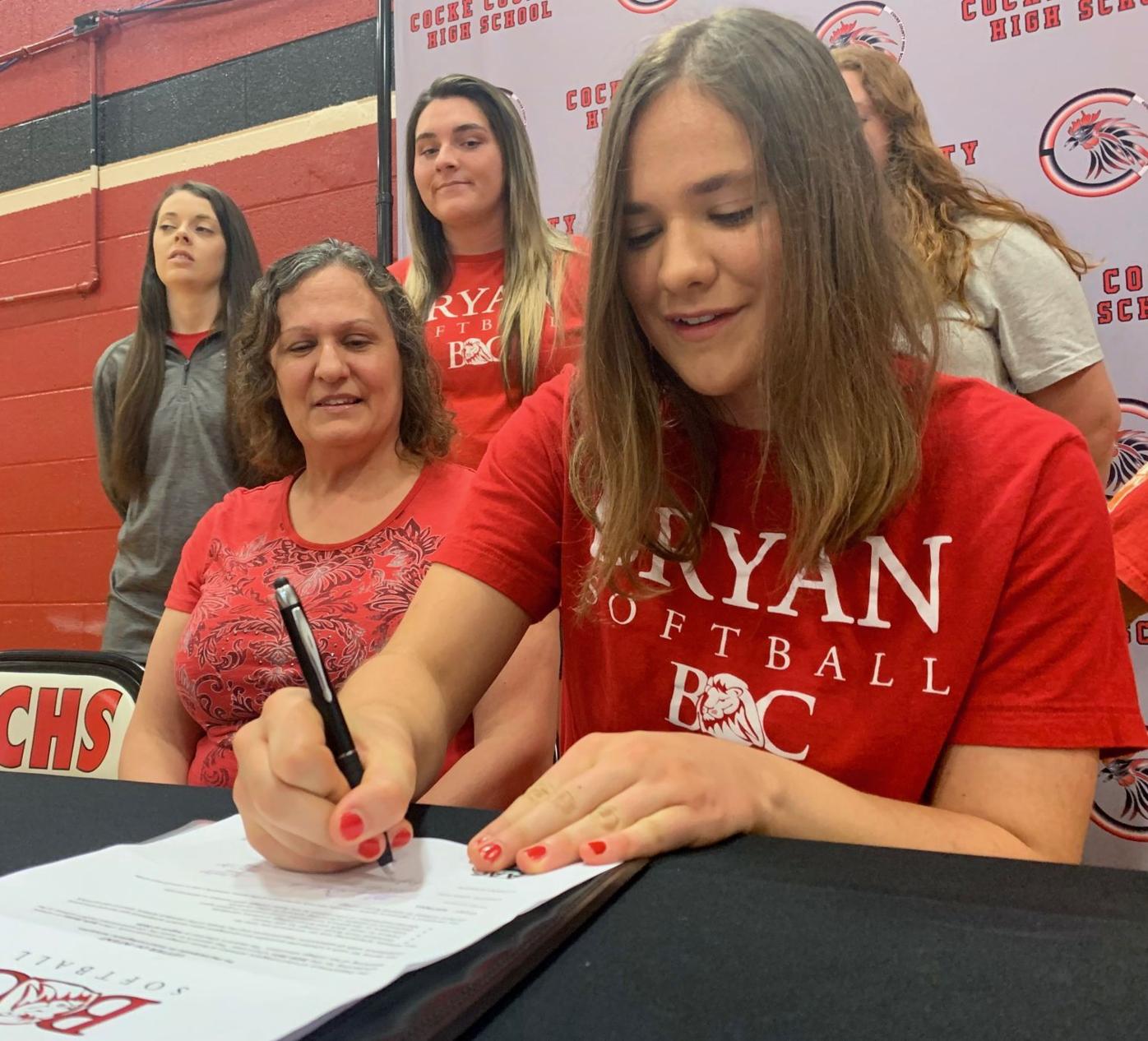 Kylie Stokes signs her letter of intent with Bryan College during her signing day ceremony at Cocke County High School.

Kylie Stokes signs her letter of intent with Bryan College during her signing day ceremony at Cocke County High School.

After sending a pair to join the Lions program ahead of the 2020 season, CCHS softball added another to the program’s roster after Kylie Stokes signed with them over the summer.

“This has been a special time for me,” Stokes said. “I’ve enjoyed my time at Cocke County, and getting to go off to Bryan (College) means a lot. I’m excited to leave one great school for another great school.”

As part of the 2020 recruiting class, both Ariel Holt and Jarica Ensley joined Mark Ritchhart’s program as he headed into his third season as the team’s head man. Ritchhart has seen year-over-year improvement with the Lions since taking over in 2018, and will hold a strong core of CCHS alum to work with as he enters his third campaign with the program.

“I guess we’re turning into a feeder program. In the last three years we’ve sent three kids to Bryan (College), alone,” Lady Red coach Nicole Chrisman said. “I think that shows we’ve taken a great step in the right direction with our program.

“I’m super excited for them to get Kylie to go with Ariel and Jarica. Anytime we can have a girl get the opportunity to go play at the next level is a great accomplishment not only for them, but for our school.”

Ensley and Holt each made their presence felt in their first year with the Lions.

In 2019 the program finished the year 20-28 after being ousted in their first two games of the Appalachian Athletics Conference tournament. The team was .500 in league play on the year at 13-13.

While Bryan College had only made it through 19 contests before the 2020 season was called off, the team held a 12-7 overall record, and was a perfect 6-0 in league play. The Lions were on a seven-game win streak before the season was cancelled.

BC graduated seven seniors this season, leaving room to be filled with incoming talent like Stokes, who hopes to chip in with the CCHS alum that have already established themselves within the program.

While CCHS has its own family of athletes building at the small-town college, it was the family-like atmosphere that led to Stokes ultimately deciding to further her softball career with BC.

“The community stood out to me during my recruitment,” Stokes said. “Everyone on campus was so warm and friendly, and that extended to the softball family, too.”

Stokes time with the Lady Red softball program was brief due to the implications the COVID-19 pandemic had on high school spring sports in 2020.

This season marked the first year she came out for the team after running track & field upon first attending Cocke County High School.

“She tried out a few years ago but decided not to play,” Chrisman said. “Since all of this has happened, all I can think is how different the last two seasons could have been for us had we had her in the fold with some of the previous seniors our program has graduated.

“I just hate she didn’t get the time she deserved to showcase her ability here.”

Her work away from the high school field served as enough to land her a college offer with the Dayton, Tenn. institution. But even in her short time working with Chrisman, Stokes has proven herself to be a perfect match for the Bryan College program.

“They’re getting a super kid out of (Stokes),” Chrisman said. “She’ll do anything you ask without hesitation. She’s a team player and follows instruction. Just in my short amount of time with her I’ve come to learn how great her character is, which has me convinced they’re getting a great addition to their program.”

"They're getting a super kid out of (Stokes). She'll do anything you ask without hesitation."