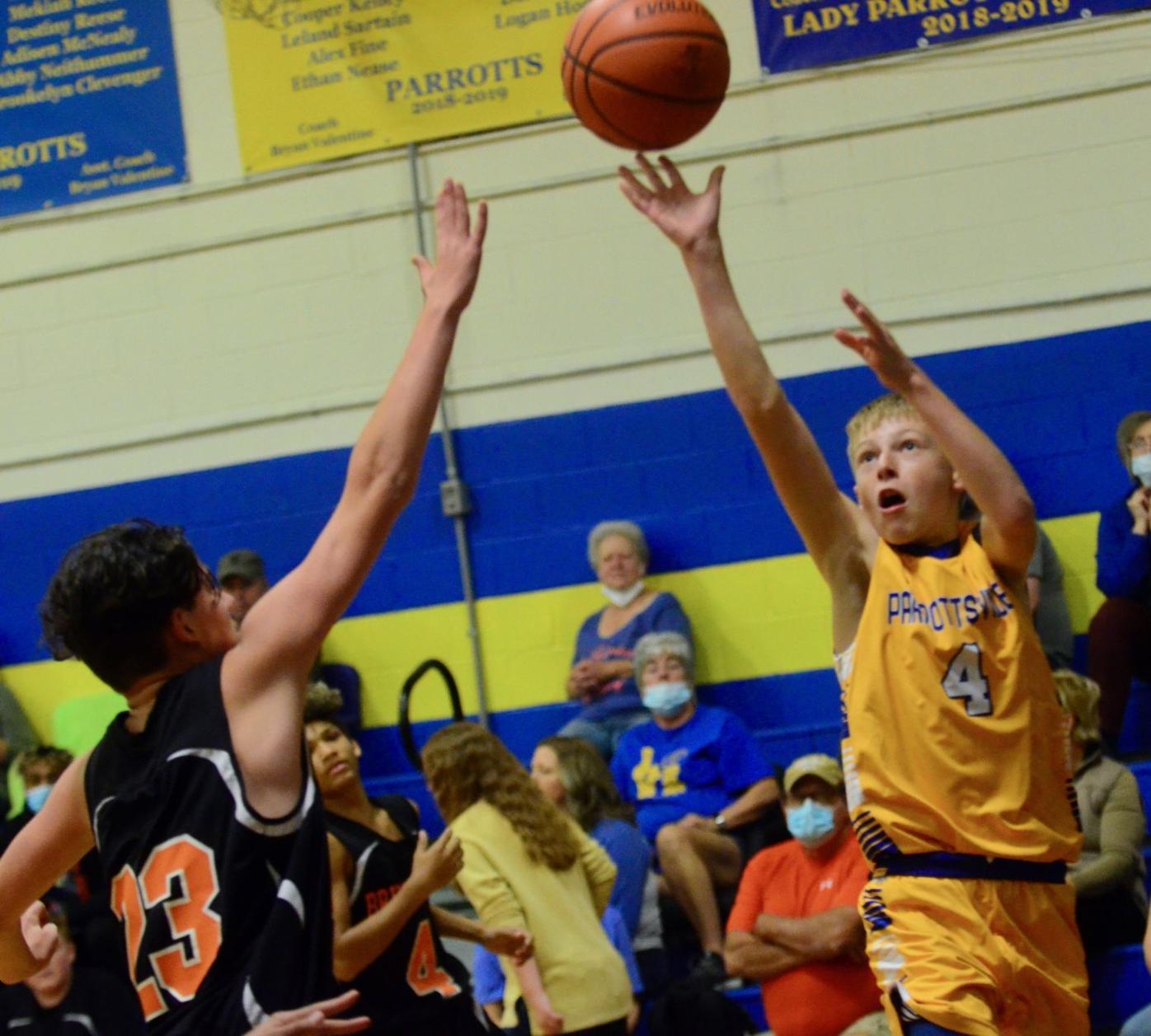 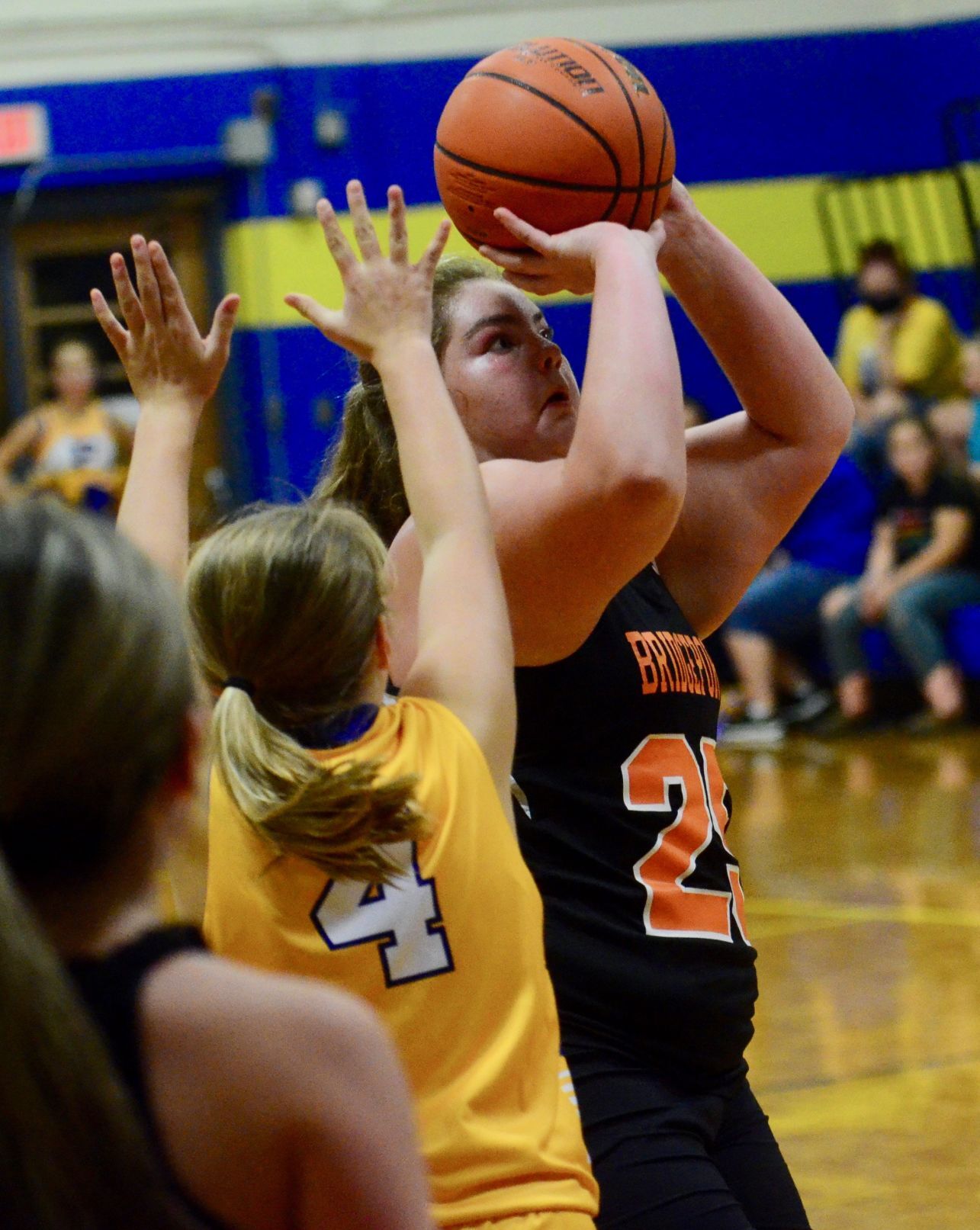 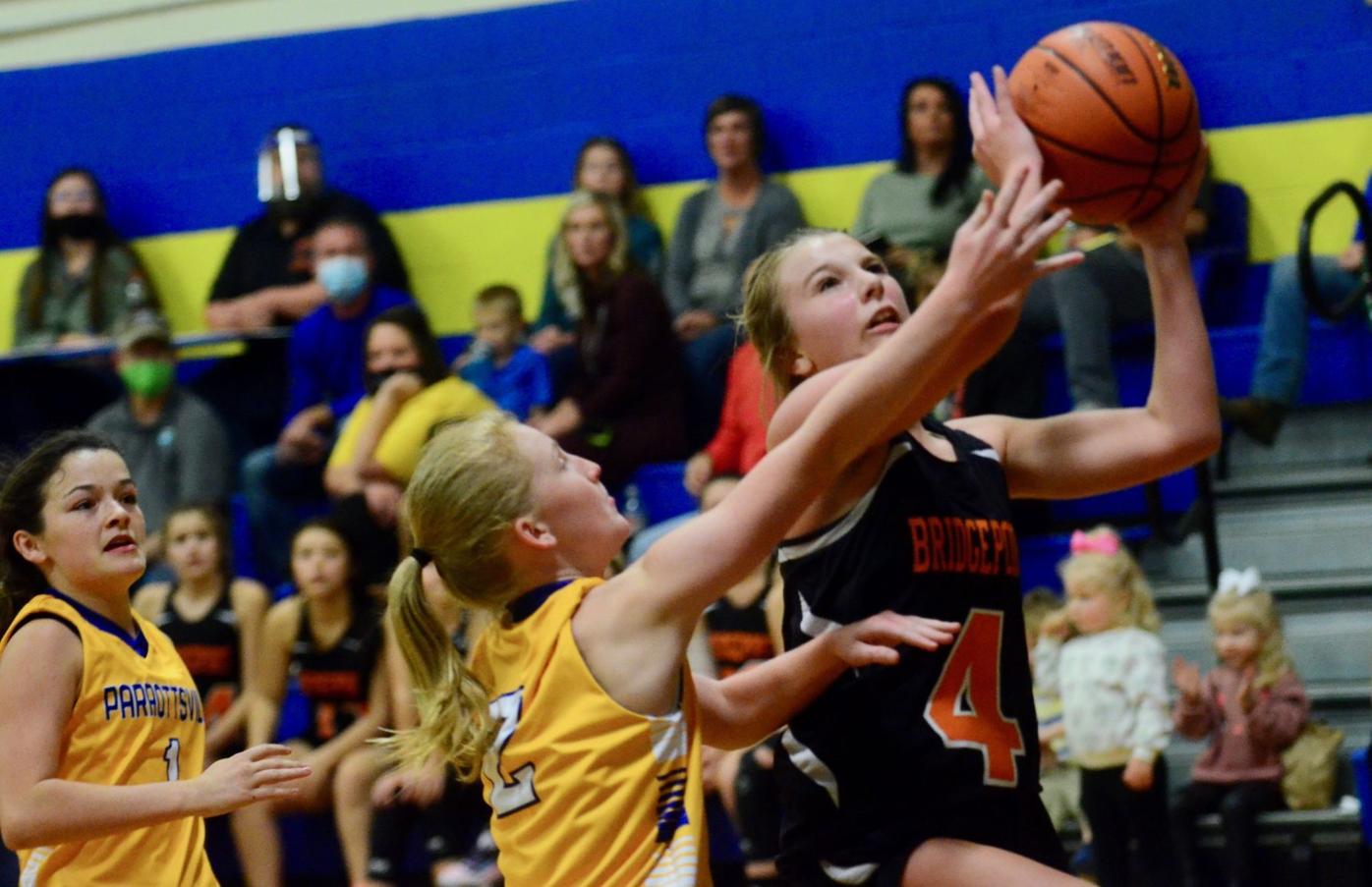 Bridgeport’s Madylyn Bible (right) goes up for a layup in transition while defended by Parrottsville’s Cee Gee McNealy (center) on Thursday night.

Bridgeport’s Madylyn Bible (right) goes up for a layup in transition while defended by Parrottsville’s Cee Gee McNealy (center) on Thursday night.

PARROTTSVILLE—Taking center stage in a matchup that always ranks among the best of the season, Parrottsville and Bridgeport split contests in Thursday night elementary basketball action.

While the Lady Parrotts were successful in remaining unbeaten, the Bridgeport Rockets knocked off the Parrotts of Parrottsville on their home floor.

Edgemont returned to action for the first time since the first week of the season, and had a successful comeback. Both the Panthers and Lady Panthers came away with victories over Del Rio.

More elementary basketball action dominates the schedule next week, as the season rolls on into the fourth week of the 2020-21 campaign.

With a strong first-half effort, the Parrottsville Lady Parrotts went on to grab a 36-24 victory over the Bridgeport Lady Rockets on Thursday.

Adisen McNealy led all scorers with a game-high 17 points for the Lady Parrotts. Bridgeport was led in scoring by Madylyn Bible’s 12 points.

Parrottsville opened the game with a 12-6 lead at the end of the first period, and opened up the lead with a 23-11 advantage at the half.

The Lady Parrotts continued to expand their lead in the second half, taking a 32-15 lead into the fourth before going on to secure the 12-point win on Thursday.

Holding serve in a high-scoring second half, the Bridgeport Rockets held off a late charge from the Parrottsville Parrotts to knock them off on their home floor, 46-41, on Thursday night.

The Rockets were led in scoring by Raeshon Palmer’s game-high 14 points. Zander Ball joined him in double figures with 13 points.

Parrottsville was led in scoring by Donovan Ramsey’s 12-point effort.

Bridgeport held Parrottsville to just eight points in the third to take a 25-21 lead into the fourth.

Both teams racked up the points in the final frame, scoring a combined 41 points over the final six minutes. The Rockets were able to hold on, thwarting a comeback effort by the home-standing Parrotts for a five point win on Thursday.

Both teams slogged through a low-scoring first period, with Del Rio leading 2-1. Edgemont would knot the game at 8-8 going into the half.

The Lady Panthers were able to pull ahead to start the second half, taking a 15-13 lead into the fourth. Over the final six minutes, Edgemont doubled up on Del Rio in scoring to take a 14-point win on the road on Thursday.

The Edgemont Panthers used a first-half scoring onslaught to rail past the Del Rio Trojans for a 39-25 win on the road on Thursday.

Haiden McMahan led the Panthers with a co-game-high 20 points. Jerome Cofield joined him in double figures with 11 points.

Edgemont wasted little time racing out to an early lead. The Panthers led 15-5 at the end of the first, and carried a hefty 31-7 lead into the half.

Cofield had all 11 points of his scoring total by the half. Hembree added 14 points, all of which came in the second quarter, alone.

With a large lead in hand, the Panthers rode out the final 12 minutes.

They led 37-16 at the end of the third before putting the finishing touches on a 14-point road win on Thursday.