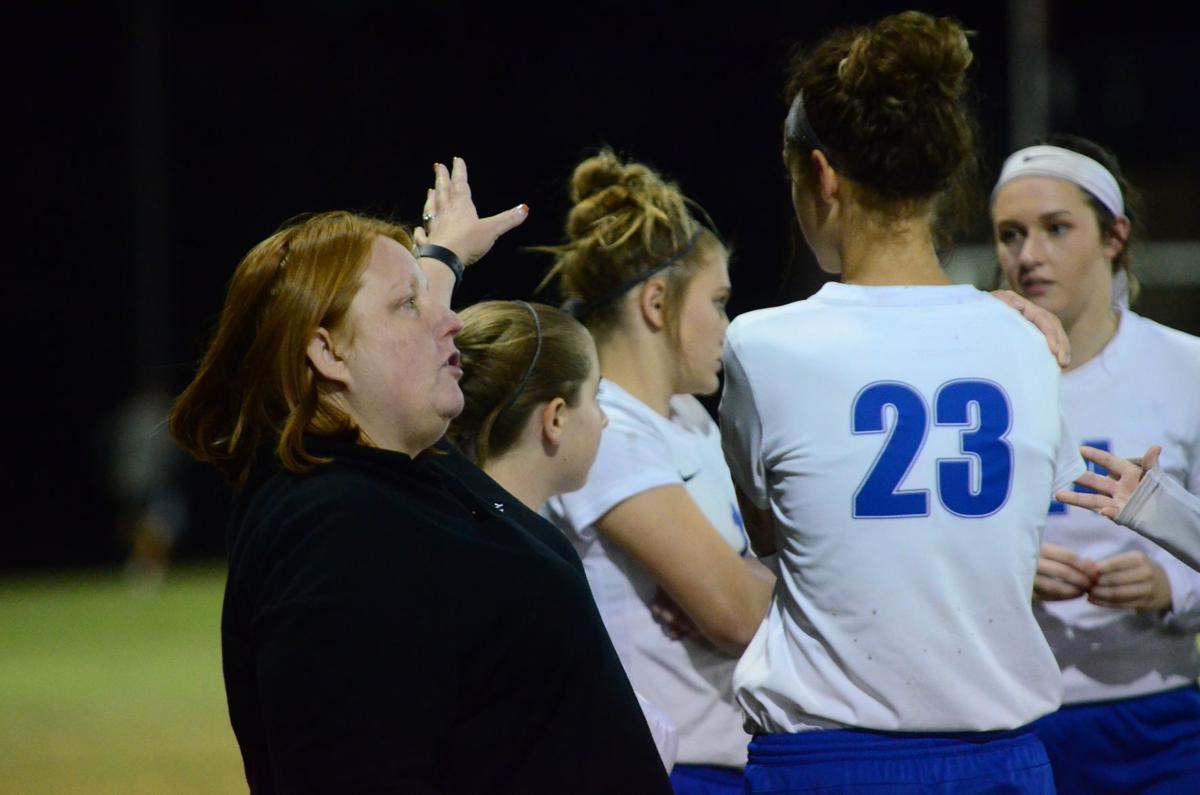 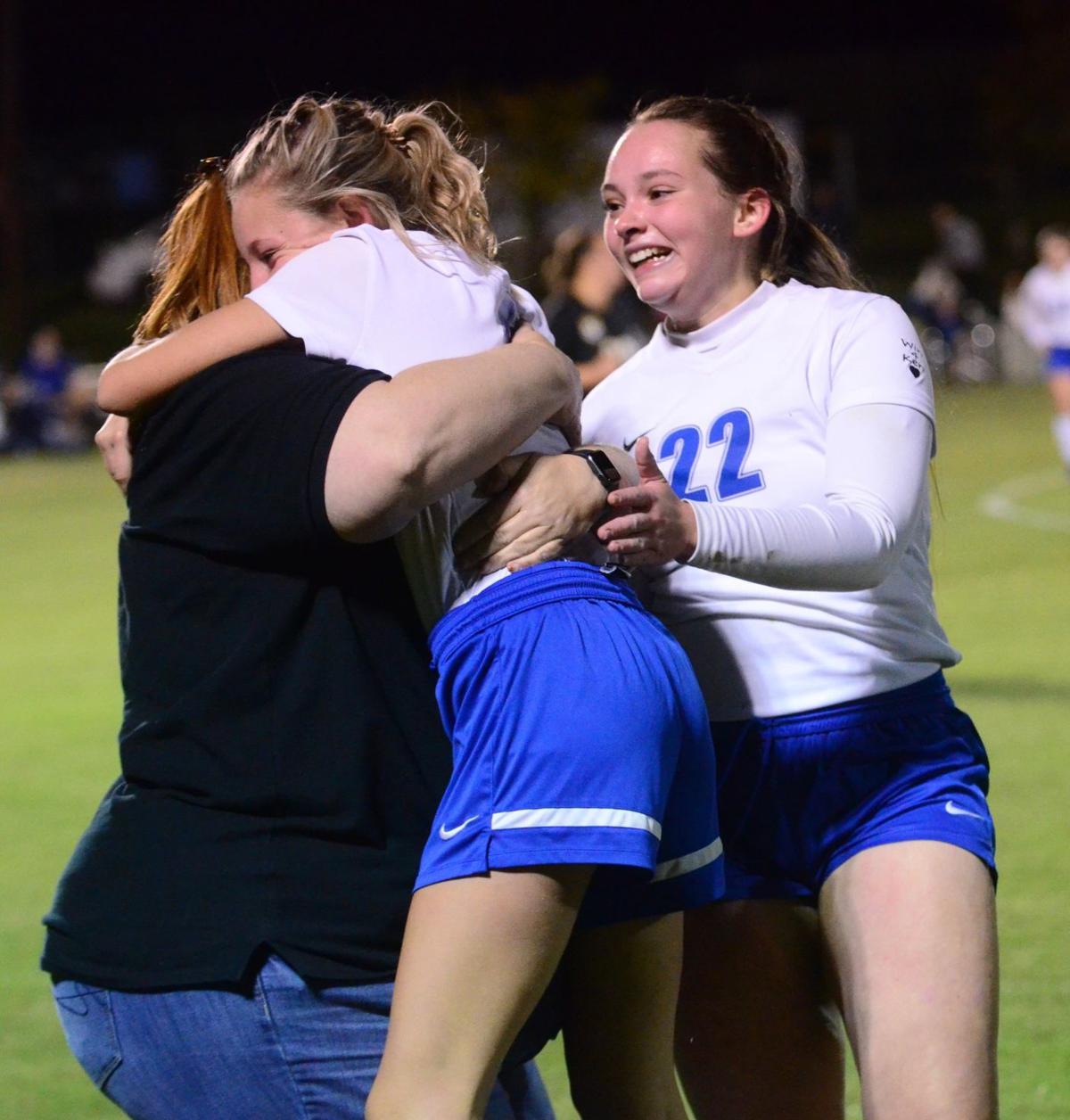 FILE — Cosby coach Michelle Lane celebrates with Macie Mathes (center) and Montgomery Webb (right) after winning in the Region 1-A semifinal round over Chuckey-Doak in 2019. 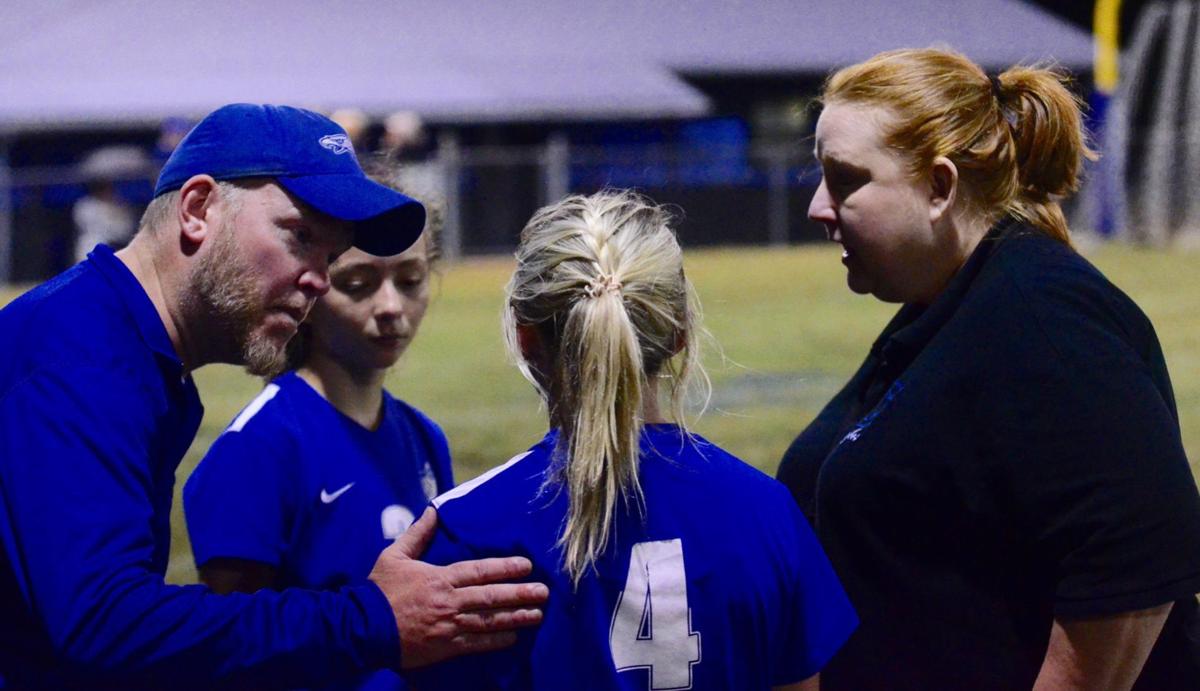 FILE — Cosby coaches James Groat (left) and Michelle Lane (right) talk with Macie Mathes (4) and McKenzie Owen during halftime of the Class A Sectional round against Cumberland Gap in 2019.

FILE — Cosby coach Michelle Lane celebrates with Macie Mathes (center) and Montgomery Webb (right) after winning in the Region 1-A semifinal round over Chuckey-Doak in 2019.

FILE — Cosby coaches James Groat (left) and Michelle Lane (right) talk with Macie Mathes (4) and McKenzie Owen during halftime of the Class A Sectional round against Cumberland Gap in 2019.

COSBY—Everything happens for a reason. That saying is no different for the Cosby High Lady Eagles’ soccer program.

After months of hard work and training, the Lady Eagles realized one of their biggest goals by qualifying for the TSSAA Girls’ State Soccer Tournament that will begin this week in Murfreesboro, Tenn.

“This year has been a dream to be a part of,” Cosby head coach Michelle Lane said. “These girls have worked so hard all year long and it’s so exciting to see them reap the rewards of their labor by accomplishing so many things for the first time in the program’s history.”

The 2019 season has easily been the most successful campaign in program history, and has the opportunity this week to continue adding to the list of gaudy achievements it’s already enjoyed throughout the year.

However, this incredible season was close to not happening.

At the end of last season, Lane was ready to call it a career and put her coaching days behind her. She already had her resignation letter typed up, but thanks to a little persuasion she decided to stick around.

“We work so well together,” Cosby assistant James Groat said. “If we were married, we’d be divorced. But it’s how we work together as coaches that makes this work so well. This team needed her to come back for another year, and without her coming back I’m not sure we’d be in the position we’re in. I’m forever thankful for her decision to come back.”

Lane’s decision to return has obviously paid off. She’s had the privilege of seeing the program through a campaign that’s featured its first region title and a momentous state tournament berth, but the season’s not over.

Win or lose this week, though, Lane has made it no secret that this will indeed be her final season coaching the Lady Eagles.

Green always had a vision for what the program could, and should be. His passion for soccer in the community was unmatched, but his spirit has carried on through Lane and Groat over the last five seasons.

What the Lady Eagles have accomplished in 2019 will always be remembered from an athletics perspective, but Lane insists their legacy should reach far beyond the wins and trophies they compile over the years.

Tom Oates: Packers need to get physical in rematch with 49ers

“I absolutely love to win but it is truly not the most important thing in life,” Lane said. “It comes down to the fact that it’s a game. One team will outscore the other and be declared the winner, but the most important thing is you give your all for your teammates, coaches and yourself. If you leave everything you have out on that pitch, and you have played as a team, then you are a winner no matter the score.

“I hope as the years pass the community remembers these girls and this team not only for their athletic accomplishments, but what they go on to do after that.”

This week, regardless of the outcome, the Cosby Lady Eagles and the Cosby community have a season-long memory to look back on. What the program has accomplished this season should never be taken for granted, as they don’t come around often.

As for Lane, this week is it. No matter what happens in Murfreesboro she will be turning over the program to someone else, so they may see the team thrive through its next chapter just as she has.

“As for my leadership of the program, I hope they say I didn’t do too bad,” Lane said. “A good leader doesn’t pretend to know everything, they surround themselves with the right people. I may not know a lot about soccer, but I sure don’t mind to work hard and I do know about kids. And the most important thing is to love them and set high expectations. Give them the tools they need and get out of their way, they will do the rest.”

The head coaching position wasn’t one she particularly wanted, nor did she feel she was ready for. What would transpire over the last five seasons goes to show that she was meant for this position, though, as she’ll go down as one of the program’s best leaders in school history.

"This team needed her to come back for another year, and without her coming back I'm not sure we'd be in the position we're in."

LOT IN CITY OF MORRISTOWN