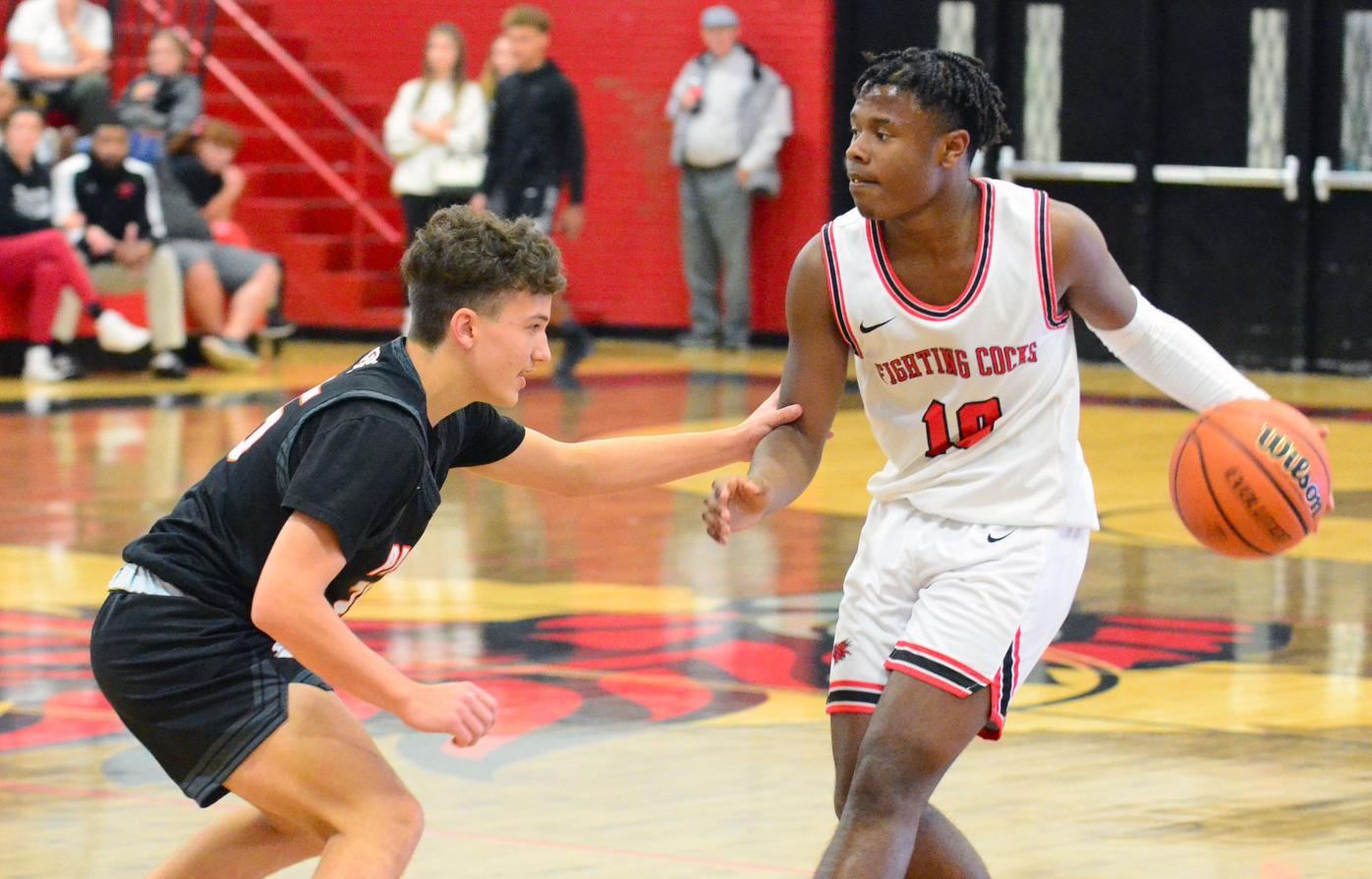 Cocke County’s Brazen Stewart brings the ball up court guarded by a Pigeon Forge defender. Stewart scored seven points in the game to help the Big Red secure a 53-47 victory. 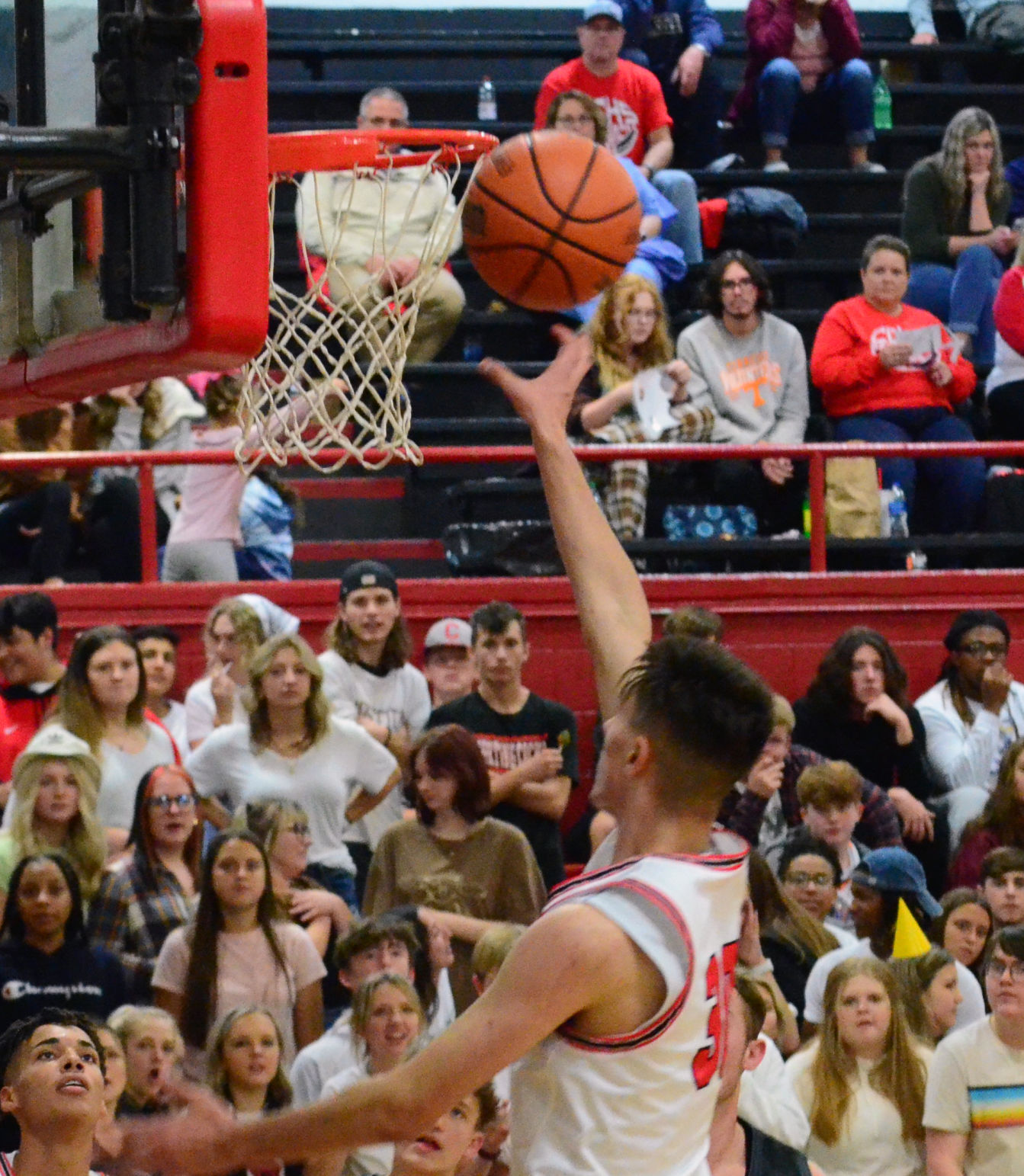 CCHS freshman Kyler Hayes puts a shot up and off the glass for two in the Fighting Cock’s victory over Pigeon Forge. 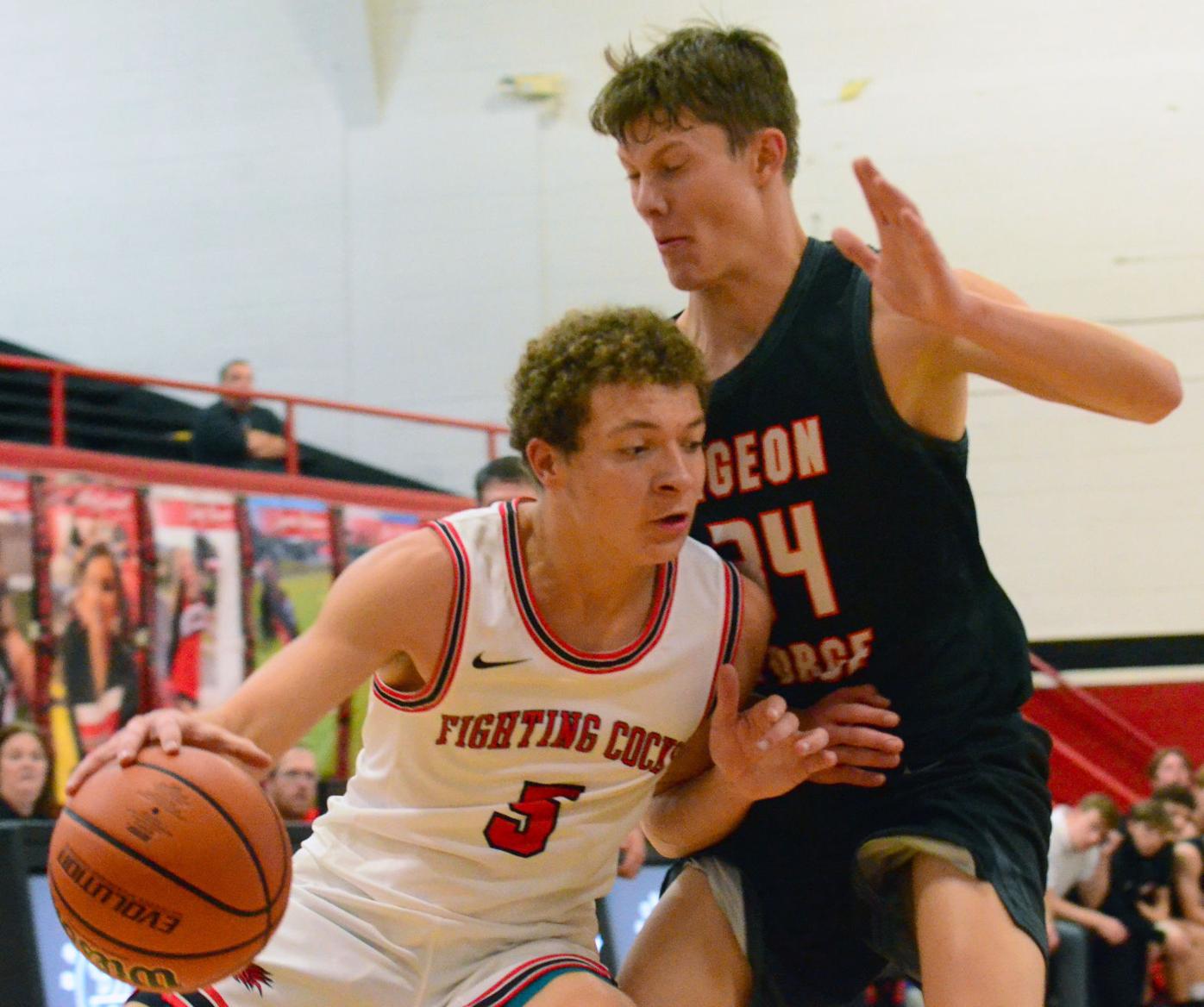 Cocke County’s Brazen Stewart brings the ball up court guarded by a Pigeon Forge defender. Stewart scored seven points in the game to help the Big Red secure a 53-47 victory.

CCHS freshman Kyler Hayes puts a shot up and off the glass for two in the Fighting Cock’s victory over Pigeon Forge.

NEWPORT—The Fighting Cocks took the court Tuesday evening in their first game of the season. The visiting Tigers of Pigeon Forge met them on their home floor. The Big Red won the closely contested game by a final score of 53-47.

Baylor Baxter set the pace early for the Fighting Cocks scoring seven points in the first quarter. Not to be out done was the Tigers’ Aidan Lacey, who scored eight points in the opening frame.

Five other members of the Big Red team knocked down shots in the first quarter, including 3-pointers from Brazen Stewart and Major Woods.

It was a slim margin for the Fighting Cocks as they found themselves ahead by only three after the first period of play.

They found an offensive groove midway through the second quarter as Lakkin France found the bottom of the basket on two occasions, as did freshman Kyler Hayes. The defense was also a factor in the period, which was one of head coach Casey Ragan’s major concerns coming into the game.

“For the most part, I thought we played well,” Ragan said.

“My concern was on the defensive end, but we ended up holding them to just 47 points, which I can’t complain about. The guys locked in and I was pleased with that. We need to get better rebounding the basketball, but that will come with time.”

The strong run to end the second quarter put the Fighting Cocks up 35-26 going into the locker room.

The second half of the game was marked by momentum swings, the first of which shifted towards the Tigers. Baskets by Holt Hensley and multiple shots at the charity stripe had the Tigers back in the game. Cocke County’s offense went cold in the period only managing four points. The Fighting Cocks’ lead had been trimmed to three by the end of the third, up 39-36.

The runs and streaks continued as the fourth quarter of play began. CCHS jumped out quickly thanks to baskets by Jordan Woods and Baylor Baxter.

They never found a comfortable moment though, as the Tigers managed to pull within two points midway through the period.

Major Woods stepped up and knocked down a huge 3-pointer to put the Big Red up by five. For the remainder or the game the Tigers never came closer than four points to the Big Red.

Coach Ragan said his team needs to sustain their runs on offense when given the opportunity.

“I thought we had three or four chances in the game to put it away but we didn’t,” Ragan said. We were up by eight, nine or ten and they would cut it three or four. Then we would be up seven or eight and they would cut it to two or three. Basketball is a game of runs and we need to learn to sustain ours a little longer. We had control most of the game but didn’t finish it when we should have.”

Ragan said his team’s shooting needs to improve as they move forward. He was pleased with the contribution that several of his players made coming off the bench.

The Fighting Cocks will play two games on the road Saturday morning as they battle Sullivan East and Tennessee High. They will play in a Thanksgiving week tournament before returning home to play the Mountaineers of Tuscola High School on Tuesday, November 30.