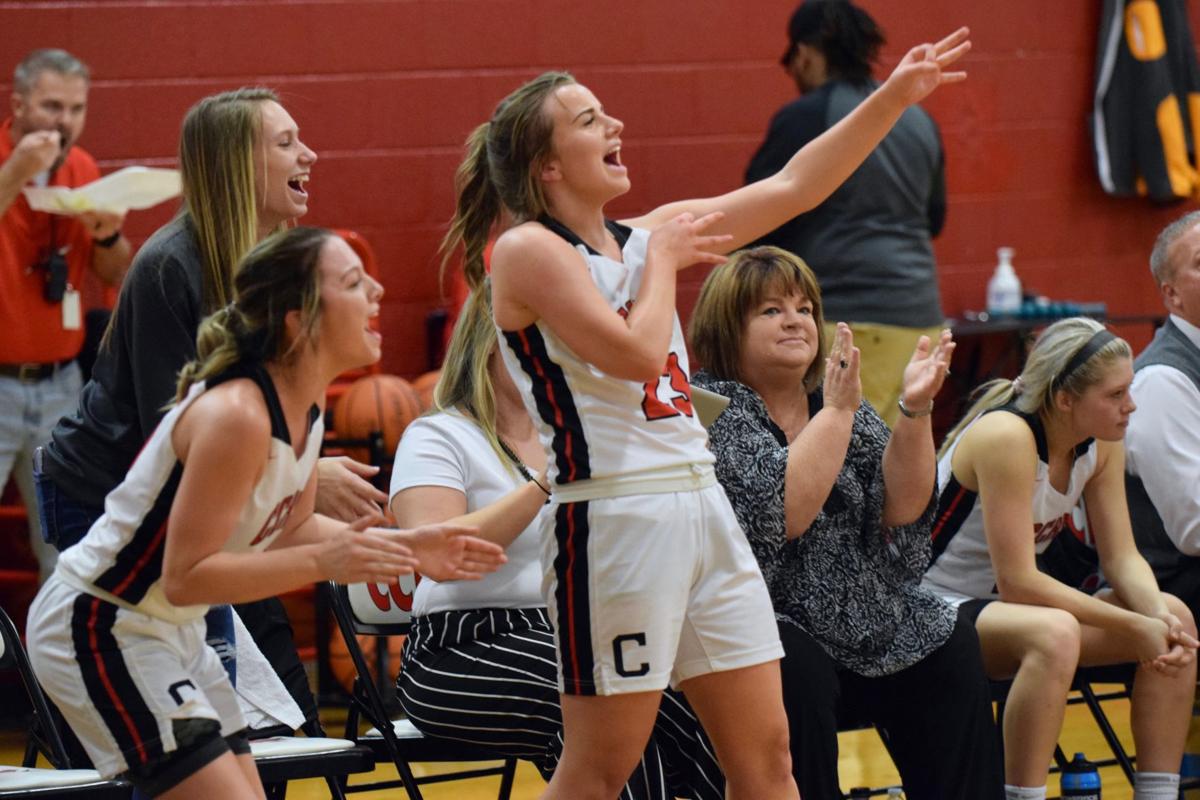 Cocke County sophomores Sydney Clevenger (left) and Camryn Halcomb celebrate from the bench during the Lady Red’s victory over Morristown East on Friday. 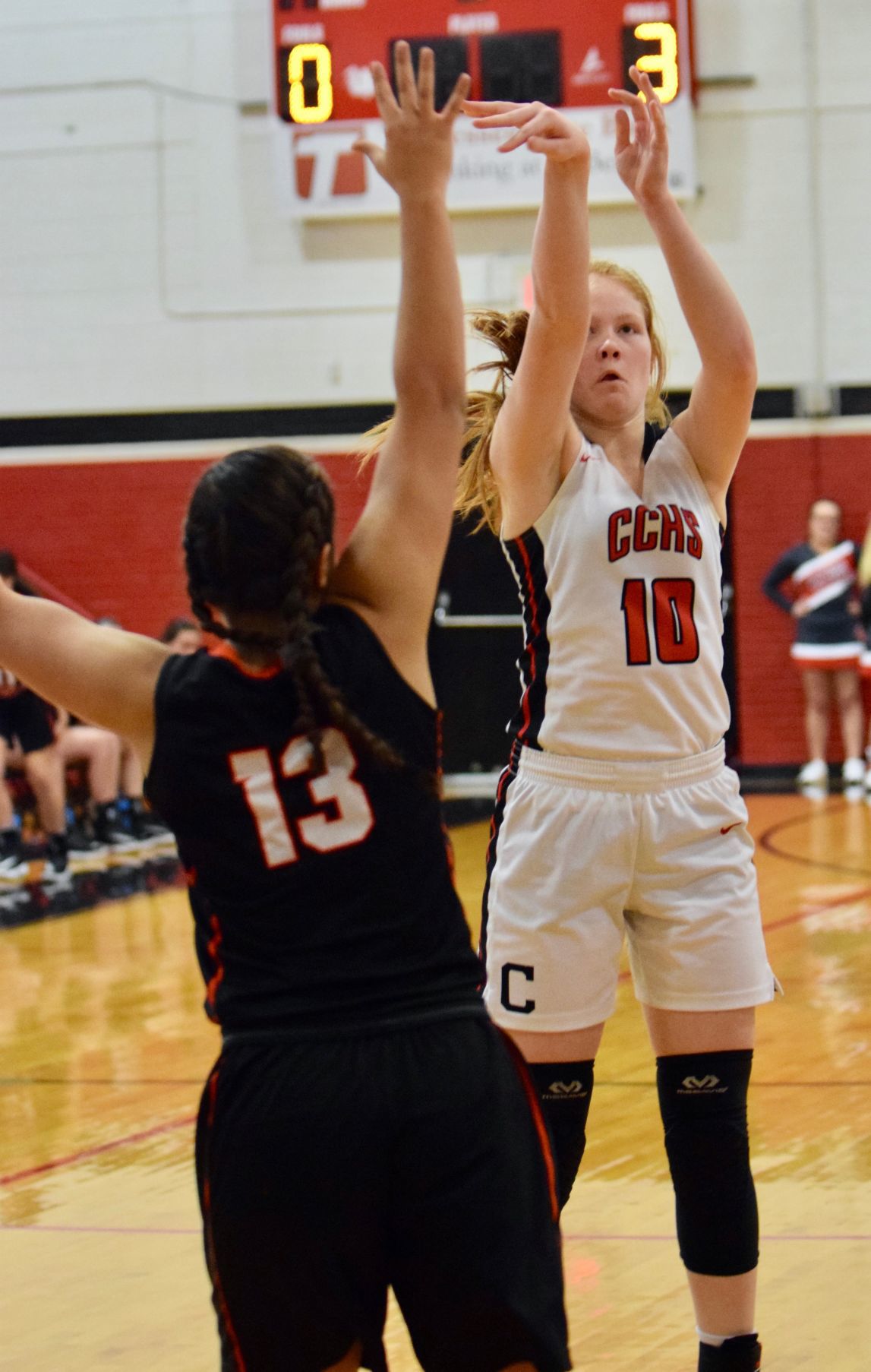 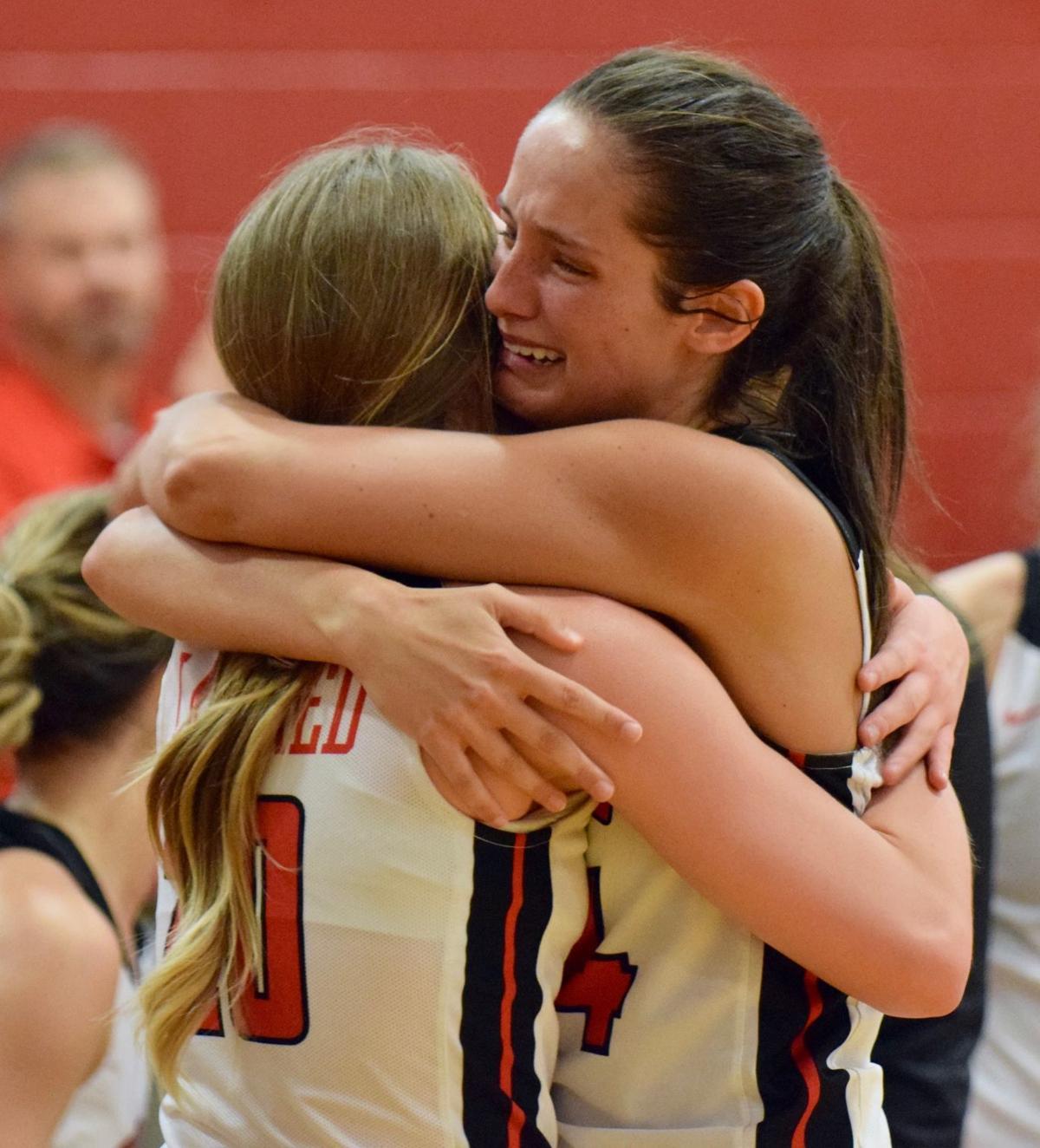 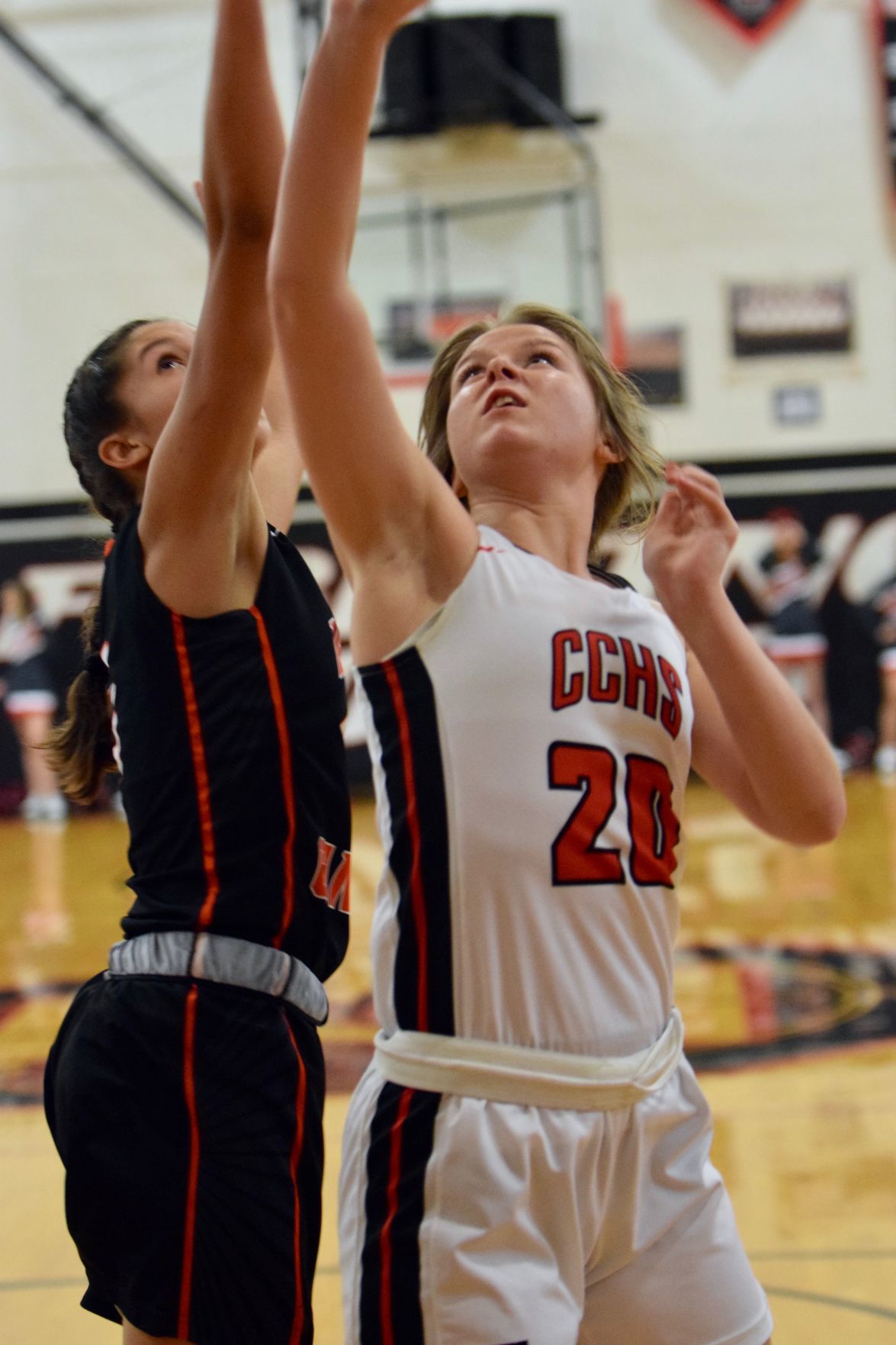 Cocke County senior Hailey Moore (right) goes up for a shot in the paint during Friday’s District 2-AAA victory over Morristown East.

Cocke County sophomores Sydney Clevenger (left) and Camryn Halcomb celebrate from the bench during the Lady Red’s victory over Morristown East on Friday.

Cocke County senior Hailey Moore (right) goes up for a shot in the paint during Friday’s District 2-AAA victory over Morristown East.

Not only that, the Lady Red are bound for the Region 1-AAA tournament as well — also the first time since 2013.

Moore found her way into the scorebook on a fourth-quarter putback, building a 56-24 cushion. And after the final horn sounded, she emerged from the CCHS locker room proudly sporting the “Lady Red Hustle Champion” belt. And don’t expect her to take it off anytime soon.

“I try every single night to do my best to help my team,” Moore said. “The honor of getting the belt tonight, it means a lot to me that I could receive it on my senior night of all nights. You don’t have to be the scorer or getting all the deflections. As long as you’re out there having fun making things happen for your team, not just yourself, that’s what that means for me.”

Camryn Halcomb led Cocke County (15-11, 8-4 District 2-AAA) with 17 points, and Sydney Clevenger scored 15. The two played a pivotal role as the Lady Red seized firm control with a 34-0 run. Clevenger gave Cocke County its first points on a layup, and she hit a transition layup and a putback for a 17-16 CCHS halftime lead.

That was just the beginning, as Clevenger added another steal-and-score in the third quarter before burying two 3-pointers. Her second triple ended the run and gave Cocke County a comfortable 45-16 advantage. In fact, the Lady Red held Morristown East (11-15, 2-10) scoreless for 9:29, a drought which began in the second quarter and ended with 1:51 in the third.

Baxter, who twice finished in the paint during the second quarter, did so again late in the third. By then, the Lady Red had built a commanding 47-18 lead which became 47-20 just before the fourth.

“These have been the best four years of my life,” Baxter said. “You don’t realize how fast it goes by until you actually live it. The majority of our team is real young. If they’re working this hard right now, I feel like they’re going to have a great future. It makes me proud of them knowing when I leave, they’re still going to hustle and push themselves just as hard.”

Jaylen Cofield’s 3-pointer gave CCHS its 12th consecutive point and a 23-16 lead early in second half. Gracie Gregg and Halcomb both converted layups, often after a Morristown East turnover. In fact, Halcomb stole the ball on consecutive East possessions, hitting a pull-up jumper and a layup to make it 40-16. Cofield equaled Baxter with 7 points.

Just moments after Halcomb buried a 3-pointer to begin the fourth, Paige Niethammer hit a 12-foot jumper and a fast-break layup for a 54-22 lead. Jayda Harden added another 3-pointer before Niethammer’s layup, her third bucket of the fourth quarter, made the score 61-24.

“We got a little more disciplined on defense (in the second half),” CCHS coach Jeremy Byrd said. “The last two days in practice have been fantastic and that carried over on the court tonight.”

The win snapped a three-game skid for the Lady Red, who swept Morristown East for the second consecutive regular season. Sevier County’s district loss to Jefferson County ultimately assured CCHS of the No. 2 tournament seed.

And the triumph gave CCHS a measure of revenge as the Lady ‘Canes had ended Cocke County’s 2018-19 season with a 65-50 district tournament upset win. On Friday, Byrd gladly listened when an assistant coach advised him the Lady Red should press. Clearly, it didn’t take long to pay off.

“This is the best team game we’ve played all season; everything I called it seemed like they were executing,” Byrd said. “We started forcing them into turnovers and we just stuck with (the press). I looked up and it was 40-16…I was like wow, that’s what we can be. Our energy kept getting higher and higher and we were just flying around.”

Sable Burnside led the Lady Hurricanes with 12 points, scoring both of East’s third-quarter baskets and hitting a floater in the fourth.

East grabbed the early lead thanks to two turnovers, as Kierstin Bell and Burnside converted steals into baskets. Gregg put back a miss to help CCHS tie the game 7-7 after one quarter.

The Lady ‘Canes then opened a 12-7 lead in the second quarter. Devasia Kyle followed Megan Winstead’s layup with a straightaway 3-pointer. Burnside’s layup and Lindsey Winstead’s long two-point shot made it 16-11 before CCHS scored the half’s final six points.