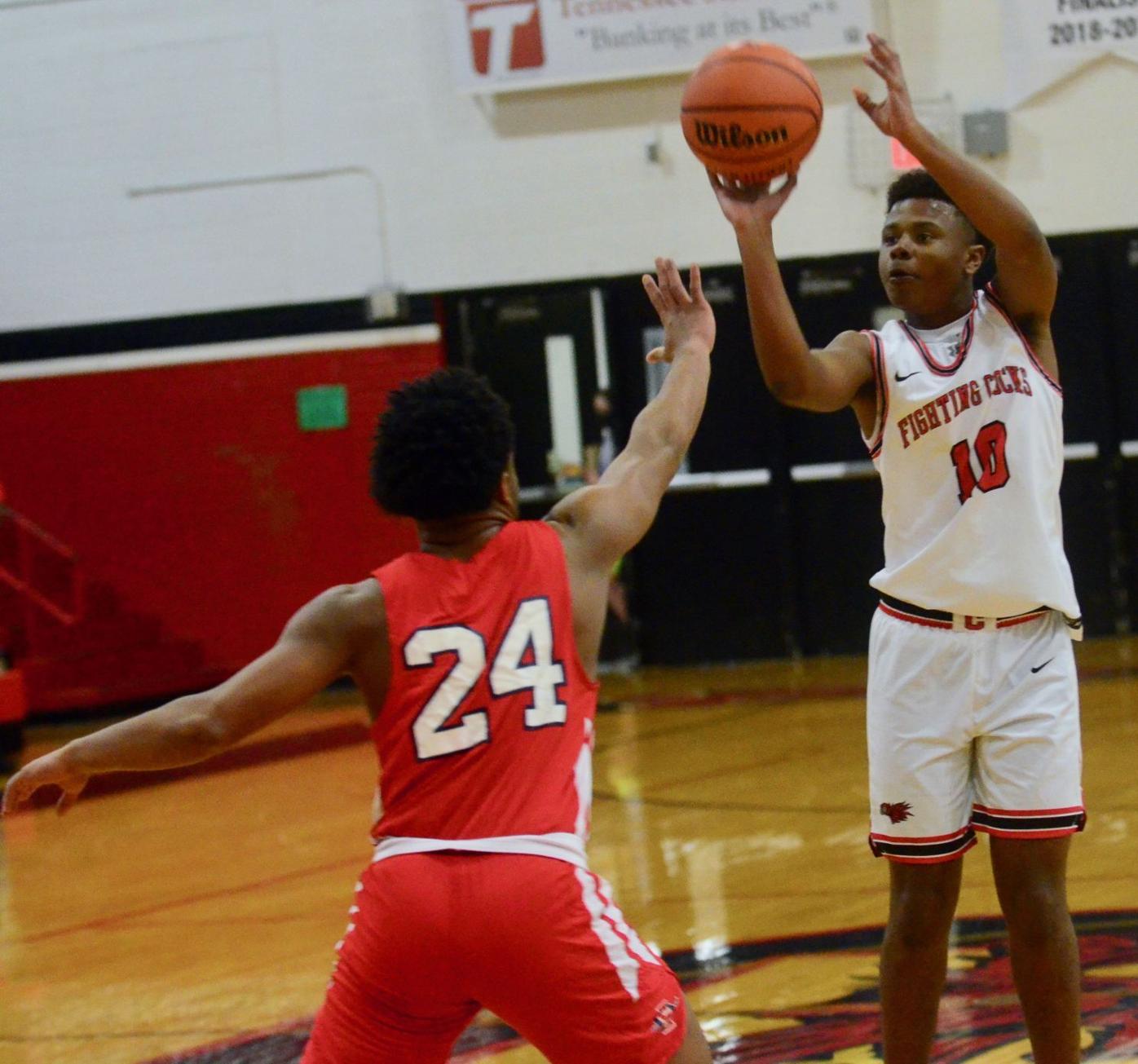 CCHS sophomore Brazen Stewart puts up a shot from the top of the key during Tuesday’s matchup with South-Doyle. 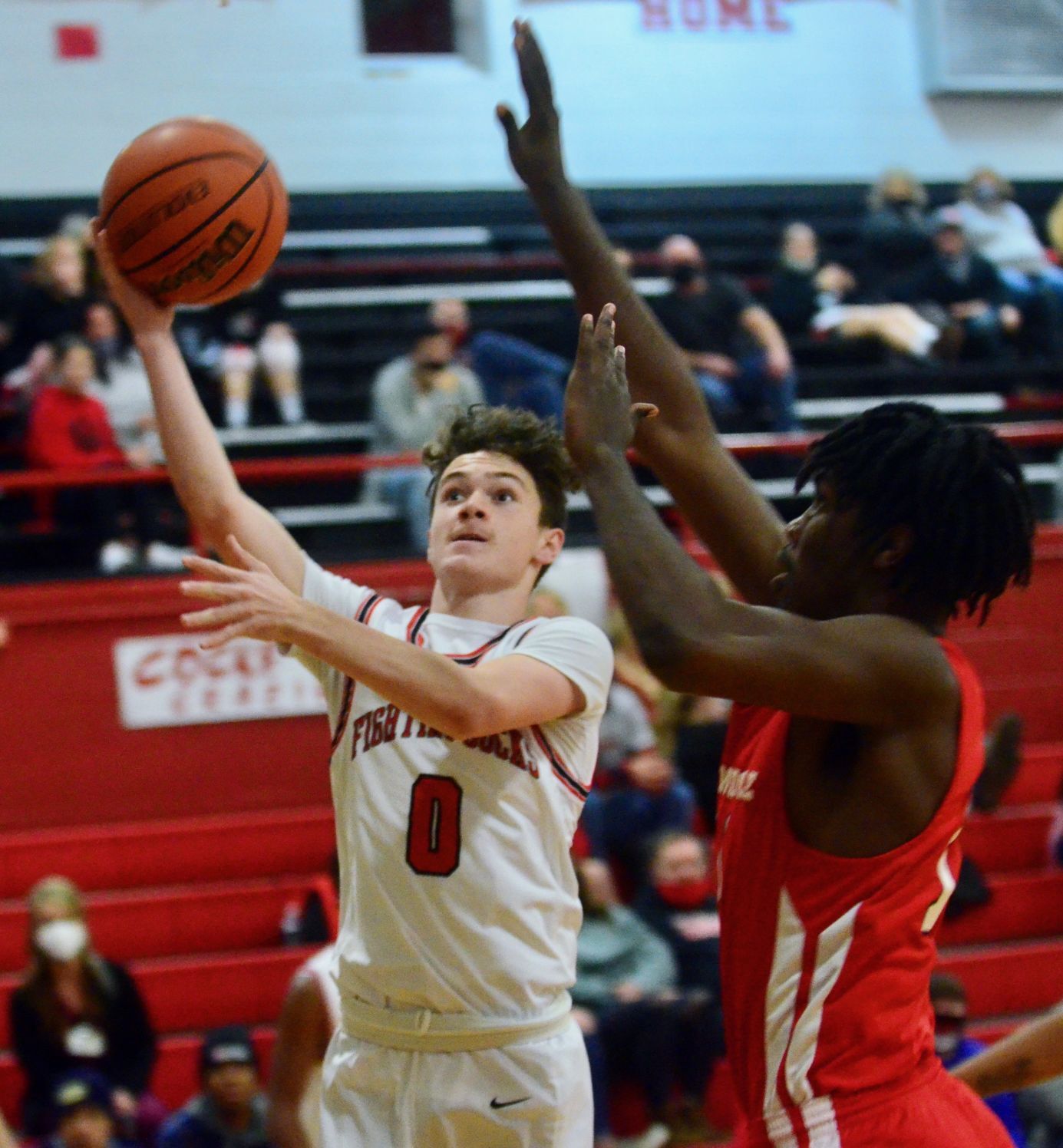 Cocke County sophomore Major Woods goes up for a layup in the lane during Tuesday’s matchup with South-Doyle. 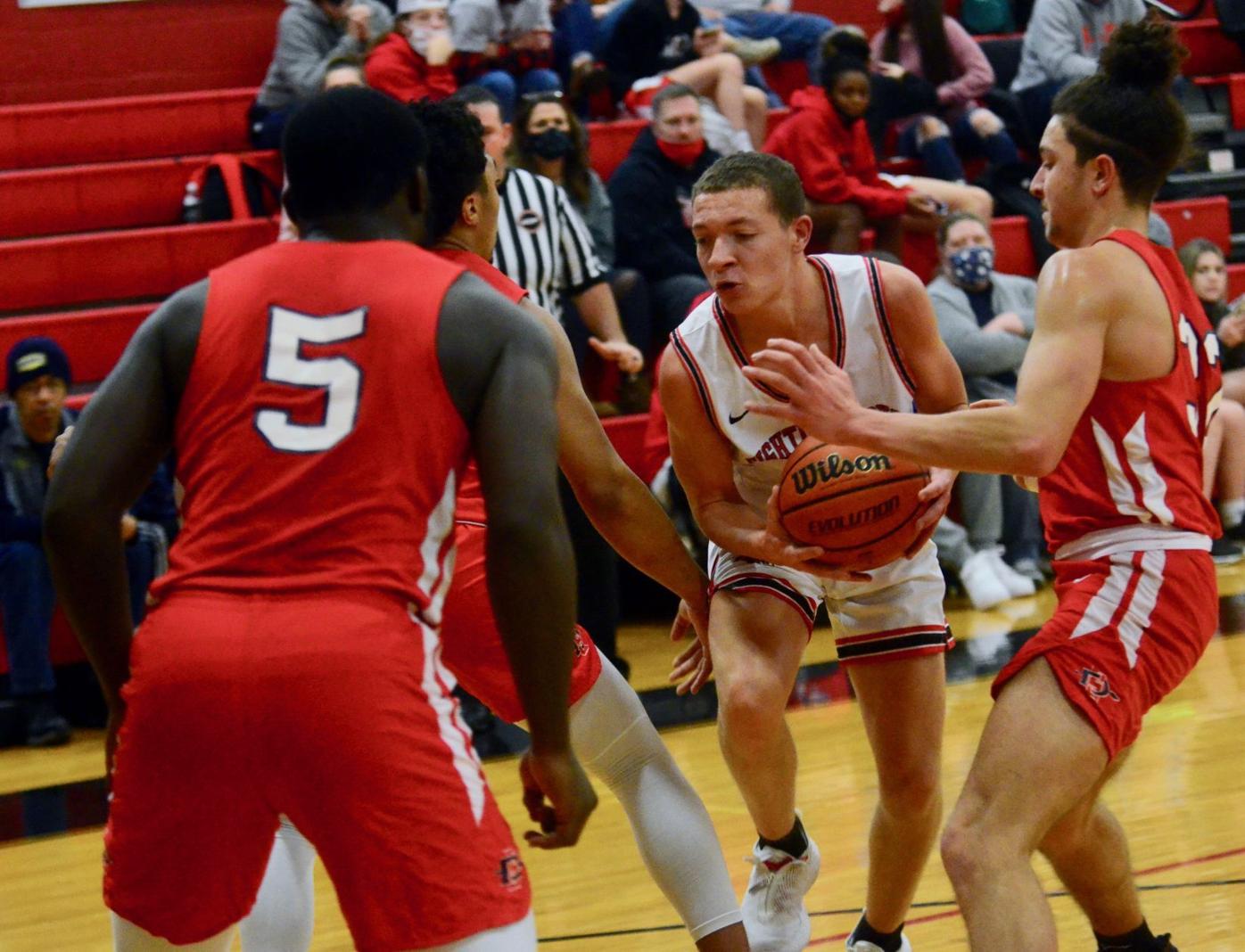 Fighting Cocks sophomore Lakkin France is boxed in as he drives the lane Tuesday against South-Doyle. 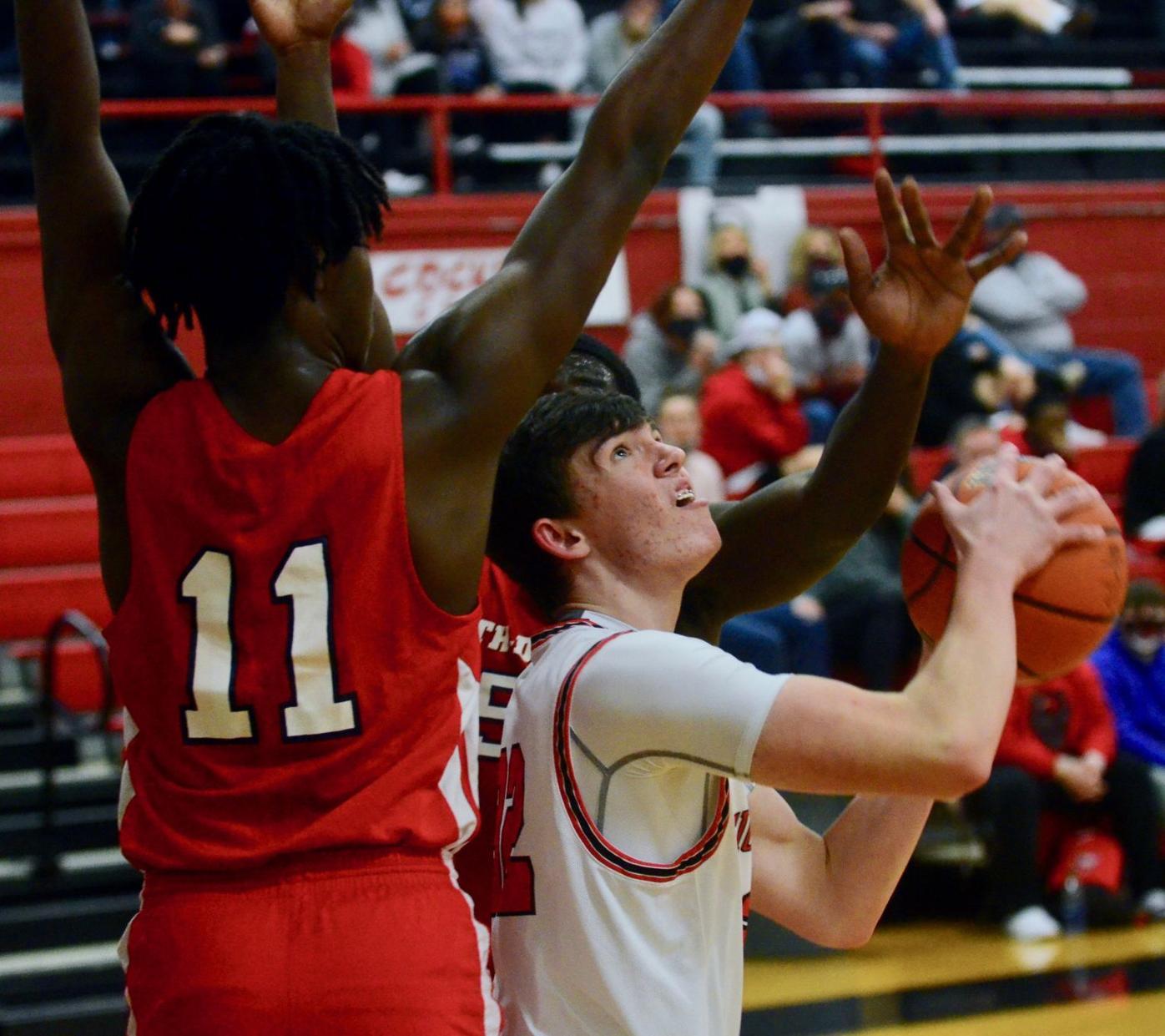 CCHS sophomore Colin Askew eyes the basket from the low block during Tuesday's contest with South-Doyle.

CCHS sophomore Brazen Stewart puts up a shot from the top of the key during Tuesday’s matchup with South-Doyle.

Cocke County sophomore Major Woods goes up for a layup in the lane during Tuesday’s matchup with South-Doyle.

Fighting Cocks sophomore Lakkin France is boxed in as he drives the lane Tuesday against South-Doyle.

CCHS sophomore Colin Askew eyes the basket from the low block during Tuesday's contest with South-Doyle.

NEWPORT—Looking to take the next step forward, the Cocke County Fighting Cocks are starved for consistency right now.

On Monday, the team picked up a much-needed win on the road at Pigeon Forge. However, in just a 24-hour turnaround the Fighting Cocks were left with defeat, a 68-58 loss at the hands of District 2-AAA foe South-Doyle.

“We talked a week ago about how badly this team needed a win,” CCHS coach Casey Ragan said. “So to get one on the road like we did at Pigeon Forge was huge. It wasn’t pretty, but it was a win that we desperately needed.

“Coming into this game, I was a little worried about our legs just because we expended so much energy the night before. I still thought we battled hard, but we still have things to work on, which is normal for most everyone given the way this year has been.”

“We went through a spell where we didn’t have an answer for them,” Ragan said. “Part of that was from them making so many outside shots, and forcing us to go man-to-man. By doing that we didn’t always have help side defense in position, which gave them a free run to the rim.”

Tuesday’s outing was the first meeting between the two programs this season, and just the seventh time all season the Cherokees had taken the floor in 2020-21. With little to go off of, and a short turnaround added on, CCHS was left with an uphill battle to begin with before Tuesday’s matchup ever tipped off.

“I was anxious to see how we handled this one,” Ragan said. “We didn’t know a lot about South-Doyle coming in. They haven’t played many games this year and have a new coach. We also have a bad habit of feeling games out early, which leads to us getting down early and putting ourselves in a hole we can’t crawl out of.

“Tonight, I thought we played hard from the beginning. They had a couple of runs that still hurt, but we’ll learn from that.”

Cocke County had three players finish in double figures. Keaston Jackson led the team in scoring for a second consecutive night, as he finished Tuesday night’s loss with a game-high points total of 17.

“Keaston has done very well this last week,” Ragan said. “We need that. He’s a guy we rely on to do a lot of things. Especially in the post. Tonight he was undersized compared to them, but he still does a good job with positioning and allowing himself a chance to succeed even when he’s outsized. Tonight was another example of that.”

Joining him in double figures were Major Woods and Jody Swann, each of which finished the night with 10 points apiece.

South-Doyle had four players finish in double figures, led by a 15-point effort from D.J. Bradley.

Tuesday’s contest opened with a hectic back-and-forth pace that favored the Cherokees.

South-Doyle jumped ahead early, making good use of the 3-point arc. As a team it buried four shots from 3-point range, helping it take an 18-11 lead at the end of the first.

“We knew we wanted to come out in a zone,” Ragan said. “Playing a team that’s bigger, faster and stronger like that, we’ve got to equal it out somehow. They started hitting more shots from the perimeter than we expected, though, and we weren’t rotating over like we needed to close out on their shooters.”

Cocke County was held scoreless through the first four minutes, and had to battle for every shot it got off due to South-Doyle’s smothering man-to-man defense. The Cherokees left little room to work for CCHS ball handlers, which led to an increased amount of turnovers from the Big Red in the opening frame.

With a quick spark from Jody Swann, who was absent in Monday’s win over Pigeon Forge, the Fighting Cocks were within two points of the lead with just over five minutes left in the first half.

South-Doyle changed its offensive philosophy midway through the second frame, though. The Cherokees slashed to the basket more, finding more success underneath the basket. The payoff was a 9-0 run in a minute-and-a-half span that extended its lead to 31-20 with just over three minutes left in the half.

“We switched up to man to try and close out better, but also keep them off the boards,” Ragan said. “Coming out in a 1-3-1, we gave up too many backside rebounds and had to correct that. We’re a team that has to scrap to control the boards given we’re as outsized as we are.”

The S-D lead reached 14 points going into the final minute of the half, the largest lead of the night. Woods buried a late 3-pointer to get it back down to 11, but Cocke County continued to trail 37-26 as the game went into the intermission.

The Cherokees opened the second half on a 7-2 run, building their lead to a 16-point advantage in the early minutes of the third quarter.

Swann snapped Cocke County’s scoring drought with a munch-needed 3-pointer. Lakkin France followed with a crucial baseline jumper to rein S-D’s lead back down to 11, 44-33, with under four minutes left in the frame.

That wouldn’t be enough to get the Big Red back within single digits, though.

Instead, South-Doyle went back to pounding the lane, as Terrell Brown took it to the rim on three consecutive possessions to put the Cherokees ahead 50-33 with under two minutes left in the period.

“We went through a spell where we didn’t have an answer for them,” Ragan said. “Part of that was from them making so many outside shots, and forcing us to go man-to-man. By doing that we didn’t always have help side defense in position, which gave them a free run to the rim.”

By the end of the third, S-D had its largest lead of the night with an 18-point, 54-36 advantage going into the fourth.

Within the first three minutes of the fourth, Cocke County had worked South-Doyle’s lead back down to 12. For the next two minutes the Big Red came up with stops on the defensive end, but could not cash in on the offensive end to get any closer.

“We run sets, but it’s more of a read and react offense that we’re still learning,” Ragan said. “That’s why we were able to get back within two, but then they take a timeout and adjust and now we’re having to read and react to that. We’ve just got to start feeling out those adjustments better, and that will come with experience.”

South-Doyle, which was scoreless through nearly the first five minutes of the fourth, finally got a basket to go with 3:13 left, pushing its lead back to 14.

The Fighting Cocks drew as close as 10 points within the lead in the final three minutes, but no closer. The Cherokees were able to maintain their lead down the stretch to finish off the victory over CCHS on Tuesday.

“Overall, we played hard tonight,” Ragan said. “That’s what we need to continue to see. They had multiple opportunities to lay down and quit, but never did. As long as they’ll keep up that fight, we’ll be okay.”