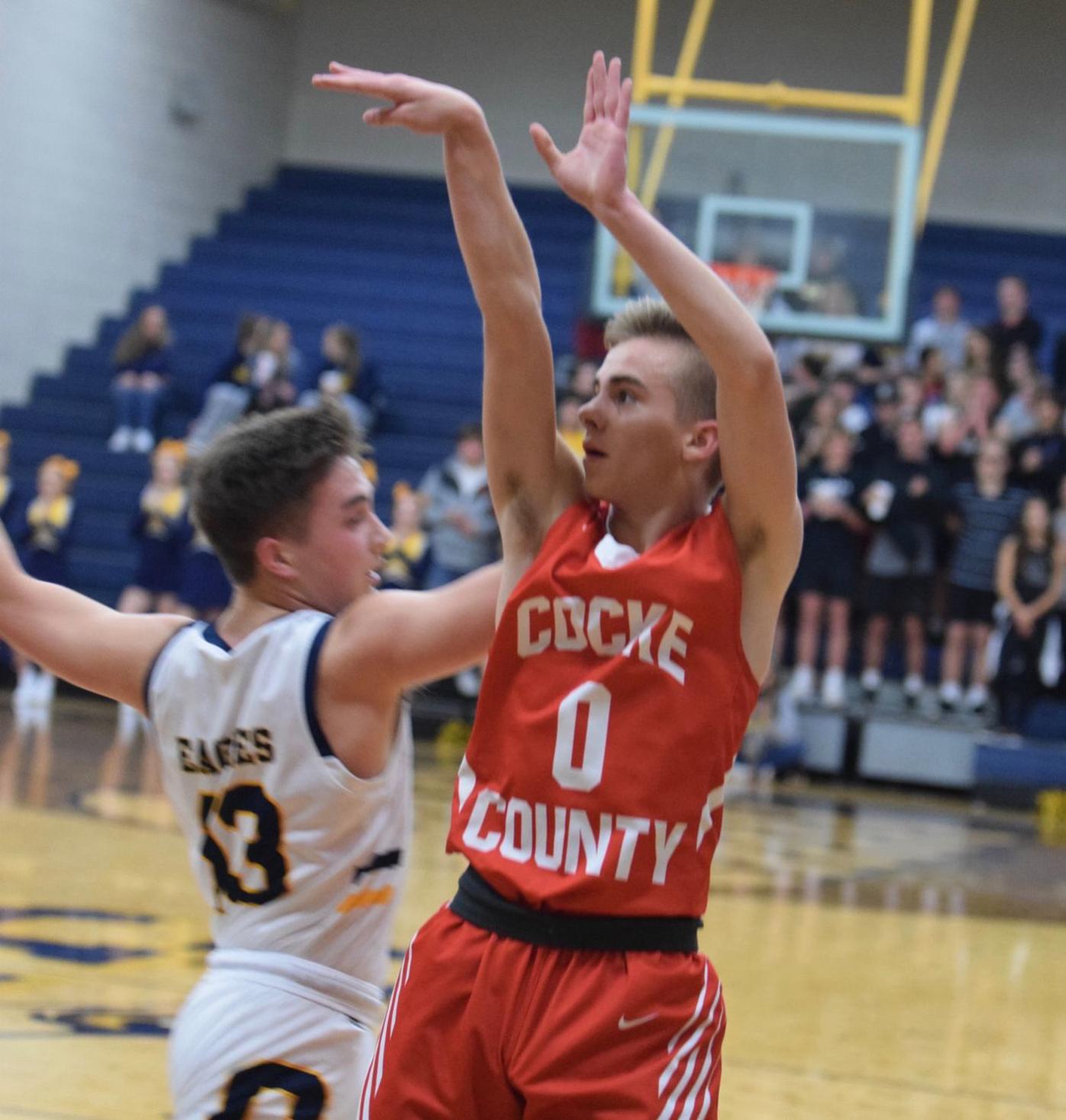 CCHS freshman Hayden Green puts up a shot from the corner during Friday’s win at Seymour. 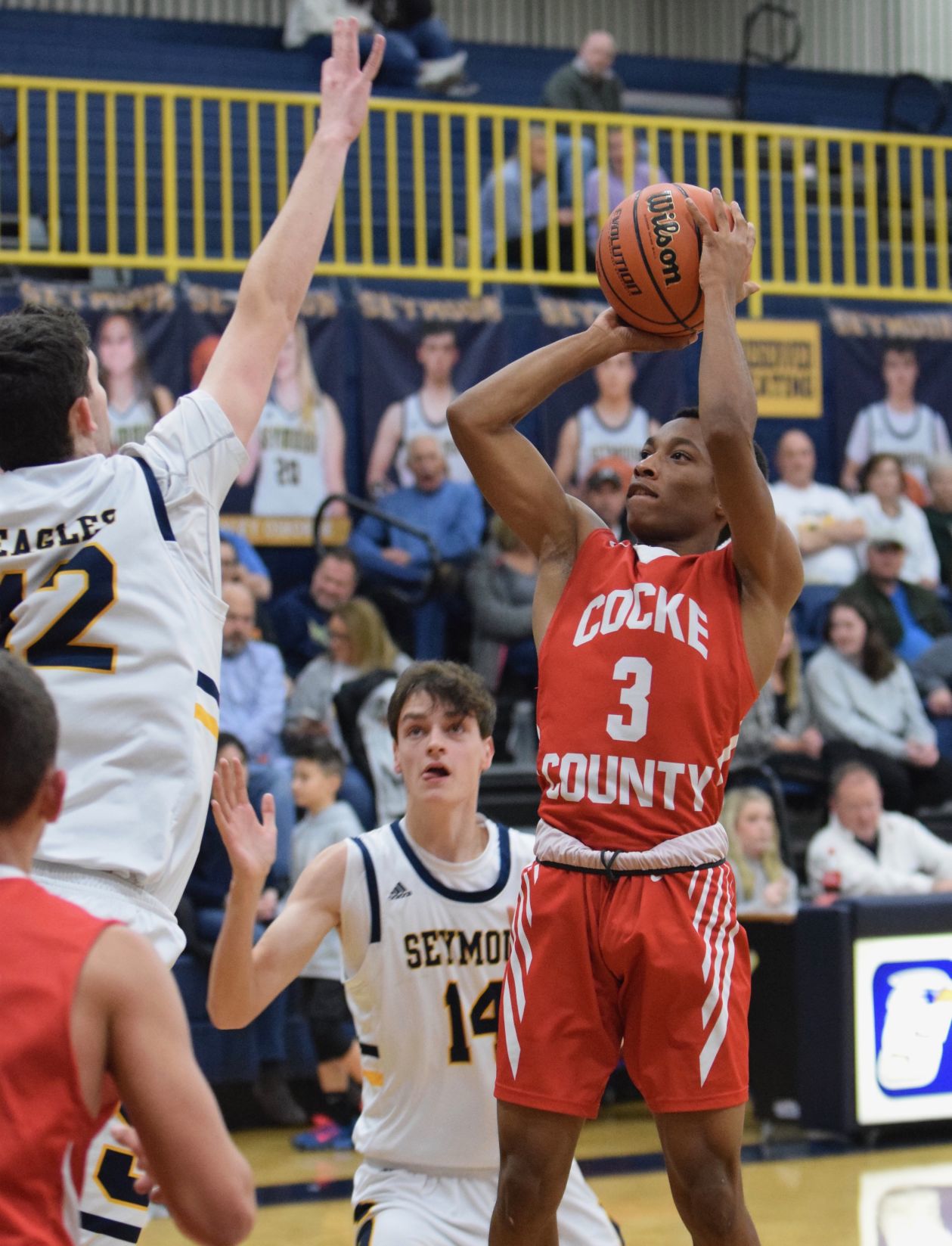 Cocke County senior A.J. Mills puts up a shot over a Seymour defender during Friday’s district win over the Eagles. 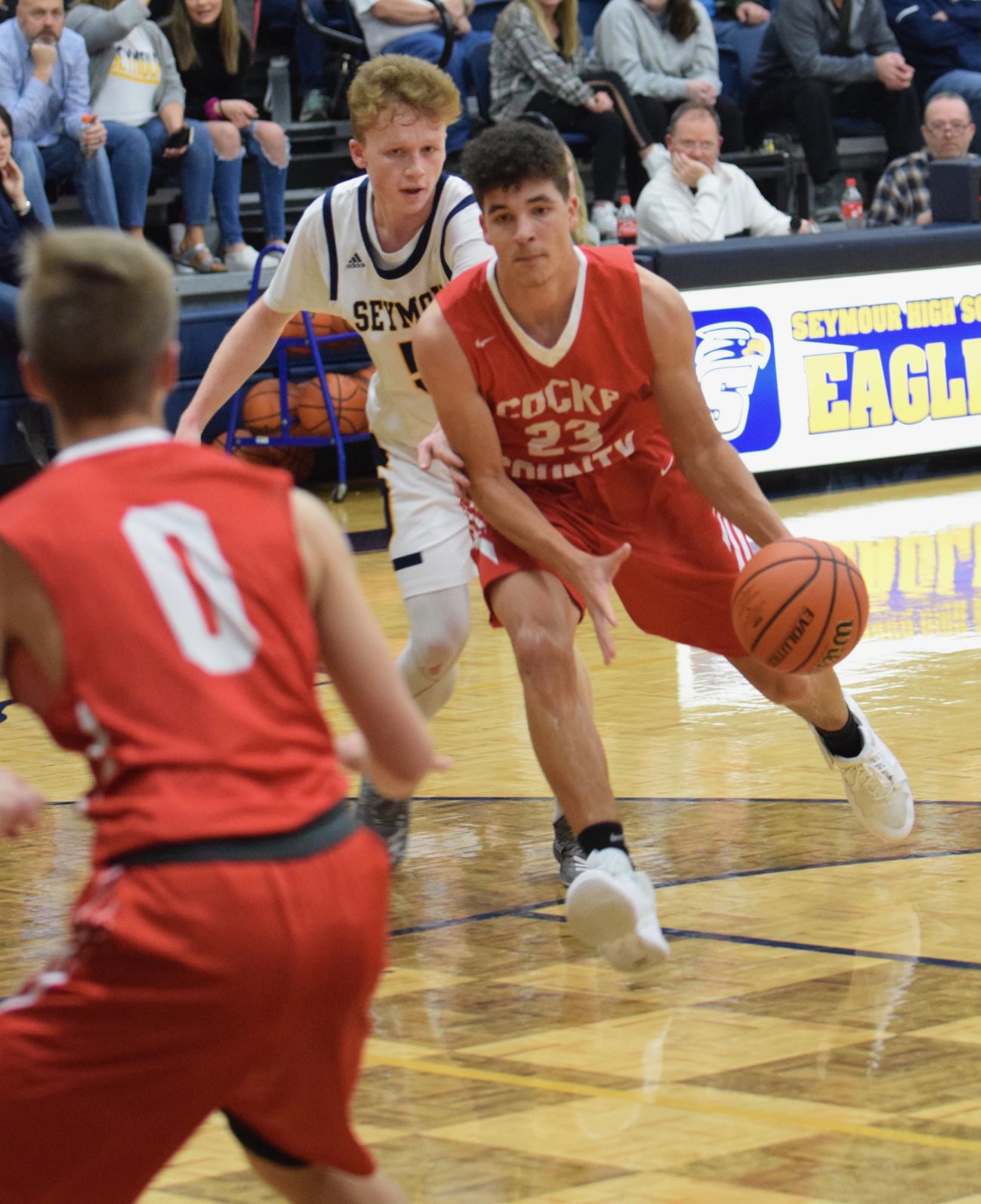 CCHS senior Isaiah Elliott looks to dish the ball to the block during Friday’s District 2-AAA win over Seymour.

CCHS freshman Hayden Green puts up a shot from the corner during Friday’s win at Seymour.

Cocke County senior A.J. Mills puts up a shot over a Seymour defender during Friday’s district win over the Eagles.

CCHS senior Isaiah Elliott looks to dish the ball to the block during Friday’s District 2-AAA win over Seymour.

SEYMOUR—Ray Evans issued a challenge to Isaiah Elliott in practice — Elliott should be one of the top five players in the conference.

More performances like the one he gave on Friday night should take care of that.

Elliott helped Cocke County recover from a slow start, dropping a game-high 19 points as the Fighting Cocks picked up their first district win with a 56-44 triumph at Seymour.

And when the Fighting Cocks (4-7, 1-3 District 2-AAA) allowed eight straight points to open the second half, Elliott embraced his senior leadership role of keeping his teammates positive.

The result — a 22-3 run during which he hit two foul shots to tie the game before burying Cocke County’s third 3-pointer in a two-minute stretch for a sudden 37-31 lead.

“We tried to move the defense a lot by passing it a lot faster and tried to get open shots and 3s because our 3-point shooters got hot late in the game, so we tried to get the defense to crunch in on us and get them open looks,” Elliott said. “Me as a senior, I’m trying my hardest to keep the team together.”

Keaston Jackson scored his first basket with five seconds on the third-quarter clock to make it 39-31 going to the fourth, where he put back a miss through contact for an and-one to cap the run and build a 48-34 advantage.

After hitting one last field goal with a minute remaining for a 54-41 lead, Jackson finished his night with 11 points including a 5-of-5 effort at the foul line.

Hayden Green sparked Cocke County’s late run with his third-quarter triple, and fellow freshman Baylor Baxter followed up a baseline pull-up jumper by A.J. Mills with a pair of layups as CCHS led 45-34. Green finished with 9 points as did Jody Swann, who busted a pair of 3s in the second quarter before his third put the Fighting Cocks ahead for good at 34-31 in the third period.

“Jody has been Mr. Consistency all year and Hayden, he’s settling down a little bit and making better decisions now,” Evans said. “(Seymour) had the matchup zone and it was difficult to figure out, but there in the second half we got in the flow. We passed the ball better more than anything.”

Baxter finished with 6 points, starting when he followed Green’s first two buckets with a go-ahead layup for an early 6-4 lead.

Elliott then answered a Zach Wicker 3-pointer with his first triple to make it 9-7, but Seymour (0-10, 0-3) regained a 13-10 advantage after the first quarter and didn’t trail again until Elliott and Green combined to hit 3 foul shots just before halftime for a 26-23 lead at the break.

Swann had tied the score at 15 and at 23 with his first two 3-pointers.

“We just have to start off with the full energy we had in the second half, especially in the fourth quarter,” Elliott said. “We’ve got to stop waiting until the second half to start playing our hardest when we realize we’re down. We have to start at the tip-off and keep it going from there.”

Jake Robinette, who went 6-for-6 from the charity stripe in the fourth quarter aided by a CCHS technical foul, led the Eagles with 11 points. His 3-pointer in the second quarter gave Seymour a 20-15 lead, but Elliott made it a 20-19 game when he sank a 3-pointer while being fouled for a four-point play.

Parker Aranas, Robinette, Dallas Tucker, and Avery Bryson respectively hit a field goal to open the third quarter as Seymour quickly regained the lead at 31-26. But the Eagles could score only once more until the clocked ticked under four minutes in the game, coming when Bryson knocked down a 3-pointer.

Aranas finished with 8 points for the Eagles and Bryson had 7.

“Speeding the game back up has helped a lot,” Evans added.