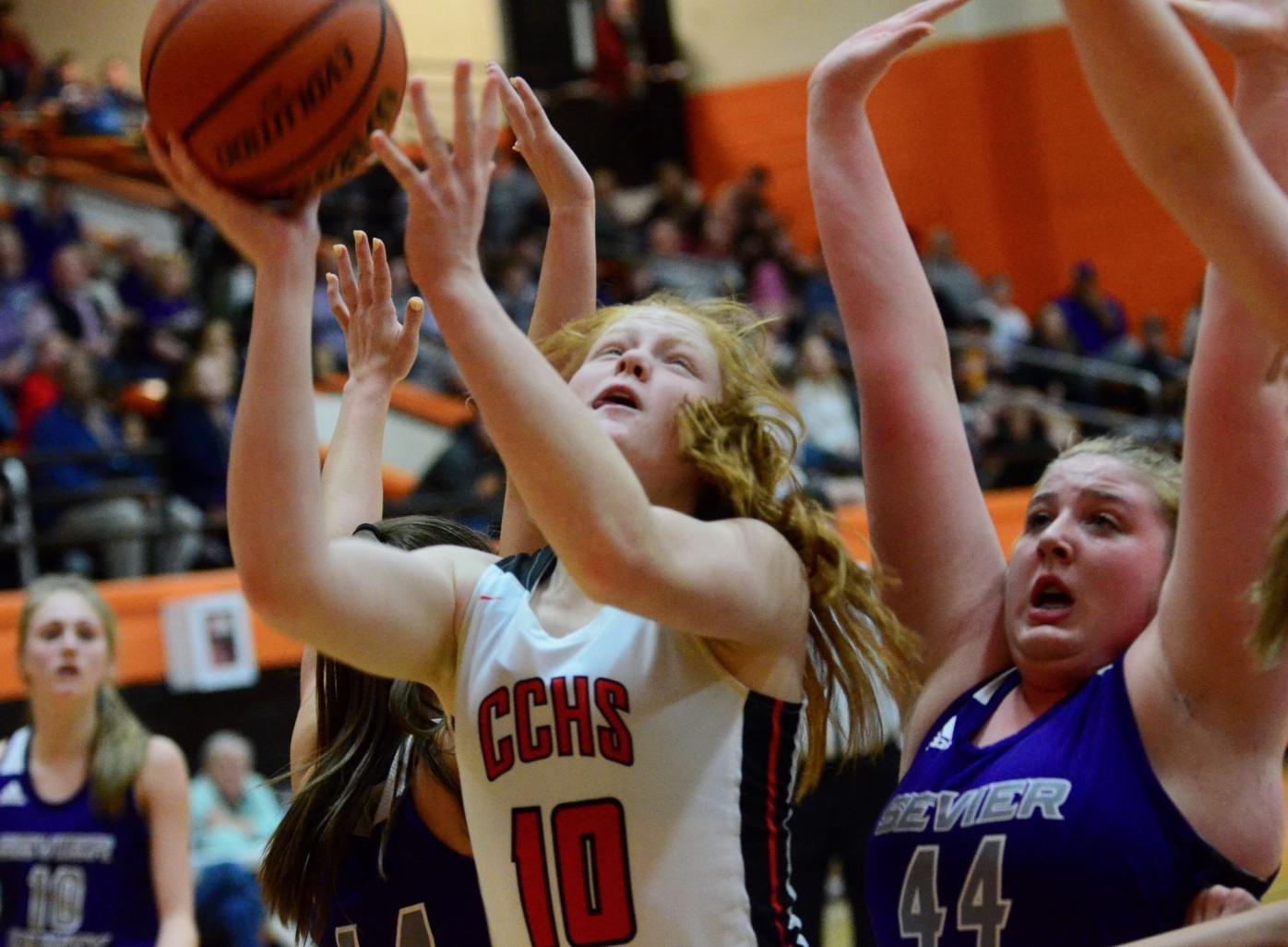 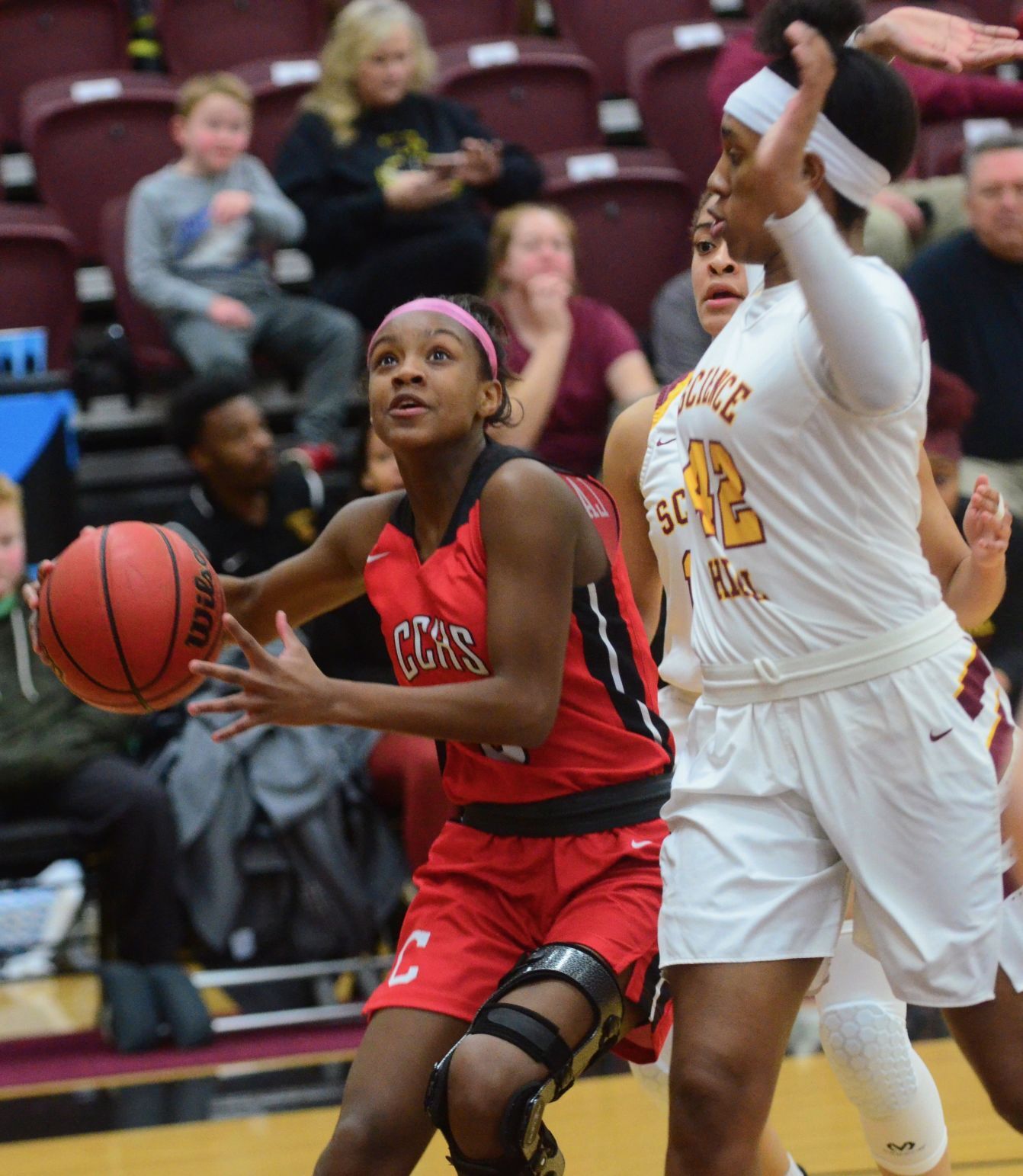 FILE — CCHS guard Jaylen Cofield drives to the rim during the Region 1-AAA quarterfinals at Science Hill in 2020.

FILE — CCHS guard Jaylen Cofield drives to the rim during the Region 1-AAA quarterfinals at Science Hill in 2020.

PIGEON FORGE—The Cocke County Lady Red are getting back to where they want to be.

That was evident again on Monday night, as a first-half scoring onslaught paved the way to a 68-48 victory on the road at Pigeon Forge.

Cocke County (8-6) took a 32-point lead into the half, and merely managed the final 16 minutes to cruise to a 20-point road win over the Lady Tigers.

Paige Niethammer led the Lady Red in scoring with a game-high 19 points. She was one of two players to reach double figures for CCHS, as Sydney Clevenger had a 16-point outing of her own.

Pigeon Forge (6-8) was led by a trio of players that reached double figures in scoring. Ana Naas led the Lady Tigers with 14, while Sarah Teaster added 12 and Halle Hensley finished with 11.

All season the Lady Red have strived to be a team that plays fast and puts up points in a hurry. In their last two outings, they’ve gotten back to that identity.

After serving a 10-day suspension of activities due to COVID-19 complications in early December, CCHS had been limited to under 50 points in five of their next seven outings. In their last two, they’ve now averaged 65 points per game.

Cocke County opened the night with a 21-point effort in the first quarter. Clevenger led the early start with 10 points, including a pair of makes from 3-point range. Fellow junior Camryn Halcomb buried a 3-point basket of her own, as she had five points at the end of the frame.

The Lady Red made three shots from behind the arc in the first, giving them an early 21-7 advantage. But it was Niethammer that went to work in the second to expand the lead.

Niethammer was limited to four points in the first eight minutes. She broke free in the second period, putting up 12 points to have 16 at the break. Pigeon Forge simply had no answer for the Lady Red’s sophomore post player.

Gracie Gregg and Halle Kitchen kept Cocke County’s 3-point shooting exhibition going in the lead-up to the half, as they sunk a shot apiece from behind the arc to bring the team’s 3-point total to four at the break.

By night’s end, the Lady Red would knock down seven 3-pointers, with Clevenger leading the team with four of them.

Cocke County led 46-14 at the break, holding Pigeon Forge to single digits in each of the first two frames.

The Lady Tigers would cut into the Lady Red’s lead in the second half, but not by nearly enough.

Cocke County maintained a 59-28 lead at the end of the third, and again held Pigeon Forge to single digits in the fourth to finish off the 20-point victory.