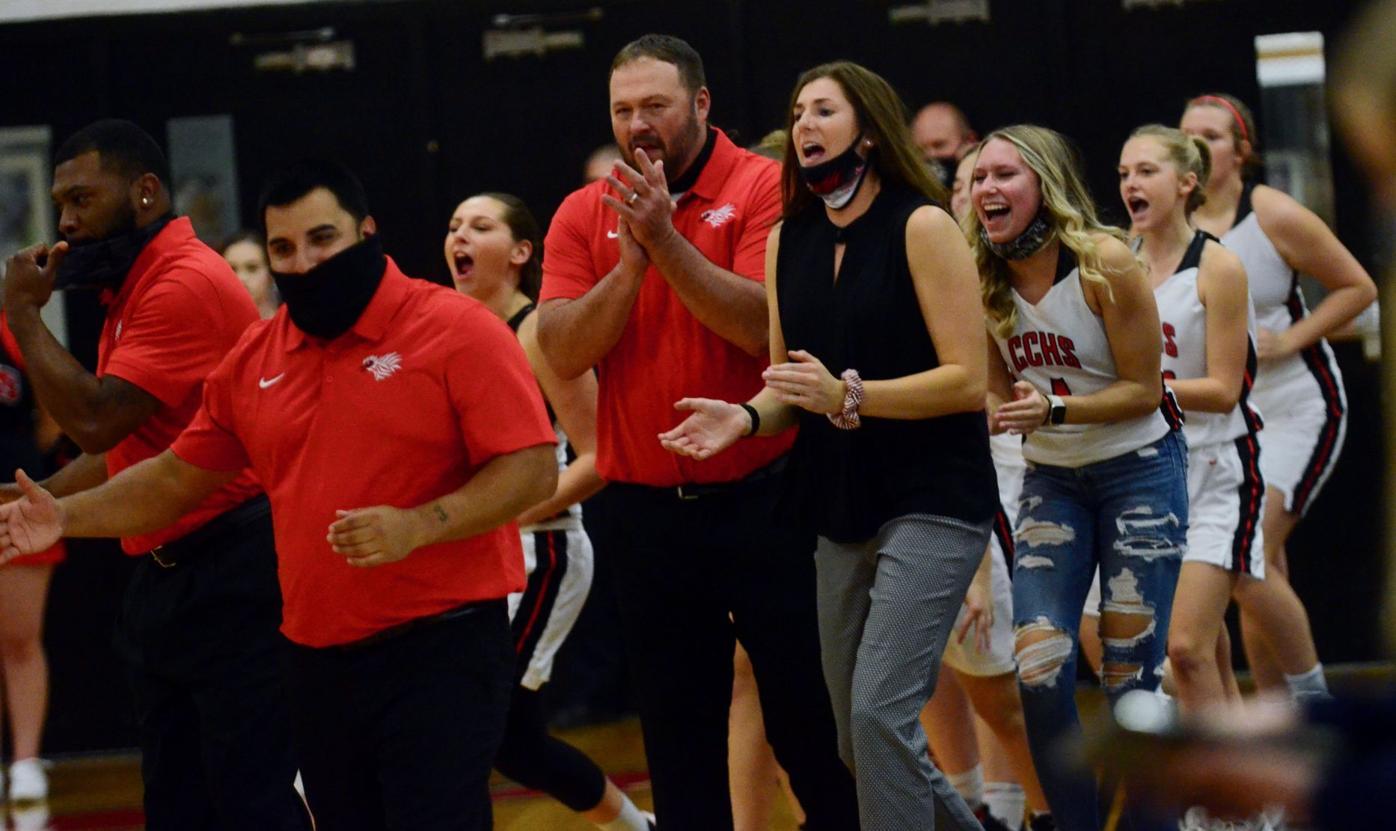 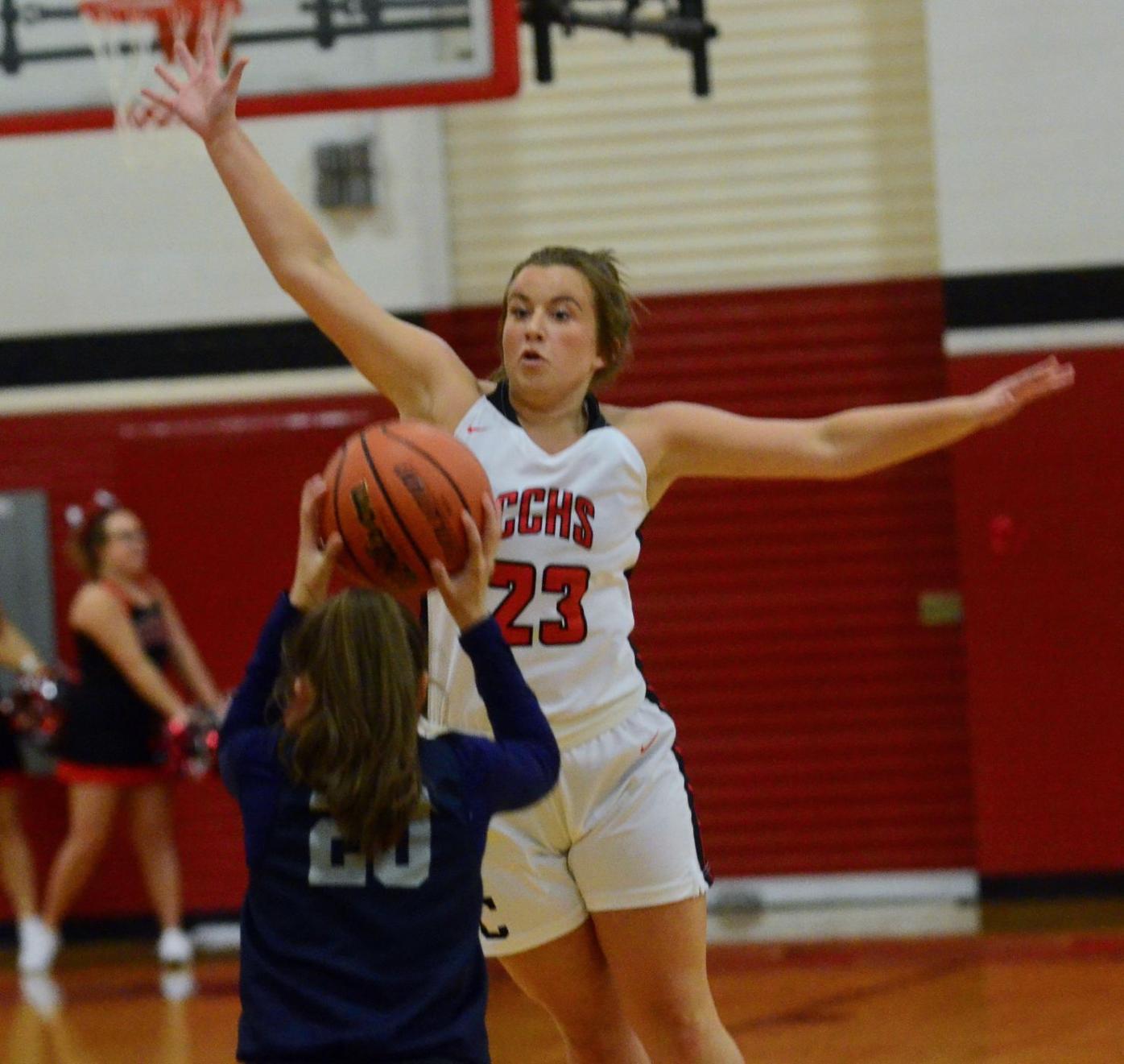 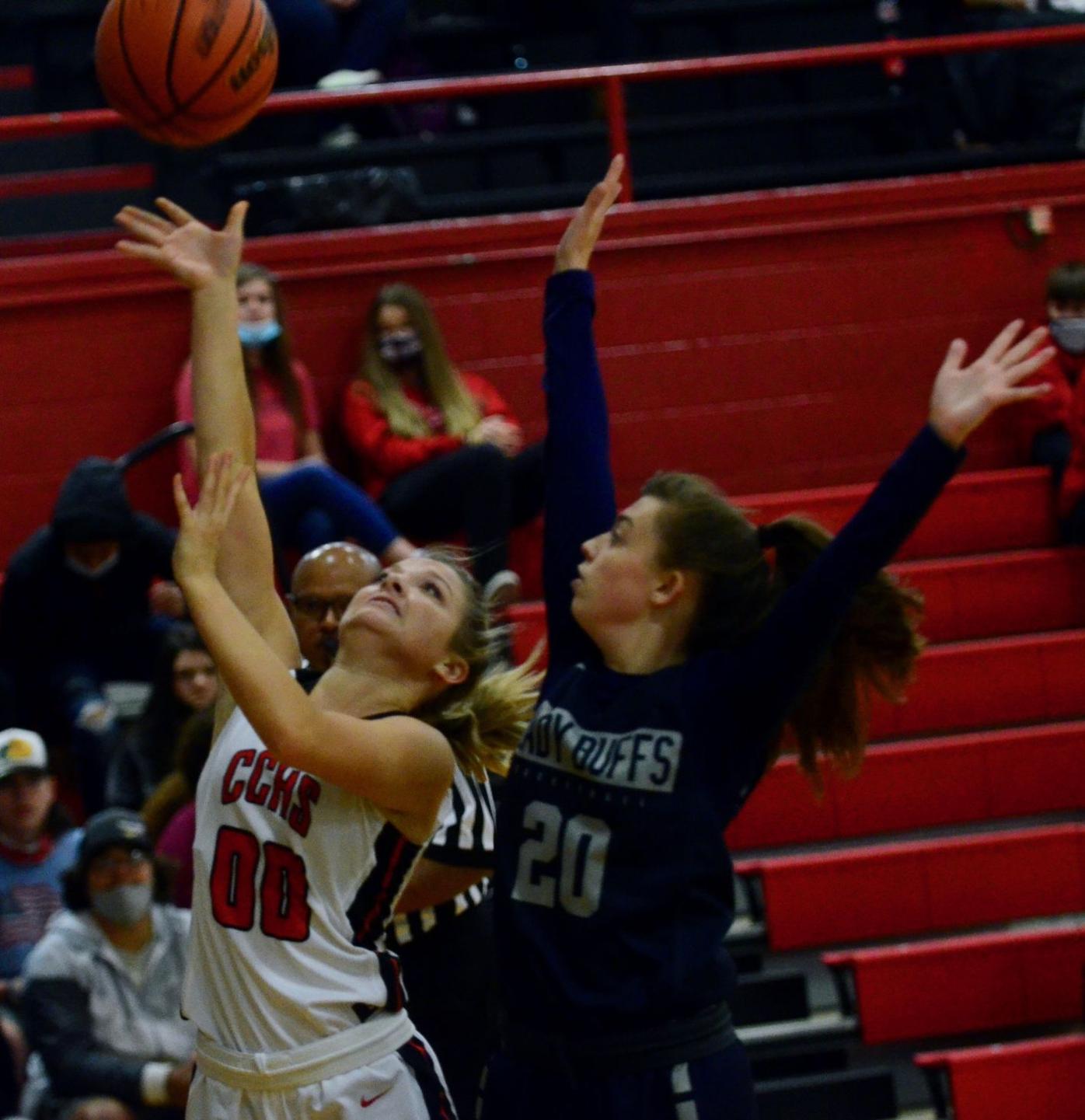 CCHS junior Sydney Clevenger (00) goes up for a layup while defended by West Greene’s Christianna Ricker on Tuesday night. 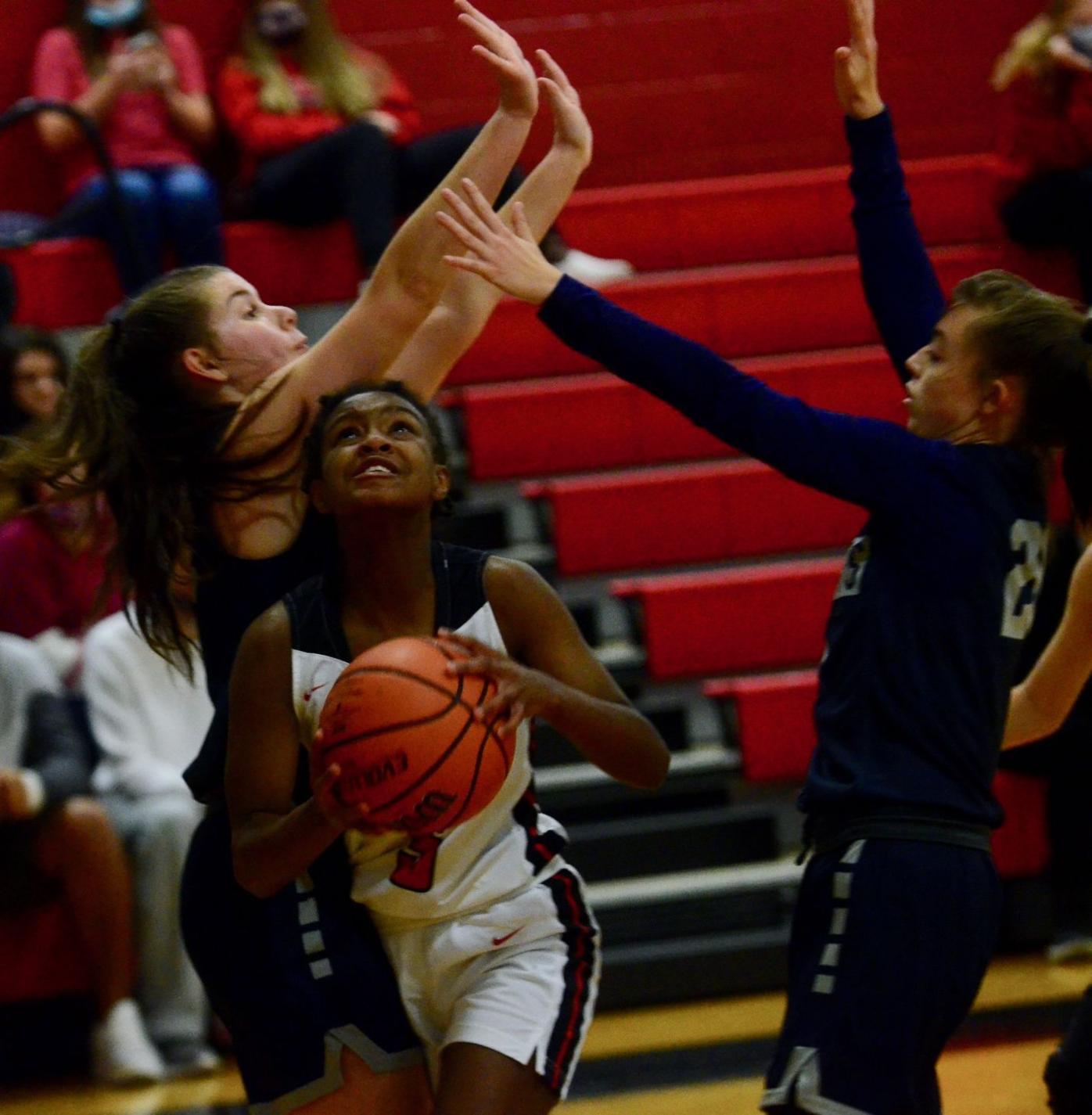 Cocke County junior Jaylen Cofield (center) splits a pair of West Greene defenders to muscle up a shot at the rim on Tuesday.

CCHS junior Sydney Clevenger (00) goes up for a layup while defended by West Greene’s Christianna Ricker on Tuesday night.

Cocke County junior Jaylen Cofield (center) splits a pair of West Greene defenders to muscle up a shot at the rim on Tuesday.

NEWPORT—The start to the Chris Mintz could be described in many ways.

Exciting and explosive seem to be the two best words to sum it up, though.

Coaching his first game with the Cocke County High Lady Red on Tuesday, Mintz’s crew erupted with a hot start to claim a 90-49 victory over West Greene.

“The girls played really hard, and I’m proud of that,” Mintz said. “They pushed the ball and did a lot of things we’ve been working on in practice. Finally getting to let loose against somebody else was pretty fun to watch.”

Cocke County (1-0) had 61 points at the half, as a scoring barrage never left the outcome of its season opener in doubt. The Lady Red were exceptional in their long-range shooting throughout the night, as well, sinking eight shots from behind the arc in Tuesday’s victory.

After falling behind by 25 at the half, West Greene (0-1) drew no closer the rest of the night. The Lady Buffaloes did, however, use a third-quarter run to at least frustrate a Lady Red team that had been dominant up until that point in the evening.

“We had way too many turnovers, and our help-side defense in our man-to-man sets was lacking,” Mintz said. “That’s something we work really hard at. There were times we just lost where we were at on the court, and that’s something we’re going to go back and work on.”

Nonetheless, Tuesday night’s season debut was a success for the Lady Red, even though their coach sees areas to improve on as the season goes along.

The Lady Red’s first two baskets came off turnovers, which set the tone for the night. As a team, they forced 42 turnovers, constantly applying pressure on West Greene and forcing it into mistakes.

“That let them get some confidence early on,” Mintz said. “They kept the pressure up and made shots on the other end. We give up a lot of size, so we have to make up for it in other places. Getting people to turn the ball over and allow us to get out in transition is part of our identity.”

It took West Greene two minutes to find its first points of the game. It wasn’t until 3:30 left in the first quarter that it would finally score again.

During that time, CCHS built a 14-2 lead, continuing to feast off of mistakes by the Lady Buffaloes.

Cocke County finished the first period on a 10-0 run, taking a 26-6 lead into the second.

Paige Niethammer had a solid debut to her sophomore campaign on Tuesday. With 11 points in the opening frame, she’d go on to finish the night with 22 points. She was one of four to finish in double figures for the Lady Red.

“I knew she was going to be special,” Mintz said. “She’s been so dominant in practice, and she brought that to the game floor tonight.”

She continued her scoring onslaught into the second quarter, upping her points total to 20 by the half. The Lady Red as a team weren’t starved for points, as they too continued to light up the scoreboard with a 61-26.

Nine different players posted scoring figures for the Lady Red by the break, as Mintz reached into his rotation early to get his bench involved in the fun.

West Greene was able to change the pace of the game to start the second half, allowing it to cut the Lady Red’s lead down to under 30 with 3:00 left in the third, on the heels of an 11-0 run.

Displeased with the effort to start the second half, Mintz pulled all five starters to get them refocused.

“We tried to back up and slow things down a little,” Mintz said. “But it seemed like our girls stayed in the locker room and felt they already had the game won. I wanted to get them out of that mindset of letting up. I wanted them to finish just like they started.”

Halle Kitchen snapped Cocke County’s scoreless drought, burying her third 3-pointer of the night. An impressive freshman debut, and coming off the bench, she finished the night with 16 points.

“Some days she shows that in practice and lights it up,” Mintz said. “She’s already a really good player, but when she gets hot she’s tough to stop.”

Despite allowing the Lady Buffaloes to get within 27 of the lead, CCHS moved the margin past the 30-point plateau once more.

With a re-energized effort in the final minutes of the third, Cocke County carried a 78-41 advantage into the fourth.

With a running clock in effect, Mintz dug deeper into his bench to close out the victory. The Lady Red went on to secure a 90-49 win on the opening night of their season.