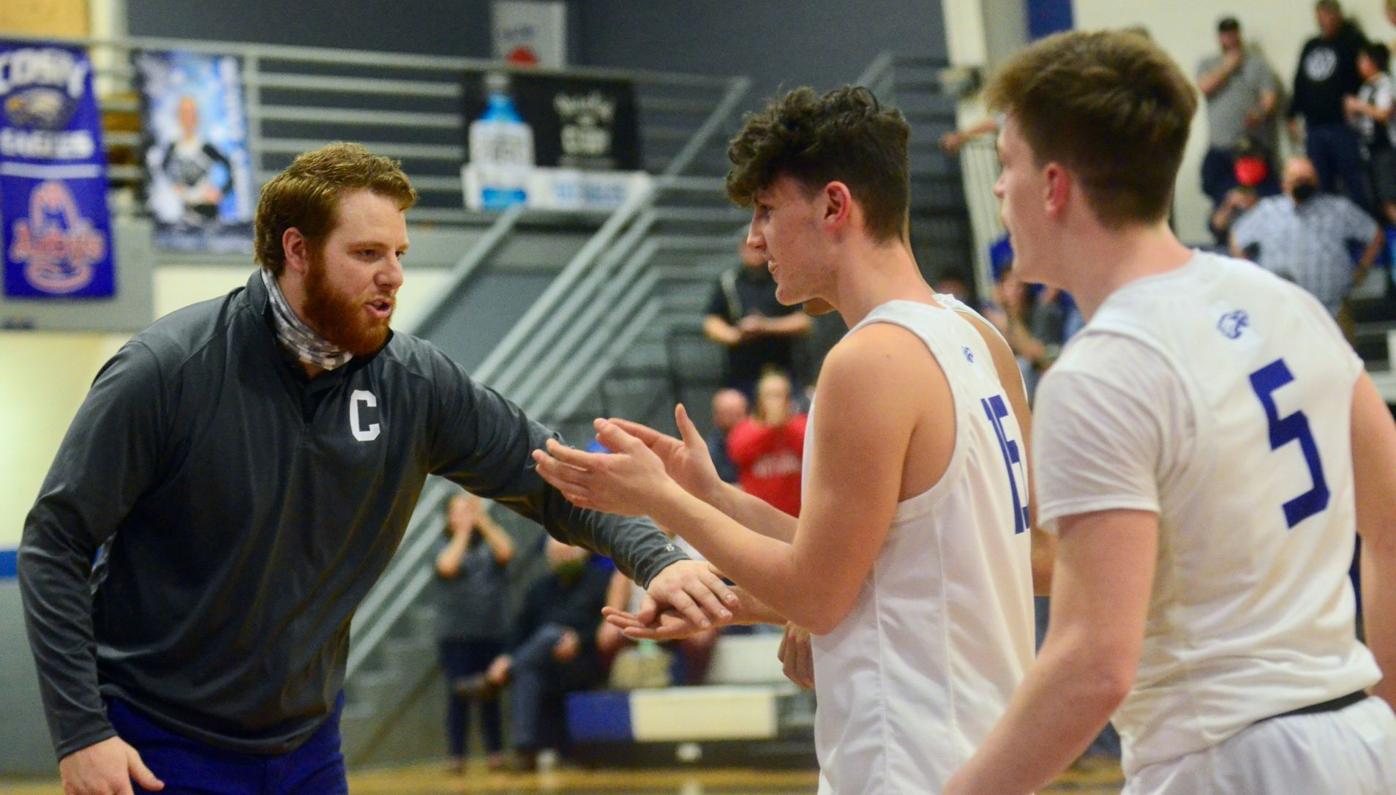 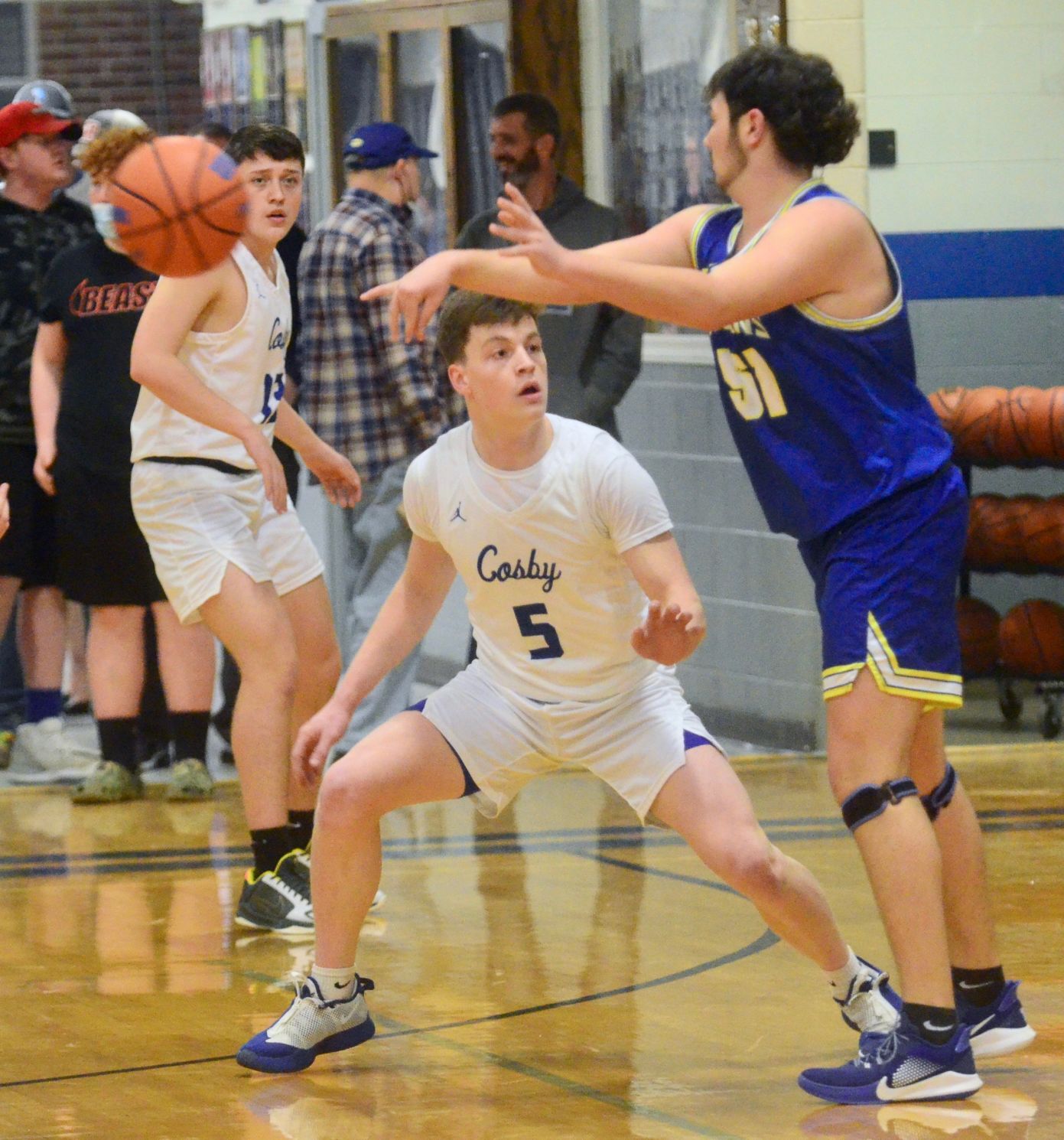 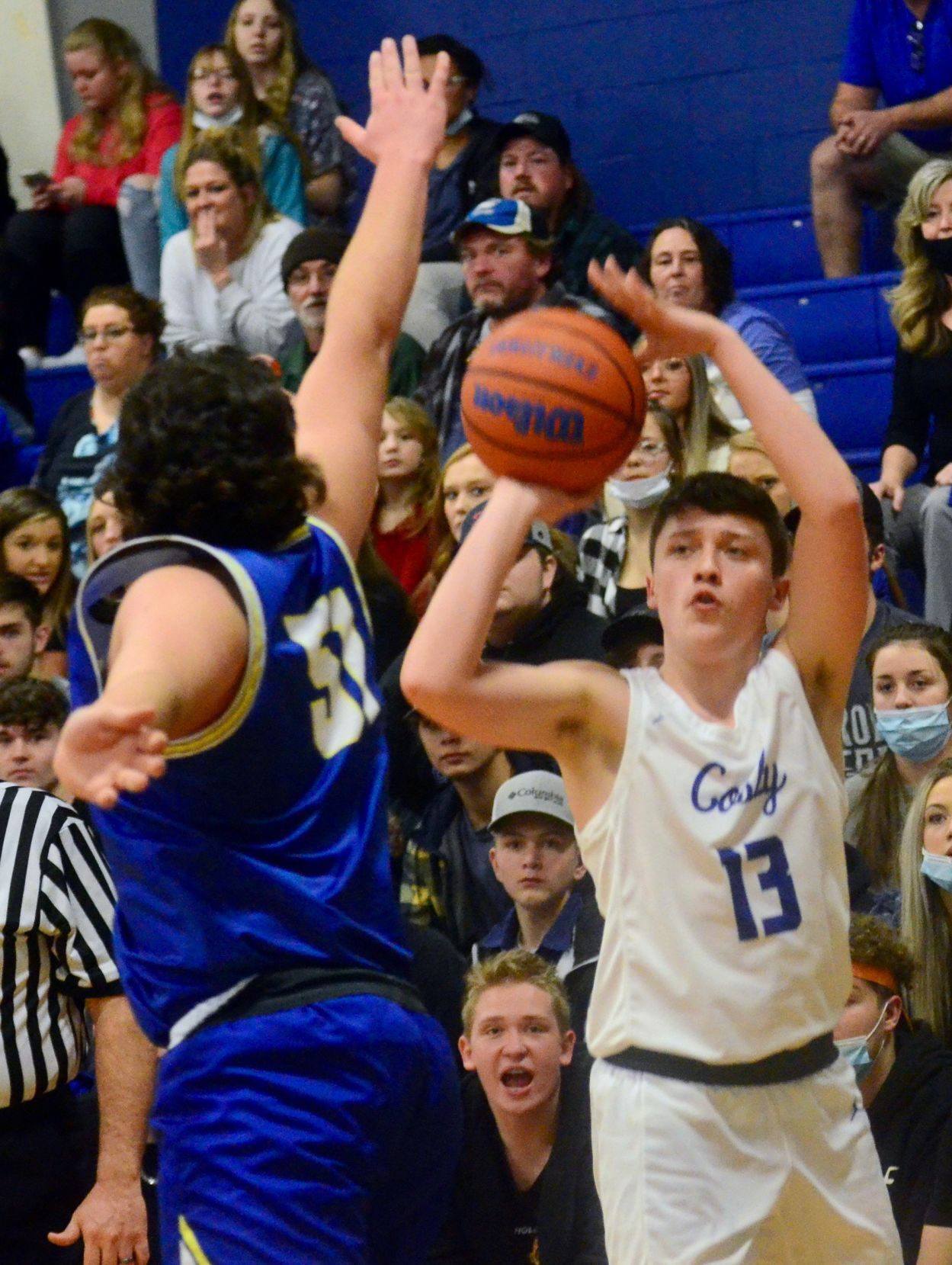 Paxton Coggins (13) puts up a three over the outstretched arm of a Hancock County defender during Tuesday’s District 2-A Championship game. 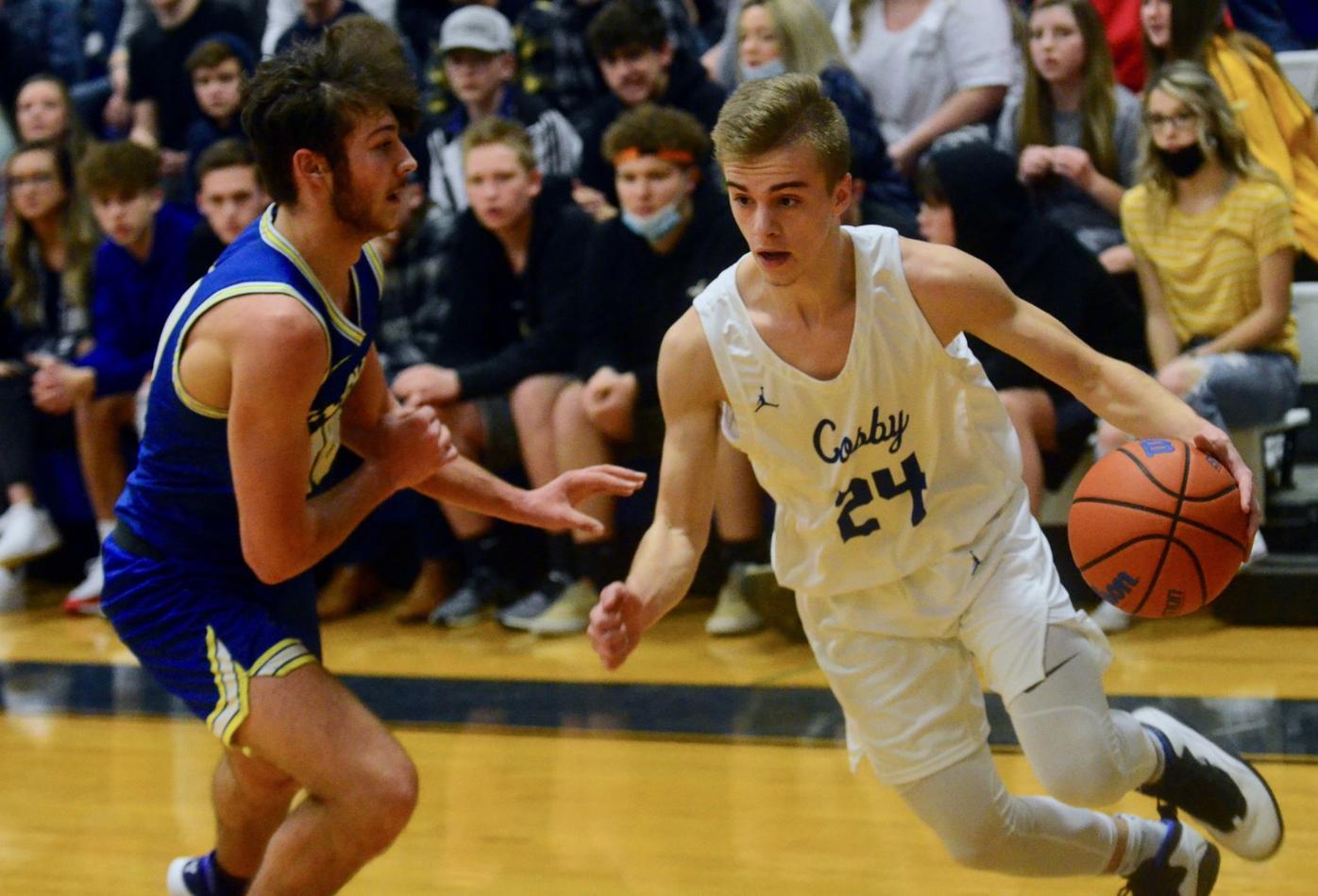 Paxton Coggins (13) puts up a three over the outstretched arm of a Hancock County defender during Tuesday’s District 2-A Championship game.

COSBY—When Riley Galler had to leave the game in the second half due to foul trouble, the Cosby Eagles faced a decision-making moment that would be seminal in their district title defense.

Battling a Hancock County Indians team that had three big men it could put on the floor at any time, second-year head coach Kurt Brooks opted to roll the dice and go small to force the tempo.

Cosby put five guards on the floor at one time for most of the third quarter, putting the task on an undersized group to defend in the post for a six-minute stretch.

“We started working on going small early in the season a year ago,” Brooks said. “I didn’t like how we were giving up so many transition buckets, so we made the switch there to not play half-court defense anymore. We would be full-court all the time.

“With Riley in foul trouble, it forced us to play smaller. Our guys understood the challenge, and helped out in the post. As a collective group we did a good job of slamming it in.”

Naturally, Hancock County saw this as an opportunity and packed the ball into the paint on every possession it got. And while the Indians did cut a 12-point lead down to five with under four minutes left in the third, Cosby ultimately held its ground.

Since taking over the program ahead of last season, Brooks has clamored for his team to hit the weight room and learn to win games on physicality. On Tuesday night, they did just that.

Cosby stood strong on the defensive end all night, but its play during Galler’s time on the bench was the deciding factor in helping it hold a lead that was once as large as 17 points in the first half.

“From day one we’ve preached defensive toughness,” Brooks said. “I know you’ve got to score to win games, but we’ve won some games this year where we’ve held teams in the 30’s. There’s going to be nights we have to do that.”

Beyond that, the Eagles still had to find points if they were going to hold on for the win. As tough as their defense was, Hancock County would undoubtedly find ways to score with so much time left.

Cosby went scoreless through the first four minutes of both the third and fourth quarters, which allowed the Indians the chance to narrow the gap in the second half.

Mr. Basketball finalist Trey Johnson drew a ton of attention his way in the second half, after putting up 28 points in the first half. That meant someone else was going to have to step up and score to hold on down the stretch.

Corey Askew and Paxton Coggins both provided key baskets in both of Cosby’s wins over Hancock County in the regular season. So, it was only natural the duo took the spotlight when their team needed it most when a title was on the line.

When they buried back-to-back threes late in the third, they sunk the hopes of all of Sneedville once again.

“I’m not in any hurry to finish this year, but I am excited for the future of this program. And it’s because of guys like them,” Brooks said. “Outside of our four seniors, the majority of our roster hadn’t played a single minute of varsity basketball before this season.

“We’re a young team. We’ve got a slew of sophomores, and a freshmen class we’re excited about. I still want to enjoy this ride a little while longer, but I feel good about the future here.”

Askew put the final nail in the coffin with another three in the fourth, once again snapping a scoreless drought to start the period.

Lifts like the ones Coggins and Askew provided, as well as the decision to go outside of their comfort zone are what will carry the Eagles the farthest in the postseason.

Tuesday night won’t be the only time they’ll face similar adversity. Their willingness to think and do different is what will allow them to catch opponents off guard and continue on towards their quest for a state tournament berth.