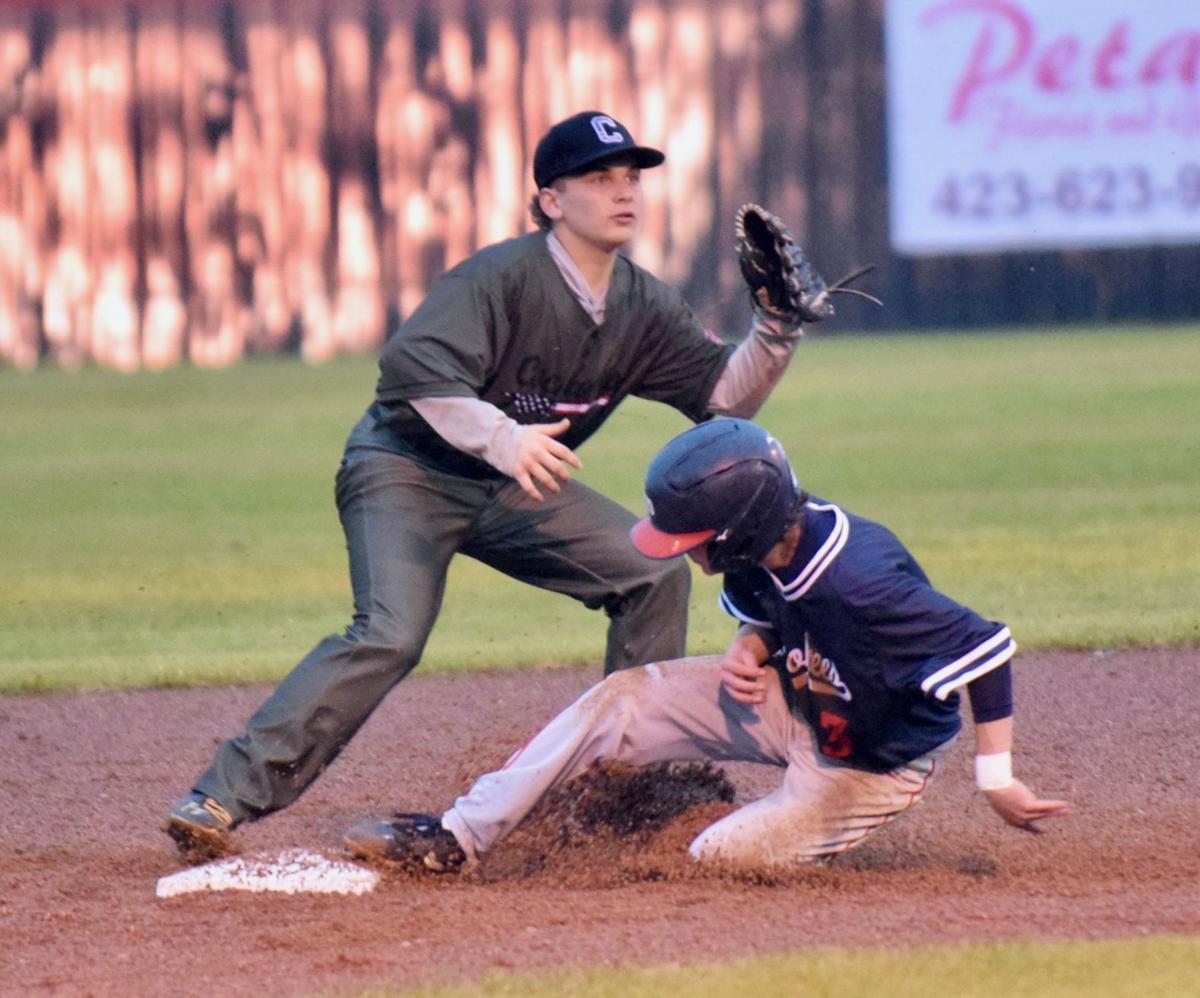 Cocke County’s Brayden Clark looks in a throw to second base during Tuesday’s district matchup with South-Doyle. 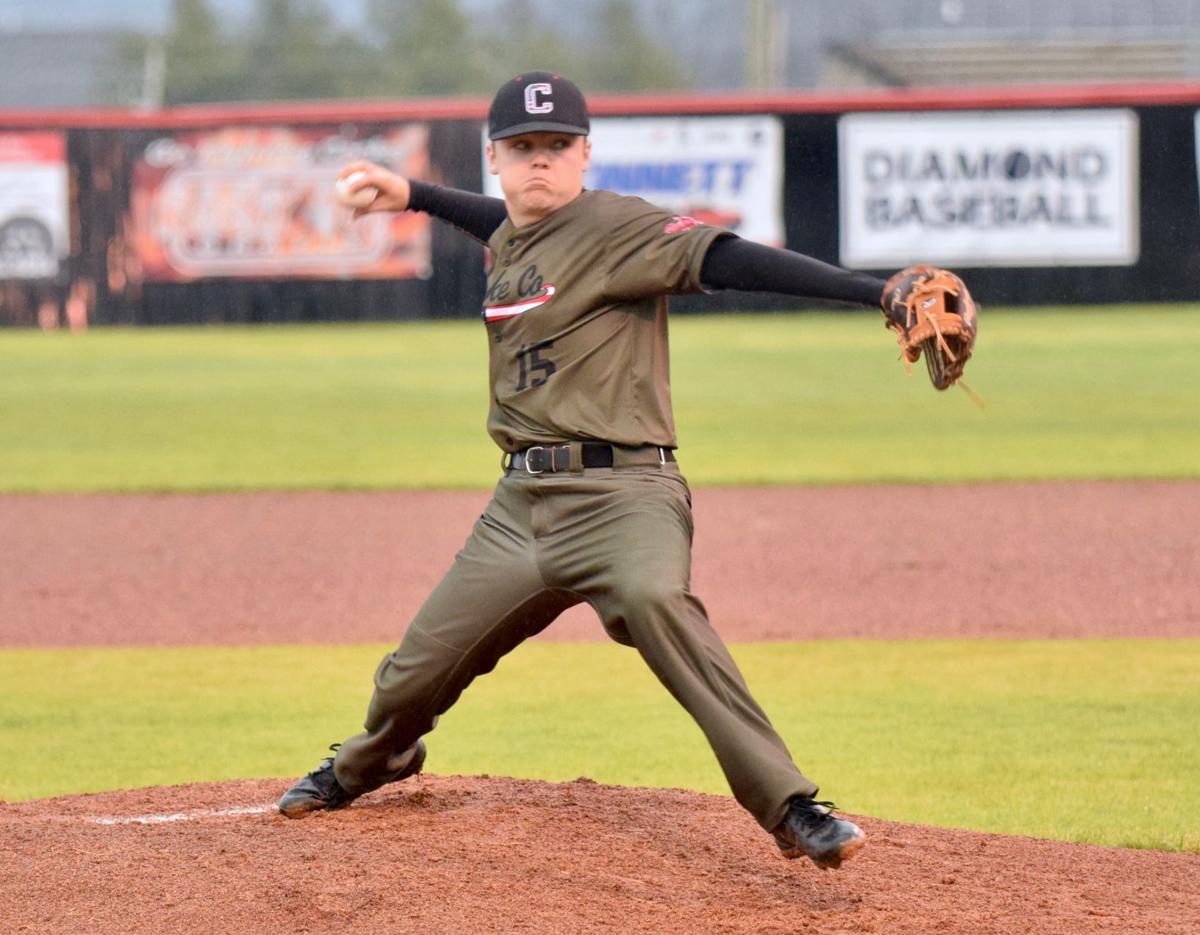 CCHS senior Bradyn Long sends a pitch to the plate during Tuesday’s home opener against South-Doyle. 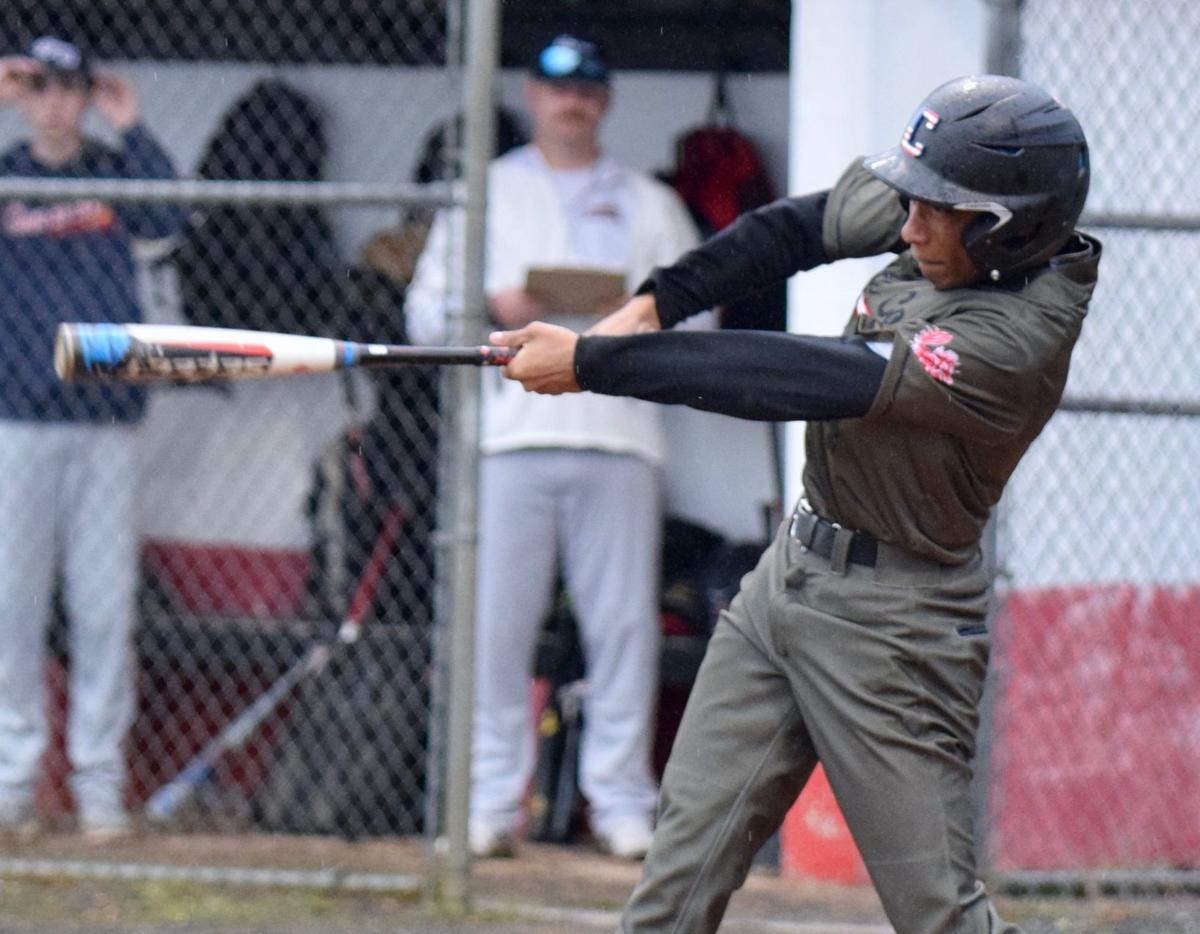 CCHS senior A.J. Mills takes a cut on a pitch during Tuesday’s district contest against South-Doyle.

Cocke County’s Brayden Clark looks in a throw to second base during Tuesday’s district matchup with South-Doyle.

CCHS senior Bradyn Long sends a pitch to the plate during Tuesday’s home opener against South-Doyle.

CCHS senior A.J. Mills takes a cut on a pitch during Tuesday’s district contest against South-Doyle.

NEWPORT—As soon as he ended Cocke County’s hitless streak, A.J. Mills stopped at third base and pointed toward the sky. Somewhere, former teammate McKayne Ramsey must have been smiling.

Mills helped rally the Fighting Cocks from a three-run deficit to tie the game, but two costly errors stood between CCHS and its first victory. Thanks to two unearned runs, South-Doyle claimed its second straight one-run win over Cocke County with Tuesday’s 7-6 triumph.

Although it had scored three runs, Cocke County (0-2, 0-2 District 2-AAA) still hadn’t recorded a hit through the first 5.1 innings. Three batters into the sixth, Mills stepped to the dish after Zeke Ramos had taken ball four. Mills then crushed a one-out triple into deep right field, giving pinch runner Josh Ellis time to round the bases and make it a 6-4 game.

Hunter White then sent Mills home with his RBI line-drive single to left. And when White stole third, an errant throw on the pick-off attempt allowed him to cross home plate standing up, tying the game 6-6.

“A.J. has been dealing with a lot. I think it says a lot about his heart and character,” CCHS coach Andy Chrisman said. “I already knew the heart and character of everyone on this team, but I think they’re showing everybody else what they’ve got.”

Braden Ott then took the mound for the Cherokees (2-0, 2-0) and kept the score tied through six innings. And in the seventh, Ott reaped the benefits. Stover Evans lined a single to right, and a fielding error helped South-Doyle load the bases with one out. Ott then sacrificed himself to left field, sending Evans home for the eventual game-winning run with two outs.

Bradyn Long drew a leadoff walk to begin the seventh for CCHS, but Ott retired the next three batters and finished the game with his third and fourth strikeouts.

South-Doyle had scored another unearned run just one inning earlier, aided by a two-out fielding error. Creed Werker made CCHS pay with his RBI ground-ball single, giving the Cherokees a 6-3 lead in the sixth.

“They did the small things a little bit better than us yesterday and today,” Chrisman said. “We’ve got to do a better job on defense if we’re going to get over that hump that’s left us one run short on back-to-back days.”

Despite not giving up an earned run, Bryce Click got the loss after pitching the final 2.1 innings. Click surrendered two hits and struck out one.

Click also recorded Cocke County’s first RBI, hitting into a fielder’s choice which allowed David Stinnett to break the scoreless tie in the first. Stinnett wore a second pitch in as many at-bats two innings later, and he then stole third where a throwing error allowed him to score for a 2-1 CCHS lead.

Click drew a leadoff walk in the fourth and scored on a two-out passed ball, cutting South-Doyle’s lead to 4-3.

“He’ll be throwing a lot more for us this year and the next couple of years,” Chrisman said of Click. “He’s got a really good breaking ball and good movement on his fastball. Even in tough conditions with it being slippery and the rain coming down, I thought he did a good job commanding his pitches and mixing up his pitches.”

Long got the start and pitched four complete innings, striking out seven and allowing four hits. But he did keep South-Doyle hitless through 2.1 innings.

But the Cherokees put up a three-spot in the fourth to grab a 4-2 lead. Noah Carr bunted a single while Mason Chandler and Charlie Gillenwater both drew walks. All three of them crossed home plate during wild pitches.

Luke Vest hit a one-out single in the third inning and tied the game 1-1 on Bennett Fowler’s line-drive single. Werker, who fanned seven and pitched four no-hit innings to start the game, batted 2-for-3 with an RBI to lead South-Doyle at the plate. Evans went 2-for-4 with Vest, Fowler and Carr each collecting one hit.