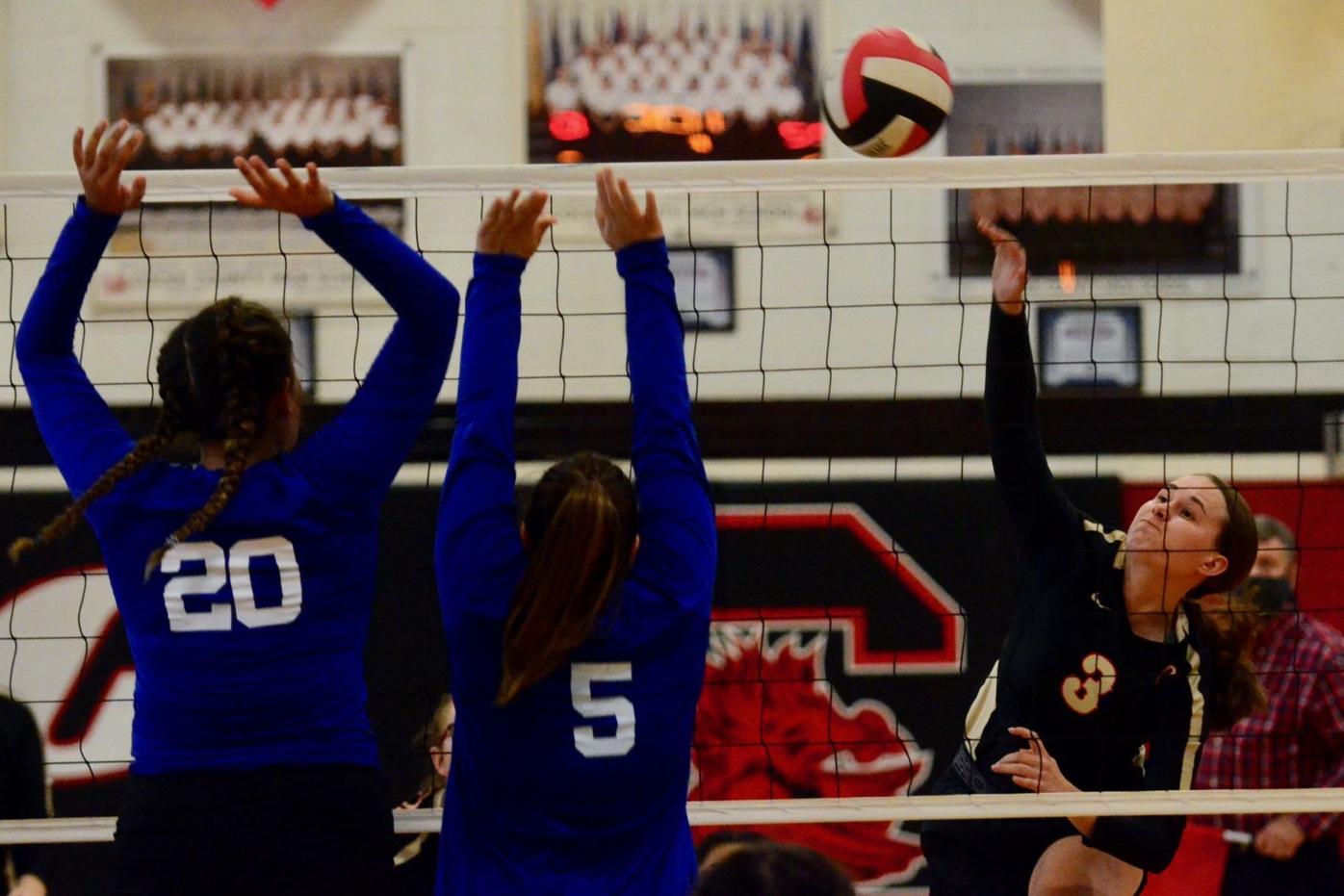 Cocke County’s Keely Clevenger (3) spikes the ball over the net during Thursday’s victory over Cosby. 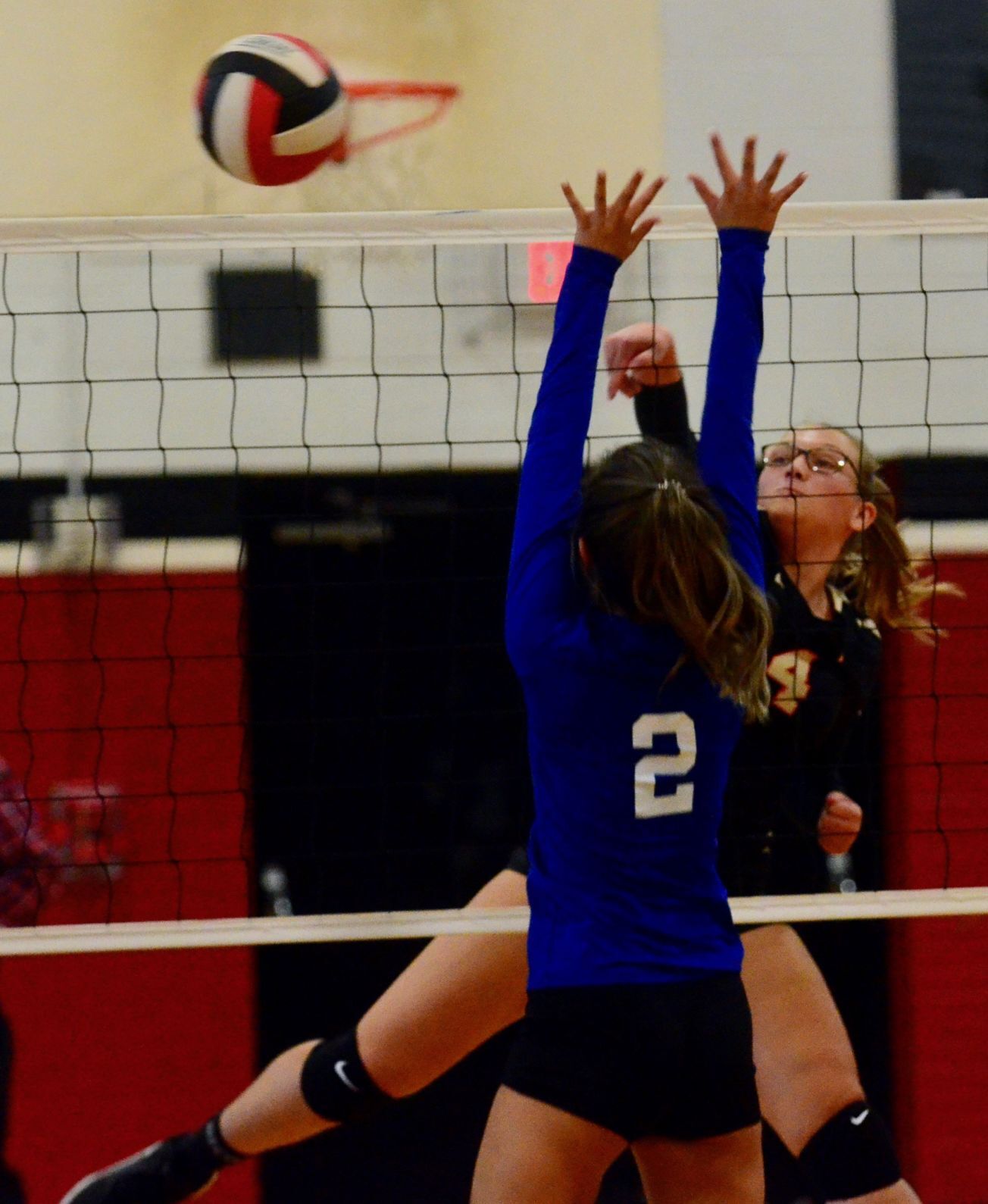 Cocke County’s Jensen Gregg (4) spikes the ball over the net in Thursday’s victory over Cosby.

Cocke County’s Keely Clevenger (3) spikes the ball over the net during Thursday’s victory over Cosby.

Cocke County’s Jensen Gregg (4) spikes the ball over the net in Thursday’s victory over Cosby.

NEWPORT—Cross-county rivalries bring out the best in both teams.

That was especially true for the Cocke County High Lady Red on Thursday.

After posting an historic district victory over Morristown West on Tuesday, the Lady Red finished the week unbeaten with a win in straight sets over inter-county rival Cosby on Thursday (25-11, 25-7, 25-14).

“I just wanted them to come out and play their game. Just have fun and be themselves.” CCHS coach Jamie Messer said.

The Lady Eagles, however, were coming off a short hiatus entering Thursday’s match. It was just the program’s second outing in two weeks after former head coach Patrick McLaughlin stepped down as the team’s head coach.

“We’re going through a learning process,” Cosby interim coach Kim Dykes said. “We’re trying to get ourselves together and build back. We’re strong, but not confident at the moment.”

Dykes was an assistant with the program to begin the season, and has assumed the role as the team’s leader with the departure of McLaughlin.

In the first set the Lady Eagles set the tone early, led by Gracie Johnson and Lexie Barnes.

That didn’t last long, though, as the Lady Red took advantage with strong serves behind four straight aces from Annie Wardroup.

As the lead grew, the Lady Eagles struggled to find answers on the defensive side.

Sarah Conard extended Cocke County’s lead to 9-4 with three consecutive kills. The Lady Red held serve early, as Jensen Gregg finished off the first set with three kills of her own to finish a 25-11 win in set one.

Cosby went into the second set with hopes of knotting up the match, but a slow start stalled that comeback.

Wardroup started off the second set with an ace to give the Lady Red a 4-0 advantage over the Lady Eagles. Maddie Williams made her presence felt when she sparked another surge for Cocke County, adding a kill that was followed up by an ace from fellow teammate, Keely Clevenger.

The Lady Red scored four-straight points before Kynslee Dykes with an ace halted their run.

Kynslee Dykes’ ace provided some energy to her team but it wasn’t enough in the end of the second set. Sarah Seay served three straight aces and gave an extra push for the Lady Red, as they took the second set 25-7.

The third set started somewhat the same as the second. Abigail Erby put the first points on the board with her kill, followed by two-straight aces from Wardroup.

Despite CCHS running out to another large, early advantage, the Lady Eagles responded to keep the third set from being a one-sided tilt.

Kynslee Dykes scored her first kill of the set to give Cosby a fighting chance, but offensive mistakes for the Lady Eagles benefited the Lady Red.

Williams scored her first ace of the match to extend Cocke County’s lead to 17-3.

Ultimately, Cocke County would go on to prevail with a clean sweep over its inter-county rival, as it posted a 25-14 in the match-deciding set to get the 3-0 win to cap off a successful week.

“I feel like our team as whole performed really well tonight,” Messer said. “They were perfect with their serves, their defense, it was a great team effort.”

Kim Dykes spoke very highly of her team’s progression following the loss to Cocke County and outlined plans to get the program back on track after a two-week absence from competition.

“They’re learning to play with one another and I believe they’re going to be stronger in the future.” Dykes said. “I’ll develop some drills on where we can improve on, keep our heads up, and just move forward.”

Both teams return to action and will be on the road on Monday. Cocke County will be at Sevier County, while Cosby will traverse to Pigeon Forge for matchups to start the week.